Pacific Poke, 5549 Richmond, softly opened December 17. Owner Andre Mercado is bringing the trendy poke and some of its fellow Hawaiian dishes to the Galleria area. A grand opening is still in the works, according to the restaurant's Facebook page.

Poke started out as a Hawaiian fisherman's snack and has now migrated to the continental United States and beyond, giving sushi lovers a tropical option for raw fish. Poke is usually made with cubed salmon or tuna with a choice of toppings and salad vegetables.At Pacific Poke, diners can create their own bowls. For those who don't need more decisions in their lives, try a signature bowl.

Besides poke, the new restaurant offers dishes like a Hawaiian burger with grilled pineapple and spicy aioli or seafood choices such as Maui shrimp and blackened salmon. And for real Hawaiian comfort food,there's the Loco Moco, a yummy concoction that starts with a beef patty topped with two fried eggs over rice, then smothered with gravy. Onolicious!

For Instagram devotees and selfie queens and kings, there's a Hawaiian-themed "selfie wall" by Cypress artist Leah Hereford, also known as the Mural Mule. Hereford has done murals around town, including one at Jaxton's in Cypress.

Siu Lap City, 2808 Milam, softly opened December 18. Mimi and Cho Woo operated the much loved and much craved Long Sing Supermarket, which closed in July 2017, as we reported here in the Houston Press. Now, their daughters have opened Siu Lap City using the same family recipes.

Long Sing was popular for its inexpensive lunch boxes and barbecued meats. Those items are still on the menu at the new incarnation as are the drool-worthy hanging ducks and slabs of pork and beef. For more adventurous eaters, the braised organs and beef tripe can be bought by the pound.

Besides the barbecued meats by the pound, there are also whole Peking ducks ($21.95) and soy sauce chickens ($8.95) available. It makes you wish that Siu Lap City was on your drive home from work. A whole soy sauce chicken makes a better alternative than the grocery store roaster that's been drying up under a heat lamp. If you bring home the roasted pork with crispy skin to the fams, you will be a star.

Midtown and Downtown workers can enjoy the lunch specials at Siu Lap City for under ten bucks. The small plate comes in at $5.95, with a choice of one meat, but it's the large that you really want at $7.95. Choose two meats, steamed or fried rice, a veggie, and then add some hot chili oil or ginger onion sauce. For true barbecue carnivores, there's an option to add additional meat for a couple of dollars more. 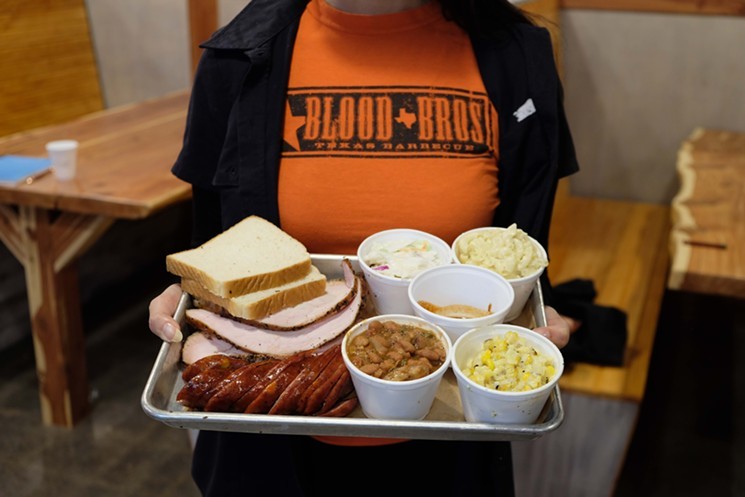 Blood Bros. BBQ has a permanent home.
Photo by Mai Pham
Blood Bros. BBQ, 5425 Bellaire Boulevard, opened December 20, ready to give Houston its spin on barbecued meat in its first brick and mortar spot. For the past several years, brothers Terry and Robin Wong, owners of Glitter Karaoke in Midtown, and pitmaster pal, Quy Hoang, have been serving up and dishing out big beef ribs, beef belly burnt ends with Korean gochujang and smoked brisket as a pop-up business around town.

You can read more about the recent opening here in the Houston Press. There's plenty of room at Bombshells.
Photo by Katheryn Mai

Bombshells, 13732 Interstate 10 East, opened December 19.  The military-themed sports bar and restaurant has a hangar like design and can seat four hundred patrons in its 8,900 square feet of interior space and the 3,000 square foot patio. With over a hundred hi-def televisions, free WiFi and servers (Bombshells) in brief military-style attire, it appeals to fans of spectator sports. The Bombshells  are inspired by the pin-up girls of WWII. Less Betty Grable, more Jane Russell. In fact, Ms. Russell appears on the menu, in sandwich form.

The menu is huge and includes all the sports bar favorites like wings and nachos, plus burgers, sandwiches, seafood, ribs and steaks. Happy hour is everyday from 11 a.m. to 7 p.m.

The I-10 location makes the fifth in the Houston area, with one in Dallas and one in Austin. There are three more Houston area stores planned in 2019. The next one is planned for Highway 249 in February, with the southwest Houston and Katy locations following soon.

Cloud 10 Creamery, closed its Rice Village location at 5216 Morningside this month and will open a new store at 3201 Louisiana, in the Mix at Midtown next week, according to CultureMap Houston. With the talents of pastry chef Chris Leung and the financial backing and entrepreneurship of Chris Balat, owner of Balcor Hospitality, the artisanal ice cream shop will see further expansion with a dedicated ice cream factory and a new location at 3502 S. Shepherd in early 2019. There is also a location in the Heights.

The expansion will allow Leung to create ice cream cakes for all three stores, ice cream cookie sandwiches made with freshly made cookies and an e-commerce site for shipping its ice cream.

La Mex, 3315 Ella, will open in the old Heights Cleaners space in late 2019, according to the Houston Chronicle. The restaurant comes from siblings, Zulema Gonzales, Dante Trevino and Briseida Trevino, whose parents, Eduardo and America Trevino, opened La Mexicana at 1018 Fairview in 1982.

Moviehouse and Eatery, is coming to Creekside Park West, according to Spring Happenings. The luxury dine-in theater will anchor the new retail development from the Howard Hughes Corporation and will be joined by shops and restaurants in the future, including outdoor dining and fountain seating.

The theater will feature 11 wall to wall screens, an extensive food menu and beverages, including a full bar, plus reserved recliner seating. There are five other locations around Texas. Fried chicken between two donuts is a real thing.
Photo by Lisa Gochman

Sam's Fried Chicken and Donuts, 601 Heights, is now the new name for Lee's Fried Chicken and Donuts, which has been acquired by Sambrooks Management Company. Along with the name change comes some new menu items and recipes as well. While favorites like the Double Donut Fried Chicken Sandwich will remain, along with doughnut icing flavors like the Mexican chocolate and praline bacon, new Breakfast Specialties such as Chef Lyle Bento's award-winning chicken and waffle wings, kolaches and new combo meals will be available. Also look for some Southern inspiration in the pork cracklins, boudin balls, chicken gizzards and chow-chow. My first pork cracklins were pulled off a roasted pig that my uncle had slaughtered. I was ten years old and I still remember that flavor. But, I digress. 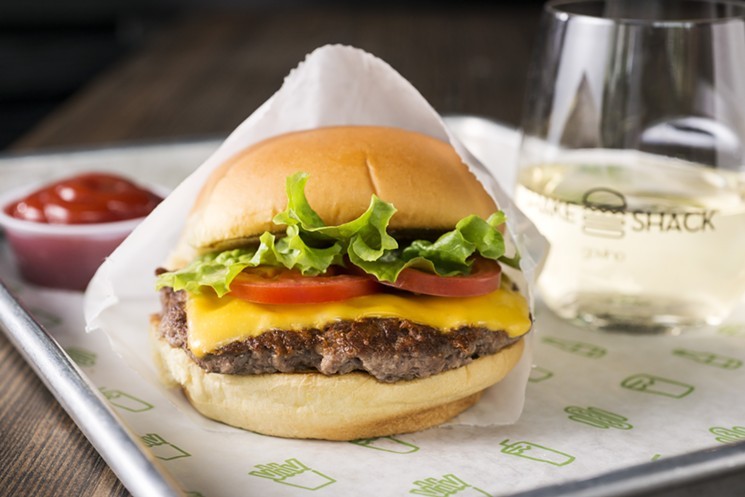 Photo by Evan Sung
Shake Shack, 1002 Westheimer, opened December 20. The rapidly expanding fast casual burger chain has locations over the United States and around the world. The Montrose store makes the third location in Houston. The first opened in the Galleria in 2016, followed by a second at Minute Maid Park in 2017.

The new burger spot has an outdoor patio and a mural done by local artist, Michael Rodriguez, whose work can be seen on a number of buildings in central Houston. Shake Shack also uses some treats from local purveyors like Fluff Bake Bar's seasonal pies and UB Preserv's carrot cake for their frozen custard concretes. There are also local brews on offer from Karbach, Spoetzl, Saint Arnold's and  Back Pew Brewing.

Island Grill does pizza right.
Photo by Becca Wright
Island Grill, 1701 Lake Plaza Drive, will open in the CityPlace complex at Springwoods Village in mid-2019. North Houston has seen some major development with the Grand Parkway's construction, the Exxon Mobil campus and a number of other companies choosing to set up base in the area.

Island Grill was founded by Faysal and Maria Haddad in 2000. There are currently four other locations in Houston. Faysal Haddad immigrated from Syria in 1982 and some of the Mediterranean dishes at the restaurant come from family recipes. Diners craving falafel, hummus and kebabs will find satiety here.There is an extensive menu and the eatery is open for breakfast, lunch and dinner. Omelets and pancakes start out the breakfast menu, with plates like The Ironman, which is made up of eight egg whites and Boar's Head turkey. Lunch and dinner offerings showcase the healthy Mediterranean-American cuisine and there are plenty of choices to keep a family or large group happy. There are sandwiches, salads, pitas, pasta and pizza. The crust for the pizzas are made with 00 Flour, which is commonly used in Italy. There is also a juice bar. A boomtown is being created north of Houston.
Photo by Slyworks Photography
The CityPlace Marriott and its SwitcHouse 'Plates and Pours' restaurant opened at the Springwoods Village location in November. Star Cinema Grill will open at the complex in the second quarter of 2019. 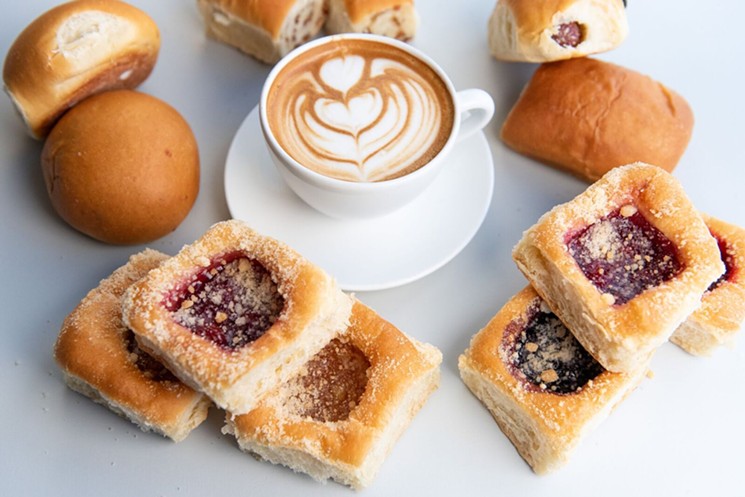 Kolache Shoppe satisfies your sweet and savory longings.
Photo by Carla Gomez
Kolache Shoppe, 1031 Heights Boulevard, opened December 18. Throughout December, the store will be open Tuesdays through Sundays from 7 a.m. to 2 p.m., except for Christmas Eve, when it will close at noon. It is closed for Christmas Day. Permanent hours and grand opening plans will be announced in January.


The Decatur Bar and Popup Factory, 2310 Decatur, is expected to open early 2019. The new restaurant/bar/work space comes from chef Monica Pope and Adam Brackman of Axelrad. The collaboration was originally to be named Vinegar Hill. The name has changed but the plan for operating with a rotating group of chefs is still the same. Molina's fulfills your queso fantasies with Jose's Dip.
Photo by Julie Soefer
Molina's Cantina, 6300 FM 1463, is slated to open in Fulshear late 2019. Molina's is the first tenant to sign on at Shoppes at Cross Creek, a boutique development off of the soon to be finished Westpark Tollway. It will occupy an end cap space and have a patio for outdoor dining and margarita sipping.

Molina's is the oldest family-owned and operated Tex-Mex restaurant in Houston. It's been around since 1941 and still uses the original chili con carne recipe from 77 years ago on the popular cheese enchiladas.
KEEP THE HOUSTON PRESS FREE... Since we started the Houston Press, it has been defined as the free, independent voice of Houston, and we'd like to keep it that way. With local media under siege, it's more important than ever for us to rally support behind funding our local journalism. You can help by participating in our "I Support" program, allowing us to keep offering readers access to our incisive coverage of local news, food and culture with no paywalls.
Make a one-time donation today for as little as $1.