Nickel City, 2910 McKinney, is coming to Houston in early 2023. The popular bar first opened in Austin in 2017 and made the list of Esquire magazine's "Best Bars in America" in 2018. This will be the third location for the Nickel City brand, which opened a second in Fort Worth in 2021. 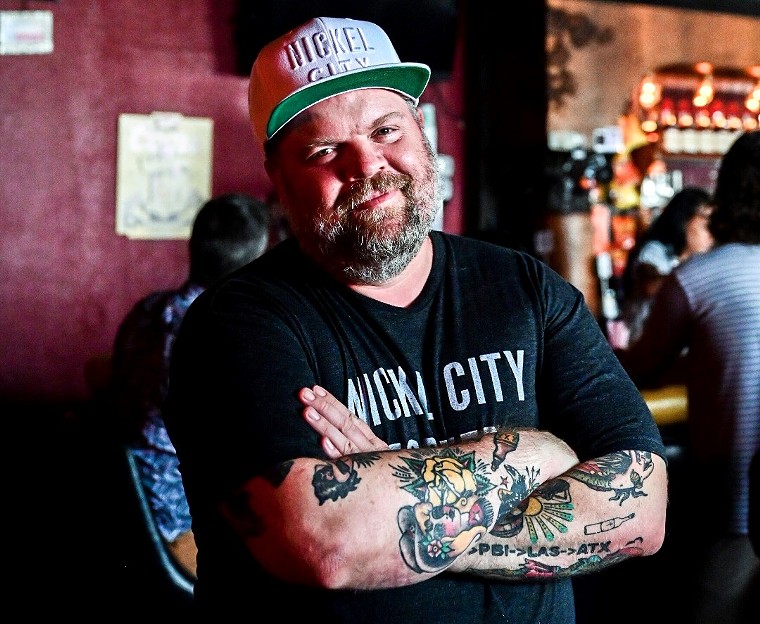 Travis Tober thinks Houston is "all that".
Photo by Consumable Content
The  concept is the brainchild of co-owner Travis Tober and the "rust belt chic" ambiance was inspired by Tober's hometown of Buffalo, New York. He is excited to bring Nickel City to Houston, a city he feels "is one of, if not the best Food and Bar cities in the United States." The overall feel is that of a neighborhood hangout with a better selection of spirits.

Co-owner Craig Primozich will oversee the design and construction of the Houston location, which will be located in a 1940s warehouse in East Downtown. The 3,200 square foot space's interior will be designed by Lizzy Bufton and Stephanie Russel of Taft Studio.

The Red Chickz is coming to Houston in the fall of 2022. Based in Los Angeles, California, the Nashville Hot Chicken has officially signed its first round of franchise deals with Houston planned for at least one location. The brand was founded in 2018 by Shawn Lalehzarian, an Iranian immigrant who started out in the restaurant industry by working in different roles, learning the English language along the way. Some of his experience comes from big names like California Pizza Kitchen, Starbucks, Wolfgang Puck, Pinkberry and Chili's. He worked his way up to a senior management position with an international food and beverage company but eventually realized that owning his own restaurant was his true dream.

Because of his working knowledge of the hospitality industry, he was able to key in on food trends and explored ideas that would fit with the ever-changing tastes of the Los Angeles community. He settled on Nashville Hot Chicken with a West Coast spin. In 2021, Lalehzarian launched the franchise program for The Red Chickz.

The hot chicken sandwiches are available in six spice levels and there are Nashville hot chicken tacos as well. There's also the Chickz and Waffle or Chickz and French Toast with a choice of its wings or tenders. Sides include potato wedges, cheese curds and coleslaw.

Chef Del Grande, shown here (center) with Sam Governale and Benjamin Berg, is retiring.
Photo by Robert Power
Berg Hospitality Group announced this week that Houston's first James Beard Award-winning chef Robert Del Grande will be stepping down from his executive chef role at Turner's and The Annie Cafe & Bar to spend more time with his family and new grandson.

Del Grande won the JBA Best Chef: Southwest in 1992, just one of the numerous accolades he received in his four decades in the restaurant industry.  He was at the forefront of Houston's culinary scene beginning in the 1980s with a culinary style that was American with a strong Southwestern influence and a Texas touch.

Del Grande, who has a Ph.D in biochemistry,  came to Houston in 1981 and took over the executive chef role at Cafe Annie, a restaurant owned by his now wife Mimi's sister and brother- in-law, as reported here in the Houston Press. Years later, in 2009, the restaurant revamped itself as RDG + Bar Annie, transitioning back to Cafe Annie in 2016.

In 2019, through a new partnership between owner Benjamin Berg, owner of Berg Hospitality Group, Del Grande closed Cafe Annie in July and the restaurant again went through a reimagining. It reopened as The Annie Cafe & Bar in September of that year. The pair then opened Turner's in the space underneath The Annie in March 2020 right at the beginning of the pandemic shutdown.

Robert Del Grande in 2018 at Cafe Annie.
Photo by Kate McLean
Del Grande says he has enjoyed working with the team at Berg Hospitality Group and is proud to end his illustrious career having helped to establish the two concepts. In a press release the chef said, "It's been a wild ride since I arrived in Houston in 1981 chasing after my now wife Mimi...At 67 years old, I am excited for this next chapter of my life and to spend more time with my family, especially now that I am a grandfather."

While Del Grande will be stepping away from day-to-day operations at Turner's and The Annie Cafe & Bar, he will continue to mentor his staff and ensure the success of the two restaurants as Chef Emeritus.

In the meantime, Jose Valencia will continue as chef de cuisine while plans for Del Grande's successor are finalized.

Rice Epicurean, 2020 Fountainview, will shut its doors permanently at the end of July, bringing to a close the long history of the family-owned grocery store which first opened in Houston in 1937. In a statement on its website, the owners said that they have entered into an agreement with Spec's Wines, Spirits and Finer Foods to lease the Fountainview space.

The grocery was founded as Rice Blvd. Food Market 85 years ago by Edna and William Levy in a shopping center developed by Edna's father, Manuel Meyerhoff, in what we now call Rice Village. In the 1950s, Joel Levy and Alfred Friedlander joined the family business helping to expand it across the city.

Owners Bruce Levy, Gary Friedlander, Tommy Friedlander, Scott Silverman and Phil Cohen expressed their gratitude to both longstanding and new customers for their patronage and support.

Brush up on your chopstick skills; another Hando opens next year.
Photo by Al Torres Photography
Hando, 8217 Long Point, will open in early 2023, according to the Houston Chronicle. It will be the second location for the sushi bar which specializes in hand rolls (temaki) and also serves small plates like Shishito Peppers, Beef Skewers and Eggplant Agedashi.  There is also a bar menu with a selection of sake, beer and cocktails.

Executive chef Man Nguyen, who opened the Heights location, will be in charge of the menu at the new restaurant, which will seat 30 guests compared to the original's 22 seats. It will join Feges BBQ and Shoot the Moon in the Braun Enterprises shopping center located in Spring Branch.

Triple S Pho & Grill, 414 W. Grand Parkway S., opened in early May. This is the second location for the Vietnamese restaurant which also operates a location on Barker Cypress. A third location for Katy is planned soon.

It offers a variety of banh mi, banh bao, rice and vermicelli bowls and pho, plus starters like spring rolls, egg rolls and wings. Its beverage menu has a selection of fruit teas, milk teas, coffee drinks and smoothies. 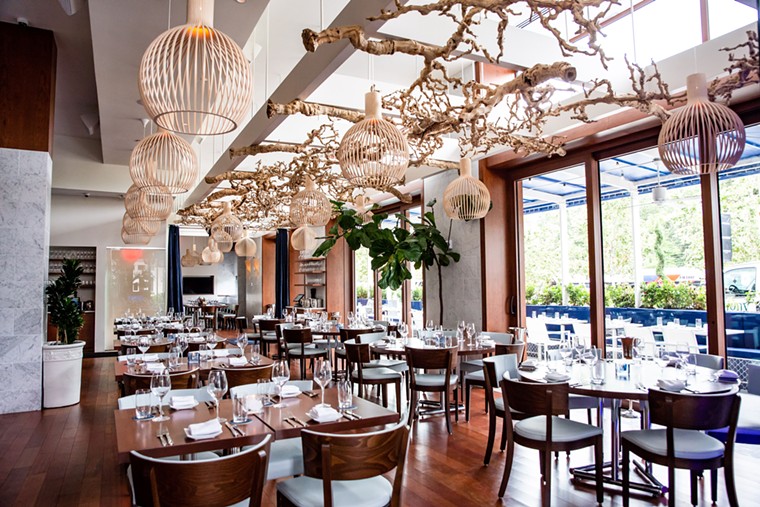 The beautiful dining room at Ouzo Bay is open for lunch.
Photo by Kirsten Gilliam
Ouzo Bay, 4444 Westheimer, has relaunched its lunch service. Diners can start with Mediterranean-inspired Mezedes such as Flaming Saganaki, Wagyu Beef Kafta Kabobs or Grilled Portuguese Octopus.  There are soups like the Chicken and Orzo (avgolemono) and salads such as the Watermelon Salad made with dehydrated olives, cucumbers, tomatoes, arugula, basil and feta. Sandwich options include the Lamb Meatball on a brioche roll and the Crab Cake with jumbo lump crab. Lunch entrees such as Seared Shrimp served  manitaropita-style (in phyllo) and Redfish with herbed gigante beans, fava beans and lemon caper olive oil offer Mediterranean twists on seafood dishes.

Cool down in Sugar land with a fresh fruit paleta.
Photo by Morelia Gourmet Paletas
Morelia Gourmet Paletas, 16155 City Walk opened six months ago in Sugar Land but it is having a grand opening celebration June 4th beginning at 1 p.m. with free paletas until they sell out. Morelia uses 100 percent natural ingredients for its handmade paletas with fresh fruit flavors like mango or passionfruit or creamy treats such as Belgian Chocolate and Sicilian Pistachio.

The first location opened in Miami in 2016. The Sugar Land shop is the first Texas store for the company.

Houston Restaurant Weeks has announced its dates for 2022. From August 1 to September 5, Houstonians can Dine and Do Good by ordering prix fixe meals at participating restaurants around the Greater Houston area.

Each restaurant will offer various menus with two to three courses (varies by restaurant) for lunch ($25), brunch ($25) and dinner ( $39/$55). Donations from the sales will be $2 for lunch and brunch and $4 or $6 for dinner, depending on the menu. The restaurants and menus will go online July 15 at  houstonrestaurantweeks.com. 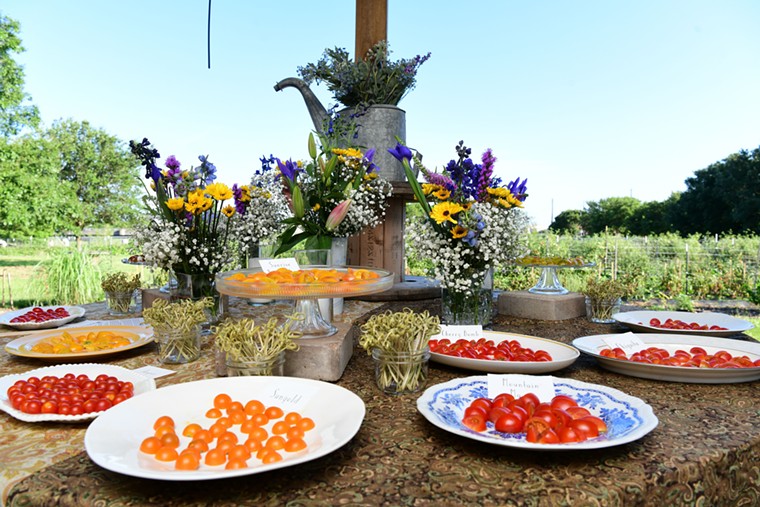 The summer harvest yields an abundance of juicy tomatoes.
Photo by Daniel Ortiz
Hope Farms, 10401 Scott, is now harvesting 40 different varieties of tomatoes and fans of the love apples are able to purchase them at its weekly Saturday Market which runs from 9 a.m. to 1 p.m. or through the farm's Seasonal Farm Share, a subscription service which is delivered weekly to subscribers' homes.

The list of varieties includes tomatoes of different colors, size and taste. Customers can wow dinner guests with a beautiful tomato salad made with fruit such as Striped German-3, Lemon Boy, Bronze Torch, Sun Gold and the beautifully dark Midnight Snack. Or enjoy the simplicity of a tomato sandwich using a Pink Brandywine or Cherokee Purple. It's best to load up before the scorching summer heat ends the harvest.

Hope Farms is a 7-acre urban farm and educational center located in the midst of a Houston "food desert". The proceeds from the market and subscription sales goes to Recipe for Success Foundation, a non-profit which has worked to combat childhood obesity and educate the community about healthier diets for our youth.
KEEP THE HOUSTON PRESS FREE... Since we started the Houston Press, it has been defined as the free, independent voice of Houston, and we'd like to keep it that way. With local media under siege, it's more important than ever for us to rally support behind funding our local journalism. You can help by participating in our "I Support" program, allowing us to keep offering readers access to our incisive coverage of local news, food and culture with no paywalls.
Make a one-time donation today for as little as $1.