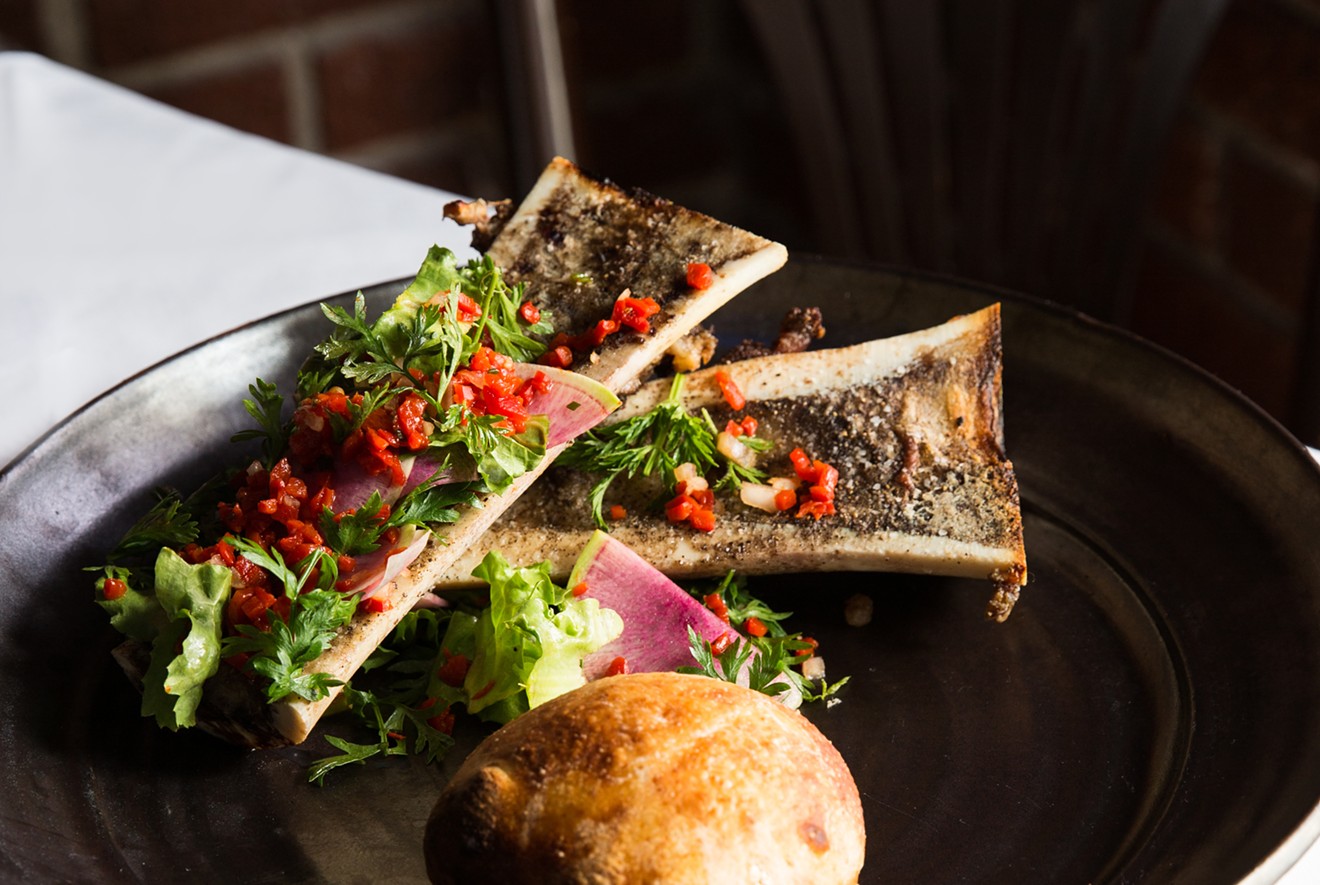 Suck the marrow out of life. Or the bone. Photo by Julie Soefer

One-Fifth Romance Languages, 1658 Westheimer, will close July 31 to make way for its next concept, One-Fifth Mediterranean. For folks wanting to bid adieu, the restaurant will host a family meal the last evening. There will be no set menu, so open your mind and your taste buds and let Chris Shepherd's kitchen staff do their magic. You will also have to open your wallet. Tickets are $100.50 per person and include tax and gratuity.

Lyle Bento Returns to Underbelly Hospitality.
Photo by Julie Soefer
Southern Goods, 632 West 19th, will not reopen. The restaurant known for its whole hog barbecue and much-loved burgers was damaged by fire last November. Chef/owner Lyle Bento attempted to raise funds to reopen, according to Eater Houston, but a mix of leasing issues and insurance company woes has led to a permanent closure of the critically acclaimed restaurant that had been lauded by Texas Monthly, the Houston Chronicle and the Houston Press. In fact, the Press named its burger as the best in Houston in 2017.

However, a talented chef like Bento has many options and Houstonians will be happy to know that he has returned to work with his former boss, Chris Shepherd, as the chef de cuisine for Underbelly Hospitality. He will be running the catering program, which includes the kiosks at NRG Stadium, and also helping with the kitchens and menus at the various UH restaurants. The new catering kitchen is being built out in a Montrose bungalow and will offer an event space and catering facilities, but no bathtub for the Hawaiian hog roasts for which Bento is known. There will be brand new equipment to work with.

Chef/owner Chris Shepherd said in a press release regarding Bento's new position, " As Underbelly Hospitality grows, we want to bring our family back. He's a damn good cook and a great leader."

El Tiempo 1308 Cantina is riding off into the sunset.
Photo courtesy of El Tiempo

El Tiempo 1308 Cantina, 1308 Montrose, is closing July 31 after its final service. There will be a fiesta to close out the evening with a silent auction for " The Last 1308 Cantina Margarita" with the proceeds going to the Ninfa Laurenzo Scholarship Fund. There will be other items such as memorabilia and mementos up for auction as well.

For nearly four years the restaurant, which opened in 2006, has operated on a month-to-month lease with the property owner, but the landlord is now planning a mid-rise apartment project on the spot.

Owner Roland Laurenzo said in a press release, " While we are disappointed and sad to lose 1308 Cantina, our customers are so important to us, we built 1308 El Tiempo Annex in anticipation of this day."

Let the bidding begin.
Photo courtesy of El Tiempo
Besides the El Tiempo Annex at 322 Westheimer, there are still six other El Tiempo locations around the greater Houston area in which to imbibe a frosty margarita and nosh on the pork tamales of which this writer is very fond.

It's not retro, it's Etro.
Photo by Houston Press

Etro Nightclub, 114 Main, will open August 3. The former Etro Lounge is moving into new digs downtown at Main & Co, a mixed-use development that occupies the historic Raphael and Dorrance buildings.

Originally located at 1424 Westheimer, the '80s inspired dance club will still feature music videos from the best decade ever (okay, that's debatable) and retain much of its '80s decor. However, the upgrade will offer a bigger dance floor for moon walkers and break dancers. C'mon, vogue.

The main grand opening party will happen on Saturday, August 4, hosted by The New Beat with DJ Mike Snow.

The original Montrose location will close its doors July 28, so dig out the parachute pants and shoulder pads and say farewell to the old club. And your mullet. It's time. And don't even think about reforming it into a man-bun.

If you're an Erasure fan, check out the last tribute party July 27 at 10 p.m. with VJ Marc Nicholson, aka E-nertia. Go break those chains of love and give a little respect.

There are several other locations around town, including Southwest Houston, Webster and Cypress. The Katy location celebrated its grand opening in April and there's a new store opening in Arlington.

The business is kid-friendly (just don't mention the adult drink flavors) with games and non-alcoholic frozen drinks available. And of course, candy. Try not to get Mom and Dad's frosty beverages mixed up with the kiddos'.

Most locations offer food as well, such as fried chicken tenders and chicken and waffles.

El Segundo Swim Club, 5180 Avenue L, opened with a preview event July 4. The East End hangout offers a swimming pool for looking hot and cooling off. With day passes at $20, this Adult Swim, offers a unique experience with cocktails, local canned beers and wine for sale. The re-purposed shipping container cabanas are available to rent for your posse and season passes can be had for a Benjamin. That's a hundred dollar bill.

Angel's Seafood, 6199 Griggs, opened in May inside the CT Mini Mart. Despite its convenience store setting, the seafood restaurant is hopping with folks trying to get the last of the season's crawfish or seafood like fried shrimp, oysters and and catfish. There are bulgogi tacos and eggrolls for those who shun food that swims.

Try the 420 fries made with Angus beef, Hot Cheetos and topped with a sunny-side egg. You don't have to have the munchies to eat them.

Reservations are a good idea for dinner, but if your schedule and funds are a little tight, there is a lunch menu which gives a good sampling of the restaurant's offerings. There is also a social hour, Monday through Friday, 4 p.m. to 7 p.m. with $3 sake, $4 house wine and $5 cocktails. Try one of the signature cocktails at happy hour like the sake champagne mojito. There are also happy hour food specials.

Cobble and Spoke, 1900 Blalock, opened mid-June, and is well on its way to becoming the local for the locals. With 40 beer taps, you can bring your brew crew and try them all (not in one night). The strip center pub offers Texas Hill Country small batch wines for lovers of the vine. There is no food menu, but Simply Greek next door offers tasty Greek food that can be brought in or delivered.

Aladdin Mediterranean Cuisine, 1737 West 34th, opened July 12. This is the second location of owner Ali Nahhas' Lebanese/Greek restaurant. The original has stood at the corner of Montrose and Westheimer since 2006.

Much of the same food will be served, including different varieties of hummus, lentil dishes, falafel and meatballs. There is lamb shank, shawarma and gyro meat as well. Like the original location, the new restaurant serves fresh, hearth-baked pita.

Diners can start out with the quick bites like samosas or dabali ( similar to a burger with a sweet and spicy potato mix and garlic chutney). Main dishes include biryani, vindaloo, paneer and Afghan chicken or goat curry.

On the Indo-Chinese menu are items like gobi Manchurian (fried cauliflower) and hakka-style noodles.

Carb lovers can revel in the different flat breads available such as tandoori roti, naan and paratha.

For those with a sweet tooth, there is baklava, gulab jamun and other homemade pastries.

Checkers, 12749 Market Street, will open July 24 at the end of September (Update 12:45 p.m. July 20, 2018: We just received word the opening has been pushed back.) The Tampa-based drive-thru restaurant offers fast food burgers, chicken and fish sandwiches, wings, hot dogs and fries. There are also loaded milkshakes, stackers and soft-serve cones.

The new location makes the 14th Checkers and Rally's restaurant in Houston with plenty more planned for the future.

The Spaghetti Warehouse, 901 Commerce, has been sold and the new owners' proposals for development may include turning it into an open air street market with a bar on the second floor, according to The Houston Chronicle. The historic building was severely damaged by flooding from Hurricane Harvey and there was speculation that it would still reopen as part of The Spaghetti Warehouse brand. That no longer seems to be the case, but we hope that whatever its future purpose, the building will be preserved as part of Houston's history.
KEEP THE HOUSTON PRESS FREE... Since we started the Houston Press, it has been defined as the free, independent voice of Houston, and we'd like to keep it that way. With local media under siege, it's more important than ever for us to rally support behind funding our local journalism. You can help by participating in our "I Support" program, allowing us to keep offering readers access to our incisive coverage of local news, food and culture with no paywalls.
Make a one-time donation today for as little as $1.