La Vista 101 is fresh, modern and new.
Photo courtesy of La Vista 101
Clarification, June 11, 2018: Ben McPherson formerly of Krispy Bird & Batter, is no longer affiliated with it and hasn't been since September 2017.

La Vista 101, 1805 West 18th, officially opened May 29. The reinvented restaurant from Greg Gordon has been quietly back on the scene with a soft opening the past week. Gordon opened the original La Vista nearly two decades ago, serving Italian favorites to the Briargrove area residents who appreciated the neighborhood vibe and the BYOB. It closed in May 2017 to make way for its reincarnation as La Vista 101.

The new restaurant will offer a more contemporary decor than the original and a modern menu with a mix of shareable Italian dishes and Mediterranean influences. Gordon has brought in several industry professionals, making this new venture more of a team effort than the restaurant he has captained since he was in his thirties.

Interior designer, Carl Eaves, who is behind the design of such restaurants as Alice Blue and Liberty Kitchen, has transformed the stand alone building, which was previously a Pizza Hut, into 3,000 square feet of natural wood booths sporting argyle fabric and lightly upholstered wood chairs sitting on top of a black and white patterned carpet. There are lots of geometric patterns going on here, softened by a little pink, green, gray and turquoise to give a cozy feel. There is also a bar area and covered patio.

J.D.Woodward will serve as executive chef. Woodward has had an extensive culinary career over the years working at the Rainbow Lodge, Underbelly, and more recently, working with Lyle Bento at Southern Goods as chef de cuisine. He also managed its wine program.

Keep it cool with carpaccio.
Photo courtesy of La Vista 101
The menu will include Italian dishes like wild boar fettucine bolognese and wood-fired pizza, but also items like beer can yard bird, which is a roasted half chicken with spicy tomato sauce, toasted almonds and couscous.

On the "Harvest" side, look for heirloom carrots, whole roasted corn and caponata.

Jeb Stuart, who has experience as an executive chef, wine consultant and general manager will be the GM and wine program director at La Vista 101. While there will no longer be BYOB, a look at the current wine list, meant to be paired with the Mediterannean-inspired menu, shows a definite tilt toward French and Italian wines, with a few Spanish and New World varieties as well. Stuart, by the way, was declared " Service Person of the Year" at the 2016 Houston Culinary Awards. He's a Jeb of all trades.

Bar manager, Morgan Mansur will head the cocktail program, which features drinks like the Champagne Cobbler, a mix of champagne, orange and berries; perfect for a hot, Houston evening. There will also be a small selection of craft beers, including a Petrus Aged Red Ale-a red ale matured in oak foeders with sour cherries, meant "for the table" at $15.

Who's hungry?
Photo courtesy of Kojak's

Kojak's Fine Foods, 1912 West 18th, is bringing back dinner service, according to The Leader. Owner Mark Oster's small eatery will have a whole new look, just in time for the burgeoning Lazybrook/Timbergrove dining scene. In fact, Braun Enterprises has given an upgrade to the strip center itself. There will be more tables and a handmade wooden bar and counter unit with seating. The shop has been around since 2000, serving po-boy sandwiches, salads and pasta dishes.

Oster is looking to give the renewed restaurant a more upscale vibe while keeping the prices family-friendly.
He plans to offer craft beer and wine when the license comes through in July. There is also locally made gelato and cappuccino available.

The restaurant has no connection to the bald-headed T.V. detective with a fondness for lollipops.

No hula or leis in your vacay budget? Try the Waikiki Sunset to chase away your broke summer blues.
Photo courtesy of Teapresso Bar

Teapresso Bar, 718 West 18th, debuted at the Lowell Street Market with its soft opening, May 18. The Hawaiian-based tea bar offers bubble tea, milk tea, organic coffee and lemonades. It makes the drinks to order with the Teapresso machine and uses no powder mixes. Instead, it uses syrups and fresh fruit bases, according to EaterHouston.

The choices are almost overwhelming. There are plenty of premium teas like roasted oolong and toffee assam to choose from. There are also slushes, smoothies and frappes to conquer the Houston summer.

Teabysea, 2015 Yale, which opened May 23, is on the smaller side with a simple menu. There are classic milk teas ($3.50) like rose milk tea, which is infused with real rose petals and green Thai tea, which is a Yelp favorite. The superfood drinks ($4.50) have choices like golden tumeric, green matcha, blue algae and beetroot. Mixing them together for a rainbow is the way to go. Unicorns sold separately.

Nitro coffee is available, along with boba and smoothies. There are no artificial colors, flavors or powders in the beverages at Teabysea.

McPherson, who is no longer affiliated with Krisp & Batter (since September 2017), is working on his newest project, BOH Pasta at Bravery Chef Hall, which is slated to open late summer 2018.

For those craving the waffle buns and queso fries, the N. Shepherd location is still open for chicken licking.


Flying Pho, 3434 Ella, began its soft opening on May 23, closed for a couple of adjustment days and officially opened May 29. Christopher Huang, owner of Ninja Ramen, is serving Northern Hanoi-style pho which varies somewhat from the more common pho, which might freak a few phonatics out. The Northern Hanoi-style pho is served with wide flat noodles and does not include some of the typical accoutrements that phophiles have come to expect. Hanoi-style differs from the Southern Saigon pho in that there is no basil or sprouts offered, or hoisin for dipping the meat. Instead, chili sauce is available to kick up the heat. Phofers might find the broth in Hanoi style less sweet than what they are accustomed to.

Don't expect the usual offerings of different meats, either. No meatballs, no tripe, no beef tendon. Flying Pho uses filet mignon as its meat and the broth is all beef bones as well. Don't be a pho-ney. Try something new.

JINYA Ramen Bar, 5050 FM 1960 W, opened May 15. There are three other locations in Katy, Webster and Midtown, with several more planned in the surrounding Houston area.

The Japanese Ramen bar was founded by Tomori Takahashi, who opened his first ramen restaurant in Tokyo in 2000. He came to the United States in 2010 and saw a need for authentic Japanese ramen in the U.S. The first JINYA opened in California and there are now nearly thirty across the country and another five restaurants in Canada.

JINYA is known for its three-day-aged noodles and its use of FUJI water for its long-simmered broths. The ramen menu is more extensive than many other noodle restaurants and also features small plates like crispy chicken and pork gyoza, plus JINYA mini tacos and poke bowls. There is also mochi ice cream.

Cantina Barba, 3701 N.Main, opened last week. The offshoot of the Taqueria Barba food truck, has found a home without wheels, but not necessarily brick and mortar.

The tacos are less than three bucks unless you add on cheese or avocado for fifty cents, but most folks like the typical meat, onion and cilantro flavor profile. Choose from smoked pork, carne asada or chicken. For breakfast taco buffs, the choices are bacon, potato or chorizo.

Cantina Barba has added a few new items to the menu as well as mezcals for the wicked. The food truck, Taqueria Barba, will still be serving at 2119 Washington.

Izakaya is rolling out a new look.
Photo courtesy of Izakaya

Izakaya, 318 Gray, is unveiling its new look and new menu June 1. The Japanese pub in Midtown serves small plates similar to tapas, meant to create a convivial atmosphere of sharing food while enjoying an adult beverage and conversation.

The new menu will have an expanded focus on ramen and an all-new dumpling bar which will feature a number of traditional dumplings made by experts in Chinatown, plus weekly dumpling specials of two signature dumplings by Chef Jean-Phillippe Gaston who has spent the past few months working in Chinatown and learning the craft from skilled dumpling makers. 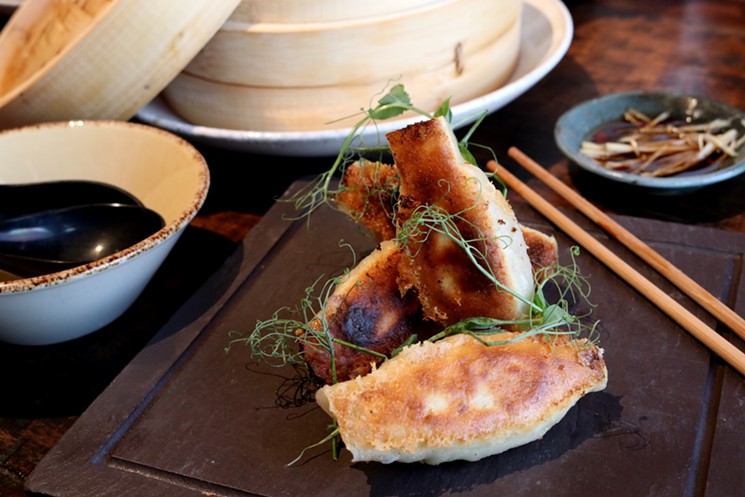 Pan fried dumplings are meant to be shared...or not.
Photo courtesy of Izakaya
Expect some unique fillings from Chef Gaston such as antelope and quail rillettes. There will also be a signature vegetarian dumpling.

Alex Coon, bar manager, also has planned new seasonal cocktails and expanded the menu of shochu and saki, along with whiskies from Japan and Thailand. Reservations are recommended.

Artista, at the Hobby Center, has closed to make way for a new restaurant concept which will open in September before the theatre season begins. The Grand Lobby Bistro in Sarofim Hall will be open 1 1/2 hours prior to performances for hungry patrons.

Chick-Fil-A, 18323 Gulf Freeway, had a small roof fire on May 25 according to its Facebook page and was back cooking and serving in the drive thru the same day.  The dining room reopened the next morning.

Popeye's Louisiana Kitchen, 7100 Lawndale, was not so lucky. A fire broke out around 4:15 p.m., May 25, while electrical workers were in the attic, as reported by the Houston Chronicle. Fortunately, there were no injuries, but the fast-food chicken restaurant suffered heavy damage and will remained closed until further notice.

Koala Kolache was the first shop in Houston to sell mochi donuts, which are made with Japanese sticky rice flour, creating a stretchier,chewier donut with a crunch still on the outside. It contains significantly less gluten than traditional yeast or cake donuts. It also comes in at a sweet (!) 95 calories compared to 195 calories of a traditional circular goodie.

Koala Kolache offers a variety of flavors such as matcha green tea, dark chocolate ganache, and limoncello.
The donut shop expects to offer a completely gluten-free donut later this summer.

Closings reported for May 2018:

Charivari, 2521 Bagby, closed May 26
Fielding's Rooster, 4223 Research Forest, closed mid-May
Jenni's Noodle House, 3773 Richmond, closed May 18
Santa Fe Flats, 21542 Sate Highway 249, closed early May
KEEP THE HOUSTON PRESS FREE... Since we started the Houston Press, it has been defined as the free, independent voice of Houston, and we'd like to keep it that way. With local media under siege, it's more important than ever for us to rally support behind funding our local journalism. You can help by participating in our "I Support" program, allowing us to keep offering readers access to our incisive coverage of local news, food and culture with no paywalls.
Make a one-time donation today for as little as $1.