Openings and Closings: The Lounge at Field and Tides, The Classic All Day 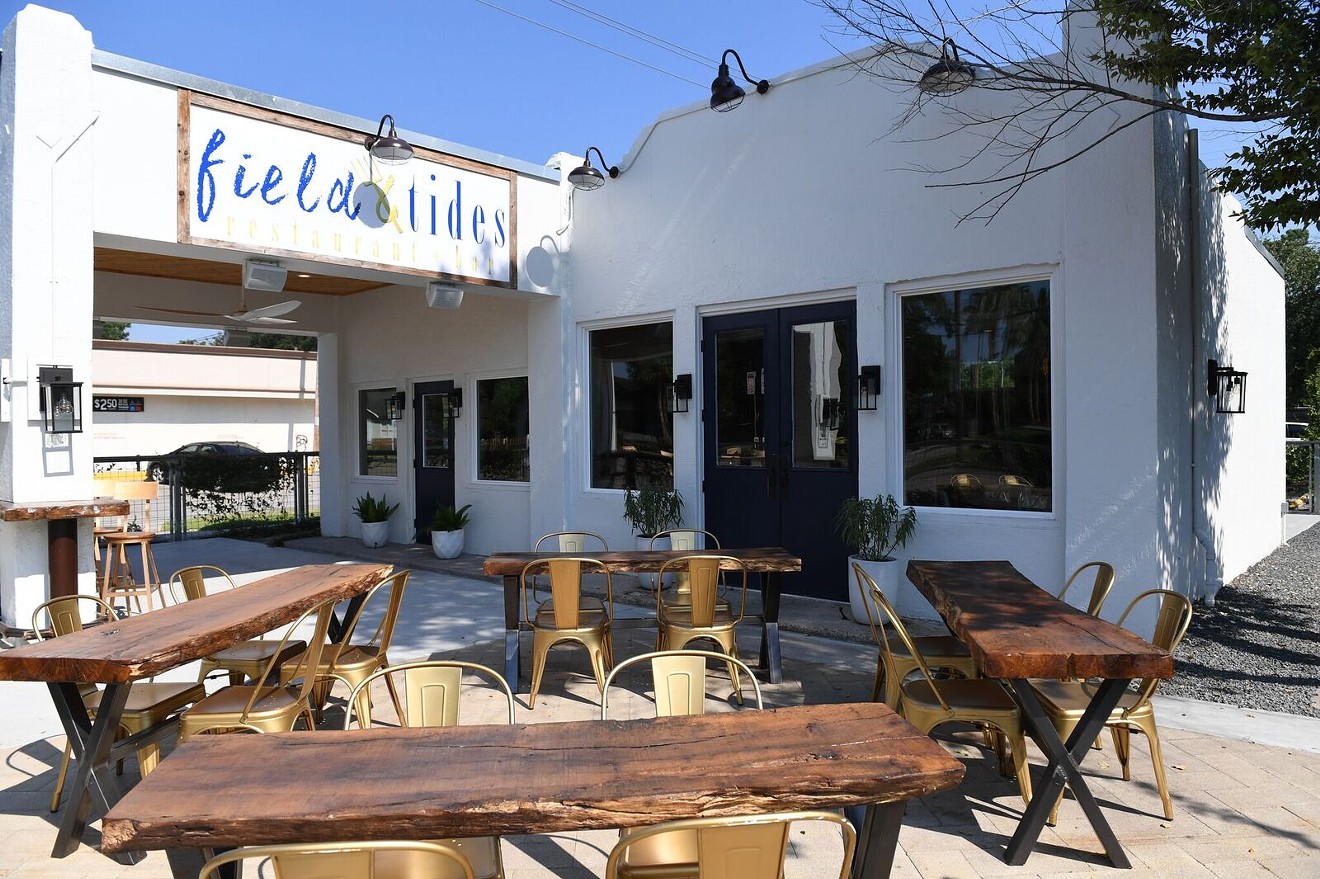 Field and Tides, 705 East 11th, has expanded its footprint by adding the 1940s vacant gas station next door as a lounge extension. Chef Travis Lenig and business partner Chico Ramirez opened the newly renovated building, which lay dormant for more than a decade, to serve as a lounge and patio bar where patrons can have a drink while waiting on a table at the restaurant or enjoy cocktails and snacks while relaxing on the patio or in the lounge.

The Lounge at Field and Tides was designed by Wyndy Ramirez of Wynne Design along with contributing designer, Gino Vian of Merchant to Market. They used the original brick walls and concrete floors, while incorporating 100-year-old oak pieces from Round Top, Texas. 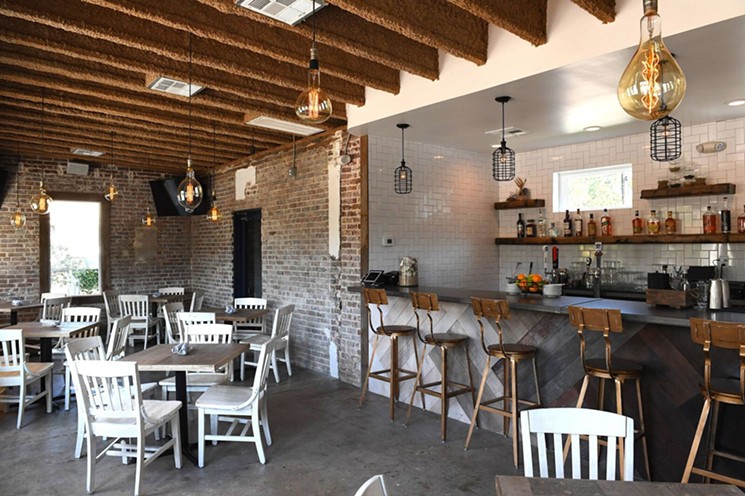 Photo by Jack Opatmy
The Lounge at Field & Tides will also be available for private events, seating 26 to 28 guests, or accommodating 50 guests for a standing event. Combined with the patio area, it can host up to 80 people, standing.

The Classic - All Day, 5922 Washington, began its dinner service August 3. All day service, including breakfast and lunch, began August 6. The new concept from Benjy Levit combines the melting pot of modern American cuisine with retro elements such as counter seating and daily special plates.

The Classic takes the place of Levit's previous restaurant, benjy's on Washington, which closed December 31, 2017, to make way for the new restaurant. With sleek booths and a blue/green/black decor, the contemporary design comes from Houston designer Aaron Rambo, with Austin-based architect Michael Hau opening up the space to bring in more light, as reported by the Houston Chronicle. Chefs Mike Potowski and Maria Gonzalez are in charge of the menu and have been with benjy's since it opened on Washington in 2009.

On the menu are classic favorites like matzo ball soup, rotisserie chicken and burgers, but also not-so-classic dishes like bucatini Napolitan and taramasalata.

While most traditional American diners don't offer cocktails, at The Classic, you can enjoy a Sidecar or a glass of wine along with your pork and eggs. Are your lips tingling yet?
Photo courtesy of Big City Wings
Big City Wings, 21322 Kuykendahl, is slated to open mid-September. This will be the sixth location of the Houston-based wings restaurant. While some other wings competitors are closing a few locations, Big City Wings is expanding across the Houston area, with a seventh location planned for Kingwood at the end of 2018.

The family-friendly restaurant serves buffalo-style chicken wings with a variety of sauces and dry blends. There will be an arcade for kids, a spacious outdoor patio and over forty televisions for viewing our hometown sports teams kicking booty. 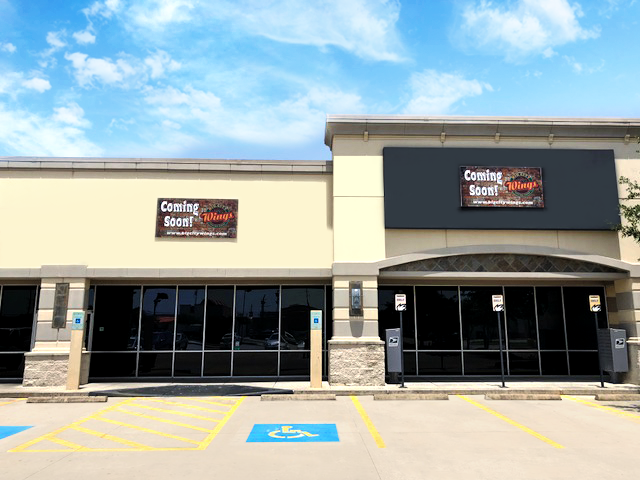 Besides wings, there are burgers, sandwiches, salads and its version of chicken wings and waffles.There are also spuds (baked potatoes), with a choice of  "Did I really eat that?" toppings, including, we s#!+ you not, Frito Pie. Plus, there's plenty of ice cold beer to cool your throat if you opt for the firehouse sauce.

Papa Murphy's, 1214 West 43rd, closed August 1, according to The Leader. The lease was due to run out next month, but a blown transformer precipitated an earlier than expected closing.

Nobibi,a specialty ice cream store, is coming to Houston in the first quarter of 2019. We don't know much about the origins of the new ice cream company, though a Beijing tourist site has a blurb about it. We do know that a  Houston location is coming at Blalock Market and I-10, according to a press release from Weingarten Realty.

The ice cream is hand-stirred and the focus is on organic and raw ingredients. If you want your ice cream cone wrapped in a cloud of cotton candy, they've got it. If you want to live like Liberace for a day, you can top your treat with edible 24k gold.

We used to be content to sit on the porch with some Blue Bell Homemade Vanilla. 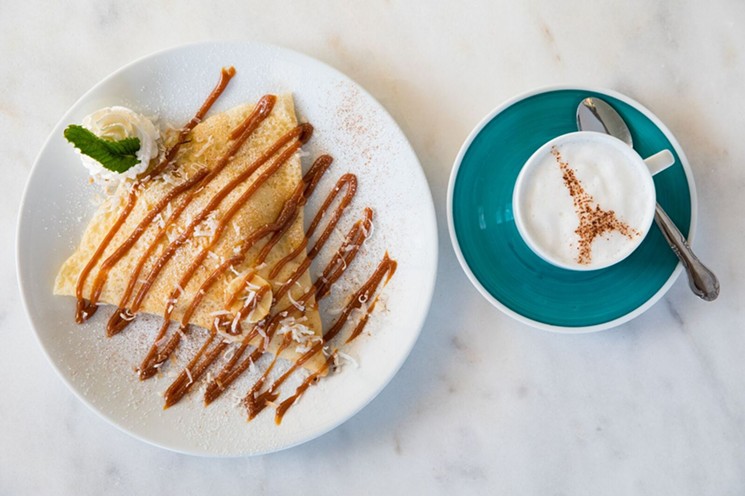 Sweet Paris Creperie and Cafe, 2701 Drexel, in Highland Village will open in the fall of 2018. There are plans to open additional creperies in The Woodlands at 9595 Six Pines and one in Baybrook. Three San Antonio locations are planned over the next five years.

The crepe empire from Allison and Ivan Chavez began with the first location in Rice Village in 2012 and now has expanded to five, including the most recent in College Station this past July. Besides sweet or savory crepe choices, there are paninis, waffles, soups, salads and milkshakes. If you prefer to enjoy your Ham and Gruyere crepe with a sparkling wine, adult beverages are available as well. 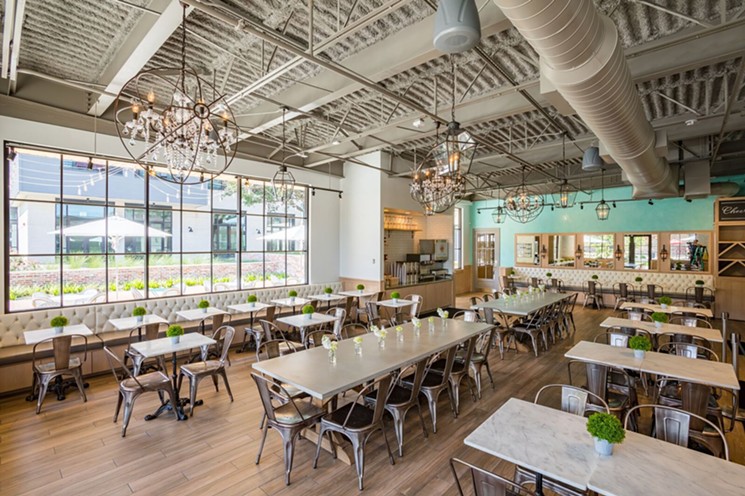 Chandeliers in metal cages equals French-industrial chic.
Photo by Shannon O' Hara Photography
The cafe has a " Eat Here, Feed There" program in which patrons can choose from three designated crepes on the menu, from which a portion of the proceeds will go to a local food bank. C'est tres sympathique!

A good cup of coffee needs a fresh version of bagel and lox.
Photo courtesy of Cavo Coffee

Cavo Coffee, 2617 Bissonnet, opened softly  last week, according to CultureMap Houston. This is the second location from co-owners Michael and Diane Caplan. Michael Caplan, a former nightclub owner of Houston spots like Grasshopper and Uropa, was a founding partner in Siphon Coffee in 2014 before moving on to open the first Cavo Coffee at 3773 Richmond in Greenway Plaza.

There is also a selection of sandwiches, including a breakfast sandwich of pastured eggs, peppered bacon, Grafton cheddar, arugula and chive butter on challah. For groups there are shareable snacks like the warm brie plate or white bean and fennel dip.

Besides the two coffee cafes, Cavo's has a mobile coffee bar available for private events such as corporate parties and weddings. Coffee might be a better option if your family has too many drunk uncles.

Chau uses a Vietnamese recipe for pandan waffles from her grandmother. The pandan leaf is a commonly used flavoring in Southeast Asia and it is often used to infuse coconut milk, which is then incorporated into a waffle batter.

Besides the pandan-infused soft serve, there will be flavors like ube and black sesame. Ube is a purple yam and gives a lurid violet color to the ice cream. Add the green tinge of the pandan waffles and you might feel like you're back at your high school prom in 1986. Or maybe that's just me. The Egg and I at Louetta and 249 is now First Watch.
Photo by Lorretta Ruggiero
First Watch, 13325 Westheimer, opened August 6. The Market Square at Eldridge store makes the eighth location in the Houston-based franchise from Mack Haik Enterprises. Haik was part of the Houston Oilers franchise many moons ago as a wide receiver and owns several car dealerships, along with a number of other investments.

First Watch serves breakfast, brunch and lunch from 7 a.m. to 2:30 p.m. While diners can certainly enjoy the usual bacon and eggs, there are also fresh, healthier options including avocado toast and the A.M. Super Bowls.

One Armed Scissor, will reopen at 208 Travis, in the fall, according to CultureMap. The laid back cocktail bar from Michael Molina, opened August 2017 adjacent to Hughie's Tavern at 4721 N. Main The cozy, intimate and dark space was known for its friendly bartenders and reasonably priced mixed drinks.

Now, the friendly bartenders and reasonably priced drinks will be Downtown.

No details yet.
Photo by Allisen Picos
Ula's Washington, 5555 Washington, has a notice on the door, spotted by a sharp-eyed Houston Press advertising executive. No details as of yet. We will keep Press readers posted.
KEEP THE HOUSTON PRESS FREE... Since we started the Houston Press, it has been defined as the free, independent voice of Houston, and we'd like to keep it that way. With local media under siege, it's more important than ever for us to rally support behind funding our local journalism. You can help by participating in our "I Support" program, allowing us to keep offering readers access to our incisive coverage of local news, food and culture with no paywalls.
Make a one-time donation today for as little as $1.