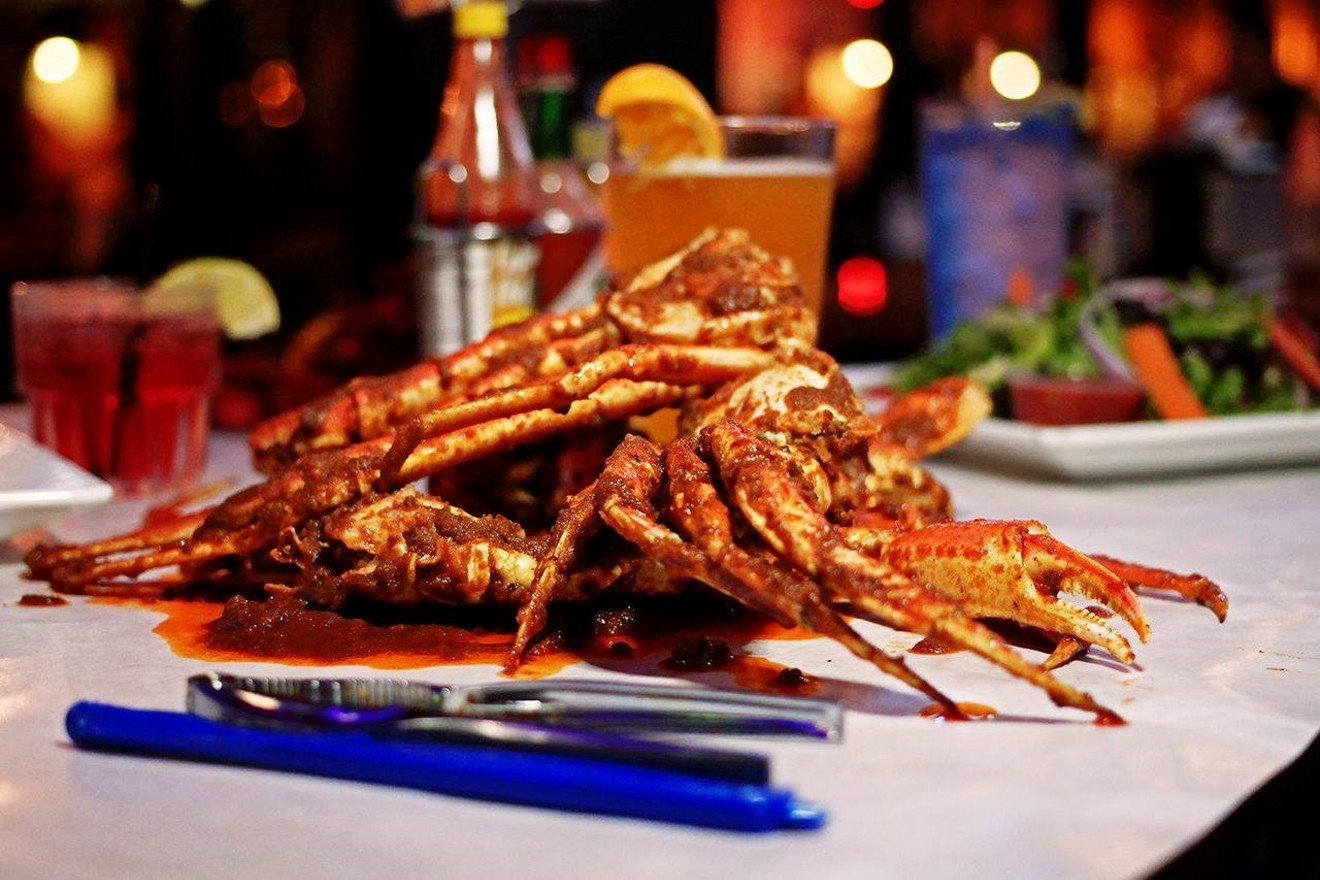 Some like it hot. Some like it hoooot. Photo courtesy of Shell Shack
Shell Shack, the  seafood boil restaurant with six locations in the Dallas-Fort Worth area, is bringing its concept to the Bayou City. The first Houston area location is planned for July at 2412 Washington, in the former Social Junkie space. The new build-out will feature two patios, two bars and a private dining area.

CEO Dallas Hale (yes, he is a Dallas restaurateur whose name is Dallas) and Houston Director of Operations and Partner, Larry Garrett, are planning for eight Houston area stores in the next four years, including one in Katy in 2019.

Artist's rendering courtesy of Shell Shack
Diners can choose boiled seafood such as crab, shrimp and crawfish with their personal spice preferences. Have it served on a tray or dumped on your table. For more delicate flowers, there is the option of having it served "Uptown Style", in which the seafood is de-shelled for you. That might work for Dallas and Houston socialites, but we heartier types know that licking the spice off your fingers is the lagniappe of a good seafood boil.

There are burgers and Buffalo chicken for the non-seafood eaters. There are also crab tater tots for people who think crab and tater tots are two of the greatest foods ever. People like me. People like me also might order the Mi Shellada, a cocktail of Dos XX, Shell Shack's special Bloody Mary mix and lime.

Calle Onze, 222 W. 11th,  had its "flash" opening June 7. The newest concept from the team at Edison & Patton, serves North Mexican and Texas favorites with a twist. Expect unique dishes like U10 scallops in white mole and Wagyu Salpicon, a plate of Wagyu tartare, chiles vinagre, olive and onion, served with baguette. There are also more typical dishes such as elote, ceviche, and the Edison tamales.

The frozen margaritas start at $9, with the flavored ones like tamarind or papaya guava, coming in at $11-$12. There is a gorgeous patio on which to enjoy a cool libation.

The Pho life.
Photo courtesy of Bibo Bistro and Bar

For non-alcoholic beverages, there is Boba, green and milk teas, plus Vietnamese iced coffee. The restaurant is on track to get its liquor license next week and will serve craft beer, wine and cocktails. Start the party off with the Ultimate Platter ($10), which consists of 2 egg rolls, 2 crunch'in crab rolls, 2 humpty-dumplings and 2 spring'in rolls. Or the pulled pork fries, if you need a little spice in your life. Who doesn't?


Bungalow Heights, 1919 Beall,  had its soft opening the last week of May. Along with a selection of cider, beer and wine, there is a food menu featuring bar favorites like wings, fried green tomatoes and sticky ribs. The wings start out at $7 for five and the big ass pretzel weighs in at $9.

The gastropub's prices might be a bit gastronomical, but the welcoming bungalow's decor with its mix of rustic communal tables, comfortably stuffed chairs and attractive covered patio might lull one into being oblivious to such trivialities.

Slowpokes, the Garden Oaks family-friendly coffee, beer and wine cafe, is expanding with a second location in the fall of 2018 to Kirby Grove at 2925 Richmond. Slowpokes made the Houston Press Best of Houston 2017 list for its coffee and convivial space. It will join Kiran's and PlainsCapital Bank on the ground floor of the office building and will have a patio fronting Levy Park, one of Houston's most popular parks for families with children and fur babies.

The second location will have a larger kitchen and will eventually offer a wider food selection with a number of items from local vendors including Houston Dairymaids, Kraftsmen Baking and Cafe Dolce. Besides breakfast items, empanadas, flatbreads, etc., there will be grab and go items perfect for having a picnic at Levy Park. However, if you want to hang out and sip a cold, local beer or have a great cup of coffee, the new Slowpokes will offer board games for lingerers, just as it does at the original location.

La Grande Roue, 1344 Yale, is expected to open early October or late November, according to Eater Houston.
The wine bar and retail shop will be housed in an old Heights building and will include a bar, inside tables and an outdoor patio.

With 300 to 400 bottles on offer plus munchies like cheese, charcuterie and caviar, it promises to be an oenophile's oasis in the Heights.

Blkdog Coffee, 9630 Clarewood, opened June 21. The coffee shop is the newest concept in restaurateur Mike Tran's Chinatown empire. It will serve specialty coffees from La Columbe Coffee Roasters, which was founded in 1994 by Todd Carmichael, host of the Travel Channel's "Dangerous Grounds" and JP Iberti.

Tran told Daily Coffee News that he plans to serve Brooklyn style pizza with Japanese influenced toppings like spicy miso pork. A former Houston Press writer, who shall remain anonymous, has already sampled the pizza and gives it two thumbs up. There will also be pastries and sweet snacks.

Houston's hot. Daiquiris are cold.
Photo courtesy Of Beaux Coo
Beaux Coo, 5600 Richmond, had its grand opening May 5. If Cajun food and frozen daiquiris are on your "What makes me happy?" list, then this new hot spot, which also has drive-thru service and even hookah, might be your happy place. There are fried seafood platters, po-boys and burgers, including Matt's Beaux Coo burger, a half pound of Angus beef sporting a slice of fried pepper Jack cheese on top. Sides include Louisiana faves like dirty rice and fried okra. Of course, there's gumbo, but there's also red beans soup, to which you can add andouille sausage for $2. And you know you should.

Daiquiris with names like Houston Strong, Clutch City and Panty Dropper are available for drinking in or taking out. Check its Facebook page for the daily specials and crawfish offers.

The Crab Station, 4505 FM 1960, another DFW-based seafood restaurant specializing in crab boils and other fruits of the sea such as oysters, clams and mussels, is headed for Houston in August, as reported by Eater Houston.

Bisou, 4444 Westheimer, is slated to open in the fall, according to CultureMap Houston. The French-inspired restaurant and bar from the group behind Cle` and Spire will take over the spot formerly housing Taverna, which shuttered last week.

Also on board will be Lyon-born chef Frederic Perrier, known for restaurants Grille 5115, Cafe Perrier and AURA Brasserie in Sugar Land, which closed in 2017.

Look for the menu to include dishes like whole roast chicken and arancini-wrapped escargots.

Moxie's Grill and Bar, 5000 Westheimer, is rolling out a new " Gluten Conscious Lifestyle" menu. It isn't a one-hundred-percent gluten-free menu, so for those with severe gluten and other allergies, Moxie's recommends speaking to a manager for assistance when ordering.

Blackened mahi-mahi and chicken vindaloo with jasmine rice are just a sample of the plates on offer. If burgers are your thing, there are several different ones available like the portobello veggie burger or take it to the limit with the loaded burger, which is, well, loaded with aged cheddar, American cheddar, sauteed mushrooms, bacon and barbecue sauce which can be served on a gluten-free bun or lettuce. It is gluten-free, not calorie free, so you might want to opt for the lettuce. It is bikini season.

Take your friend Stringbean Christine for some poutine.
Photo courtesy of Moxie's

Or, if you have given up on ever wearing a bikini again, there's always the poutine at Moxie's.
KEEP THE HOUSTON PRESS FREE... Since we started the Houston Press, it has been defined as the free, independent voice of Houston, and we'd like to keep it that way. With local media under siege, it's more important than ever for us to rally support behind funding our local journalism. You can help by participating in our "I Support" program, allowing us to keep offering readers access to our incisive coverage of local news, food and culture with no paywalls.
Make a one-time donation today for as little as $1.