Keep it classic with the filet mignon and fingerling potatoes. Photo courtesy of Trevor Gerland

Diana American Grill, 800 Bagby, will open during show weeks at The Hobby Center for the Performing Arts. The debut of the restaurant, named for Texas philanthropist and academic Diana Hobby, features an elegant menu from James Beard award-winning chef, Robert Del Grande, best known for his Houston restaurant Cafe Annie.

The pre-show dining leans toward the classics with dishes like red snapper with Gulf crab cioppino sauce. There are steakhouse favorites such as filet mignon with the Diana Grill steak sauce or a veal chop with ragu of mushrooms and tomatoes. 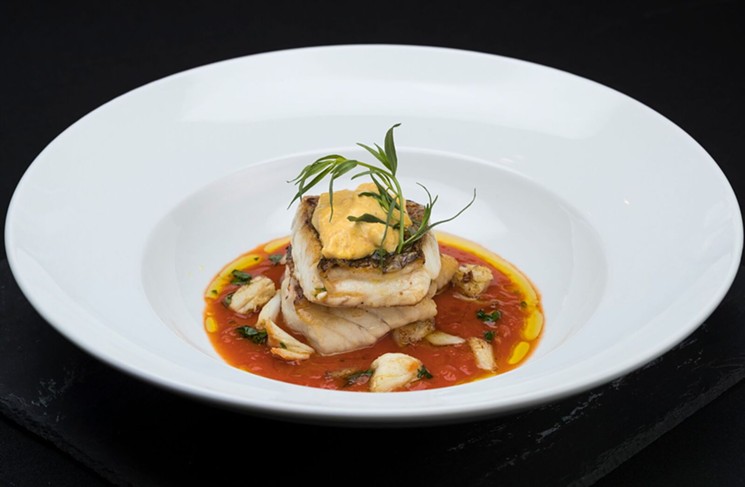 The new restaurant was commissioned by the Hobby Center Foundation and is operated by Spectrum Concessions and Catering. The refurbished interior by Houston architect Tim Cisneros makes use of the dramatic views of the city's skyline and includes the very large outdoor terrace. When not open for show performances, the restaurant, the outdoor terrace, and the vaulted lobby of the Hobby Center are available for large events, galas, and weddings.

Later this fall, Diana American Grill will be open for lunch, Tuesday through Friday, from 11 a.m. to 2 p.m.

Bye-bye crispy chicken wings.
Photo by Troy Fields
Maba Pan-Asian Diner, 510 Gray, closed September 16, as reported by CultureMap Houston. The affordable Asian restaurant debuted in December 2016. Allison Cook declared it the 11th best restaurant in Houston in her Top 100 Restaurants for the Houston Chronicle in 2017. Ma and Ba are Vietnamese for Mom and and was chosen to honor chef Wayne Nguyen's parents, as reported by Cuc Lam in her April 2017 review here in the Press.

Nguyen cites wanting to spend more time with his family and lack of sales as reasons for shuttering the business, according to the Houston Chronicle. However, many customers believe that the lack of parking also contributed to the restaurant's closing since a number of previous restaurants have opened and closed in the same space. Things that make you go yuuummm.
Photo courtesy of The Toasted Yolk
The Toasted Yolk, 2711 Fountainview, will open September 24. This will make the eighth location for the Texas-based breakfast and lunch restaurant from Chris Milton and Mathew DeMott, which first opened in 2010. The other seven locations range from Sugar Land to Conroe and New Caney.

Shiny, happy morning people can start off with one of the four-egg omelets or buttermilk pancakes. For eggs Benedict lovers, The Toasted Yolk offers its version, The Arnold, which comes in a variety of flavors, including the Southern Fried Arnold or the Alaskan Arnold. If you are more of a lunch person, there are sandwiches and entree salads. The entire menu is available from 7 a.m. to 3 p.m.

Warm pho for the cold front.
Photo courtesy of The Pho Shack
The Pho Shack, 23523 Katy Freeway, began its soft opening August 17. This is the second location of Danh Le's Vietnamese restaurant. His first restaurant opened in Sugar Land in December 2016, receiving very good reviews, including a stellar shout out by Mai Pham, here in the Houston Press. Le's 14-hour broth and use of quality meats keep his loyal clientele coming back for more.

Besides the beef noodle soup, there is also vegetarian and chicken pho, as well as banh mi. Diners can start off the meal with homemade egg rolls and finish with a slow-drip Vietnamese chicory coffee. Perfect for that predicted cold front next week, fingers crossed.

Chef Bobby Matos is keeping busy.
Photo by Duc Hoang
Superica, 1801 N. Shepherd, opened September 17, along with its adjacent sister restaurant, La Lucha. We have been covering Ford Fry's anticipated Houston concepts for the past year in the Press and now, they are finally open to the hungry diners of Houston.

Superica is Fry's Tex-Mex concept, which the former Houstonian first opened in Atlanta. Diners can expect tacos, tamales, and enchiladas as well as ceviche and pozole .

La Lucha is a tribute to Fry's memories of the old San Jacinto Inn and the menu highlights Houston favorites like fried chicken and Gulf seafood. Expect oysters from the hearth and a convivial atmosphere.

Customers can choose ice cream by the scoop and waffle cones or different toppings, like espresso honeycomb and Rice Krispy croutons. The Classic Banana Split is comprised of a banana, two scoops of ice cream, two sauces, whipped cream, Amarena cherry, and pecans. It's called a split for a reason, so you might want to indulge with an intimate friend.

Once the store receives its liquor license, there will be wines and beers to accompany your favorite ice cream or you can opt for combining the two with Sweet Bribery's Stout Float or Sparkling Pitaya.

Wakey-wakey. Egghaus has dawned.
Photo by Fajar Hassan
Egghaus Gourmet, 2042 E. TC Jester, opens September 21. That's today, so if you didn't attend the VIP sneak preview, you can still try and one-up your friends by heading out there for a kolache or an elevated taco before they get their lazy buns out of bed. Speaking of buns, Egghaus also offers a variety of breakfast sandwiches.

Magic Island, 2215 Southwest Freeway, is slated to open November 15, according to a Facebook post by entertainment director, Scott Wells. The dinner theatre, restaurant, and performance space started out as a private club in 1983, before opening to the public a couple of years later. The building topped with a large pharaoh's head is a part of many Houstonians' childhood memories. How many of us as twelve-year-olds dreamed of entering the magic building? For those of us who missed out, we may soon have another chance.

The restaurant and performance space hosted many a corporate event and lavish private parties but met its demise due to a fire during Hurricane Ike in 2008. It sat abandoned, except for looters, vandals, and thrill-seekers, for the past decade. Now, the space will open up with some of the same Egyptian kitsch, but with a more elegant and sophisticated decor. The pharaoh's head will be restored to its former glory.

For dinner, there are dishes like Fried Red Snapper, Vietnamese-style ($28) and prime filet with sweet potato puree and roasted root vegetables ($40). The new dinner service runs from 5 p.m. to 10 p.m.

Artist's rendering courtesy of The Rustic
The Rustic, 1836 Polk, has set its grand opening for November 1 with a VIP event and will open to the public November 2. This will be the third location for the Lone Star State-themed concept, which is part restaurant, bar, and music venue. The Rustic first opened in Dallas in 2013 and was a collaboration from Kyle Noonan. Josh Sepkowtiz, and country music star Pat Green. There is also a location in San Antonio.

Noonan and Sepkowitz are founders of FreeRange Concepts, which operates two other businesses in Houston: The General Public and Bowl and Barrel at CityCentre.

The 25,000 square-foot will feature a large outdoor patio, a retractable roof, two VIP areas, and its signature u-shaped bar. There will be live music seven days a week.

The first ticketed show at The Rustic will start off with performers Lukas Nelson and Margo Price on November 16. Nelson is currently on tour with a new album, which includes backing vocals from Lady Gaga. He is also the son of Texas country music legend Willie Nelson.

Eight Row Flint, 1039 Yale, has a new and bigger food truck, and a new and bigger menu to go along with it. They will still be turning out tacos, as they have for nearly three years, but the expanded menu will also include tasty treats like street corn hush puppies and wings. There will be more substantial fare, too, like carne asada and the Cemita burger.

ERF has a generous happy hour, running Monday through Friday from 2 p.m. to 6 p.m., offering $3 tacos and a selection of $3 beers and $5 cocktails. On September 25, it will host "No Excuses Vote 2018", an event in tandem with The Skimm, a company that registered 100,000 voters in 2016 and is looking to do the same for the 2018 mid-term elections. The event is from 6 p.m. to 8 p.m., so if you aren't yet registered to vote or you have a couple of buddies who need to wake up and be part of our nation's political process, lure them with promises of beer and tacos to Eight Row Flint next Tuesday.
KEEP THE HOUSTON PRESS FREE... Since we started the Houston Press, it has been defined as the free, independent voice of Houston, and we'd like to keep it that way. With local media under siege, it's more important than ever for us to rally support behind funding our local journalism. You can help by participating in our "I Support" program, allowing us to keep offering readers access to our incisive coverage of local news, food and culture with no paywalls.
Make a one-time donation today for as little as $1.