POST Houston, 401 Franklin, will open November 13 with a grand opening extravaganza. The adaptive reuse project has completely transformed the Barbara Jordan Post Office into a mixed-use property for cultural, culinary and commercial concepts. Its international food and market hall will feature over 30 vendors and its Skylawn will offer a large rooftop park with an urban garden. There will also be office and retail space plus art installations. Its concert venue, 713 Music Hall, will open November 17 with an inaugural performance from Texas's favorite son and country music outlaw, Willie Nelson. A lighted spiral staircase is a stunning centerpiece.
Photo by Kat Ambrose
The grand opening begins at 11 a.m. and lasts through 2 a.m. the following day with live music, yoga, a luxury car show and more.

As for the restaurant and food concepts, the choices include Tex-Mex, Thai, South American, Mediterranean and Filipino. Here's a list of just some of the new food hall vendors that are opening at POST Houston: Andes Cafe will open this weekend with ceviche and South American dishes.
Photo by Kat Ambrose

Andes Cafe will open November 13 with a limited menu starting out but by mid- December, it plans to debut its reservation-only ceviche bar. The restaurant comes from brothers David and Antony Guerrero, who were born in Ecuador. The menu focuses on the South American cuisine of the seven countries along the Andes mountains. The soft opening menu will feature dishes like Lomo Saltado, a Peruvian dish of beef stir-fry that marries the country's Chinese-immigrant cuisine with the potato-centric fare of Peru with rice and French fries. Some of Andes Cafe's favorites like Cachapa, a Venezuelan corn pancake, and Empanadas Colombianas will be on the opening menu along with Ceviche Pescado.

Andes Cafe operated in East Downtown at 2311 Canal for almost six years before relocating to Bravery Chef Hall in May 2020. That location closed in February 2021 to prepare for its relocation to POST Houston. Over the years, chef David Guerrero battled brain cancer while continuing his culinary training and operating his restaurant. Now, he is bringing back the local favorite. 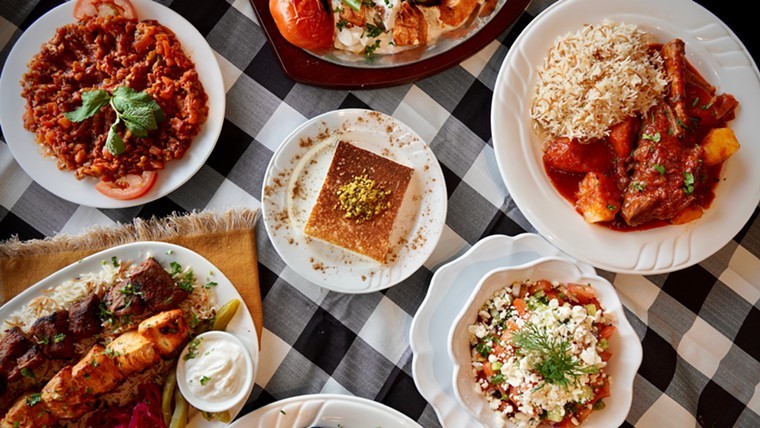 The Butcher's Burger and its parent butcher shop, Salt & Time, join a number of other Austin-based concepts opening at POST Houston. Owners Ben Runkle and Bryan Butler's experience with sourcing meat directly from ranchers for their Salt & Time Butcher Shop guarantees that the burgers at their new concept will be winners.  At Salt & Time, which is also opening at POST, patrons will find a boutique grocery store and high quality locally-raised meats and house-made sausage and charcuterie.

ChopnBlock by chef Ope Amosu will bring West African flavors to the food hall after having been a successful pop-up which was featured in an appearance on Marcus Samuelsson's television show, No Passport Required.

East Side King will open November 13 and comes from James Beard Award winning chef Paul Qui and Moto Utsunomiya who met while working at Uchi/Uchiko  Japanese restaurants in Austin. East Side King first opened as a food truck behind Liberty Bar in Austin before expanding to a brick and mortar on South Lamar serving fare like Thai Chicken Kaarage and Pork Belly Buns. Eastside King helped to launch Qui into superstar chef orbit only to be brought down by domestic violence charges in 2016, as reported here in the Houston Press. Qui opened up his restaurant Aqui in Houston in August 2017 but it closed in May 2018. East Side King is a return to Houston for Qui, who was born in the Philippines. He is also opening Soy Pinoy, a Filipino restaurant, at POST Houston. It will offer dishes like lumpia and fried chicken adobo. 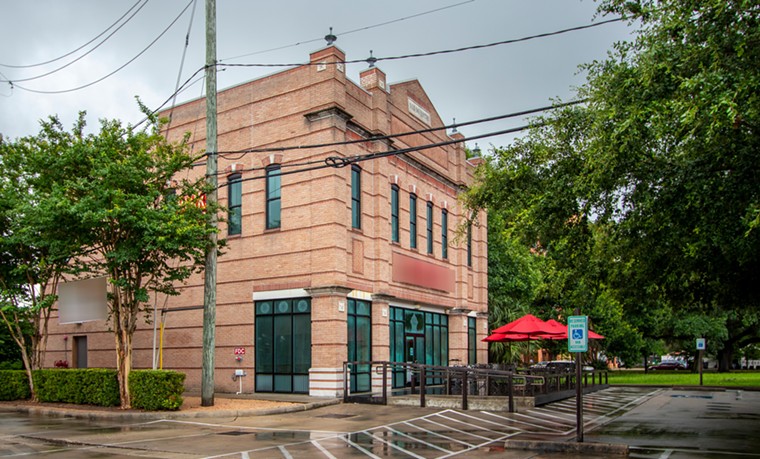 Bluestone Lane is bringing Flat Whites to the Heights.
Photo by Bluestone Lane
Bluestone Lane, 115 W. 19th, is shooting to open in early 2022. The Australian-inspired lifestyle brand was founded in New York City in 2013 by Nick Stone. It currently operates 51 premium coffee shops and cafes across the United States. It is known for introducing the American public to the "Flat White," an Australian (unless you ask a New Zealander) coffee invention from the 1980s. Similar to a latte, or a cappuccino, or neither, according to who you are talking to, it's a trendy coffee drink with a milk foam that is similar to other espresso-based beverages that use steamed milk. Bluestone Lane also claims to be the brand that introduced "Avocado Smash" to the U.S., which most clean-eating folks would recognize as avocado toast. According to The Washington Post, Australian chef Bill Granger may have been the first to add the creation, which has been around for over a century,  to his restaurant's menu, thereby unleashing a green monster that has since invaded every cafe, coffee shop and brunch menu across the world. A drone's eye view of W. 19th.
Photo by Bluestone Lane
Whatever the history of flat whites and avocado smashes, Bluestone Lane's appeal to a public looking for superior coffee and healthy dining options has contributed to its popularity, making it one of Inc. 5000's fastest growing private companies based in New York City. It also offers packaged goods for consumers such as whole bean coffee, coffee pods, teas, sparkling waters and cold-pressed juices.

This is the first foray into Texas for the company and of course they chose the best city in which to make their debut. The Heights property is owned by Wolf Capital partners and the two-story structure will offer 4,400 square feet of space, divided evenly on each floor. There will also be a large outdoor seating area. The building was recently the home of Beck's Prime which closed in late September 2021.

Bombetta, 3641 W. Alabama, had a soft opening October 26 according to its Facebook post but an official opening date has not yet been announced. A phone call to the Italian restaurant resulted in a message saying that Bombetta was open but still in soft opening mode. We have reached out for more information and will update our readers when we have a confirmation. 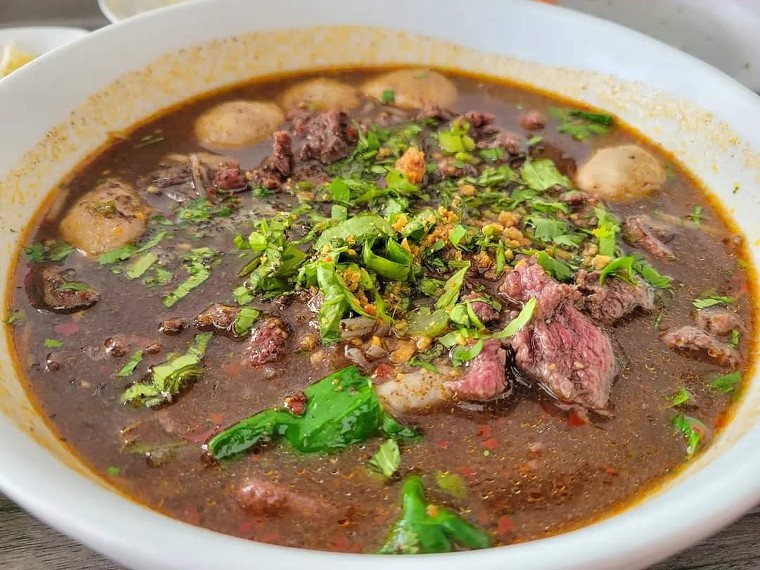 Pho me up, buttercup.
Photo by Stevie Vu
Sao Lao Thai Cafe, 5013 N. Shepherd, softly opened October 21. Owners Souli Phaduangdet and her husband Juan Tapia have realized their dream of owning a brick and mortar restaurant after having successfully operated the Thai-Mexican fusion Pho-jita food truck for 10 years. Though loyal fans will miss "the elephant", as they call the food truck, the new restaurant offers customers a taste of Souli's Southeast Asian heritage with dishes like Tom Yum with shrimp, Lao Sausage with sticky rice and Lao tomato sauce and Filet Mignon Beef Laab. For a tummy warmer, the Thai/Lao Pho is a dish of noodles and ribeye served in a beef broth that has been simmered for 15 hours and topped with quail eggs, cilantro, green onions, bean sprouts and basil. The restaurant is also very accommodating to vegetarians. 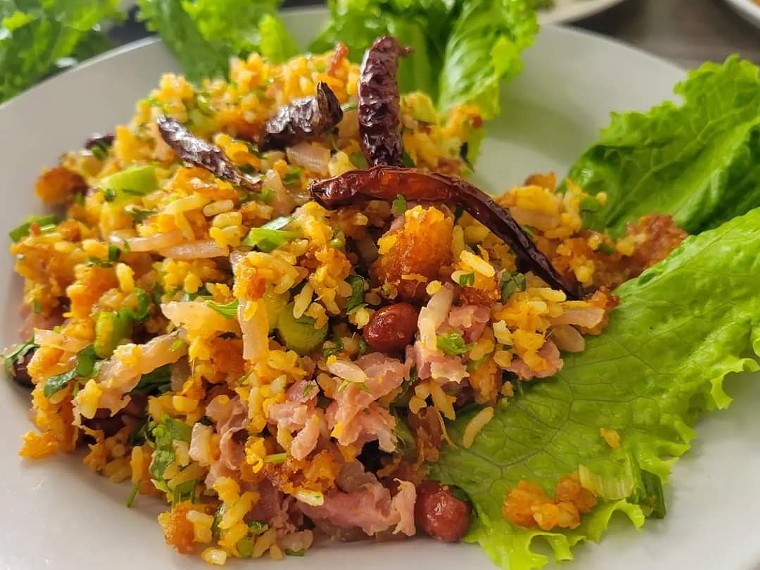 The nam khao offers diners a little extra heat.
Photo by Stevie Vu
Phaduangdet told the Houston Press that they hope to bring in more items from the original food truck as they build up their staff. For now, the restaurant is BYOB with a $5 cork fee, except on Tuesday when guests are welcome to bring their own beer or wine with no cork fee. 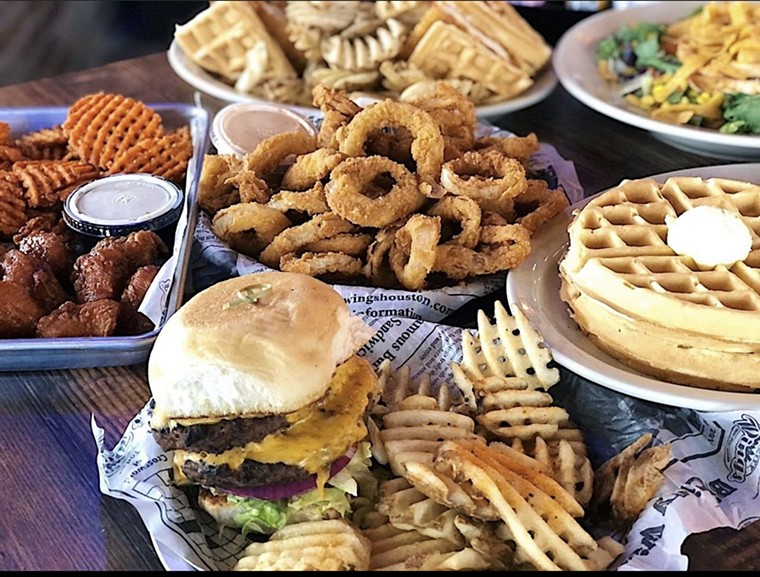 There is more than just wings at Big City Wings.
Photo by Sam Elsaadi
Big City Wings, 2240 Navigation, will open in EaDo in early December. This will be the eleventh location for the wing concept from Sam Elsaadi and will be the first to have a large LED video wall panel for viewing sports. The new location took over the spot vacated by Cajun Town. Elsaaidi and his team gave the space a full remodel, adding a bar and building a patio cover outside.

The menu is extensive at Big City Wings and filled with things that one would expect at a sports bar like fried mushrooms and Fried Pickle Spears plus starters such as its Dumpster Fires, waffle fries topped with pulled pork, barbecue sauce, melted cheese, green onions, tomatoes and chipotle barbecue sour cream. It has a good selection of burgers and sandwiches plus bone-in or boneless wings. Its Big City Spuds are loaded baked potatoes with a variety of fillings. There is a kids menu and frozen smoothies plus a full bar and plenty of cold beer.

The brand is going strong in the Greater Houston area with another location planned for 9115 FM 723 in Richmond by late January.

Shiva Indian Restaurant, 2514 Times Boulevard, will relocate to 5220 Buffalo Speedway early next year, according to Houston Business Journal. The restaurant has been at its Rice Village location for thirty years serving solid Indian fare like Lamb Roghan Josh, Chicken Vindaloo, Shrimp Chili and a variety of tandoori and biryani dishes plus a large selection of vegetarian options such as Dal Basanti, Gobi Alloo and Malai Kofta.

Until its move, the restaurant will continue to operate for dine-in and online ordering for take-away at its current and original location. 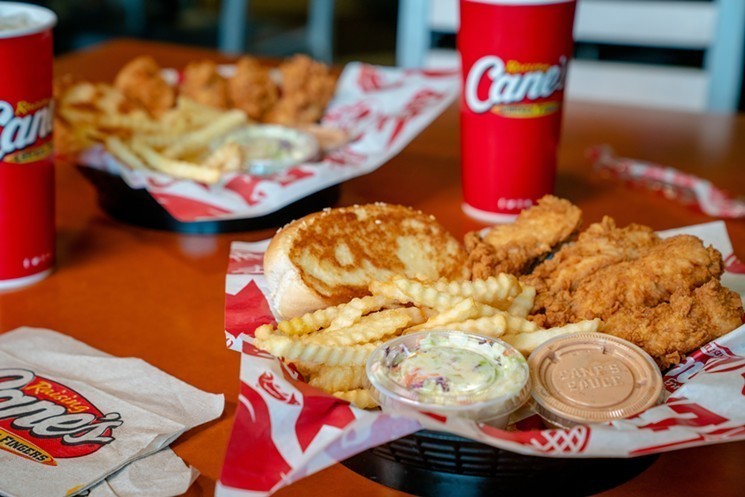 Houstonians are turning into Caniacs.
Photo by Joel Bordelon
Raising Cane's, 7351 FM 1960, will open November 16. Customers should arrive early that morning to enter to win "Free Cane's for a Year". There will be 20 winners drawn and entries will be accepted beginning at 8:30 a.m. with the drawing at 9 a.m. Customers must be 13 years and up to enter the drawing and also to be eligible to receive a free t-shirt and a free box combo card for the first 100 dine-in customers. The card is redeemable for the next visit.

The grand opening celebration will feature host Mario Gomez from Hot 102.9 from 1 p.m. to 3 p.m. Raising Cane's will present both the Harris County Sheriff's Office PAL Program and the Atascocita Volunteer Fire Department P.A.L.S. with $1,500 each.  There will be another family-friendly event November 18 for the community to meet first responders, check out police cars and fire trucks and preserve memories with the fun photo booth.

The chicken finger concept was founded in 1996 in Baton Rouge, Louisiana and is quickly nearing 600 restaurants across the United States and the Middle East. Its loyal fans are called Caniacs and there must be a lot of them in the Houston area because the brand is continuing its Bayou City expansion with a Cypress location December 1 at 8956 Barker Cypress and another store at 13480 Northwest Freeway December 14, bringing the Houston total to 46.
KEEP THE HOUSTON PRESS FREE... Since we started the Houston Press, it has been defined as the free, independent voice of Houston, and we'd like to keep it that way. With local media under siege, it's more important than ever for us to rally support behind funding our local journalism. You can help by participating in our "I Support" program, allowing us to keep offering readers access to our incisive coverage of local news, food and culture with no paywalls.
Make a one-time donation today for as little as $1.