The Best Queso in Houston 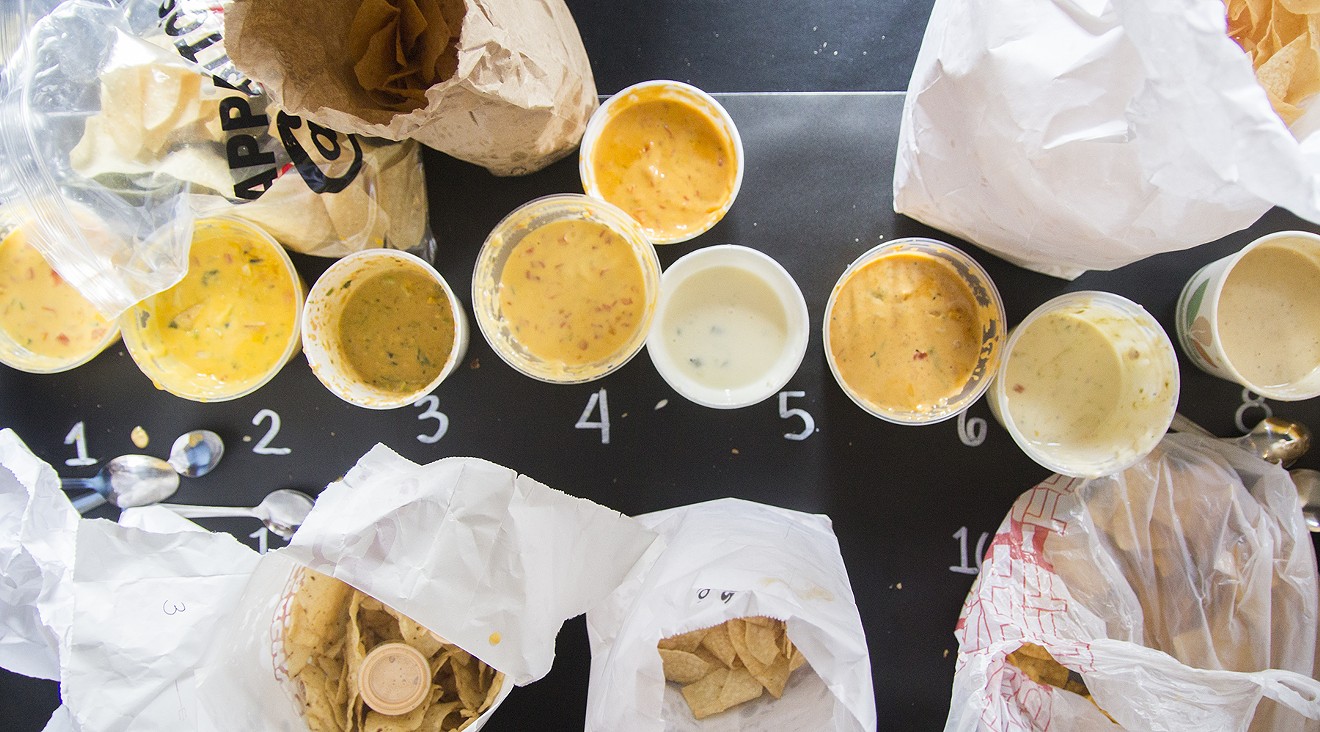 More than 25 tasters sampled and rated 20 quesos to find the best in Houston. Photo by Erika Kwee

I truly can't say whether this taste test was born out of a scientific curiosity around queso, or just an unquenchable, gluttonous thirst to exist in a room with 20 containers of hot, creamy cheese. I suspect the latter, but if this specific brand gluttony was going to happen, at least it happened in Texas. Judging by Chipotle's latest venture into queso, it seems that perhaps only Texas truly grasp how to execute the crucial Tex Mex delicacy that is sometimes referred to as chile con queso, but never “queso cheese dip” (ahem, Google). Sometimes consisting of just processed cheese and a can of tomato-laced chilies, the finished product is generally much more than the sum of its parts.

In order to find the most elevated sum of its cheesy partts in Houston (or maybe just to eat a whole heck of a lot of cheese), we took on the task of gathering 20 of Houston’s finest quesos into one room and tasting them all side by side. Chipotle, take note.

For the sake of simplicity, we only chose quesos from Tex Mex restaurants or establishments that mostly serve Mexican food. Tasters rated each queso on a scale of 1-10, and each accompanying chip on a scale from 1-10. The scores for each category were aggregated for two overall average scores.

Torchy’s: With an average score of 7.7, Torchy’s easily landed the top spot on the list with a distinctively full-flavored, ever-so-slightly chunky queso studded with bits of green and red peppers that blasted flavor. Many tasters noted that it was spicy (especially relative to other quesos), which many loved—“perfect amount of spice, and not overwhelmingly greasy,” commented one taster. Was I a little disappointed that the ubiquitous and much-loved, though predictable, Torchy's won the tasting? I'd be lying if I said no. One factor that may have tipped the scales in Torchy's favor was its branded bag of chips that may have tipped tasters off in an otherwise blind tasting.

La Grange: Without the nostalgia factor that incumbent Torchy’s seemed to hold, I have a feeling La Grange might have overtaken first place. With a rating of 7.3, tasters loved the thick, creamy texture of La Grange’s white queso. Tasters also liked the chunks of red pepper that lent visual interest to the overall rich and flavorful dip. For those who don't love spicy, this queso may be for you—a few tasters commented that this was "super mild."

Pappasito’s: With an average score of 6.3, tasters praised Pappasito’s for being a delicious, straightforward queso. Although some found the chunks of onion permeating the queso to be distracting, most thought the onions lent the queso a savory, umami flavor.

Pico’s (6.10): "This is what I think of when I want queso; perfect tang, perfect spice, perfect consistency," said one taster. Others complained it was a little salty and a thinner-than-ideal consistency.

El Big Bad (6.07): Tasters tried both plain queso and with chorizo; the latter was the clear winner. "The chorizo added a lot of much-needed flavor to the otherwise thick and slightly bland cheese," said one person.

Liberty Taco (6.00): "Tastes like a wannabe Torchys," said one taster. Liberty, take that as a compliment. Others described the queso as "tangy," "cheddary," and "bold, with an almost spinach-artichoke-esque flavor." 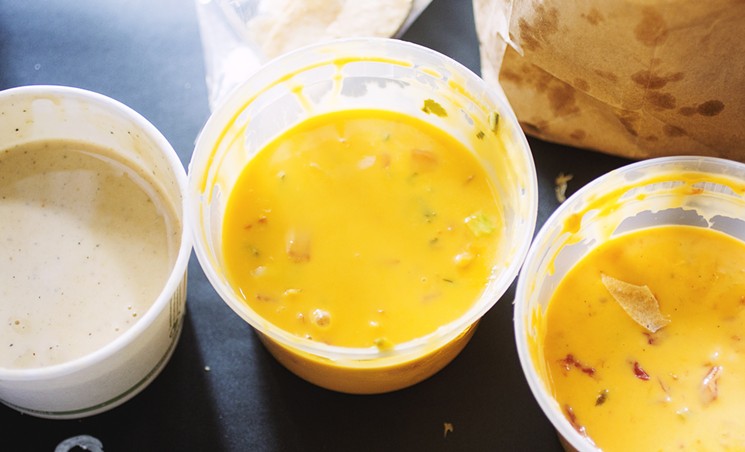 The Rest of the Quesos

El Real (5.96): "Tastes like college," said one taster. Also described as: "nacho-like, very Velveeta-esque. Not sophisticated but reliable, thick and maybe too salty."

Chuy's (5.96): "Tastes like it has taco seasoning. Lots of spices and good consistency—like a spicy cheese sauce."

Velvet Taco (5.56): "Different in a good way, reminds me of Thai food. At first I didn't like it but then it grew on me— lots of kick, but maybe too limey?"

El Rey (5.42): "I could eat this all day", cheddary, tangy, sharper than most, slight synthetic taste

Pistolero's (5.13): "Just alright, a bit bland and plasticky-tasting," said one taster. Another taster described it as "extreme nacho cheese taste" with a "bad aftertaste."

Lupe Tortilla (4.62): "Queso is weirdly sweet, too thick, and has an assertive Velveeta flavor."

Fusion Taco (4.36): "Weirdly smoky flavor, not the way I think queso should taste. Cheese reminds me of frito pie, not great aftertaste."

Original Ninfa's (4.25): "Way too watery. Too much effort to hold queso on the chip from dip to mouth. I like the fresh veggies though." 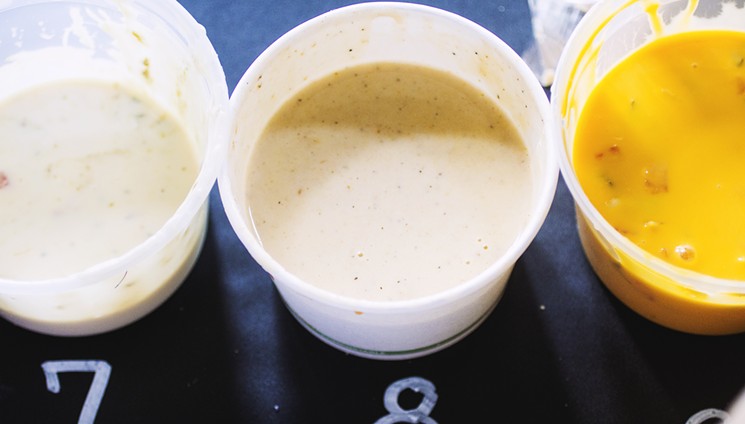 While the focus of this tasting was on the queso, we figured we might as well rank the chips while we had them.

Torchy’s: Torchy’s walks the line between the wafer-thin Chuy’s-style chips and the thicker, straight-up-fried-tortilla-style with a medium-thick chip that is nicely crisp with tiny spots of char. With an overall score of 7, it’s possible that the halo effect of Torchy’s distinctive queso may have spread to the chips.

Pappasito’s: With an average score of 6.5, many described Pappasito’s as having a “solid all-around chip.” The super thin, light and crispy texture was a big crowd-pleaser.

El Real Tex Mex: These chips scored an overall 6.4 average score. One taster described these chips as the “best-ever,” while another taster noted they could use more salt. (In case you’re curious, its queso scored a respectable 7th place with a nacho-like queso that many noted was very “Velveeta-esque.”). 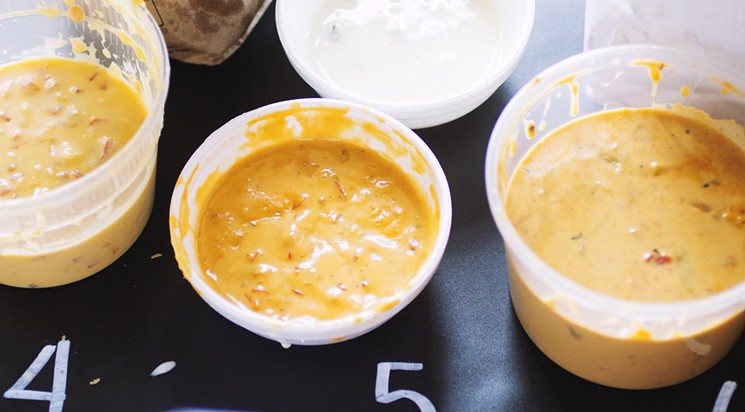 And in case you're interested, here are the overall rankings for both queso and chips for each of the participating restaurants: 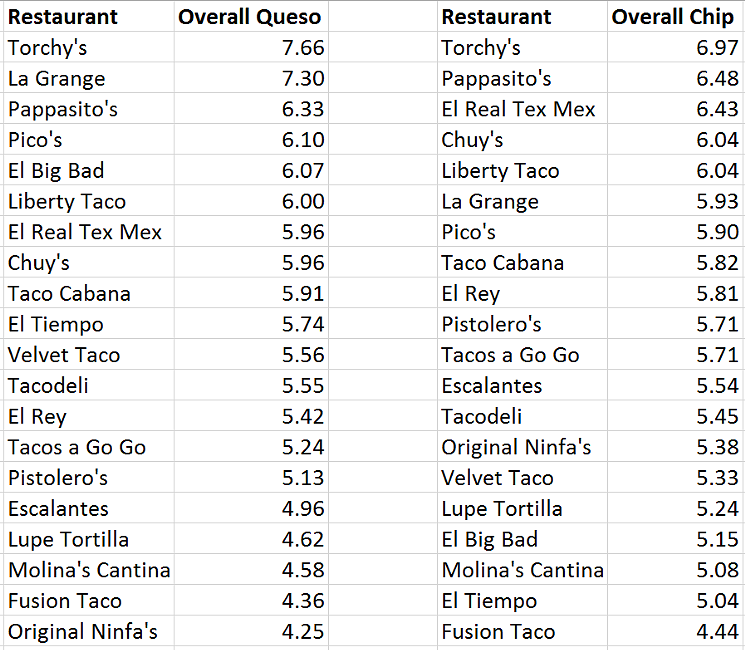 Of course, if you have a favorite queso spot, by all means—don't let us stop you, and don't let this article prevent you from enjoying some gooey goodness at Original Ninfa's with their bomb fajitas just because a few tasters thought it was a little runny. Can melted cheese ever really be bad? We think not.

And speaking of disappointment in the ratings, just a note that my personal favorite chips were from Molina's Cantina, which absolutely tanked in the chip ratings due to a "smoky" flavor and "too thick" texture that most tasters didn't like. I, however, am team #thickchip for life and highly encourage you to indulge in Molina's crisply fried, substantial chips that are cleverly packed in a plastic bag so they don't get depressingly soggy after the first day (like virtually every other paper-bagged bag of chips).

Did we miss a queso? Let us know in the comments!