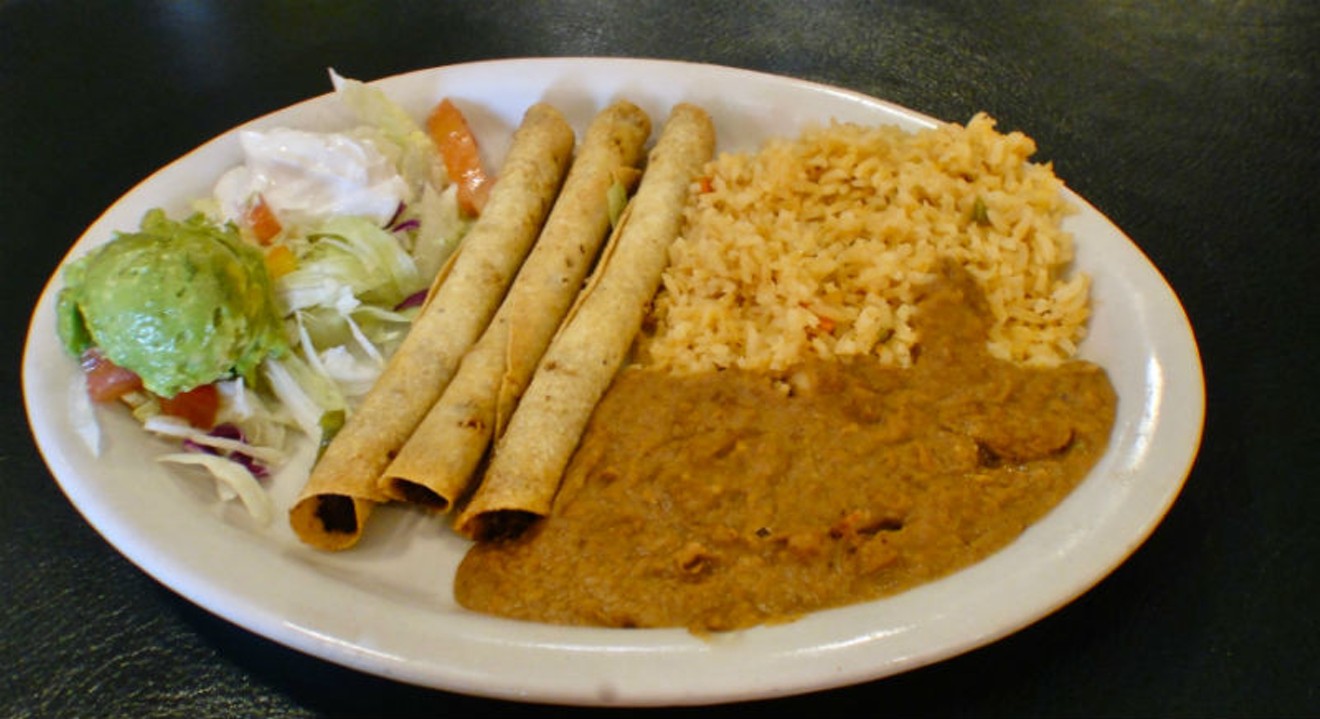 Merida’s crispy flautas can be ordered with chicken or beef. Photo by Adán Medrano
This is the first in a series of visits to the six-cluster of Mexican restaurants on Navigation, a group of eateries that exemplifies Houston’s indigenous culinary history.

The corn tortilla chips at Merida Mexican Restaurant are crunchy and sturdy, efficient scoops for the salsa ranchera, served warm. Upon request, the kitchen will prepare a second salsa that’s served room temperature and has less tomato flavor and more aromatics than the salsa ranchera. It’s a little hotter and is topped with fresh diced jalapeño, white onion and chopped cilantro. Both salsas are a must, not just for chips but also for the entire meal.

Elyssa Acosta manages Merida Mexican Restaurant and does a weekly tasting, quality control, to insure that her grandmother’s recipes are as delicious as she remembers from her childhood.
Photo by Adán Medrano
A family-owned restaurant, Merida is named after the capital of the Mexican state, Yucatan, in the Mayan region, the southern coast of the Gulf of Mexico. Olga Acosta and her husband, Rafael F. Acosta founded it in 1972. Their son, Rafael Acosta Jr., now owns the restaurant and he works with his daughter, Elyssa Acosta, who manages the restaurant and does a weekly tasting to insure that the kitchen stays faithful to the original recipes of her grandmother, an expert in Yucatan cuisine.

Rafael says that the space was originally less than half the current size, and he recalls that on the opening night, they had so little money they couldn’t buy enough chairs. He fights back tears as he recounts that their neighbors surprised them by bringing over some plastic chairs. When they opened that first night, the restaurant filled with customers, and growth and success ensued. It’s a success based on something that people in Houston have been doing for 2,000 years: connecting Texas with southern Mexico.

Merida’s menu is a composite of Texas Mexican and Yucatan Mexican. In the “Yucatan Specialties” section, front and center is the iconic dish of Yucatan, Cochinita Pibil. It’s pulled-pork that’s slowly baked in citrus juices, herbs and principally flavored with annatto, a brick-red seed native to that Maya region of Mexico. Served with black beans, rice and garnished with pickled red onion, it’s ready to be piled on a corn tortilla for steaming tacos. The serving size is very generous.

Cochinita Pibil is a Yucatan classic pulled pork dish slow cooked with the Annato seed that is native to the Mayan region of Mexico.
Photo by Adán Medrano

Two other classic Yucatán Mexican dishes are panucho and salbute, both made with freshly pressed corn tortillas. For the panucho, the tortilla is split open, filled with black beans then fried. For the salbute, the raw corn tortilla is first fried, and then topped with black beans and assorted meats and greens. The server explains all of this, and there are pictures in the menu. The “Merida Special” let’s you try all three, served as a combination plate, a la Texas Mexican style.

Yucatan combination plate: beef empanada; cochinita pibil taco; panucho; salbute with salad; pickled red onions; fried black beans and guacamole.
Photo by Adán Medrano
It’s the black beans that couldn’t at first find acceptance in Houston, back in 1972 when Olga and Rafael Acosta decided that Yucatan food was going to be their distinguishing, marketing advantage. Yucatan Mexican was their unique niche among the Texas Mexican restaurants in the East End, so they began offering black beans for free, an invitation to taste. Forty-seven years later, there are customers who want black beans even with their Texas Mexican enchiladas, instead of the traditional pintos.

Not many Texans know that the Karankawa people who lived in Houston and Galveston 2,000 years ago traded with the communities in southern Mexico. They built travel routes that later the Spanish also used and which they named the Camino Real. Actually, Houston was quite a cosmopolitan place, according to Dr. Alston Thoms, Professor of Anthropology at Texas A&M University. He explains that this region was the center of constant communication, with trade fairs that drew people from as far west as the hill country, and lasted for a couple of weeks.

Descendants of Native Americans like the Karankawa, Lipan Apaches, Tonkawa and others, continue to live in Houston which has the largest population of Native Americans in Texas, according to the U.S. census. However, their name was officially changed to “Mexican” in 1837 by the Texas Standing Committee On Indian Affairs in its report to then President Sam Houston: “The People called Lipan, Karankawa and Tonkawa your Committee considers as part of the Mexican nation and no longer to be considered as a different People.”

Indigenous peoples, now called Mexican, continued cooking and those are the native roots of today’s Texas Mexican food. The flour tortilla is absolutely iconic in this region, and I found Merida’s to be just plain yumola! It’s the style that I grew up with, a pliable and fluffy white tortilla with dark brown spots from cooking just seconds on the comal (griddle) and ballooning into a puffy beauty. Oralia De La Rosa rolls each one by hand using a palote (rolling pin). She’s fast, and she’s been making Merida tortillas for 17 years. Oralia is from Nuevo Laredo and she learned to make flour tortillas from her mother. She uses high gluten flour and the added water has to be hot.

Oralia De La Rosa learned to make flour tortillas from her mother in Nuevo Laredo. She uses high gluten flour.
Photo by Adán Medrano
Flour tortillas are de rigeur with the Texas Mexican dishes on the menu, which make up the majority of items. The carne guisada tastes just like momma’s cooking, with the beef cubes generously larger than the home version and, again, yum! Nachos are baked according to Mr. Nacho Anaya’s original 1943 recipe, except the jalapeños are served on the side. The all-encompassing menu delights with tacos, tortas, quesadillas, flautas and combination plates.
click to enlarge

Carne Guisada Plate, is classic indigenous home cooking. Merida owner Rafael Acosta Jr. says, “We are not Tex-Mex.”
Photo by Adán Medrano
The full bar of course serves frozen margaritas and, much to my liking, they’re not too sweet. A wide selection of Mexican beers will please aficionados,

From chips to cochinita pibil, Merida celebrates Houston’s delicious native culinary history, as do the other Mexican favorites that form the restaurant six-cluster on Navigation.
KEEP THE HOUSTON PRESS FREE... Since we started the Houston Press, it has been defined as the free, independent voice of Houston, and we'd like to keep it that way. With local media under siege, it's more important than ever for us to rally support behind funding our local journalism. You can help by participating in our "I Support" program, allowing us to keep offering readers access to our incisive coverage of local news, food and culture with no paywalls.
Make a one-time donation today for as little as $1. 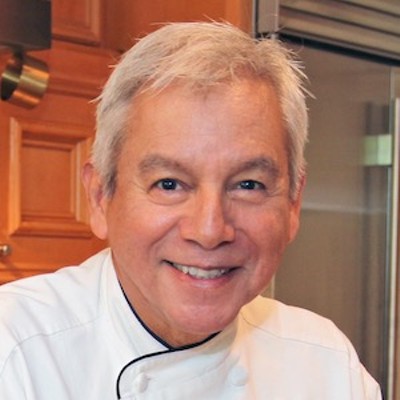