Recently, the Houston Press was invited to check out some of the new menu items which will be on offer at the Toyota Center when the Rockets start their new season October 24. "Sure," I thought, "I'll eat some nachos and hot dogs. Big sweater weather is here, anyway."

My tasting coincided with the Rockets Open Practice. With the chance to watch some of the team shoot hoops, $3 hot dogs and 50 percent off select merchandise, families took advantage of the Columbus Day holiday and made their way downtown.

There was also free parking that day at the Tundra Garage, which meant I found myself circling it several times before I gave up and found a metered spot at Root Memorial Square. While there are reviews online concerning the park's basketball court not being kid-friendly, this day it was taken over by young James Harden wannabes because of the holiday and Rockets free event.

It's almost Rockets go time!
Photo by Lorretta Ruggiero
When I arrived for the tasting, I was met by Hunter Segesta, the Digital Marketing Manager, and taken through a long hallway, passing by a rack of basketballs and the Rockets' laundry room. I was led into the Lexus Club where the chefs awaited me with a presentation of the new concessions and menu items.

Carlos Rodriguez, the Corporate Executive Chef for Landry's Saltgrass Steakhouse, showed me the new menu items for the Saltgrass Steakhouse and Bar, located at 106 in the Main Concourse.  Everything was laid out against black tablecloths and while there were nachos and tacos, these were a step (or three) above the normal concession stand fare.

The Vaquero Tacos at Saltgrass.
Photo by Lorretta Ruggiero
Eddie Romero, chef for the Red and White Wine Bistro, presented me with the new, rotating dishes for the chef's table buffet. Choices will vary at "action tables", as Romero calls them, and could include choices like beef empanadas, churrasco sirloin steak, grilled lamb T-bone with balsamic, rosemary and a Cabernet demi-glace and bacon and jalapeno wrapped pork medallions with a spicy orange marmalade and horseradish. There was also a ricotta-feta crostini with chorizo and fig preserve.

After explaining some of the dishes to me, the staff presented me with a line of different foods to try. Now, I like to eat, but as I was all by my lonesome, this was a bit overwhelming. However, I approached the bar and began to make my way down the line of food.

The rock shrimp quesadilla is a hands-on dish.
Photo by Toyota Center
First up was the Nashville Hot Chicken Tenders from Saltgrass, served with a spicy slaw. Both Segesta and I agreed that this was one of the best new dishes. The tenders were cooked perfectly, nice and crisp. However, if I have one smidgen of a complaint is that the sauce was a bit sweeter rather than hot. I realize they are cooking for a variety of folks and not everyone wants the sweats when they eat, but I could have used a bit more heat. The tenders are also served in a sandwich with waffle fries ($15). 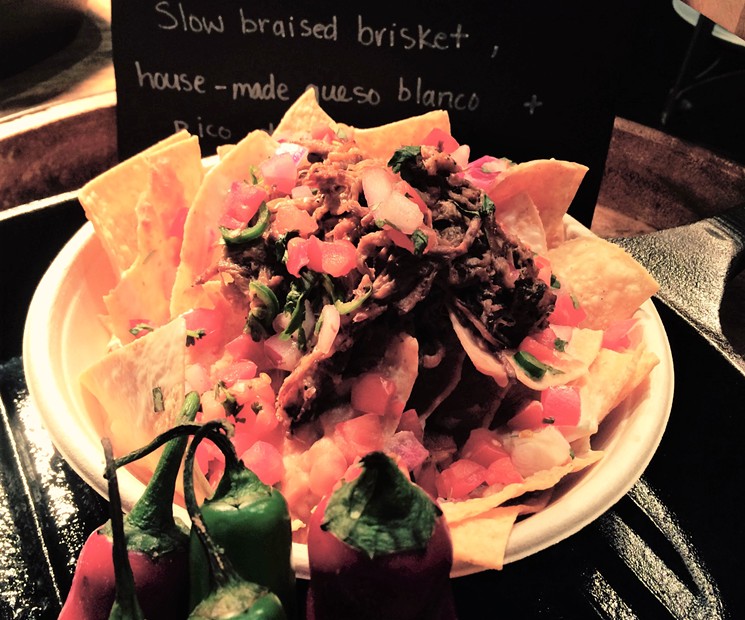 The brisket nachos are enough to share.
Photo by Lorretta Ruggiero
The Brisket Nachos ($14) from Saltgrass were tasty, especially the queso blanco that covers the chips. The brisket was good, but another nacho dish that I tried, the ropa vieja was tastier. However, I liked the generous hand with the pico de gallo. Some places are so chintzy with it. Saltgrass also has a beef tenderloin skewer ($15) which had tender cubes of beef with onions, peppers, chimichurri and is served with waffle fries.  I did not get to taste the waffle fries, so I cannot comment on those. Another dish on the new Saltgrass menu is the Vaquero Tacos ($15) made with slow braised brisket, pickled slaw, sriracha mayo and pico de gallo.

The Big Tex is big on flavor and heat.
Photo by Toyota Center
I moved onto the offerings from Haute Dog, which is located in Section 109 in the Main Concourse. There are two new foot long hot dogs. The Street Corn Dog ($10.75) had elote con queso, fresh red jalapenos and smoked pepper mayo. I asked Romero what kind of cheese they used and he said it was parmesan and cotija. I would have liked to see more cotija and I did not see any chili powder or chili lime salt, which I think would give the elote dog a bit more zing. To be fair, I didn't take more than one bite, because I was extremely self-conscious of the five pairs of eyes watching me eat. I probably would have tasted more of the smoked pepper mayo had I really dug in.

The dog that stood out to me was the Big Tex Sausage ($12). It's a 1/4 lb. spicy jalapeno and cheese smoked sausage with a six-pepper relish, chili arbol salsa and chipotle aioli. The sausage was juicy and had a nice kick on top of everything else that was going on. The pepper relish was an added bonus,sweet and spicy.

The ricotta-feta crostini is pretty and delicious.
Photo by Lorretta Ruggiero
The new item at Stand 113, Bud and Burgers, is the Honey Crisp Apple Rosemary Turkey Burger ($15). It's dressed with Muenster cheese, pepper bacon and BBQ aioli. This was one of Chef Romero's favorites, but turkey burgers just don't light my fire. However, I liked the addition of the fried apple crisps on top. It was a good dish, if you're a fan of turkey burgers.

These are our kind of nachos.
Photo by Toyota Center

At the HTX Brew and Grub, located at stand 115, there are several new rotating items on offer. The cart only has one of the items at a time, so certain items won't always be available. There are the loaded tater tots with chopped barbecue brisket ($14), rock shrimp  and pepper jack quesadilla ($15) and the ropa vieja nachos ($15). Of the three new dishes, you're going to hope it's ropa vieja day. It's a mess of blue corn tortillas topped with black beans, ropa vieja stew, jalapeno cheese sauce and sweet plantains. The meat made that dish.

Fine dining is available at Red and White Wine Bistro.
Photo by Toyota Center
The Toyota Center also has the Red and White Wine Bistro for those looking for a finer dining experience and a great view of the Rockets game. Guests can order off the menu or make reservations for a timed seating and enjoy the chef's table buffet. It's $45.95 for adults and teens, $19.95 for ages 6 through 12. Items rotate at each event but of the new dishes,  I really liked the beef empanadas with their gorgeous, golden pastry and the ricotta-feta crostini. The combination of sweet fig preserve, creamy cheese and slightly spicy chorizo was a winner. The lamb was beautifully cooked and of course, a Cabernet demi-glace with rosemary and balsamic are the perfect flavors to accompany it. The pork medallions were juicy due to the bacon wrapping and the orange marmalade tempered the horseradish cream. The churrasco sirloin steak was tender and flavorful and enhanced by the herbal freshness of the chimichurri sauce.

While the prices are always going to be steep at these events, some of the dishes were definitely big enough to share. With today's "foodie" climate, everyone is stepping up their game, including stadium concessions. Let's hope the Rockets step up their game this year, as well.
KEEP THE HOUSTON PRESS FREE... Since we started the Houston Press, it has been defined as the free, independent voice of Houston, and we'd like to keep it that way. With local media under siege, it's more important than ever for us to rally support behind funding our local journalism. You can help by participating in our "I Support" program, allowing us to keep offering readers access to our incisive coverage of local news, food and culture with no paywalls.
Make a one-time donation today for as little as $1.