Second Time Around Was the Charm at Rise No. 2 The bananas Foster soufflé is, in a word, incredible. Photo by Troy Fields
The salad Niçoise was crafted with a generous mound of spring-mixed greens tossed with thinly sliced red onions, capers and olives piled atop roasted fingerling potatoes. Six small slices of seared ahi tuna, rubbed with toasted sesame seeds, and wedges of a boiled egg flanked the hill of greens. From our seats, we were lucky enough to catch the salad’s creation. The sous chef took an unusual amount of care constructing the plate, and it was well worth the wait.

Rise No. 2 opened a little more than nine months ago, at the corner of San Felipe and Post Oak above Peska Seafood Culture. The charming French-inspired restaurant fits in perfectly with the upscale neighboring eateries Sozo, North Italia and True Food Kitchen in BLVD Place. The center is anchored by an oversize Whole Foods, which has its own brewpub.

Born from the childhood recollections of Francophile Hedda Gioia Dowd, the restaurant first opened its original location in Dallas in 2008. The tradition of savory and sweet soufflés has been in her family for generations and along with her longtime friend, chef Cherif Brahmi, Dowd aimed to bring the versatility of the soufflé to the table for diners.

The lunch hour is sprinkled with soft conversation in the main dining area. The corner booth-table was chosen to get a full view of the restaurant. The kitchen seamlessly folds into the space, with only a waist-high counter dividing the area, littered with merchandise, books, plates and bowls. 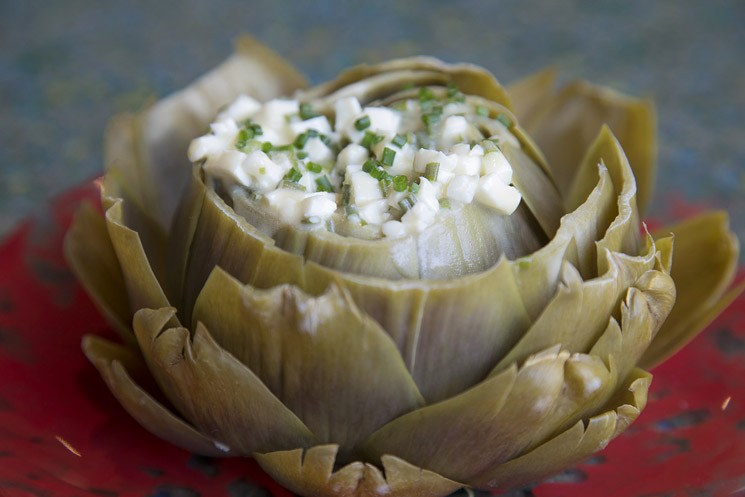 Artichoke andrée is drizzled with a light sauce of emulsified yolk and dijon.
Photo by Troy Fields
Parking is something of a bear. There is a large garage that’s labeled “for Whole Foods Customers Only.” I thought, certainly this is not correct. Why valet on a sunny 70-degree Houston day? After parking, I seriously could not find my way out of the garage on foot. Discouraged, I returned to my car and grudgingly handed my keys to the $6 valet service guys. My guest, arriving 20 minutes late, had suffered the same parking challenges. We laughed about it, but already our lunch was off to a limping start.

The menu is simple, but not brief. Following the starters is a list of savory and sweet soufflés and entrées, a summarized history of the restaurant and its founder, and a list of merchandise available in-store. On both visits, the server recommended the marshmallow soup, mainly because of the wow factor, I assume. Goat cheese is fashioned to appear like giant marshmallows floating in a tomato-y bisque, drizzled with a pesto sauce.

We found the soup underwhelming. The goat cheese did indeed look like marshmallows, but the texture was strange and the bisque itself needed more salt and pepper.

The soupe à l’oignon gratinée (onion soup) was cooked properly, with loads of soft, sweated onions, a few crostinis floating atop and draped with melted Gruyère, but the broth itself lacked the deep beefiness of a good onion soup.

The name soufflé comes from the French verb souffler, which means to blow up or puff up, which describes what happens when a soufflé is baked. Intrigued by the variety of savory soufflés offered, we asked for a recommendation. One of the specials, the crabmeat soufflé, was suggested, but we opted to try something from the regular menu. The jambon and Gruyère soufflé arrived intact and “souffléd.” Normally a soufflé can take up to 40 minutes to bake and rise, but the extra-hot ovens at Rise cut the cooking time in half. We were told that the soufflés here take between 15 to 20 minutes, depending on the type ordered. After they leave the oven, there is a small window of time within which to deliver a flawlessly puffed creation to guests at their tables. The ham and cheese soufflé tasted good, but not gotta-have-this-again good.

We were tickled by the option of ordering a flight of bubbles for lunch. Flights are a whimsical way to try a variety of beverages. For $17, we got two-ounce pours of four champagnes, ranging from dry to sweet. Also available are flights of reds, whites, Bordeaux and dessert wines.

At this point, nothing about Rise No. 2 had spoken to me. The temperature in the dining room was too high, the soft conversation became noise, the server forgot our teapot and then brought us the wrong tea. The soup needed more salt, the dessert needed more sauce and, quite frankly, for a brief moment, Rise No. 2 felt like an upscale Cracker Barrel, with merchandise for sale from the front door to the walls and the window sills. 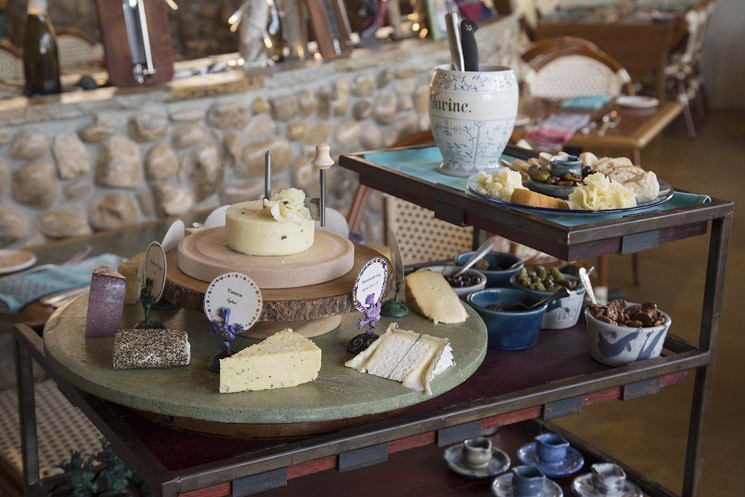 The cheese cart is not to be missed.
Photo by Troy Fields
Thank goodness for second visits. For dinner we were seated at one of the two tables facing the open kitchen area. That stoned wall behind our table buffered our conversation from the rest of the dining space. The buttery, sweet aroma from the ovens wistfully floated by our table throughout dinner. And this time, the meal was remarkable.

Start with the cheese cart. Several imported cheeses are displayed handsomely along with bowls of candied pecans, Grand Marnier-drunken figs, a paste of quince and cornichons. The server explained in detail about each cheese, where it originated and the notes and pairings suggested. Some of the cheeses are finely grated using a French girolle, a circular grater that creates exquisite cheese flowers. Each one sounded divine, but we chose the P’tit Basque, a mild and nutty French sheep’s milk cheese similar to a Manchego; the Boschetto Tartufo, a strong Italian cow/sheep blend with shaved truffles throughout; and the Chimay, a rich and creamy Trappist-style cheese from Belgium with a rind washed in Chimay beer. This was by far the best cheese plate I’ve had in the city.

The artichoke Andreé was also very special. The steamed artichoke was presented with a light sauce of emulsified yolk and Dijon and sprinkled with tiny bits of boiled egg white.

On this visit, the server shared the specials with us, but added the explanation that specials are seasonal and would be available so long as they made sense, sometimes for months. This time we took his recommendation and ordered the crabmeat soufflé. At first glance a soufflé seems too simple to possess any kind of depth. The sweetness of the crabmeat was undeniably present. The creamy egg-based soufflé tasted pillowy-soft and incredibly light. It dawned on me that this experience was not singular. The jambon and Gruyère (from the previous visit), which I had found pleasant yet plain, now became more profound. Baking is often referred to as a science. I realized that what I had thought about the first soufflé, that it was dull and plain, was rather exactness; the second soufflé became the empirical evidence I needed to appreciate the artistry of the soufflé. 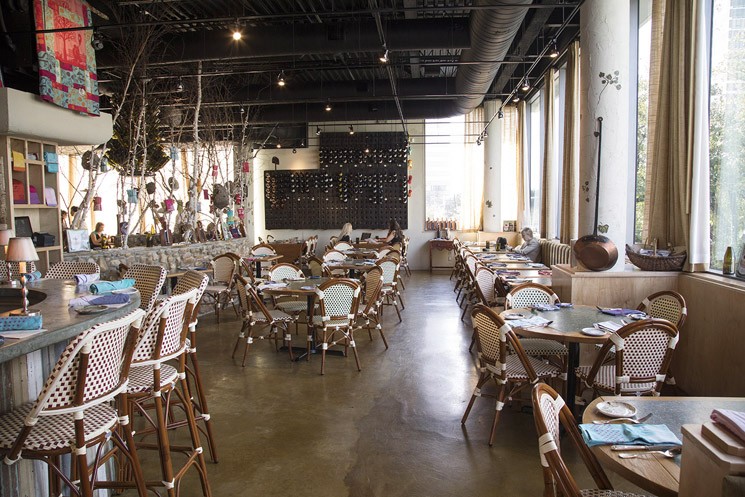 The dining room of Rise No. 2 on Post Oak.
Photo by Troy Fields
Understanding that this is a soufflé restaurant, we were curious how other items would fare. The steak and pomme de terre, a six-ounce center cut fillet presented with roasted fingerling potatoes, haricot vert and béarnaise, made for a delicious entrée. The meat was tender and sliced easily, and the flavor was again simple yet tasty. There was really no need for the béarnaise on the plate.

We ended the meal with an incredible soufflé interpretation of bananas Foster sans the flames as we laughed over wine and played Scrabble with the letters placed in small glasses wedged into pre-cut holes in the old-school desks that had been refurbished and reimagined as dining tables. We discussed the interesting guillotine-fashioned bread cutter and how it meant that this place was not designed for children.

First time around, I neglected to read the back of the menu, which lists all the things Rise No. 2 does to be green. The surrounding merchandise for sale that irked me before suddenly became charming and conscious reminders that recycling and reusing material is forward-thinking and environmentally responsible of this restaurant (and very profitable, I might add — that very cool girolle cheese grater is a whopping $125.)

Rise No. 2 knows soufflés, and other traditional French items on the menu shine as well. The restaurant is bright, cheery and full of charm, at least the second time around.