With a mission to slow folks down in our fast-moving tech-crazy times, Slowpokes offers a comfortable, slightly hip spot to settle in and settle down. As Simon and Garfunkel sang in their laid-back song 'Feeling Groovy', " Slow down, you're moving too fast. You got to make the morning last." And you can make the morning last well into the afternoon and evening at this relaxed cafe. Take a load off your fanny and have a perfectly brewed tea.
Photo by Nate Loyola
Besides using coffee from a combination of local roasters and various others, Slowpokes also showcases Houston businesses such as the gluten-free and vegan Bare Bakery. Michael's Cookie Jar, Kraftsmen Bakery, Angela's Oven and Sinfull Bakery are just some of the vendors whose goods (and carbs) are on offer here.

The Chews menu is small and includes coffee shop favorites like bagels and croissant sandwiches. For lunch and dinner, there are panini, flatbreads and salads. There's even a doughnut grilled cheese to be savored thoughtfully and slothfully. 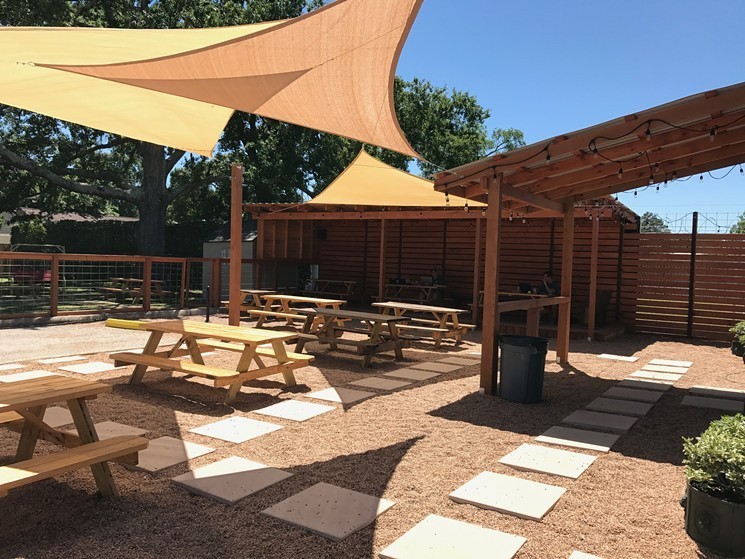 The awesome patio at Slowpokes on W. 34th .
Photo by Gwendolyn Knapp
The Pours menu offers coffee drinks, including cold brews from the tap, and freshly brewed teas. On the beer tap are Houston standards like Saint Arnold's, Karbach and Buffalo Bayou Brewery. Wine can be ordered by the glass or bottle. The Garden Oaks location has a wonderful outdoor seating area and a patio is planned in the future for the new Levy Park spot.

Slowpokes was listed as Houston's Best Coffee Shop in 2017, here in the Houston Press. Houstonians enjoy slowing down the frenetic pace once in a while, so join the sloth, turtle and snail in smelling the roses. Catch up with an old friend. Write the Great American Novel. You don't have to be the hare all the time. They're baaack!
Photo by Lauren McMillan

Truck Yard, 2118 Lamar, will see the return of its guest food trucks this weekend. Due to an issue with city officials regarding permits and fire codes, the bar and beer garden had to discontinue hosting food trucks until the issue was resolved. During the process, Truck Yard continued to serve its tasty cheese steaks from its own kitchen, so patrons weren't left completely famished. However, it's called Truck Yard for a reason and now the wheeled vendors are back on the beat.

First on the scene will be El Guajilo and Muiishi Makirritos on February 22. Twisted Catfish and Coreanos will be dishing out grub February 23 while February 24 will have Wokker and Rich Boy Po Boys. Sunday has a sunny forecast, perfect for trying out the Ferris wheel or just chilling in the beer garden with your pups and pals. 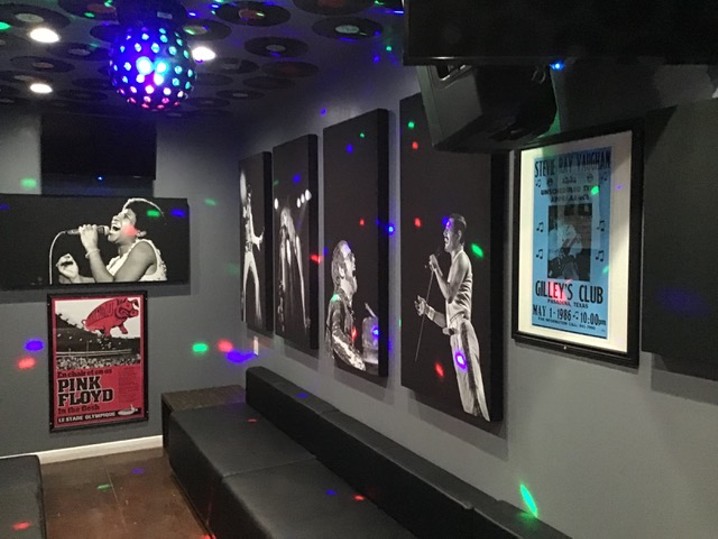 You can be the Queen of Soul or Queen's Freddie Mercury at Truck Yard's Karaoke.
Photo by Jayme Spurgeon
Also new to the Truck Yard will be a Karaoke container. It will be a private enclosed room with three flat-screen televisions, two microphones and a rock-themed interior complete with vinyl records, posters and, wait for it, a disco ball. If you always wanted to be Donna Summer, this is your chance. The container has space for 12-15 persons and there is a $25 rental fee along with a minimum hourly drink tab. It's best to reserve in advance, but if the mood strikes and the Karaoke container is available, the staff will try and accommodate. Cuddle with a buddy on Truck Yard's Ferris wheel.
Photo by Lauren McMillan
While there are games to keep kids happy, bedtime for them is 9 p.m. After that, Truck Yard is strictly 21 and up. Dogs can stay.

With the return of the food trucks and the new Karaoke container, proprietor Jason Boso says, " If you are a regular, now we've got even more to offer. And if you've been looking for a reason to visit, now's the time". We at the Press agree, which is why Truck Yard was named Best Bar Patio in Houston Press's Best of Houston 2019. Enjoy the vibe at La Vibra Tacos.
Photo by Diego Flores
La Vibra Tacos, 506 Yale, began its soft opening January 10. The small restaurant serves Mexico City-style tacos like the bisteco con queso, a housemade corn tortilla with thinly sliced 1855 Angus sirloin and Oaxacan cheese. Other traditional tacos like pastor, shrimp and chicken are available along with treats like the chicharron de queso made with Gouda. Prices range from $2.25 to $4.85 per taco and complimentary chips are served with four dipping salsas.

Beverages like horchata and lime cucumber are available. The taco restaurant is open daily from 11:30 a.m. to 10 p.m.

Tortas Las Llardas, 11861 S. Sam Houston Parkway, opened in the West Bellfort area in early January. This makes the fourth location in the Greater Houston area, with a fifth planned for Katy. The family-owned restaurant serves Mexican sandwiches or tortas with a variety of meats to choose from, including grilled steak, tuna, chicken, pork, ham and chorizo, served on Telera bread. Refried beans, pineapple and various other ingredients are available as well.

The restaurant also serves tacos like pastor and tripitas along with quesadillas and salads. Aguas frescas and milkshakes are available on the beverage menu. 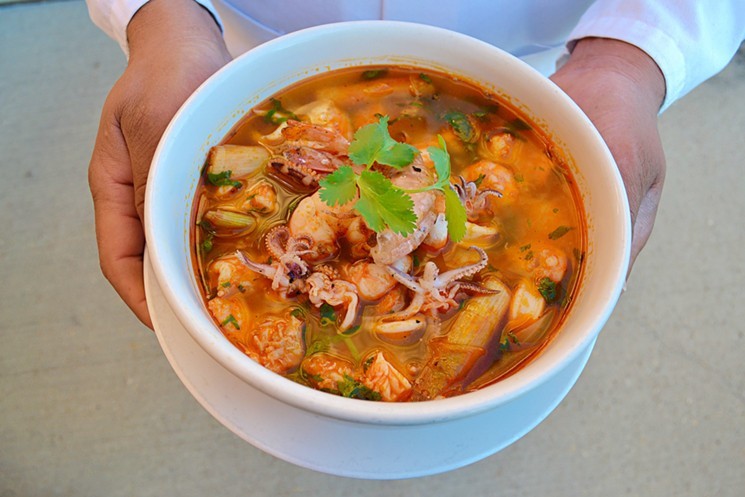 The caldo de marisco at Alicia's will warm you up.
Photo by Marie Elgamal Host your event in style at Frank's Americana Revival.
Photo by REbranding360 Inc.

Owner Michael Shine and son/partner Chris took over the restaurant in 2012, which was previously Frank's Chop House, owned by Houston restaurateur Frank Crapitto. Shine's son Colin is in the kitchen as well, turning out American favorites with an upscale touch. Tomato tartelettes make classy canapes.
Photo by Erika Rubalcava
The Limerick Room seats 36, while the Cork Room holds 24 guests. There is a retractable glass wall that allows for the rooms to combine for 50 persons. The smaller Wine Room seats 15 for a more intimate affair. The private rooms also have audio-visual equipment available.

For more than 20 guests, a pre-set menu is available, while fewer than 20 can be accommodated a la carte with pre-ordering.  Menus can be customized with appetizers and cocktail bites.


Dragon Bar, 9889 Bellaire Boulevard, is in its soft opening stage. The Asian fusion restaurant is located in the Dun Huang Plaza and serves hot noodle pots and a variety of skewered meats and vegetables. For lovers of offal and organ meats, there are choices such as lamb kidney, chicken heart and pork feet. Seafood lovers will appreciate dishes such as oysters served on the half shell and garlic scallop vermicelli. BCK is beefing up its game with new burgers.
Photo by Kirsten Gilliam

BCK, 933 Studewood is changing its nostalgic American fare menu to one that represents more hearty Americana like burgers. According to co-owner John Reed, that's what folks in the Heights are truly craving and he and his partners, along with Executive Chef Peter Petro are revamping the menu to make BCK a destination burger restaurant.

When BCK arrived on the scene last year, there was a playful appeal in the menu items like Pasghetti O's and Mac N' Cheeze-It, hearkening back to childhood nostalgia and eating habits. Reed says, " Our original concept was a beta test for ideas we had. People thought it was cool but they weren't coming back time and again." You can still indulge your inner child at BCK.
Photo by Kirsten Gilliam
Though the concept was creative and well-executed it just wasn't connecting with the Heights area diners. However, most people love burgers and the new menu will have choices for everyone. If you like straight-up traditional fixings, there's the classic BCK burger. If you like burgers on the spicy side, the Tex-Mex is spiced with pickled jalapenos, cilantro and enchilada mayo. And there's the Bacon and Blue for those who love blue cheese. The Mushroom Monster burger will please vegetarians and over-the-top feasters will swoon when they spy the Return of the Mac, a burger topped with bacon, tomato and spicy mac 'n cheese.

For BCK regulars who did connect with the original menu, some of the items will remain, such as the too-cute Pasghetti O's and the Shake N' Bake Pork Chops. There will also be non-burger dishes like Buffalo Cauliflower and Vietnamese Pot Pie. 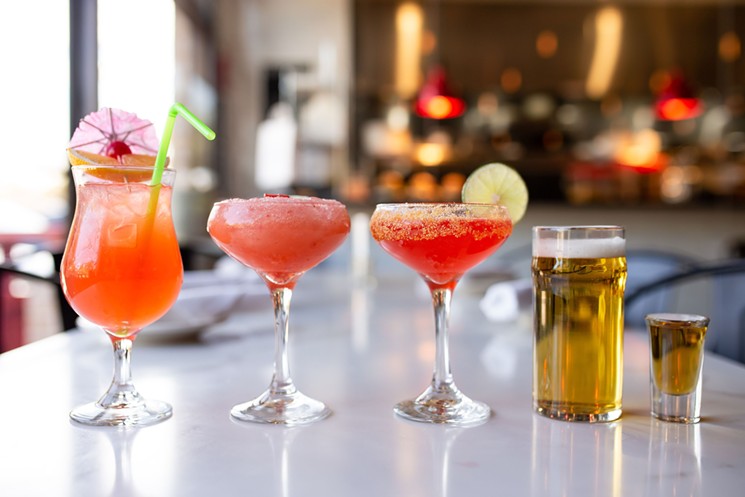 Pretty cocktails and cold beer await at BCK.
Photo by Kirsten Gilliam
Some new cocktails from bar manager Donnol Hem and bar director Matt Sharp will also be featured, including The Sarah Jessica Parker, a Cosmopolitan made with Wheatley vodka and a couple of new cocktails on tap.

And just in time for spring, BCK will add new outdoor seating being called the Maker's Mark patio. That's a great excuse to get out and take advantage of its Burger and Brew Deal. Order a burger and add a draft beer for $3. Now, that's our kind of nostalgia.
KEEP THE HOUSTON PRESS FREE... Since we started the Houston Press, it has been defined as the free, independent voice of Houston, and we'd like to keep it that way. With local media under siege, it's more important than ever for us to rally support behind funding our local journalism. You can help by participating in our "I Support" program, allowing us to keep offering readers access to our incisive coverage of local news, food and culture with no paywalls.
Make a one-time donation today for as little as $1.