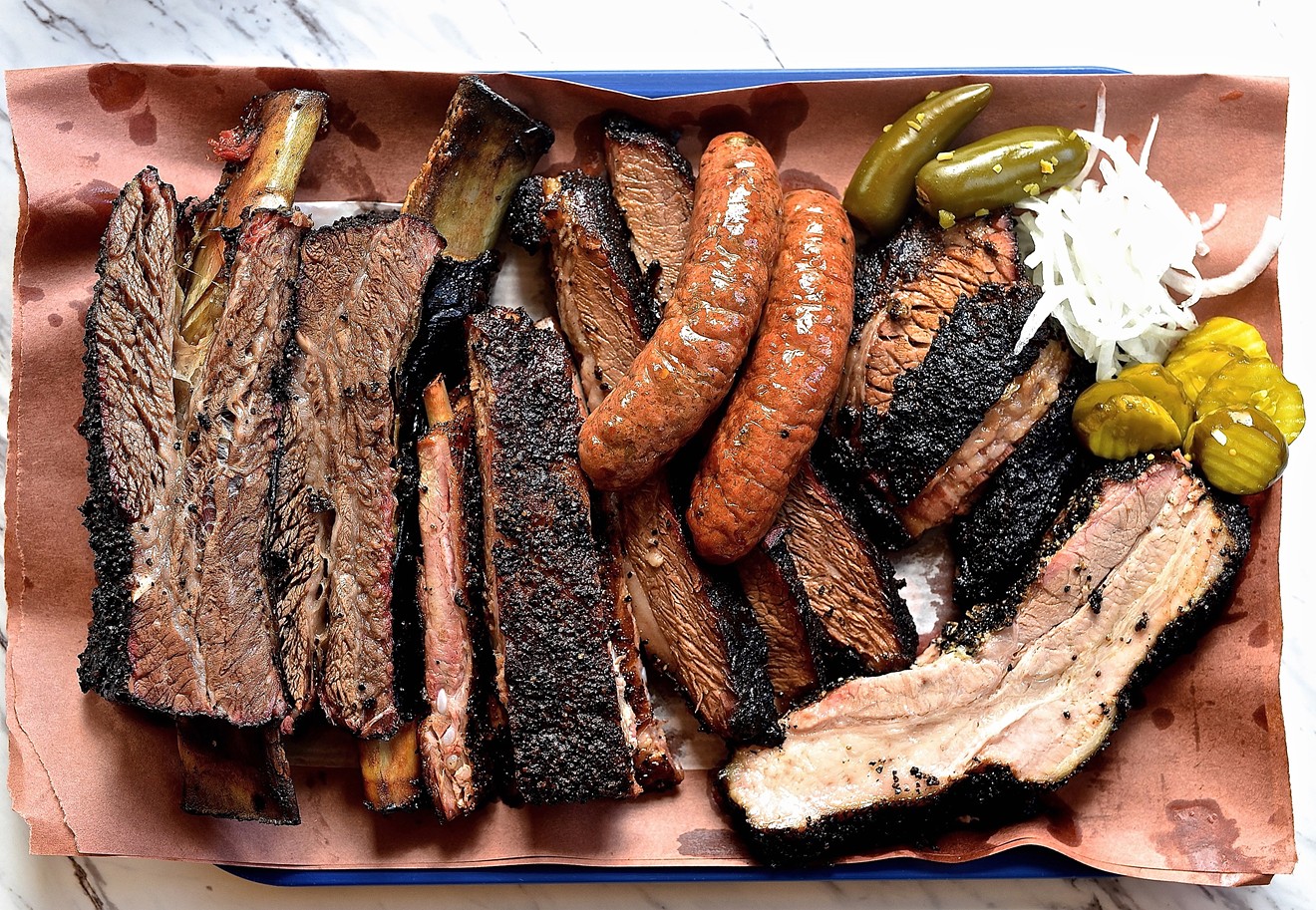 Coming off the heels of his 5th opening in as many years — Tex-Mex-BBQ fusion, Killen's TMX — the chef-owner wasted no time rolling out his 6th grand opening just a few months later. This time in the form of a second Killen's Steakhouse location in The Woodlands. Before that restaurant even opened its doors, however, word hit the streets of a 7th upcoming Killen's property: a much anticipated comfort food kitchen coming to the Heights later this year.

Sufficed to say, Ronnie Killen is a busy man. With all the openings and fanfare surrounding his rapidly growing empire, one wonders if quality holds true at the humble Pearland smokehouse that started it all.

I went back to Killen's Barbecue recently (for the umpteenth time) to kick the old tires and lift the hood on a nationally renown cue joint that might just be suffering from its founder's much divided attentions. 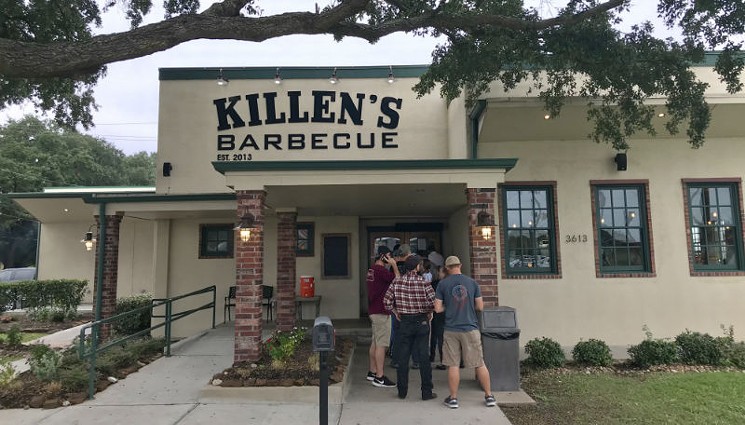 Worth the wait every time.
Photo by Kate McLean
The setting is a renovated public school cafeteria in the heart of old town Pearland. A cafeteria Ronnie Killen once ate lunch in during his formative years. Today, a crisp interior design mixes elements of country smokehouse with fine dining. The atmosphere is small town chic. An old school barbecue counter serves the lunch crowd while a large dining room caters to a full-service dinner crowd in the evenings.

Lunch is served traditionally, on butcher paper covered trays, while dinner is served on more formal flatware. The dichotomy of both experiences, despite what is essentially the same fare, speaks to the growing sophistication of the Texas barbecue scene. Killen's operated on more traditional smokehouse hours for the first few years of its existence — weekend and weekday lunch service. It's notorious 2-3 hour weekend lines made it something of a white whale among barbecue aficionados.Today its 9 p.m. closing time and expanded menu of Tex-Mex and non-barbecue options make the exceptional Texas smokehouse more accessible, while perhaps less authentic. On smokehouse aesthetics Killen's scores a 7.5/10.

While the location is charming, the menu expansive and the gourmet elements undeniable, one thing made Ronnie Killen a household name: his brisket. That marbled, heavily peppered and well-barked prime Texas brisket has graced the pages of national publications and been featured on TV segments from local stations to the Food Network. A recent dinner trip resulted in a fatty, juicy, well flavored and generously plated helping of brisket. Both moist and tender, it satisfied on all levels but one, unfortunately missing that characteristically thick black Killen's bark.

The bark on Killen's brisket is something of a legend in and of itself. Made by slathering the expertly trimmed slabs of beef with classic yellow mustard, then coating with an extra thick layer of salt, cayenne pepper, sugar and imported Tellicherry black pepper on other spices (the exact recipe is admittedly a secret). The mix results in a dark black finish that so flawlessly holds moisture and flavor in during the overnight smoking process. In the case of our dinner order, the bark was thinner and less prominent than during previous visits. A minor flaw likely attributed to the time of day. While we all want barbecue for dinner from time to time, the reality is it's a protein best enjoyed fresh. The more it's allowed to rest, the more its quality suffers. On quality of brisket, Killen's still scores a 9/10 (though we strongly recommend braving the lunch crowds for a proper experience) 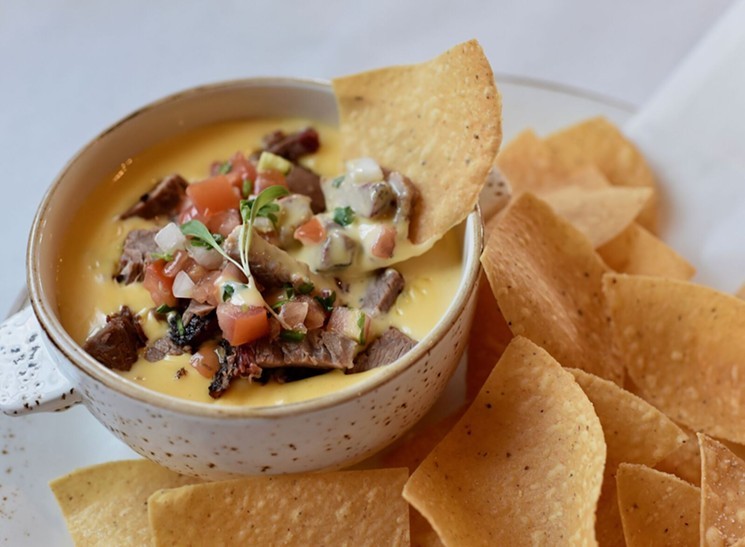 While it's his brisket that made him famous, Killen has spent the past five years experimenting with alternative proteins and barbecue fusions. His most successful combos to date have been those inspired by Houston's prominent ethnic cuisines. From his small menu of Tex-Mex creations like brisket queso and wagyu fajitas, to his beloved Asian-inspired pork belly burnt ends, Killen has successfully leveraged the popularity and brilliance of surrounding ethnic cuisines to further his barbecue and culinary reputation. While some have accused him of appropriation, the quality of such dishes is, frankly, hard to critique. On quality of non-brisket proteins, Killen's scores an 8/10.

For a smokehouse and kitchen with the fine dining pedigree of Killen's, accouterments remain surprisingly traditional. Eight simple and classic country dishes make up the sides menu. All the standards are represented: mac & cheese, potato salad, cole slaw, mashed potatoes, etc. And yet, despite their relatively uninspired nature, few barbecue restaurants in the state have stumbled upon a recipe as beloved, as timeless and as versatile as Killen's creamed corn. Buttery, creamy and decadent with just the right amount of natural sweetness, it's a side we'd keep in our fridge by the gallon. Unfortunately it's only one of eight dishes on an otherwise unremarkable sides list. On quality of sides Killen's scores a 7/10.

Despite his divided attentions, and what must be an insanely busy calendar, Ronnie Killen seems to be keeping a close eye on his namesake barbecue operation. Whether it's the result of well trained cooks or flawless recipes, Killen's Barbecue maintains its legendary quality despite the rare appearance of its executive chef and owner — a rare accolade in itself.
KEEP THE HOUSTON PRESS FREE... Since we started the Houston Press, it has been defined as the free, independent voice of Houston, and we'd like to keep it that way. With local media under siege, it's more important than ever for us to rally support behind funding our local journalism. You can help by participating in our "I Support" program, allowing us to keep offering readers access to our incisive coverage of local news, food and culture with no paywalls.
Make a one-time donation today for as little as $1.