Three-meat plate with brisket, turkey and pulled pork. Sides are mac & cheese and fried okra. Photo by Carlos Brandon
Sugar Land is spoiled for choice when it comes to dining. The massive and affluent suburb turned micro-metropolis has more respectable culinary diversity than most areas outside the loop — thanks in large part to its sizable Indian, East Asian and Latino populations. And yet, good barbecue in Sugar Land is as scarce as good sushi in Needville. It's clear the Texas barbecue Renaissance has not made its way to the land of Imperial Sugar. Whereas Houston is brimming with new-age brisket behemoths, Sugar Land's barbecue chops extend only as far as a few chains; none of which have merited significant media coverage over the years. And yet, Sugar Land's own Brookstreet Bar-B-Que, a city-wide chain with locations in Richmond, Missouri City, Weschase and Montrose, is a suburban born smokehouse with the apparent chops to land a coveted inner-loop locale. It was that quiet growth, that sudden surge of legitimacy that came with it's Montrose expansion in 2016, that drew us to the Highway 6 location this week to find out for ourselves — Is Brookstreet worth the hype?

Brookstreet Bar-B-Que in Sugar Land.
Photo by Carlos Brandon
Because of Sugar Land's aggressively suburban zoning laws, the exterior of Brookstreet Bar-B-Que is the same bland, faded brick facade of the other surrounding businesses; including a nearby McDonald's and Enterprise Rent-a-Car. That said, the owners have managed to spruce up the inside with shiplapped walls covered in an assortment of standard smokehouse and cowboy decor. The kitschy selection of mounted bucks, antique signs and various Texan novelties plays well against the smell of smoke and custom wood tables and chairs. There's even porch seating out front, framed by two large stacks of firewood that may or may not be decorative. On smokehouse aesthetics Brookstreet Sugar Land scores a 6.5/10. For a smokehouse with this much cowboy nostalgia and "home on the range" aesthetic, one would hope to find some damn good brisket. Hell, for a place owned by a guy who credits his time working at Franklin's as critical to his barbecue pedigree, quality brisket should be an absolute given. In the case of Brookstreet, quality is a somewhat subjective term.

Pre-barbecue renaissance, the brisket at Brookstreet may have been considered excellent by Houston standards. It is, after all, somewhat moist and quite tender, with mild salt and pepper seasoning and a nice, smoke-penetrated brown hue. That said, it is entirely too dry and bland by today's elevated standards. It struggles to compete with the prime cuts and over-the-top seasoning mixes of high end smokehouses like Killen's and Truth. Its thin bark barely registers on the palate. And, while tender and flavorful, it ultimately falls short of exceptional. On quality of brisket Brookstreet scores a 6.5/10. 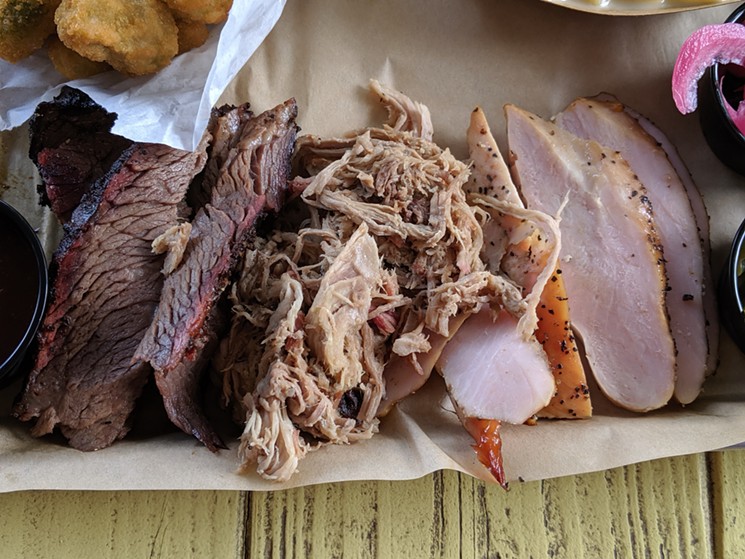 Brisket, Pulled Pork, and Smoked Turkey
Photo by Carlos Brandon
If the brisket falls short of expectations, the pulled pork barely makes a splash. Criminally dry, in a manner only salvaged by dousing it in sauce, the pork lacks both flavor and fat. The result is a sad, dry heap of stringy meat that serves only as a vehicle for BBQ sauce delivery. Smoked turkey was much the improvement, though not without its flaws. The meat was moist and tender but with just a hint of hammy chewiness, unwelcome in any smoked bird. On quality of non-brisket proteins Brookstreet scores a 5.5/10. Sides were, to my relief, a decided improvement on the smoked protein. A luscious and creamy mac & cheese  with over-sized shells manages to nail one of the most under performing sides on any smokehouse menu. Fried okra was perfectly light and crunchy, with fresh tasting okra and little to no grease. Also, while not a side, free soft serve is always a winner in our book — a kid-friendly touch of service, all too sorely missed in some of our city's more self-important neo-smokehouses. On quality of sides Brookstreet scores a 7.5/10.

This suburban smokehouse's saving grace seems to be its value. While the meats underwhelm by top of the line standards, at $17 for a three-meat plate with two sides, its a value you won't find at one of the big name, Texas Monthly recognized joints. Brookstreet may not be ready to feature in this year's Texas Top-50, but it's a decent neighborhood smokehouse that fits most family dine-out budgets and doesn't require a two-hour wait. Sometimes that's all we ask of our barbecue.
KEEP THE HOUSTON PRESS FREE... Since we started the Houston Press, it has been defined as the free, independent voice of Houston, and we'd like to keep it that way. With local media under siege, it's more important than ever for us to rally support behind funding our local journalism. You can help by participating in our "I Support" program, allowing us to keep offering readers access to our incisive coverage of local news, food and culture with no paywalls.
Make a one-time donation today for as little as $1.