Cooper's Old Time BBQ is rightly considered the best smokehouse in New Braunfels. Photo by Carlos Brandon
We're stepping way, way, way outside the loop this week for a special edition of Smoked Out. As far out as New Braunfels, for a floating the river, summer day trip to the Hill Country kind of barbecue review. Cooper's Old Time Pit Bar-B-Que is a Central Texas institution. For 56 years the folks at Cooper's have been smoking meat one way — over mesquite coals — and serving that meat straight from their massive smokers onto your tray. Despite changing barbecue practices, a move away from mesquite smoke and the proven benefits of wrapping and resting, those practices have remained stubbornly unchanged ever since.

The original Llano location, deep in the heart of the Hill Country, opened its doors in 1963. Since then the company has expanded with three more locations, including a massive, Walmart-sized smokehouse in everyone's favorite river town, New Braunfels. Barbecue tray with brisket, sausage and turkey from Cooper's in New Braunfels.
Photo by Carlos Brandon
On approach, the New Braunfels location looks like a theme park interpretation of a Texas smokehouse; like a Medieval Times version of a barbecue restaurant. Its massive size is matched only by the sprawling endlessness of its parking lot. The front door drops you directly into the pit room, where the smell of several enormous pits all smoking at once grabs you by the collar and pulls you in. Meat is selected first, by weight or in family-sized combos, straight from the pit to your tray. The warehouse of a dining area is lined with picnic tables where customers eat cafeteria-style. The place even comes complete with a gift shop. While kitschy as all get out, it has a certain touristy charm to it. On smokehouse aesthetics Cooper's New Braunfels scores a 7/10. 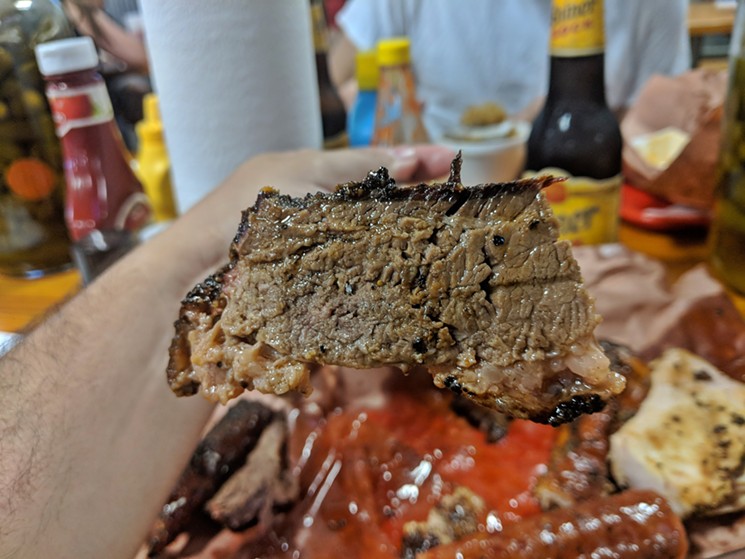 Look at that sweet sweet marbling.
Photo by Carlos Brandon
Last week we chastised Goode Company for their exclusive use of mesquite smoke in their brisket. The week before, lamented Burns Original Barbecue's refusal to wrap or rest theirs before serving. In stubborn refusal to change their traditions, Cooper's repeats these modern-day brisket faux pas. And yet, despite this, manages to serve a brisket as moist and flavorful of some of the finest new guard establishments in Houston. Our brisket had a deep, smoke penetrated brown hue, luscious fat distribution and was pull apart tender. It's bark, while not particularly spicy or salted, was baked on thick, creating burnt ends packed with concentrated peppered goodness. On quality of brisket, Cooper's New Braunfels scores an 8/10. Like so many old school smokehouses, Cooper's doesn't actually specialize in brisket, or beef at all. The house specialty is a thick, gorgeous smoked pork chop that is a juicy and tender as the best steakhouse variety. Other smoked goods include half chickens, sausage, steaks and pork and beef ribs. Turkey meat is delicious, well smoked and tender. Sausage has a true Hill Country authenticity to it — thick casing holds wonderfully salty and heavily seasoned pork. Not too greasy, not at all dry, with heavy smoke flavor. On quality of non-brisket protein Cooper's New Braunfels scores an 8/10. Mouthwatering peach cobbler and Bluebell. YES PLEASE.
Photo by Carlos Brandon
The sides menu is longer than most, a fitting addition to a larger than life BBQ shack. From creamy mac & cheese to savory fat-cooked green beans, to a very well seasoned potato salad that delivers a nice punch of peppery spice. Overall the sides are better than average. Certainly passable, but not to die for. However, if we consider dessert a category worth judging (and we do) Cooper's homemade cobblers topped with Bluebell vanilla ice cream are reason enough to drive three hours out of Houston for. A mouthwatering finale to a top notch meal that'll leave you kicking yourself for not saving room — though every painful bite is more heavenly than the last. On quality of sides (and dessert) Cooper's New Braunfels scores an 8/10. Smokehouses can often be accurately assessed by their outward appearance. The type of smoker, the wafting aroma or lack thereof, the size of the line and the spotless or worn in nature of the place, all indicators of what's to come. But sometimes looks can be deceiving. Sometimes a gaudy, tourist trap warehouse of a restaurant turns out to sell some of the best Central Texas barbecue in town — even if they do so with out of date techniques and have an on-site gift shop. Texas barbecue is funny like that.
KEEP THE HOUSTON PRESS FREE... Since we started the Houston Press, it has been defined as the free, independent voice of Houston, and we'd like to keep it that way. With local media under siege, it's more important than ever for us to rally support behind funding our local journalism. You can help by participating in our "I Support" program, allowing us to keep offering readers access to our incisive coverage of local news, food and culture with no paywalls.
Make a one-time donation today for as little as $1.