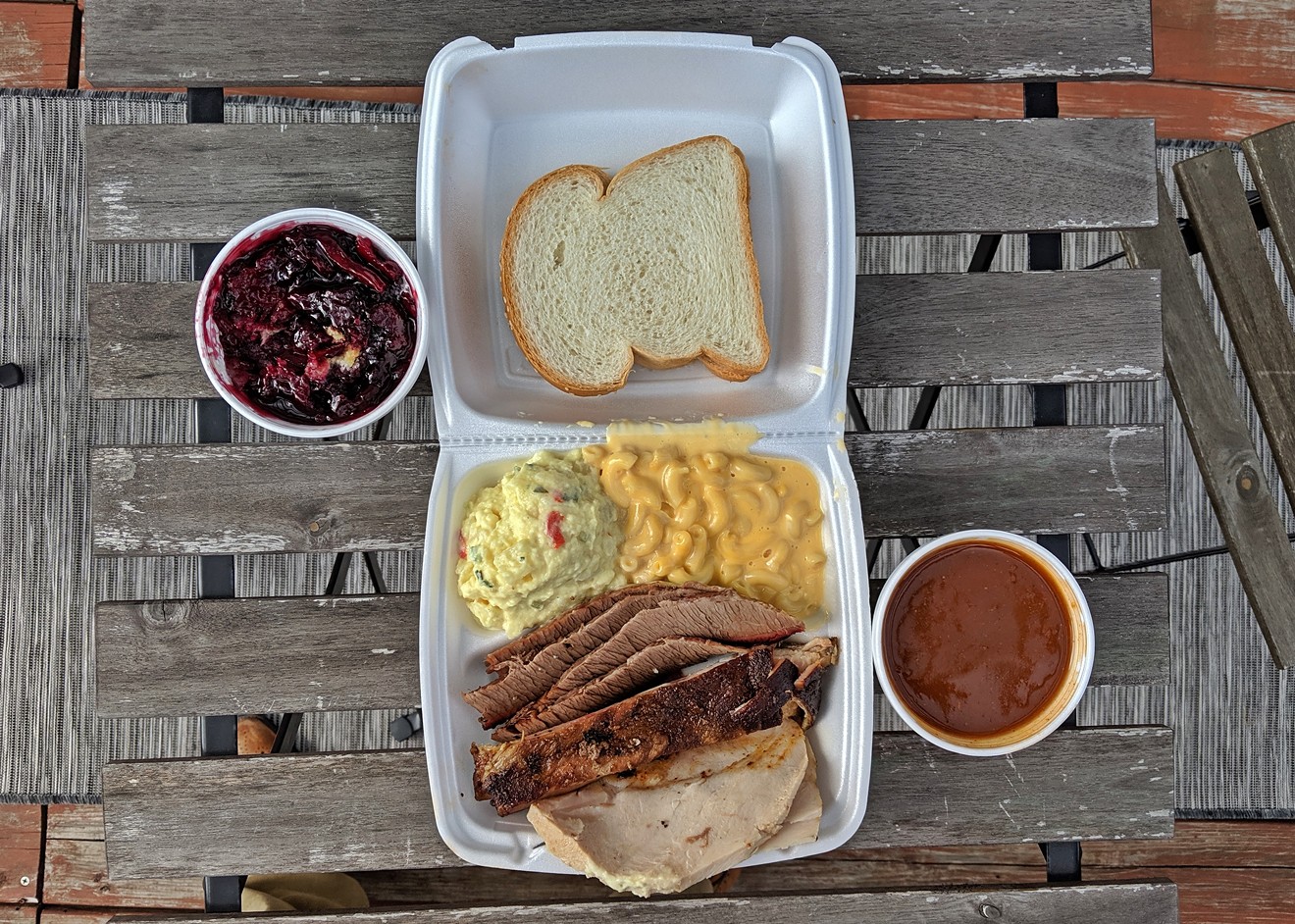 Demeris Bar-B-Q has been a Houston institution since 1964. Photo by Carlos Brandon
The Demeris name has meant something in Houston restaurant circles for well over half a century. Since Frank Demeris opened the G & N Cafe on North San Jacinto in 1952 the family has owned and operated a handful of Houston restaurants and cafes, most of which have since shuttered or been rolled into the family catering  and barbecue business.

The first Demeris Bar-B-Q opened in 1964 in the same Shepherd location it's still in today. Over the years there were as many as four locations, though today only the original Shepherd and popular West Loop locations remain. Famous for their hickory smoked meats, barbecue sandwiches and the family's proud Greek heritage, the smokehouse has stood the test of time in a city and a neighborhood known to kick outdated mom and pops to the curb in exchange for new blood.

The original Demeris location (upon which this review is based) is a mundane and uninspiring building that teems with local history. The combination stone, glass and wood exterior is as '60s as inner-loop Houston gets. With huge red letters on the roof that spell "Demeris Bar-B-Q" in a font not reproduced since Fords still had carburetors. 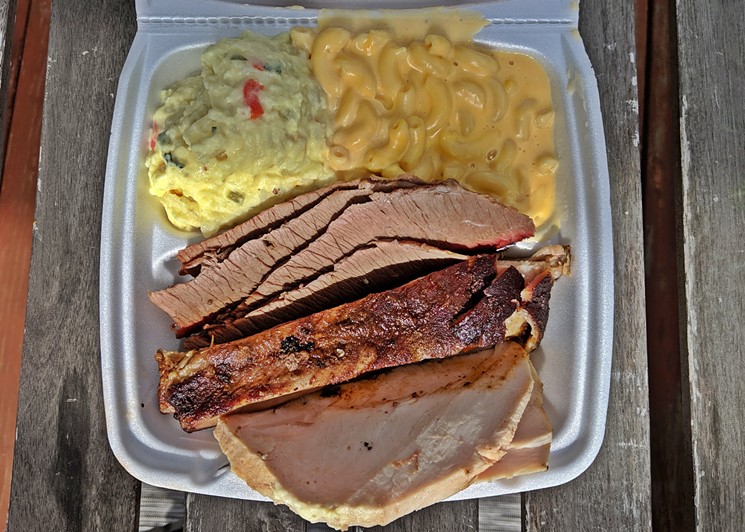 Three-meat plate from Demeris Bar-B-Q.
Photo by Carlos Brandon
Inside, modern upgrades have shaken some of the dust off the old bones, though the dining room still feels like an old country diner. It's not much of a traditional smokehouse, per se; no patio, no stacks of wood, no ship-lap or rustry Coca-Cola signs on the wall. Instead, the old family restaurant maintains the once in vogue custom of dressing up urban barbecue joints to attract the middle-class dining out crowd — a tradition that today has been flipped on its head, with proprietors spending thousands to make new buildings feel like rusty old shacks. On smokehouse aesthetics (for staying true to their origins) Demeris scores a 7/10.

We've come into something of an unintentional theme with this weekly column. One in which older Houston smokehouses are judged rather harshly against the more contemporary brisket trends popping up around the city. As the craft-barbecue practices of Aaron Franklin and a new class of Central Texas-trained pitmasters become the new standard for brisket across the state, old school Houston que' joints are feeling the burn of trendy new competition.

Demeris Bar-B-Que does not serve the impossibly moist prime brisket of, say, a Truth or a Killen's. Their hickory-smoked beef does not drip with fat and fall apart at the lightest touch. Its most prominent feature, if we're being honest, is its consistency. And, if we're being even more honest, its price. At under $20 for a three-meat dinner with two sides and a drink, this is an inner-city smokehouse offering a massive dinner plate at what are now considered reasonable lunch prices. Yet, with such world-class brisket at our fingertips and with quality as unparalleled as Truth, Pit Room, Feges and Rogels all inside or just beyond the Loop, it becomes impossible not to draw comparisons, however unfavorable they may be to institutional family businesses. On quality of brisket, Demeris scores a 5.5/10.

Blackberry Cobbler from Demeris Bar-B-Q
Photo by Carlos Brandon
The menu at Demeris Bar-B-Q is massive by smokehouse standards. Non-brisket proteins include smoked turkey and chicken breast, pork spare ribs, baby back ribs, sausage, pulled pork and half-chickens. There are more than a dozen sandwich and burger options, plus loaded potatoes, salads and traditional restaurant entrees. Some of the most popular menu items are the massive smokehouse burgers like the Hoffy Burger — a full pound of Angus beef and cheddar topped with a gargantuan onion ring. Our three-meat plate included a few very tender, though sadly under-seasoned, slices of smoked turkey, as well as one massive spare rib. The rib was not particularly tender or well-seasoned and, lacking a proper glaze, relied heavily on the house sauce to give it a face lift. On quality of non-brisket proteins Demaris scores a 6/10.

The sides menu is characteristically long as well, with a whopping 15 side orders to choose from. Some notable options include jalapeno corn, seasoned green beans, Mexican rice and queso and chips. Our order of mac 'n cheese was satisfying in a way that kraft shells are — by which I mean they tasted like they came from a box. Potato salad and green beans both failed to raise an eyebrow, though neither was necessarily unpleasant. The meal's finale and genuine highlight was a housemade blackberry cobbler that blew the roof off the rest of the experience. Warm, tart, sweet and thick as mud, it's a dessert worth every penny spent on the barbecue. On quality of sides Demaris scores a 6/10.

The story here is one we've told before. An old school family name with decades of clout and institutional Houston status that is struggling against the ascending quality of Houston barbecue. Dry brisket, uninspiring sides and a menu that does too much, Demeris Bar-B-Q, while affordable, historic and essential to Houston's barbecue identity, is a smokehouse that perhaps needs to shake things up.
KEEP THE HOUSTON PRESS FREE... Since we started the Houston Press, it has been defined as the free, independent voice of Houston, and we'd like to keep it that way. With local media under siege, it's more important than ever for us to rally support behind funding our local journalism. You can help by participating in our "I Support" program, allowing us to keep offering readers access to our incisive coverage of local news, food and culture with no paywalls.
Make a one-time donation today for as little as $1.