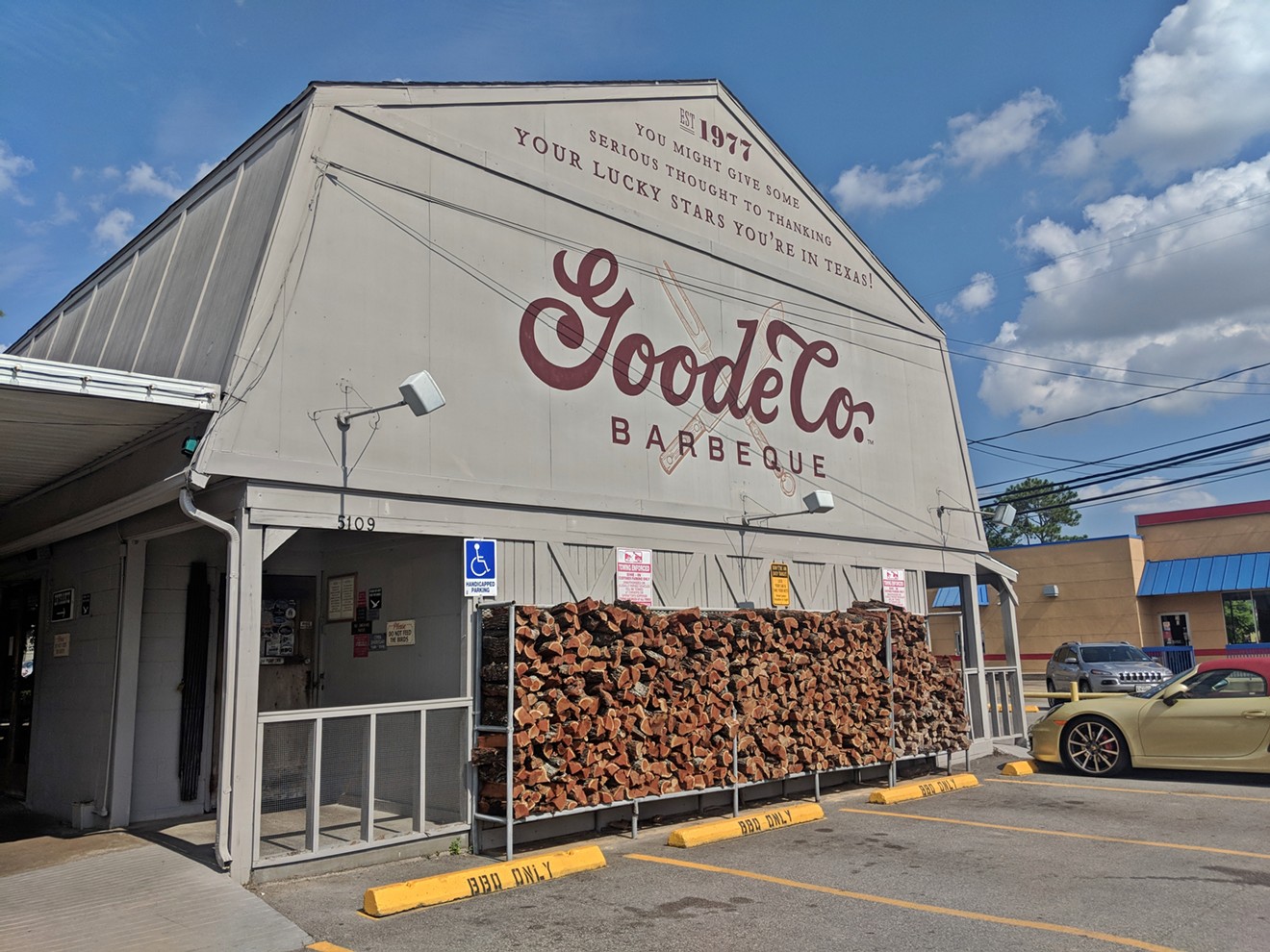 New on the menu, the 1977, compelled us to revisit the original Goode Company Barbecue on Kirby. Photo by Carlos Brandon
The decision to include Goode Company Barbecue in this column was somewhat labored over. While the 42-year old smokehouse — and Goode family name — are something of a Houston institution, the decline in their barbecue quality has been well, and harshly, noted by both critics and online reviewers alike.

Perhaps Goode's barbecue was never up to snuff. Perhaps the company's ascension into a local empire was less a product of its quality and more a reflection of the city's dismal standards pre-barbecue renaissance. And yet, despite the complaints, for so many Houstonians Goode Company was our first exposure to smoked Texas brisket, our first time stepping into a legit smokehouse. For better or worse, the Goode Company legacy is integral to Houston's barbecue history.

What finally moved the needle and got me into the original Kirby location this week was a press release about a new menu item — the 1977. A kitchen-sink style barbecue sandwich celebrating both the company's four-plus decades in Houston and the nostalgia of a brisket sandwich on a Texas summer day. The sandwich, which features sliced brisket, honeyed ham, mac and cheese, cheddar cheese, and caramelized onions, looked and sounded good enough to merit a full Smoked Out review of Goode's barbecue credentials 42 years later. 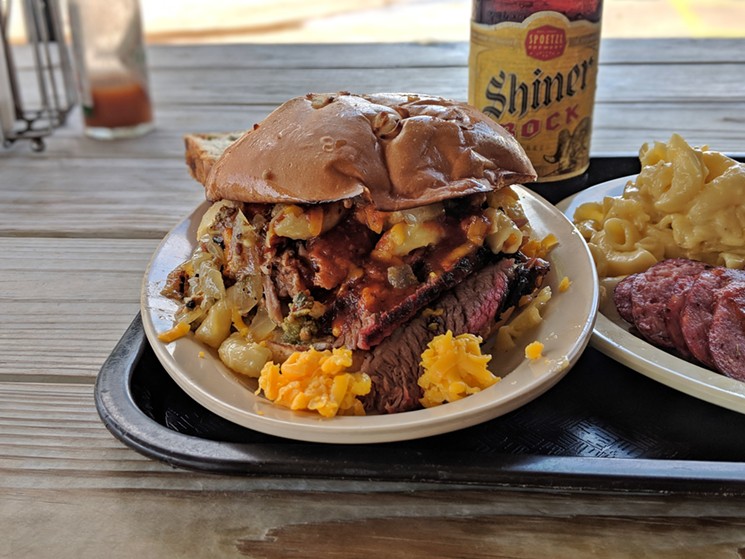 The 1977 with brisket, honeyed ham, mac and cheese, and cheddar cheese.
Photo by Carlos Brandon
On a Monday afternoon at 4 p.m., the dining room was empty but for a single customer. On the patio sat a second. It was well past lunch and a little too early for dinner. The quiet emptiness of the place offered time to soak it all in: the overtly Texan decor, the barn style construction, the rusty antiques and stuffed cattle on the walls, the swinging doors and ice boxes full of beer. It's the type of place that'll make a lifelong Houstonian's eyeballs roll right out of the sockets. And the first place that person goes after a year away from home. Like Houston, it's equal parts obnoxious and charming. On smokehouse aesthetics Goode Company (the original) scores a 7.5/10.

More than anything else, bad brisket is what marked the decline of Goode's barbecue reputation over the years. Generally considered too dry, too thin, too lean. It's a brisket that, frankly, pales in comparison to the "new" names on the block — names like Truth, Blood Bros., Roegels, Feges, Pinkerton's, etc.  And yet, the slices thrown on our 1977 sandwich came from a particularly moist slab. One that looked respectfully trimmed with decent bark and color. On their own, these slices were not exactly exceptional. There was moisture, flavor, smoke and even a mild hint of spice. There was also dryness, and the unfortunate grilled flavor of mesquite (though we'll chock that up to personal preference).

Two-meat platter and 1977 sandwich from Goode Company Barbecue.
Photo by Carlos Brandon
On the more forgiving sandwich, however, those same slices shined, playing beautifully with the tender honeyed ham and sweet butter-brushed buns. On quality of brisket Goode Company scores a surprising 7/10.

Some Houston smokehouses, like last week's subject, Burns Original BBQ, just don't do brisket. Or rather, they do it so poorly it's not worth mentioning. That's usually because their ribs, chicken, links, turkey and/or boudin is so damn good you don't ask for sliced beef. Goode doesn't exactly fall into that category. A stack of mesquite logs along the front facade, a massive smoker out back and the smell of beef and smoke wafting over the property are all signs that you're at a traditional Texas smokehouse. That said, Goode's smoked honey ham, pork ribs and smoked turkeys have been known to take some heat off the less than ideal brisket. This week, a two-meat platter with pork ribs and Czech sausage both thrilled and disappointed.

We've got mixed feelings about the pork ribs and Czech sausage combo.
Photo by Carlos Brandon
Thrilling were the tender, juicy pork ribs with a sweet glaze courtesy of Goode's tomato forward house sauce. The meat was pull apart tender and, while a little fatty, fantastically flavored. Disappointing was the Czech sausage, a rubbery link with notes of heavy smoke and not much else. Rather than complement it, the bland pork and beef grind only served to highlight how incredibly tomatoey the house sauce is. On the other hand, the honeyed ham on the 1977 sandwich was a thing of beauty. As tender as smoked turkey with the sweet and salty palate only honey glazed ham can deliver. On quality of non-brisket proteins Goode Company scores a 7.5/10.

A chilled potato salad was refreshing on the boiling hot patio. Always a handy palate cleanser between bites of barbecue, but lacked much in the way of tang or flavor. Mac and cheese was as thick as cement, with an overcooked consistency like it had sat in the warmer for too long — a lapse we can forgive due to the time of day. Previous trips to Goode have been highlighted by the Austin baked beans and collard greens: Two sides that lift up an otherwise mediocre line up. On quality of sides Goode Company scores a 6/10.

So, is Goode Company ready to retake (or perhaps finally earn) its place among the top tier smokehouses in Houston? Probably not. Improvements are still needed. Replacing that stack of mesquite with some oak logs would be a good start. However, the brisket on our 1977, and the extremely moist looking slab from which it came, are good signs for this long beleaguered Houston smokehouse. Today the Goode Company name might be better associated with incredible Tex-Mex and seafood, but there's always time to retake that BBQ glory. With the right tweaks, it's a feat not entirely out of reach.
KEEP THE HOUSTON PRESS FREE... Since we started the Houston Press, it has been defined as the free, independent voice of Houston, and we'd like to keep it that way. With local media under siege, it's more important than ever for us to rally support behind funding our local journalism. You can help by participating in our "I Support" program, allowing us to keep offering readers access to our incisive coverage of local news, food and culture with no paywalls.
Make a one-time donation today for as little as $1.