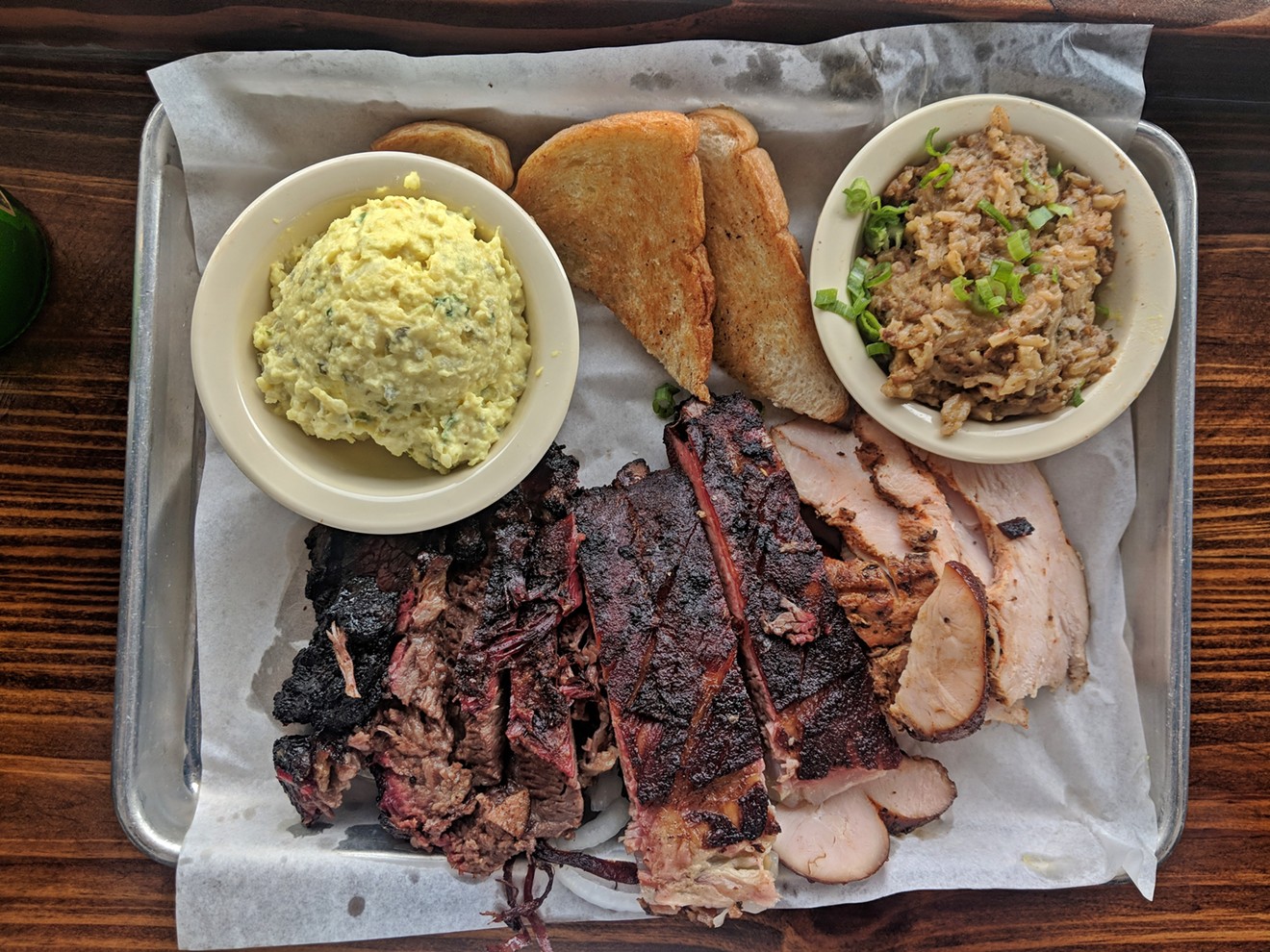 3-Meat Platter from Ray's BBQ Shack on OST Photo by Carlos Brandon
When stepping into a barbecue joint for the first time, it's always comforting to see a packed house. While success in the restaurant game isn't always an indicator of quality, barbecue is by and large a word of mouth tradition. So a line of customers is as good as any 5-star Yelp rating.

Lunch is the standard rush hour for smokehouses. Most of the best don't even stay open past 3 p.m., and if they do it's to avoid throwing out what's left of their brisket. So when you walk into Ray's BBQ Shack at 4:30 on a Monday to a bustling dining room and a line out the door, a special kind of anticipation washes over you.The kind that says, "This is gonna be good".

On Old Spanish Trail at the far south end of Third Ward, Ray's BBQ has been a neighborhood staple since long before its doors officially opened in 2011. Rayford Busch, co-owner and pitmaster of Ray's, started selling barbecue out of a truck back in 1985. For nearly three decades he sold his legendary smoked fare all over the greater Third Ward and Riverside neighborhoods while working for the Harris County Sheriff's Department.

While not the media darling many of his peers are, over the decades Ray has build a solid reputation as one of the city's best (and most underrated) pitmasters. His loyal customers and those in the know recognize his old school Houston smokehouse as one of the pillars of Houston's unique barbecue heritage — one that mixes the beef trade of central Texas with the creole influences of Louisiana and the Gulf Coast.

Brisket, Pork Ribs and Turkey platter with Potato Salad and Dirty Rice
Photo by Carlos Brandon
While its lifeless strip mall facade is an unfortunate symptom of the city's ongoing war against appealing architecture, the interior decor more than makes up for it. Inside, shiplap-covered walls, picnic-style metal stools and chairs, custom wood tables and the heavenly aroma of rendering fat and hickory smoke all greet the senses, at once erasing any thought of strip malls or busy rush hour thoroughfares. On smokehouse aesthetics Ray's BBQ Shack scores an 8/10 (mostly for working with what they've got).

You don't expect to be floored by the brisket at a barbecue joint known for its Houston roots. With respect to the great pitmasters working hard to change the negative connotations about our city's brisket, the truth is East-Tex barbecue has historically been about pork ribs and smoked bird. But 34 years in the game is a long time. Long enough for Ray Busch to master a smoked brisket recipe that could draw large crowds at any BBQ pop-up from Beaumont to Marfa. A beautifully blackened bark forms a thick and juicy crust near the edges, while fork tender center meat delivers a perfectly al dente bite. It's overall quality is made evident by the still tender burnt end pieces good enough to make a meal out of.

The brisket's only two downsides are a slight over salting that just manages to overstay its welcome, and an abundance of unmarbled fat left uneaten on the platter. On quality of brisket, Ray's BBQ Shack scores a 7.5/10.

Pork ribs smothers in the house BBQ sauce at Ray's BBQ Shack.
Photo by Carlos Brandon
While the brisket is good, excellent, by all means masterful, we'd be lying if we said it's the best thing on the menu. It's not even close. The best thing, the thing that should put Ray's on Texas Monthly's Top 50 BBQ joints list, are Ray's pork ribs. Hickory smoked, fall-off-the-bone tender meat comes apart at the slightest nudge of your fork or tug of your finger. The flavor is in your face good, but somehow clean and well balanced. While they want for nothing, they are perfectly complemented by the house's sweet, bright red and gravy-thick barbecue sauce — a flavor combo too good to miss on account of some misguided barbecue purism.

Joining the ribs on the menu is a smoked turkey as moist as any this writer has tried in Houston, as well as half-bird smoked chicken, beef ribs (on weekends), half and full racks of baby back ribs, and creole options like po'boys, fried catfish and shrimp, and burgers. On quality of non-brisket proteins, Ray's BBQ Shack scores a 9.5/10.

Sides shine bright at this southern kitchen disguised as a barbecue shack. From a tangy potato salad that proves once and for all that mustard is the only acceptable base for said accouterment, to a heat-packing dirty rice with pork sausage and green onions, sides aren't the main attraction at Ray's but they make one hell of an opening act. On quality of sides Ray's BBQ Shack scores a 7.5/10.

For any number of reasons, primarily its south side location off OST, Ray's BBQ has historically been overlooked as a local barbecue institution. While the past year has certainly brought more positive attention following the opening of the new location, Ray Busch remains one of the city's most underrated pitmasters. A representative of the Bayou City's unique and multi-layered barbecue heritage, he's played a prominent role in defining Houston's barbecue scene since the mid-'80s. Today, Ray's BBQ Shack is a must visit smokehouse for any serious barbecue fans passing through H-Town.
KEEP THE HOUSTON PRESS FREE... Since we started the Houston Press, it has been defined as the free, independent voice of Houston, and we'd like to keep it that way. With local media under siege, it's more important than ever for us to rally support behind funding our local journalism. You can help by participating in our "I Support" program, allowing us to keep offering readers access to our incisive coverage of local news, food and culture with no paywalls.
Make a one-time donation today for as little as $1.