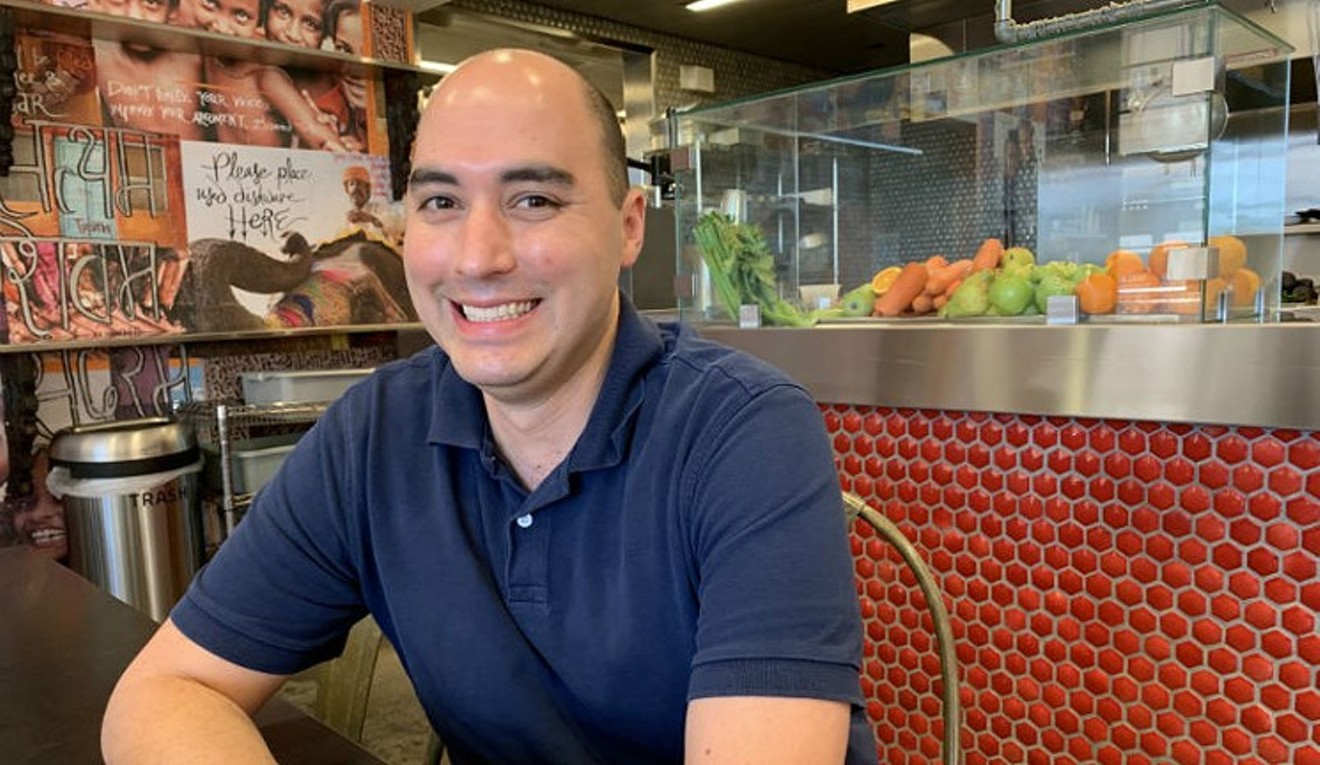 This week, Houston Press is showcasing local food professionals who are also musicians. We asked how their culinary and music lives intersect and how those experiences ultimately make your dining experience a better one. Each shared what’s new at their establishments and reminded folks that Houston eateries are open and eager for business. And, they all spoke at length about the music they perform and love. Today's installment features Master Sommelier and budding rap impresario, Steven McDonald.

As Steven McDonald sees it, his music background helped propel him to one of the food world’s most exclusive and coveted distinctions. The wine director for Pappas Bros. Steakhouse Houston Galleria is a Master Sommelier, one of only 269 on the planet, he noted. The distinction is so difficult to attain some sommeliers chase it their entire careers. When McDonald earned the designation in 2018, he attributed his success, in part, to his degree in music education from University of Houston.

“You train your palate like you train your ear,” he said. "My example is you’re listening to a symphony orchestra. You maybe love orchestras, you love classical music, whatever, and then somebody might play a trumpet on its own and say, ‘Hey, this is the trumpet sound and every time you hear that you will know that it’s the trumpet playing.'

“It’s essentially the same that, when you start tasting wine, if somebody showed you what oak tasted like, for example, you knew that when you tasted that it’s very likely that that wine was aged in oak. You can make rational determinations, deductive determinations on what maybe that could be. And in blind tasting, that was very, very helpful.”

McDonald has been with Pappas Bros. since September 2013 and oversees a wine list of 5,000 selections and a four-person sommelier team. The restaurant has won the Wine Spectator Grand Award every year since 2010. There are only about 80 restaurants in the world that have this distinction for their wine list.

And, McDonald noted, the restaurant is currently open and pouring wine for guests at the state-determined ratios. Restaurants are presently allowed 75 percent dine-in capacity, but McDonald said the Galleria-area steakhouse is being extra cautions about customer spacing, so it rarely meets capacity. They’re also offering curbside service.

“We’re (open) seven days a week now, so that’s new for us because we used to not be open Sundays,” McDonald said of some recent changes. “A fun other tradition that’s sprouted up, on a normal Sunday there’s prime rib. We haven’t ever done prime rib in the time I’ve worked there which is nearly ten years. So, that is a fun little Sunday thing.”

“I grew up as a band director’s kid, Texas born and raised. He was a 5A high school band director his entire career and I grew up playing saxophone, amongst other things,” he said. “I got really good at it, decided to go to the University of Houston because it was a big city, a great music school, the Moores School of Music, and it wasn’t too far from home, but it was far enough.”

McDonald seemed destined for a life in music. During college, he caught on with the touring musical Blast!,  which he described as “basically like a live-action Fantasia.” He traveled the states and London for a couple of years with the show, then finished his degree and took a job as band director at Spring High School. He started writing his own show and the theater bug bit hard enough to prompt a move to New York City in 2008.

“When I got there, I knew I didn’t want to teach, so I got into hospitality. That’s where I realized that I had a love affair with wine and I even discovered that this thing called sommelier was an actual profession,” McDonald shared. “You got to wear fancy suits, work in fancy restaurants, travel the world, pour, taste, serve wine, all those things, and I was like, yeah, I definitely want to do that.”

So, he began the certification process in New York and returned to Houston in 2010 to raise his family. He knew Pappas Bros. was “the wine destination in the southern United States,” so he hired on as a floor sommelier and was soon put in charge of the program. His hard work and expertise were quickly noticed. He won the Periwinkle Iron Sommelier competition in 2014 and was Service Person of the Year for Houston My Table in 2015. In addition to teaching for the Court of Master Sommeliers, McDonald has taught various wine groups around Texas and New York and is a regular guest speaker at Oklahoma State University’s Wine Forum. Locally, he helped establish the Houston Sommelier Association in 2012.

But his major business achievement was the Master Sommelier certification. He turned to the familiarity of music to ease the strain of preparing for the rigorous examination. He didn’t form a jazz band or write a musical, though; instead, he created a hip-hop song that went viral.

“So much of the exam is kind of this mental game, so to put myself in this mental state me and my buddy decided it would be funny to write a song about this little known grape, this little known white grape in Burgundy called Aligoté, and to make it like comedy hip-hop, a la Lonely Island or Lil Dicky,” he said. “He has a studio in his house so it sounded pretty good, funnier than we thought and it went, in this industry, a little viral."

By "a little viral," he means newspapers in France were writing about the song following its release. McDonald's rap name is "il Primo." Frank Bullington, who plays drums and co-creates viral rap songs when he’s not doing his “real life” work as a wine rep, is dubbed "Toro."  They decided to see if lightning would strike twice and featured Nebbiolo, “a better grape,” McDonald said, for their follow-up.

“We shot a little video in town in February and then the world came apart. We released the video like April 2 and it went almost as viral.”

“Our little group is called Space City Somms, that’s our IG handle, YouTube channel, all that kind of stuff. On 'Nebbiolo' we also featured another sommelier named Lindsay Thomas who was working with me at Pappas and now she works at River Oaks Country Club as their wine director.”

McDonald admits he’s relatively new to hip-hop. He's only been following the genre in earnest for a few years now. His playlist still features Debussy, Beethoven and Camille Saint-Saens, but now it's also heavy with tracks by Black Thought, Eminem, Kendrick Lamar and “a young man, he’s actually from Alief from Houston, his name is Tobe Nwigwe – (he's) unbelievable.”

McDonald said the Somms’ next wine rhymes are being written and will move from grape types to “day in the life of a sommelier stuff.” He said every day on the job is like being the headlining artist of a very exclusive show.

“In terms of becoming a better (wine) professional it was very similar to learning an instrument or training your ear. You realize that’s baked in your DNA if you’ve been doing it your whole life, so you’re not afraid of the new thing or learning something really specific or being outside of your comfort zone or being onstage, so to speak, because that’s essentially what you are at the table.”
KEEP THE HOUSTON PRESS FREE... Since we started the Houston Press, it has been defined as the free, independent voice of Houston, and we'd like to keep it that way. With local media under siege, it's more important than ever for us to rally support behind funding our local journalism. You can help by participating in our "I Support" program, allowing us to keep offering readers access to our incisive coverage of local news, food and culture with no paywalls.
Make a one-time donation today for as little as $1.