Where to Get Some Real Dining Deals During the Astros Season

Who wants a plain dog when you can have all this? Photo courtesy of The Creek Group
Can't make it to an Astros game? No need to settle for a measly sofa and microwave popcorn. Get up off the couch and head to the hotspots below, all offering season-long specials fit for a World Series Champ. Here are eight restaurants to catch the ‘Stros while enjoying a deal on eats and drinks.

Take a break during the seventh inning stretch with a game of ping-pong or cornhole on the patio, and take in the view of a new Astros-themed mural by Houston artist Alex Roman, also known as "Donkeeboy."

Inspired by children's book, The Little Engine That Could, the work-in-progress, tentatively scheduled to be completed on April 11, features second-baseman Jose Altuve and the Minute Maid train, complete with team mascot Orbit as the conductor and a World Series trophy in tow. 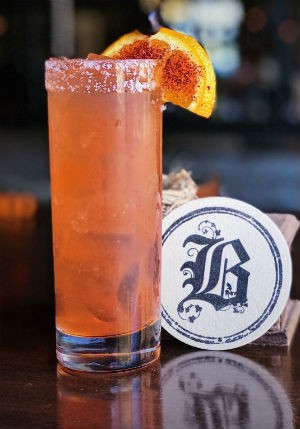 This can be yours all year long.
Photo courtesy Bosscat Kitchen + Libations

Bosscat Kitchen + Libations, 4310 Westheimer
Created during the 2017 Astros' World Series run, the Orbit Juice cocktail at Bosscat Kitchen + Libations near River Oaks was such a big hit, it earned a permanent spot on the drink roster. Now, the house take on a Paloma, mixed with tequila, citrus, bitters and grapefruit juice, can be yours all year long ($14; $8 during Astros games).

Onion Creek, 3106 White Oak
The Creek Group’s mini restaurant empire, including Onion Creek, Canyon Creek, Cactus Cove, Cedar Creek Bar and Grill, and Piggy’s Kitchen, goes to bat with a different Nathan’s Famous hot dog and drink special at each locale, available during every Astros games, now through the end of the season.

Dig into the Hawaiian Hot Dog ($8) topped with pineapple relish and teriyaki mayonnaise at Onion Creek. Wash it down with an 8th Wonder Dome Faux’m ($3) or Crush City cocktail ($8), a frosty mimosa with a floater of orange liqueur, whipped cream flavored vodka or pomegranate liqueur.

Canyon Creek, 6603 Westcott
The deal at Canyon Creek includes the Nacho Dogg ($10) dressed with house-made white queso, chili and spicy jalapenos. Pair it with the H-Town Sunrise ($7) stirred with tequila, orange liqueur and orange juice, or a frozen Minute Maid Mimosa ($7) with a blackberry moonshine floater.

The specialty drink here is the Orbit Juice ($6), a combination of whipped vodka, orange soda and ginger ale. You can also get an 8th Wonder Dome Faux’m for $3.

Piggy’s Kitchen, 3412 West Lamar
Piggy’s Kitchen pays tribute to George Springer with the Springer Dinger hot dog ($8). It’s served with mustard greens and stone ground mustard on a challah bun. But it’s the pork belly and house-made green tomato chow-chow that really knocks this it out of the park.

Drink up thanks to $4 cans of 8th Wonder Hopston.


Laurenzo’s Restaurant, 4412 Washington
Toast to the Astros, whether or not they’re on the field, with the Astros Space City Rita at Laurenzo’s. The bar at the low-key Washington Corridor steakhouse serves up the thirst-quencher, a house margarita topped off with Patron Silver ($12; $10 during happy hour, daily from 3 to 7 p.m.).