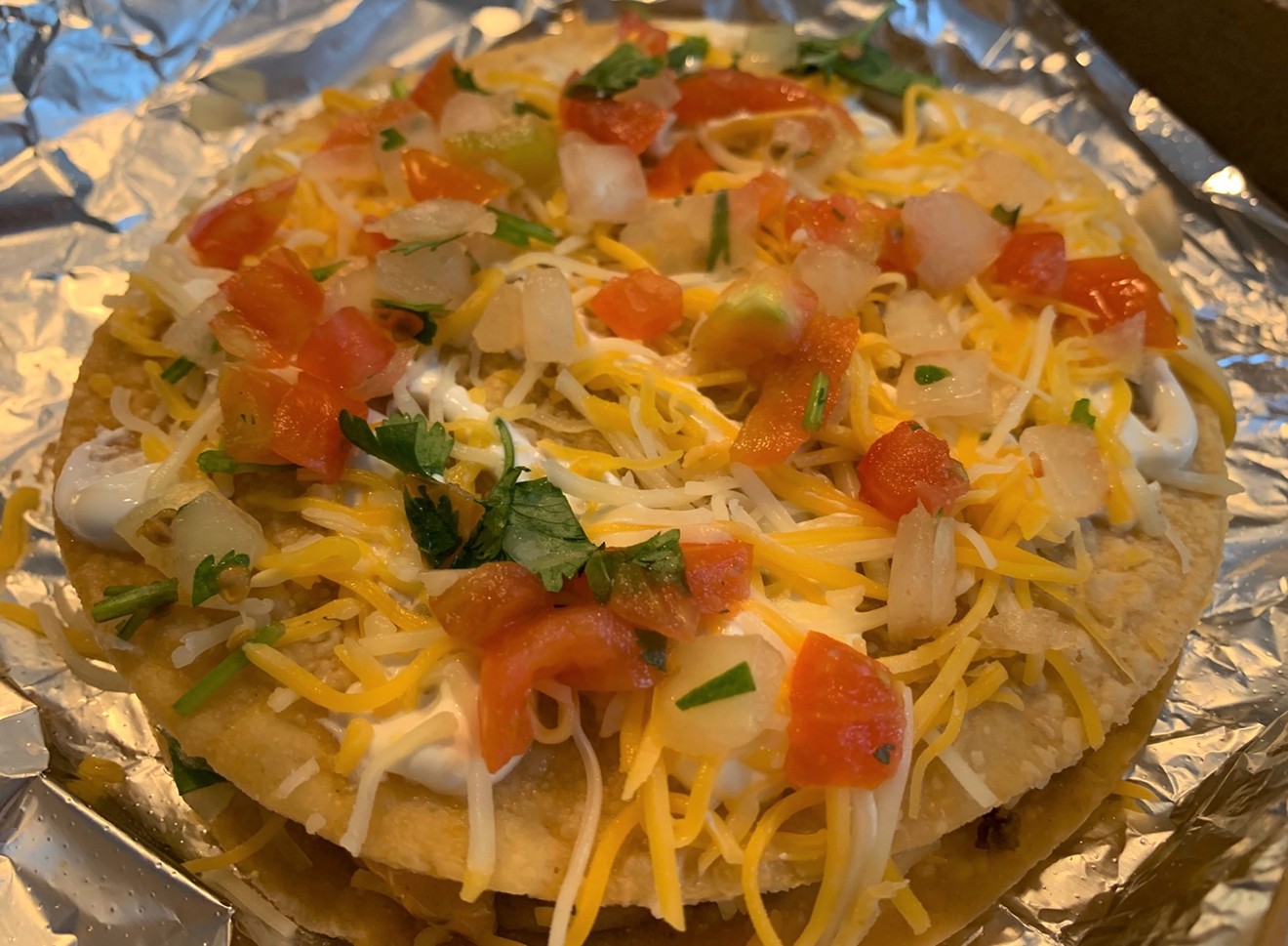 The Double Crunch Pizza delivers on the toppings. Photo by Lorretta Ruggiero

During the height of the COVID pandemic, many of us dealt with supply chain issues and not always getting what we wanted. Restaurants and food businesses had to adapt and customers were understanding, for the most part.  However, when Taco Bell announced in September 2020 that it was removing the Mexican Pizza from its menu, there were voices in unison saying, "What the hell, Taco Bell?"

The chain from Yum! Brands has long been a source of cheap, late night fuel or a fast noonday lunch. For many, Taco Bell offered after-school sustenance that teens (probably working at other fast food restaurants) could afford. When Taco Bell introduced its 39, 49 and 59 cent menu in the 1980s, we Gen Xers knew to the penny what combination of menu items we could afford that week. Some of us who waited tables had ready cash on hand to spot a pal a crunchy taco or bean burrito. On good days, we might even have a little extra to add in some pintos 'n cheese with the solid lid of cheddar cheese on top.

In 1985, Taco Bell introduced the Pizzazz Pizza, which eventually became the Mexican Pizza. For teens and broke college kids, it was a menu item that was ordered when funds were a little more on the positive side. It had two crispy shells with seasoned ground beef and refried beans layered inside. It was topped with tomato sauce, three cheeses, diced tomatoes, green onions and sliced black olives. The green onions and black olives were eventually taken off the pizza, probably due to the fact that young people usually ordered the pizzas without them anyway.

The decision to remove the Mexican Pizza from the menu in November 2020 was made, according to Yum! Brands, due to the environmental impact of its packaging. What followed were petitions galore, a rap song by Doja Cat and even a Tik Tok special called Mexican Pizza: The Musical. The musical streamed on September 15, 2022 and included celebs such as Dolly Parton and Doja Cat, who takes credit for bringing the Taco Bell treat back. 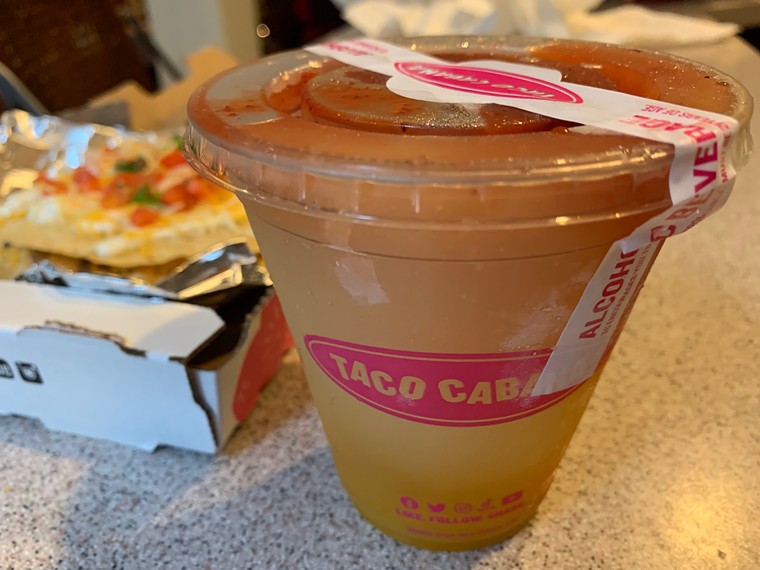 Taco Cabana's Mangonada Margarita surprisingly packs a punch.
Photo by Lorretta Ruggiero
However, when Taco Bell reintroduced the Mexican Pizza in May 2022, customers who rushed back in hordes were often disappointed because the pizzas routinely sold out. I was one of those customers. Stopping to pick up a few bean burritos for my cross country-running teen last summer, I was denied my craving because they didn't have the ingredients. Looking over the new menu, I saw that many things had disappeared. When I asked about a grilled steak taco, I was told it was no longer on the menu but that they could make me one. Rather confusing but apparently part of Taco Bell's M.O. Let's not get started on its other dropped items.

Now, the supply issues for the Mexican Pizza seem to be remedied but there are other points of contention regarding the reintroduced pizza. Some felt the crusts weren't quite as crispy as before but the Taco Bell website says the ingredients are all the same.

I didn't think much more about Taco Bell's Mexican Pizza since middle-aged spread and disgust with fast food's infiltration of our food systems has made me more cognizant of what I eat. I am not anti-fast food, just aware of its nutritional and environmental impact. However, I received a press release recently announcing a new Double Crunch Pizza ($4.99) at Taco Cabana. I was intrigued. I had to see how it stacked up against Taco Bell's much loved version. 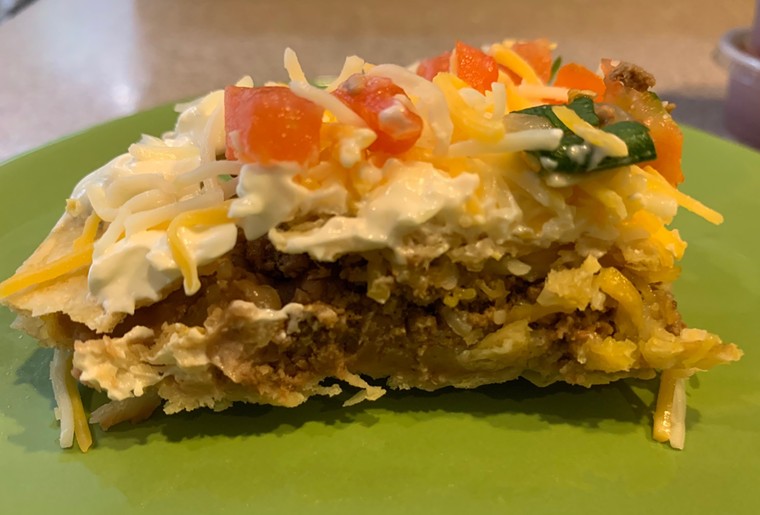 Taco Cabana's Double Crunch Pizza doesn't skimp on the filling.
Photo by Lorretta Ruggiero
Taco Cabana is a Texas-based chain founded in San Antonio in 1978. Unlike Taco Bell, many of its salsas are made fresh along with its flour tortillas and other items. It also differentiated itself from its Tex-Mex rival by offering beer and margaritas in a more fast-casual style and its patios have been home to many late night gatherings.

Since my husband Classic Rock Bob was out running errands, I asked him to pick up a Double Crunch Pizza and a margarita or two. During the pandemic, Texas liquor laws were amended to allow restaurants to sell alcoholic beverages along with food purchases. Most restaurants served the liquor on the side in sealed mini-bottles and Taco Cabana did the same with its margaritas. They were virgin drinks with a tiny bottle of tequila to mix in. Now, the restaurant serves the margaritas sealed with the liquor already blended in. It's an improvement because the liquor keeps the frozen margaritas from melting as quickly. The Double Crunch Pizza delivers on the toppings.
Photo by Lorretta Ruggiero
My Double Crunch Pizza arrived in a purple cardboard box with a foil liner. That helps to keep the box recyclable. The Taco Cabana pizza is two crispy shells that are a blend of flour and corn, which I love. H-E-B grocery stores sell a blended tortilla and I think it's the best of both worlds.

The six-inch pizza was loaded with grated cheese, pico de gallo and a hefty drizzle of sour cream. Like the Taco Bell Mexican Pizza, it has refried beans and seasoned ground beef in between the shells. It also has chipotle ranch dressing and more cheese inside. I am not a big fan of chipotle but it was not an obtrusive amount. Unlike Taco Bell's version, the cheese was not melted which was a little bit of a downside. Overall, it was a fresher take on the Mexican Pizza with the pico de gallo adding a palate-pleasing vibrancy. I regrettably realized that this might become a fast food craving. Taco Bell's Mexican Pizza has a competitor.
Photo by Lorretta Ruggiero
I had to compare the two, so a few days later, I ordered the Taco Bell Mexican Pizza ($4.99). When I opened it, it was just not as visually pleasing as Taco Cabana's pizza. The melted cheese was carelessly distributed with some of it stuck like glue to the container. The pizza sauce just didn't taste as it did years ago. While Taco Bell's meat and bean flavors are almost burned into our culinary memories, it was not as satisfying as it used to be. It was still good but not as crave-worthy. 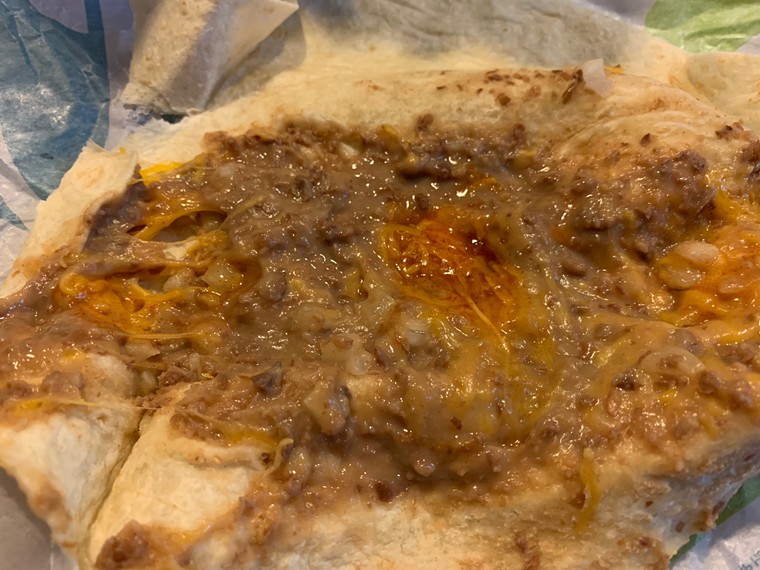 An old favorite disappoints.
Photo by Lorretta Ruggiero
I had added some bean burritos to the order for my son. I used to be a huge fan of Taco Bell's bean burritos but I will no longer eat them because they look and taste like... something that is not good. And after having tried the bean burritos at Taco Casa, Taco Bell's version doesn't even compare. Unfortunately, there's only one Taco Casa in the Houston area and it's in the wilds of Cypress. If you're a bean burrito lover, though, it's worth the drive. However, Taco Casa's refried beans are not vegetarian.

I felt pretty blah after eating the Mexican Pizza from Taco Bell but not Taco Cabana's Double Crunch Pizza. Both certainly filled me up but I didn't feel slightly sick with Taco Cabana's version like I did with Taco Bell's.
click to enlarge 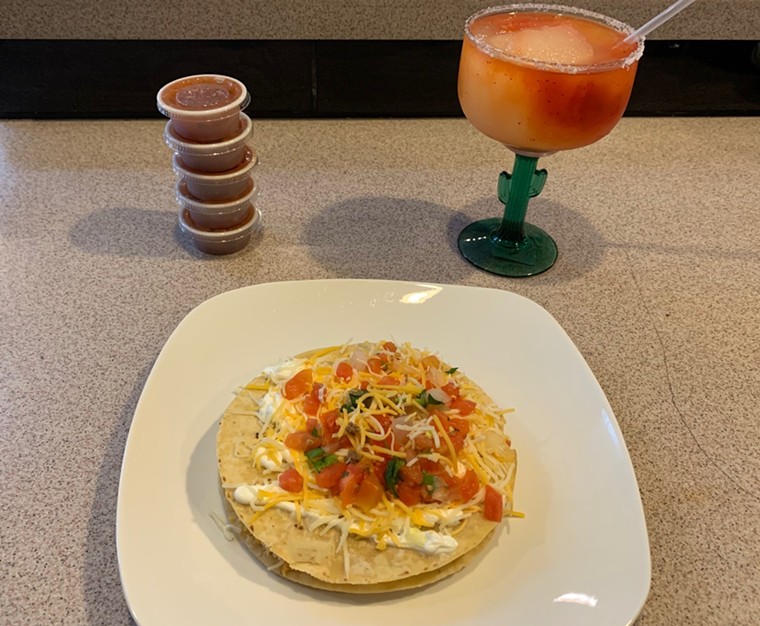 The Double Crunch Pizza is about to get some extra salsa.
Photo by Lorretta Ruggiero

With the New Year rolling upon us, I decided to have another taste of Taco Cabana's Double Crunch Pizza before my healthy-eating resolutions are attempted again. I also ordered one of its frozen Mangonada Margaritas. It made a festive late lunch after I plated my pizza and poured my rita into a salted glass. I don't know if my friendly demeanor in the drive-thru earned me a particularly hefty pizza but it was definitely loaded even more than the first one I sampled. I was also given five plastic ramekins of Taco Cabana's freshly made red salsa for an added bonus. It was worth the calories on a hot winter's day in Houston.

We apologize in advance for any New Year's resolutions that might be broken due to this review.
KEEP THE HOUSTON PRESS FREE... Since we started the Houston Press, it has been defined as the free, independent voice of Houston, and we'd like to keep it that way. With local media under siege, it's more important than ever for us to rally support behind funding our local journalism. You can help by participating in our "I Support" program, allowing us to keep offering readers access to our incisive coverage of local news, food and culture with no paywalls.
Make a one-time donation today for as little as $1.