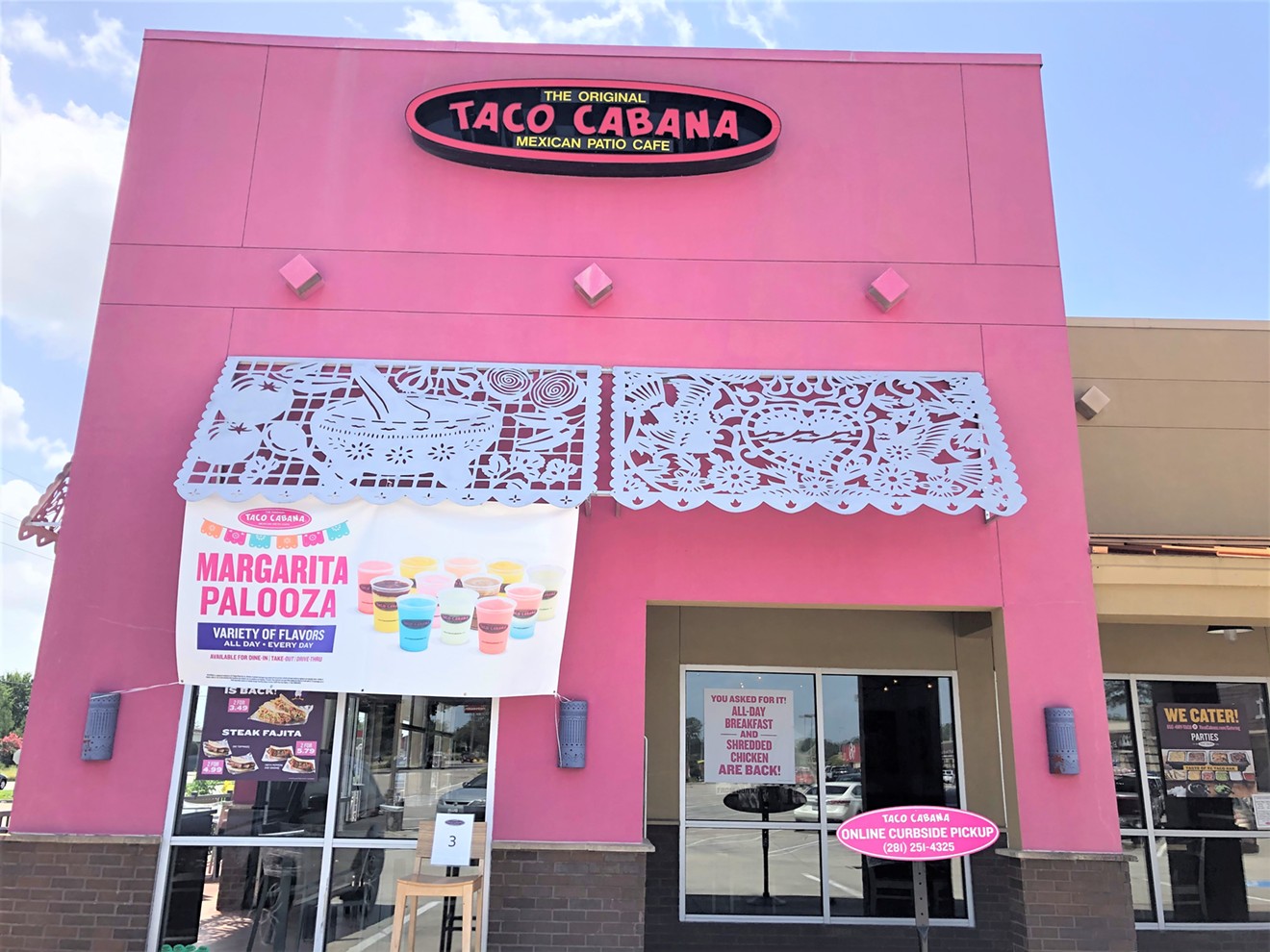 Taco Cabana introduced its Margarita Palooza on July 3, just in time for the Fourth of July weekend, as we reported here in the Houston Press. The two dollar price tag and promise of 12 different flavors was too much temptation for this writer and her husband to pass up, despite the fact that we had given up on Taco Cabana due to some not-so-wonderful experiences.

Taco Cabana had previously been a dependable standby when we didn't want to fork out big bucks for a sit down Tex-Mex meal and $9 margaritas. When the kids were younger, it was an easy place to grab some quesadillas, nachos and cheapo ritas, especially during its happy hour. While I usually found the food mediocre, I loved the fresh salsa bar. If the food was bland, it could always be livened by the various salsas and fresh pico de gallo on offer. 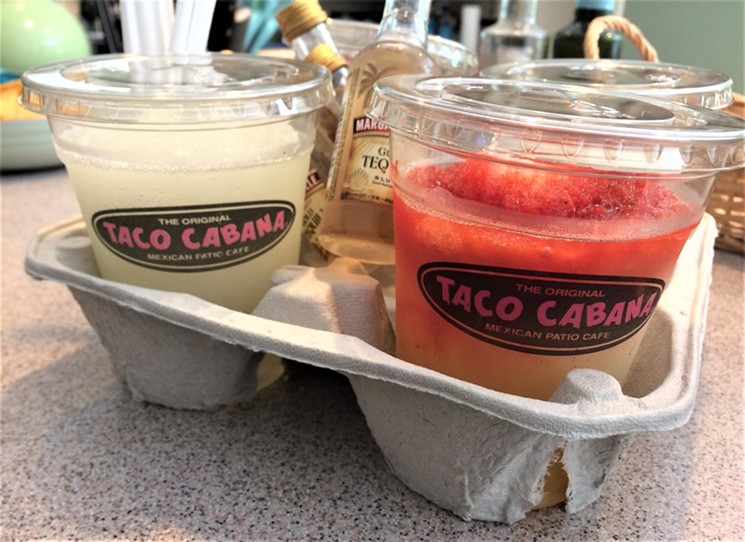 A four pack of fun from Taco Cabana.
Photo by Lorretta Ruggiero

Unfortunately, the closest location to our house, at 21121 Tomball Parkway, was rarely on point service wise and the quality of the food varied. The margarita machine seemed to suffer from the same condition that many McDonald's shake machines across the country are plagued by in that the margaritas weren't always frozen. While I enjoy good margaritas on the rocks, I stick to frozen when the ritas are cheap. I can enjoy the slushy goodness without caring about the cheap tequila.

Despite our misgivings, we decided that $2 margaritas are too good a deal to pass up. We have still not made it out to our favorite Mexican restaurants for a sit down meal since the pandemic began. We have ordered take-out from them, but $36 worth of margaritas that are halfway melted by the time you get home seems a waste of money. We figured we had nothing to lose when just a couple of bucks are on the line. Star Spangled became mangled.
Photo by Lorretta Ruggiero
Like everywhere else in Texas, customers are required to order food with alcohol purchases at Taco Cabana. We ordered and paid online. I sent my husband, Classic Rock Bob, to pick it up. When he arrived home, our order was missing a few add-on quesos and the bean and cheese tacos seem to have shrunk majorly but the margaritas were our focus.

The margaritas were filled about three-fourths of the way in a 16 ounce to-go cup. The tequila itself was served on the side in 50 ml. bottles such as you get on airplane flights (remember those?). The tequila was Margaritaville Gold, which seemed pretty decent to me. I am not bragging, but I've drunk worse. Taco Cabana has brought back Breakfast All Day.
Photo by Lorretta Ruggiero
Classic Rock Bob went for the plain lime, because he's boring that way. The first up for me was the Star Spangled Banner. It wasn't as attractive as its online photos which happens in both dating and fast food. However, it was to be expected after a ten-minute ride home. I stirred in the little bottle of tequila, which muddled the red, light green and blue colors making it even less attractive. However, it was tasty. It's a layered mix of the strawberry, lime and blue Curacao flavors. Taco Cabana's standard lime margarita can be tart, so the sweetness from the other flavors tempered the tang a bit.

I decided to taste the Frose and the Watermelon before stashing them in the freezer for later. The Watermelon had a mild hint of flavor but the Frose tasted strange, probably because I sucked it through a straw and got mostly the Frose flavor from the bottom. I don't know if they really use rose wine or if it is a flavoring but it had a herbal and slightly chemical taste that I wasn't terribly fond of. Later, after they had frozen a bit, I whizzed them both together in a blender with the tequila. That helped to properly blend the alcohol and mixing the two flavors worked well. I poured them into salted stemware and it was a nice late afternoon treat on a hot summer's day. Taco Cabana margaritas can be gussied up.
Photo by Lorretta Ruggiero
Later in the week, the desire for something cool and icy hit again. I sent Classic Rock Bob off for another rita retrieval much to my teenagers' delight in having fast food twice in one week. Though we hadn't been overly impressed with the food the first go around, Taco Cabana scored some bonuses in round two.

When CRB opened the bag, the margaritas looked more frozen this time and were served in 12 ounce cups filled near to the rim. The Mangonada was quite pretty with the red of the chamoy sitting on top of the orange mango like a West Texas sunset. CRB went for the lime again, but the Mangonada was mine, all mine. The sweetness of the mango was balanced by the sour and salty flavor of the chamoy, an ingredient that can be added to any of the flavors for no additional cost. This was one of my favorite flavors, up there with the Star Spangled Banner. I put the Dr Pepper and Mojito margaritas in the freezer to have later in the evening. A welcome break from the daily news.
Photo by Lorretta Ruggiero
The food this go around was much better. Though the salsa bar is closed in compliance with the dining restrictions, customers can order the salsa rojo and pico de gallo online. It's a little disappointing that the creamy ranch salsa and salsa de fuego aren't available, but times are tough.

I ordered a naked chicken fajita taco. There are plenty of toppings that can be added for an additional cost like sour cream, guacamole and cheese but I like it with just the fresh pico de gallo. TC does it right with its pico. The jalapeno bits may be a little large but there's plenty of cilantro, not too many onions and the tomatoes are perfectly ripe. Taco Cabana delivers on the fresh pico.
Photo by Lorretta Ruggiero
My daughter's flautas were much better this time, too, as was the queso. The previous queso was watery while this time, it was nice and thick with a good ratio of chiles. We had ordered one breakfast taco with bacon, egg, and cheese in a flour tortilla since Taco Cabana is currently offering Breakfast All Day. We somehow ended up with an extra so my 16-year-old son was happy to polish that off. It was filled with scrambled eggs, a long strip of bacon and shredded cheese. Taco Cabana's tortillas are housemade. They are a little thicker and fluffier than most flour tortillas which may have purists shaking their heads. However, they are perfect for dipping into queso.

A sad sight indeed.
Photo by Bob Ruggiero
Later that evening, I took out the Dr Pepper and Mojitorita out of the freezer and gave them a quick whir in the blender. I decided to forego the tequila in the Moijitorita and add some rum from my liquor cabinet instead. It didn't taste anything of mint, an ingredient found in the typical mojito. It just tasted like a regular lime margarita. The Dr Pepper had just a slight hint of the soft drink flavor so if you're a Pepper, this isn't going to satisfy your cravings but it was fine for me. It was still a margarita of some sort. There are other flavors such as Prickly Pear, Passion Fruit, Strawberry and Mango.

To-go margaritas from Taco Cabana are great for backyard quarantining.
Photo by Lorretta Ruggiero
Taco Cabana has locations across Houston and much of Texas. Most are open for walk-in, curbside and drive-thru, with some patios open for dining.  While restaurants are struggling with the pandemic restrictions and learning to adapt to a new way of operating, Taco Cabana has made a wise move in offering bargain margaritas for the summer. It brings in customers for the fast food Tex-Mex restaurant while offering a budget-friendly option when many people are staying home and cutting costs.

With a few Taco Cabana margaritas stashed in the freezer, a patio party can happen anytime, even during quarantine.
KEEP THE HOUSTON PRESS FREE... Since we started the Houston Press, it has been defined as the free, independent voice of Houston, and we'd like to keep it that way. With local media under siege, it's more important than ever for us to rally support behind funding our local journalism. You can help by participating in our "I Support" program, allowing us to keep offering readers access to our incisive coverage of local news, food and culture with no paywalls.
Make a one-time donation today for as little as $1.