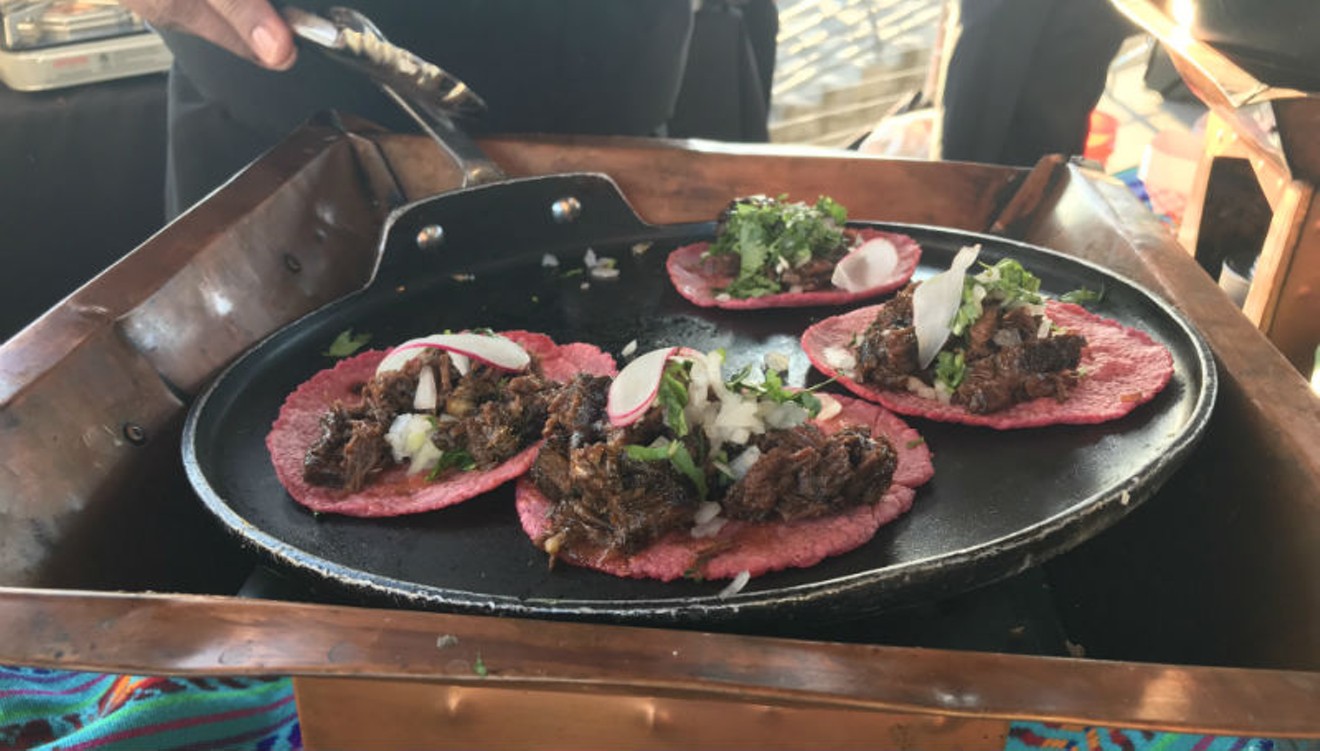 Mmmm Hugo's. Photo by Kate McLean
As the clock struck 4 p.m. the bulls were released into the breezy Water Works event space at Buffalo Bayou Park. It felt exactly like the streets of Spain, except there were several bulls, all holding paper trays, and running to get out of the way were thousands of helpless tacos. The tacos did their best to survive, but then again, they never really stood a chance. Lots of white onions perished too.

With the fourth annual Houston Press Tacolandia underway, what better river boat guide than DJ Ebonix rippin' the past and the present.  He kept everyone at a steady bounce as they waited in line— in the name of tacos. The Rice University mariachi band Luna Lllena kept the pep as well with many of their members stepping up to rock solos. A talented crew indeed.

Thanks again, Mission Foods, for sponsorship and supplying many vendors with your delicious flour and corn tortillas; especially the cute bite-sized ones. It would be hard to paint a picture without a canvas.

Here are a few notable bites of the day, as well as the official winners and a few unofficial mentions…

"I purposely did not drain the fat off," said chef Rishi Singh of Boheme. 'Atta boy. The oak smoked barbacoa was moist and delightfully drippy, and the pickled onion relish cut through it all with purpose.

La Fishería had great presentation and flavor. It's always nice to see restaurants stepping out of the box with proteins; they served pulpo (octopus) and tripa (tripe). The pulpo was tender and tossed in a warm tomato-like sauce with pickled relish, cilantro, and crisp leeks to garnish. The tripa tacos were braised in mole, yay. And out of all the green salsas on the lawn that afternoon, theirs had the classiest delivery of heat.

"The taco truck guy, go find the taco truck guy." Tony Luhrman, chef owner of El Topo was stationed below the event space and frequently walked delicious tacos back and forth in the VIP area. His tortillas were legit, his braised 44 Farms meat was legit, and the splash of red onion pickle on top was legit too. All-in-all it was a legit bite.

What's a taco party without a tip of the hat to Hugo's? They made their tortillas freshy-fresh with red, white, yellow, and blue corn— but we knew they would. Their chachetes de Res, beef cheeks, cooked in mole were tender and delicious.

La Calle had the best tacos al pastor on the lawn for sure. You gotta roast that pineapple and they did. The caramelized sweetness was just enough with the perfectly seasoned pork. It was hard to choose because the carnitas were expertly handled as well. Luckily, they built me a choo-choo train where the engineer was the pastor and the caboose was carnitas.  All aboard. Oh, and garnishing with crisp chicharónnes? Ay papi.

Mama Ninfa's Taco y Tortas, the fast-casual restaurant that will open in the Understory food hall, had a great showing. I regret not bringing a bigger purse, and I regret not bringing Ziploc bags. Their lengua tortas made with coleslaw and chow-chow on El Bolillo buns were a welcome surprise in a sea of flat carbs. The whole bite was a memory I will not soon forget. The barbacoa on La Espiga De Oro tortillas was just as good.

Not to spoil the surprise, but Max's Wine Dive won a few. Chef Brandi Key was there flippin' tortillas and garnishing too. They made a mole braised 44 farms short rib, which was juicy and tender. The added balance with árbol crema as well as guajillo chili sauce made for one of the most head-turning tacos. Shout out to chef Chris Loftis; I see you, brother.

Peli Peli Kitchen had the most fun taco tent. Owner Thomas Nguyen dressed as Taco Lovin' and served guests thick flour tacos filled with creamy piri-piri braised 44 Farms flat-iron steak. It was tender and packed with flavor. The crisp onions on top made for a fun crunch.

The Rainbow Lodge brought Braised Rabbit Tinga Tacos, the fermented chili and carrot sauce on top was muy caliente and muy interesante. And, I am just now getting the joke. Bunnies do love their carrots.

Bundt Cake-a-Holic made Apple Crown Tacos on flour tortillas. The biggest takeaway was the Crown Royal caramel sauce. They should think about bottling that.

Tony's Mexican Restaurant hit hard with authenticity. Tortillas slapped right off the flat-top were stuffed with barbacoa, chicharónnes cooked in green sauce or barbecue chicken. The barbacoa was exceptional; it was head meat, cooked perfectly, shred perfectly, and glistening with just enough face fat— which should be a lot. Their chicharónnes were equally well done, no chewy bits— all melt-in-your-mouth. Tossed in a spicy green sauce, it was the best kind of heat to cut through a rich protein like pork belly skin. Oh, and I'm really happy they brought that ground chili di árbol oil.

The Official Winners (The first five categories were judged by a panel consisting of Chef Bryan Caswell as well as Houston Press contributors Carlos Brandon Lorretta Ruggiero, Marco Torres and this writer.)

Best Crepe: The Culinary Institute LeNôtre brought crepes to a taco party. And that is why we love the French.

Best Green Salsa: La Fishería. It hurt; it hurt so good. I could have sworn there was a habañero kick in it, though Jesus, who was working the station said no. Still…

Tony's warmed their corn tortillas on a flat top, while slathering barbacoa braising liquid all over. Was that really necessary? Uh, yes.

Hugo's made theirs fresh; duh. That masa is no joke, son.

Didn't have a chance to clarify with El Topo; but I'm 99 percent sure they were fresh pressed as well. That masa flavor and those toast marks don't lie.

Best Not A Taco Tent: el Jimador. This tent had it all; shot glasses of tequila concoctions, face painting, and the opportunity to take a picture with a shirtless luchador.

Thomas Nguyen, co-founder of Peli Peli as Taco Robin. (Costumes built around the Robin speedo-eye mask profile is a fast track to the winners circle.)

And the woman that came as a taco— that was awesome.

Restaurant that the judges felt most guilty for not being able to award anything: La Fishería, we did love you. Houston Press food writer and judge Lorretta Ruggiero is especially taking this one hard.

Longest line: I wouldn't know, as a judge I cut them all. Ayyyy.
KEEP THE HOUSTON PRESS FREE... Since we started the Houston Press, it has been defined as the free, independent voice of Houston, and we'd like to keep it that way. With local media under siege, it's more important than ever for us to rally support behind funding our local journalism. You can help by participating in our "I Support" program, allowing us to keep offering readers access to our incisive coverage of local news, food and culture with no paywalls.
Make a one-time donation today for as little as $1.