The tikka masala at Tarka is bright and tasty. Photo by Tarka

Tarka Indian Kitchen, 3701 S. Shepherd, is slated for a mid-January opening. The ground breaking has already begun in Upper Kirby for the third location of this Austin-based fast casual Indian restaurant. Overall, there are nine locations in Austin, Round Rock, San Antonio and Cedar Park. The new location will hire 35 people.

Tarka serves traditional Indian dishes such as curries, kabobs, biryanis plus signature items like the Masala Fries. The flatbreads including naan and roti, are fresh-baked to order. There are vegetarian, vegan and gluten-free options. Diners can enjoy a mango lemonade or fresh fruit lassi plus there is also wine and beer available.

The chicken is all natural and the lamb is pasture-raised and halal.

Get your cauliflower fix with aloo gobi.
Photo by Tarka
The 3,000 square foot restaurant will have an open kitchen, a patio and a modern dining room featuring a unique mandala mural from a local artist. A mandala is an ancient geometric symbol important to the Hindu and Buddhist religions.

Jeni's Splendid Ice Cream, 375 W. 19, will have a grand opening January 9, 2020 from 7 p.m. to 11 p.m.. Everyone will get a free scoop of ice cream, but the first 50 early birds will also get a swag bag. The Heights location is taking over the former Carter& Cooley space. The longtime cafe closed August 31 after three decades.

This is the first foray into the Houston market for the brand. It was founded in 2002 in Columbus, Ohio by owner, Jeni Britton Bauer, who had opened a different artisanal ice cream store in 1996 called Scream. Bauer was a pioneer in the hand-crafted ice cream industry in the United States and has expanded to over 40 locations.
She also won a James Beard Foundation award in 2012 for her cookbook Jeni's Splendid Ice Creams at Home. 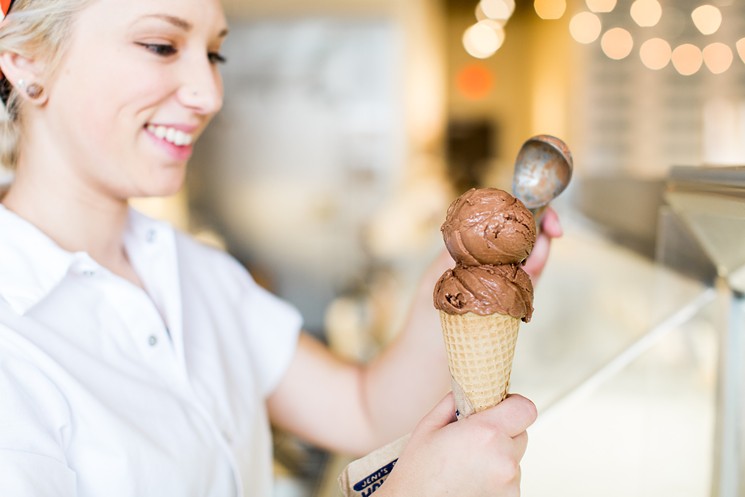 Grand opening attendees will be able to meet Bauer who will be at the event. 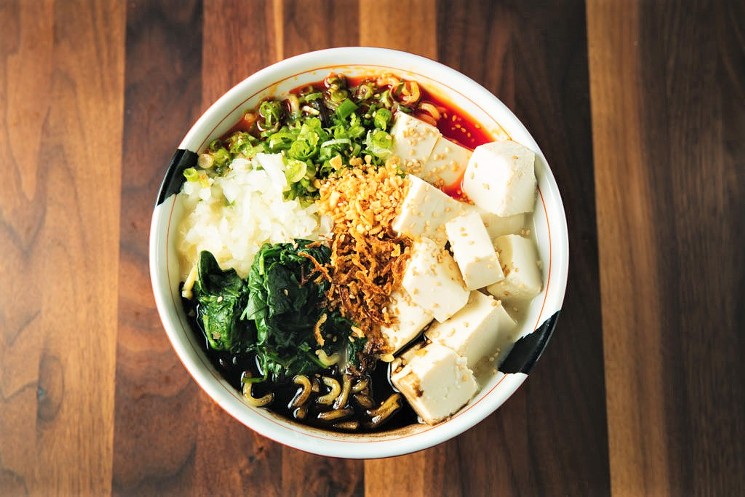 The spicy and creamy vegan ramen at Jinya will satisfy veg lovers.
Photo by Takahiro Yamauchi

Jinya Ramen, 13509 University, opened its eighth Houston area location December 16 in Sugar Land. The ramen restaurant first began in California founded by Tomonori Takahashi who came to the U.S. in 2010. Takahashi had previously owned an Izakaya -style restaurant called Jinya in Tokyo in 2003.

The restaurant is popular for its slow-simmered broth and its modern approach to ramen. There are hearty flavors like the Tonkatsu Black or Tonkatsu Spicy and for vegans, the Flying Vegan Harvest. Small plates include takoyaki (octopus balls) and caramelized cauliflower. Besides a variety of ramen, there are rice bowls and curries, plus mini tacos like salmon poke and spicy tuna. Vanarin Kuch's pastries are creamy and dreamy.
Photo by Andreas Hager
Koffeteria, 1110 Hutchins, opened November 23. The pastry shop comes from former Top Chef contestant and Tiny Boxwoods alumnus Vanarin Kuch.  After several years at Tiny Boxwood's, the Houston native worked in New York at places like Boulud Sud and Gotham Bar and Grill before his most recent stint as pastry chef for The Albert at EMC2 in Chicago. He has returned to Houston and opened his own bakery in East Downtown.

Kuch is creating items like beef pho kolaches, Hot Cheeto croissants and biscoff cronuts. There are a variety of daily pastries and some special dishes for the weekend like carbonara quiche. The Salty Cambodian is the Cambodian-American chef's take on Vietnamese coffee. He adds sourdough butter to the espresso, according to Houston Food Finder.

Thieves are weenies.
Photo by Vanarin Kuch
Unfortunately, Koffeteria was broken into December 19 at 3:30 a.m. in the morning. The thief destroyed the front  door, leaving a mess of broken glass next to the decorated Christmas tree. However, one of the neighboring businesses has footage of the thug. There have been other break-ins in the area as well. Not a good welcome home to a native son, so let's show our support by treating ourselves to some of Kuch's tasty pastries and ordering some of his delicious pies for the holidays.

Koffeteria is open Wednesday through Sunday from 8 a.m. to 5 p.m. After 4:30 pastries are 50 percent off. Fajita Pete's will set you up with meats.
Photo by Pedro Mora

Fajita Pete's, 201 South Egret Bay Boulevard, softly opened December 13 in League City. It's also the 13th Houston area location for the brand which has franchises in Dallas and College Station as well. It serves a variety of fajitas including Angus beef, chicken, shrimp and vegetable. They come with all the accoutrements like rice, beans, pico de gallo, sour cream and flour tortillas. They also have enchiladas, burritos and quesadillas.

Guests can dine in and enjoy a margarita, but Fajita Pete's does much of its business through take away, delivery and catering. Some locations even have take away margaritas. 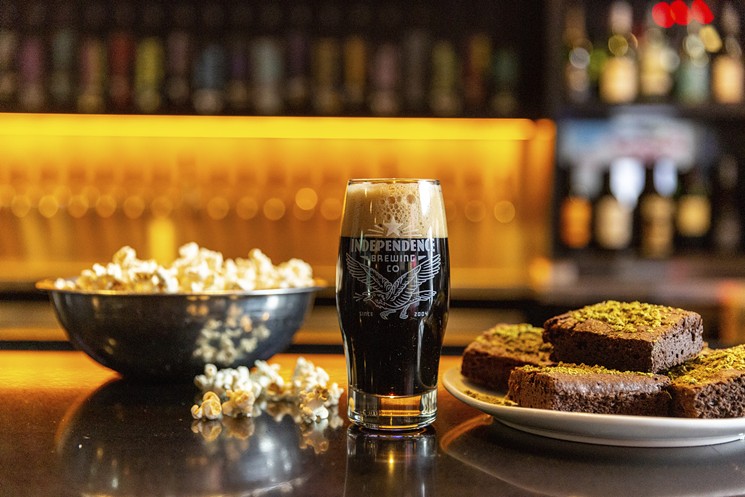 This brownie is legal in Texas.
Photo by Kirsten Kaiser

Alamo Drafthouse has teamed with Austin-based Independence Brewing to bring a 2019 version of its limited edition holiday beer, End Credits. This year's brew is made with high-alpha hops and a blend of chocolate malts, cocoa powder, cocoa nibs and fresh hazelnuts. It's meant, per a press release, to "bring out the inner stoner in you". It's termed a Hop Brownie Ale for that reason.

It will be available at all 21 Alamo Drafthouse locations in Central Texas. It pairs well with popcorn, if you get the munchies.

CiCi's Pizza, 935 Shepherd, has closed, according to a reader's tip. There is a sign in the window thanking customers. We tried to reach the store by phone, but the number has been disconnected.
KEEP THE HOUSTON PRESS FREE... Since we started the Houston Press, it has been defined as the free, independent voice of Houston, and we'd like to keep it that way. With local media under siege, it's more important than ever for us to rally support behind funding our local journalism. You can help by participating in our "I Support" program, allowing us to keep offering readers access to our incisive coverage of local news, food and culture with no paywalls.
Make a one-time donation today for as little as $1.