The 10 Best Places to Eat During the Super Bowl This 36-ounce, wet-aged 44 Farms porterhouse is just one of the beautiful cuts at One Fifth Steak. Photo by Julie Soefer Photography

With Super Bowl LI in town, Houston has been receiving a bevy of national attention. A lot of that has focused on just how much the city has changed since the last time it hosted the Super Bowl, in 2004, and we couldn’t agree with that sentiment more. For starters, there’s the fact that back then, Discovery Green was just a parking lot, and that the Houston area's population jumped from 5.1 million to today’s 6.6 million. And then there’s the food scene.

In 2004, Houston’s culinary landscape was — for the most part — an unnurtured diamond-in-the-rough. Today the city is experiencing a full-blown culinary renaissance. As one of the most culturally diverse cities in America, “Mutt City” dining reps a mosaic of ethnicities, from tiny mom-and-pop shops dotting neighborhoods like Montrose and Chinatown to fine-dining restaurants changing the way we think about Houston food.

It’s hard to get a taste of it all, so we put together a list of homegrown eateries (both longtime favorites and today’s hottest tickets) that best showcase the city’s diverse culinary palate. These aren’t just “any” restaurants. Each is at the top of its game and checks off one major criterion: You won’t find anything like it anywhere but Houston.

Note: Some top critic darlings, including The Hay Merchant/Underbelly and Oxheart, are already booked up or closed for private events for the majority of the week, but there are still plenty of places that shine.

One Fifth Houston
1658 Westheimer
Locals were saddened to say good-bye to longtime fine dining establishment Mark’s American Cuisine when it announced its closure last year. Luckily it didn’t take long before one of the hottest chefs in the city announced his game-changing plans to take over the iconic space (housed in a former church, it was perhaps one of the most beautiful restaurants in Houston). Over the next five years, chef Chris Shepherd and his team will turn One Fifth Houston into five separate restaurant concepts. The first up, open now, is One Fifth Steak. Just like at Underbelly, the goal here is to emphasize all cuts of the animal, and while there is definitely a focus on beef, an impressive raw bar (a cold seafood tower comes in two sizes, “big” and “bigger”) and dishes inspired by local produce also await. Go for Shepherd and chef de cuisine Nick Fine’s dry-aged, 44 Farms long-bone rib eye or wet-aged 100 day hanger steak, then tack on comfort food sides like pot roast braised carrots, sweet potato gratin and bacon sausage creamed greens. There’s even a 1.5-pound wood-fired apple pie with cheddar ice cream to hit the sweet spot at the meal's end. 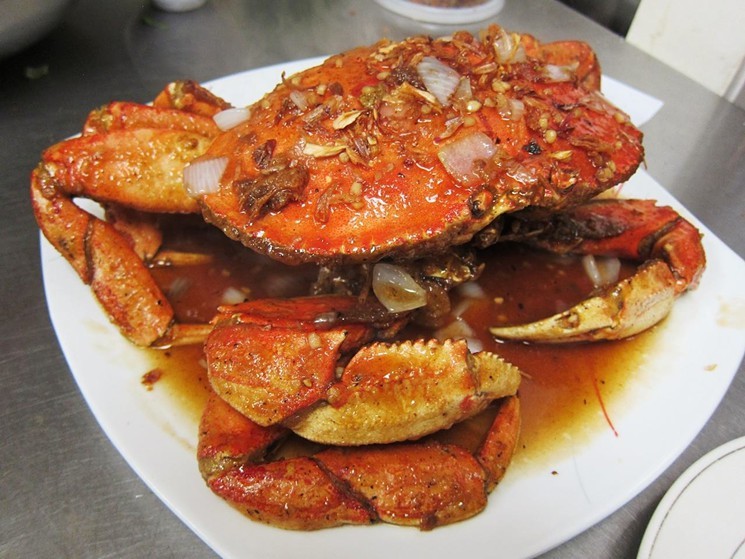 It's not all about the mudbugs at Crawfish & Noodles, as proven by this gorgeous tamarind Dungeness crab.
Photo by Mai Pham
Crawfish & Noodles
11360 Bellaire, 281-988-8098
Crawfish season is in its early stages, but if you’re taking a YOIHO (you’re only in Houston once) mentality, the time to peel, pinch and suck up mudbugs is now. Just outside of Chinatown, Vietnamese hot spot Crawfish & Noodles does them the Mutt City way, in Cajun-Asian style. You’ll want to get messy here (don’t worry, there are paper towels); but getting your hands dirty is worth it for the garlic-butter-soaked crawdads, and stir-fried blue crabs stacked high and bursting with flavor. Pro tip: Get a few orders of banh mi (hunks of fresh bread) to sop up every last bit of juice.

Hugo's
1600 Westheimer, 713-524-7744
With multiple Houston operations under their collective belt — including Hugo’s, Caracol and the brand-new Xochi — owner-chef Hugo Ortega and his wife and restaurateur, Tracy Vaught, are bona fide Houston legends at this point. Hit the chef’s namesake restaurant to see exactly why he’s been nominated for a James Beard award every year since 2012. Or perhaps more accurately, to taste why. You can do that through plates that read like a trip through Mexico, from Yucatan-style cochinita pibil (slow-roasted suckling pig) and bright ceviche Acapulqueño to huachinango a la Veracruzana (whole-roasted snapper).
Just make sure to save room for the sweet stuff, as Ortega’s brother, pastry chef Ruben Ortega, makes desserts that are absolute knockouts. 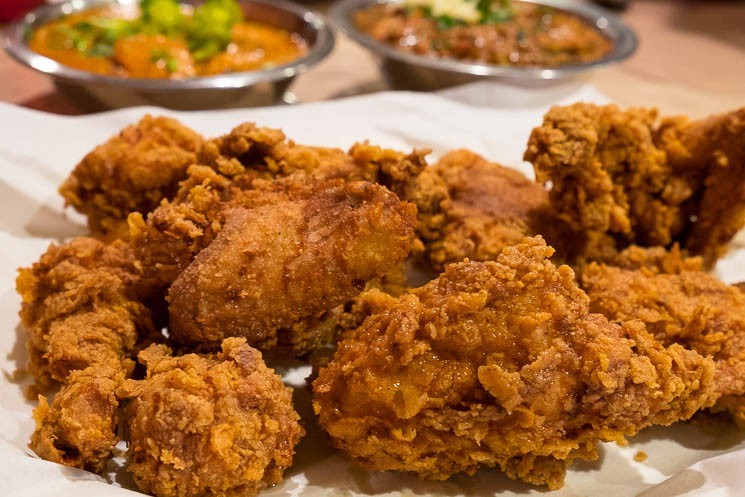 Himalaya's fried chicken (HFC) is nothing like KFC.
Photo by Phaedra Cook
Himalaya
6652 Southwest Freeway, 713-532-2837
Part of learning to love Houston is learning to love its tapestry of hole-in-the-wall, no-frills eateries. And Himalaya just so happens to be one of its best. Despite being up against all things Southern-fried, the Pakistani-Indian restaurant earned our vote for the Best Fried Chicken in our 2016 Best Of Awards. Affectionately known as “HFC,” chef-owner Kaiser Lashkari's fried chicken begins with a brine spiced with things like garam masala and ginger. After a nice, long soak, the bird is generously dredged in seasoned flour and fried to an absolutely gorgeous, golden-brown crisp before being served family-style. Just be aware: You may want to call ahead for this one, as it’s not always available and can very well sell out. If it does, you can still dive into plates of fork-tender lamb shank masala, complex chicken curries and hunter’s beef, a sort of Pakistani version of pastrami.

Riel
1927 Fairview, 832-831-9109
If you’re looking for what’s “haute” right now, this brand-new hit from chef Ryan LaChaine is one of the most buzzed-about restaurants today. The über-talented chef takes a touch of local inspiration, sprinkles in a little Ukrainian and French-Canadian seasoning, and adds a dash of Southern and Asian influence to create melting-pot fare that feels wholly Houston. Hit the 65-seater to feast on 44 Farms hanger steak with pierogi and horseradish cream, Gulf fish karaage and tourtière, a meat pie from Quebec by way of Houston. Bar offerings, including a solid roster of Scotch, bourbon and whiskey and specialty cocktails like the Borscht Sour, will round out that feast quite nicely.