There are lots of beers and lots of room at Holman Draft Hall. Photo by Jessica Johnson

There are lots of beers and lots of room at Holman Draft Hall.
Photo by Jessica Johnson
Holman Draft Hall, 820 Holman, opened January 19, as reported by CultureMap Houston. The large, light-filled beer hall from the Kirby Group will feature a wide variety of beers and wines on tap, with a three-zone cooler keeping the kegs at optimum temps of 32, 45, and 55 degrees, depending on the beverage. There isn't a set cocktail menu, but spirits are available as well as frozen concoctions created by another Kirby Group concept, Wooster's Garden, half a block away.

Chef Brandon Silva (formerly of Uchi and Holley's) will be in charge of the menu which will include  like fried green tomatoes and nachos, plus the signature Kirby burger. Chef Silva has also created 12 different wing sauces ranging in flavors from creamy barbecue to tamarind fish sauce. The wings are jumbo size.

Drafts beers and ciders are available in regular or large, while tap wines will be sold by the glass or liter. A standard wine bottle is 750 ml or 3/4 of a liter.

The spacious beer hall includes a huge covered patio and a spiral staircase leading up to a terrace overlooking the space, making it a spot for people watching and enjoying its happy hour which runs Monday through Friday, 3 p.m. to 6 p.m.

Oxbow 7, 1121 Walker, will no longer be under the direction of  Houston culinary couple, Bryan and Jennifer Caswell. Le Meridien Houston has released them from their contract, as reported by the Houston Chronicle, and it came as a surprise.

The restaurant's cuisine was touted as " elevated bayou cuisine", drawing from the couple's Gulf Coast backgrounds. " That's our life in there," Bryan Caswell said.

Bryan Caswell opened his first Houston restaurant, Reef, in 2007, after a number of awards and distinctions brought him fame and even Food Network celebrity. Unfortunately, August 2017, Hurricane Harvey dumped 4 inches of water through the roof at Reef causing the restaurant to shut down for extensive repairs and renovations. It is expected to reopen in mid-February.

Hurricane Harvey also delayed the opening of Oxbow 7. During that time, the Caswells focused on delivering meals and cooking food for first responders and victims in Houston and the Beaumont area, much of it from the still functional kitchen at Reef.

In addition, the Caswells shuttered their slider restaurant, Little Bigs, in September, due to rising rents at its Montrose location.

The anticipated reopening of Reef will hopefully be a bright spot in a tough year for Bryan Caswell Concepts as the restaurant debuts a new, more contemporary menu and redesign. There will be a long, curving chef's table, according to the Chronicle, where guests can watch the line cooks prepare the dishes and also serve them.

of Spice, 9102 Bellaire, opened late December in the Chinatown/Sharpstown area serving authentic Chinese food with some serious heat. For those with tender taste buds, the heat can be modified to fit your tolerance level. For the lovers of capsicum, do your damage.

Alfred's Burger House, 723 Telephone, had its grand opening January 15. There are big burgers made with house-ground beef, grilled chicken sandwiches, and salads. There is also beer to accompany the salad. We're kidding. It's a burger house. Have a burger.

CiCi's Pizza is updating its look and style.
Photo courtesy of CiCi's Pizza Buffet
CiCi's Pizza Buffet is changing with the times and the newest location at 5810 FM 1463 in Fulshear is showing it. The third Katy/Fulshear location for franchisees, Ken English and Kevin Cooper, will have a new color palette, chevron-styled table tops, updated booths, and a large game room. The restaurant had its grand opening January 22 with free pizza buffets to the first fifty guests.

Founded in Irving, Texas in 1983, the company invented the unlimited pizza buffet and has been the place to take little leaguers and soccer teams ever since. With the new prototype, the chain is upping their game and offering not only unlimited pizza, pasta, salad, soup dessert, but now guests can order personal pan pizzas made to order, included in the price of the buffet.

Captain T Seafood, 10815 Beechnut, is a fresh seafood market for wholesale and retail, but it is also a restaurant serving fried seafood favorites like shrimp and catfish, plus grilled and boiled dishes, too. The seafood market and restaurant had its grand opening December 26. Those in the know are heading there for the boiled crawfish that is coming into . The boiled seafood is available with Original Cajun, Garlic Butter, Thai Basil, or Captain T's Special .  The vision of clams, mussels, conch, fresh fish, and blue crabs awaiting you will bring you out of your seasonal affective disorder.


Twisted Turban, 2838 S Highway 6, opened December 22. The Tex-Indian restaurant is family-owned and is a fusion of Tex-Mex ingredients and Indian spices. Tacos, nachos burgers have all been taken up a notch with chicken , slow-cooked beef and a variety of condiments like mango salsa and tamarind chutney.

The graffiti-style mural of Houston, with the logos of its sports teams, gives it a fun, casual vibe. Delivery is available within a five-mile radius. 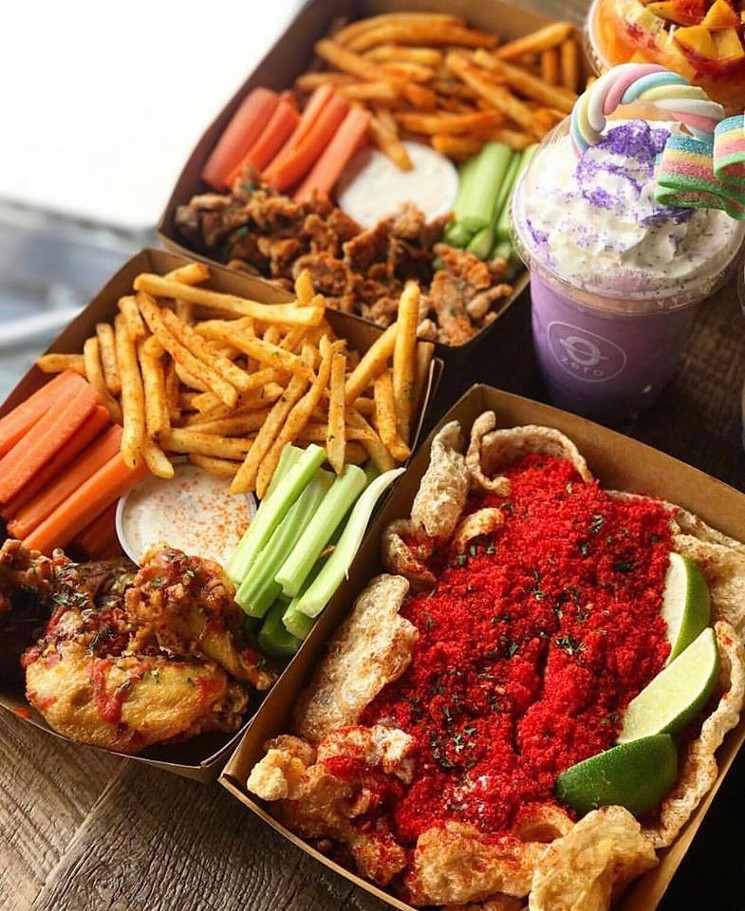 This is the food your mom wouldn't let you eat.
Photo courtesy of Zero Degrees

Zero Degrees, 6927 FM 1960 West, had its grand opening January 13. The boba tea, fruit smoothies mangonadas are bringing in the crowds to the Willowbrook store. There are two other Houston area locations in Kim Son Plaza and Katy. Zero Degrees also has 11 other stores in the western United States, seven of those in California.

The shop is known for its quirky snacks like Hot Cheeto Elote and popcorn chicken waffle cones. However, it's the Ube Shake, a purple concoction, garnished with a sour rainbow strip and a multi-colored marshmallow braid that will fulfill your Willy Wonka dreams. Unlike the Chocolate Factory, the scenery is not edible.

Yanni's has Greek sweets like baklava and honey cookies.
Photo by Lorretta Ruggiero
Yanni's Greek Taverna, 13203 Jones Road, is under new ownership. Previously Opa Greek Taverna, is the same, but the new owner, John Karageorgos, plans to tweak the menu and offer up some authentic Greek food, which comes from his forty-five years of restaurant experience.

Yanni himself.
Photo by Lorretta Ruggiero
A native of Lamia, Greece, Karageorgos came to the United States in 1973 and worked in restaurants in New Orleans where he fell in love with the Cajun cuisine. In fact, he's considering adding crawfish to his menu when it's seasonal.

Karageorgos previously owned The Cajun Greek in Galveston, which he sold in 2002 and Mediterranean Gardens restaurants in Lake Jackson. He retired in 2016 when he was diagnosed with diabetes, but Hurricane Harvey destroyed his Lake Jackson home and his automobiles, forcing him out of retirement. A stint at Walmart just wasn't cutting it, so he decided to take over Opa's and get back into the restaurant business.

Karageorgos, or Yanni as he likes to be called, hopes to have the beer and wine license by February, but it's BYOB until then. Or, if you're sweet, you might get a complimentary glass of wine.

Harlem Road Texas BBQ, 9823 Harlem, celebrated its grand opening January 12, with friends, family, and local celebrities coming out to show support for chef Ara Malekian. Trained in Switzerland, Malekian came to the U.S. in the late '80s, working with famed chefs like Wolfgang Puck. He became interested in barbecue and the new restaurant is creating in a city that expects a lot from its 'cue.

The Richmond area barbecue joint had a few obstacles in its first week with the abnormally cold temperatures and a brief hiccup with frozen pipes, but everything is back to business and success means days of sold-out barbecue for latecomers.

Get there early to enjoy the pork ribs or the brisket sourced from 44 Farms. Hours are a bit wonky: Wednesday through Friday, 3 p.m. to sell-out, Saturday and Sunday 11 a.m. until sell-out. Monday and Tuesday, the restaurant is closed.