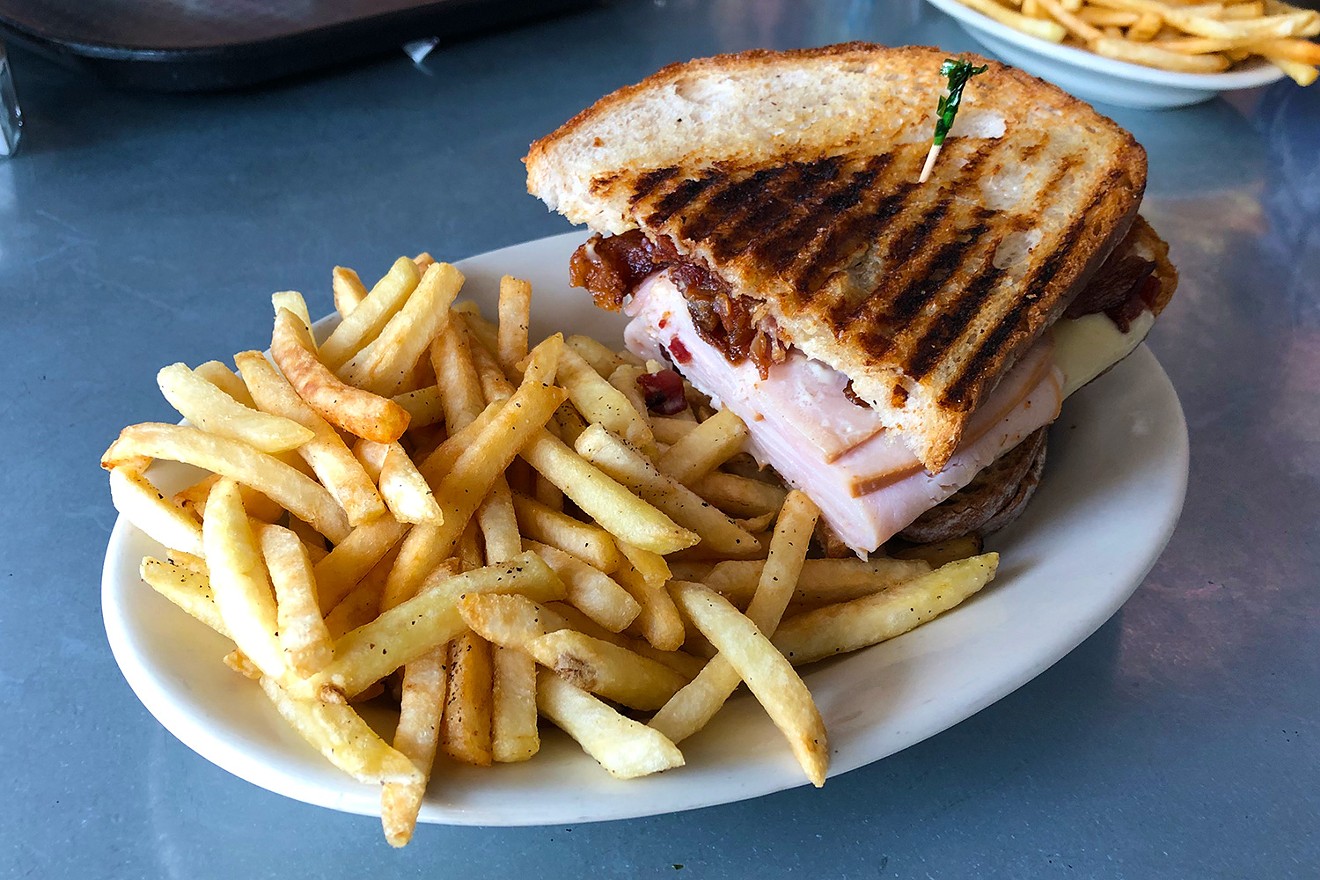 The Petronella at Paulie's is a monster panini rich in flavor and heavy on the crunch. Photo by Jeff Balke
We are in search of Houston's best sandwiches because we love sandwiches and we love Houston!

Look, I'm the first to admit that I have often gone to Paulie's Restaurant (1834 Westeheimer) simply for the cookies. Those shortbread sugar cookies, decorated for every season, are simply the best damn cookies in the city. I'll fight you over that. But, it's also a great spot for dinner or, as is often the case for me, lunch. And while, yes, the cookies and in-house made pasta are big draws, do not sleep on their selection of sandwiches, particularly the panini.

First, let's get this out of the way. This thing is massive. As my dining companion pointed out to me, it's basically two full sandwiches. Add a side of fries or pasta salad, and it's a carb fest — a festival, I might add, I can completely get behind.

Second, there are a bunch of good panini options from their take on a muffaletta in the Giacomo and the pizza-styled Pizzitola to the veggie Yezzi and the Italian sausage and peppers-based Principe. None of them are slouches, but my favorite is far and away the Petronella.

Named after the family that opened the joint (and still owns and operates it today), the Petronella is sliced smoked turkey and Swiss, which might sound boring until you realize the full weight of this panini (literally and figuratively). Did I mention this is a big freaking sandwich? It's made on massive slices of sourdough bread. If it wasn't cut in half, it would fill the entire plate.

But, it's also big on flavor. The smoke is subtle as is the mild cheese, but it's the combination of bacon (nice and crispy and crumbled in a huge pile on the turkey) and their house vinaigrette adds salt and a spiky tang that lifts the flavor profile from good to holy mother of God levels.

I'm not usually a big proponent of bacon on everything. To me, it often overpowers the flavors, but not in this case. The vinaigrette (I also typically add mayo for some creaminess) and the mild flavors of the turkey and Swiss are the ideal balance.

And since we're talking about big, this thing is HUGE on crunch. The bread is grilled to absolute golden perfection and the pile of bacon is as crispy as if you asked a short order cook for "crispy bacon" with your eggs and pancakes. I should also note I've had this sandwich many times and it is ALWAYS consistently great, a sign of a very good restaurant in my book.

Big on size. Big on flavor. Big on crunch. If you can't eat it all — and why would you since you are obviously saving room for cookies? — take the other half home. It's killer re-heated in a skillet too.