King Cake. You've probably had a stale grocery store variation at some point in your life. After all, the brioche-based, coffee cake-like treat that often comes slathered in festive icing and sugar isn't exactly a Houston specialty.

The king cake is a major Mardi Gras tradition, typically making an appearance on Twelfth Night (the twelfth day of Christmas and the first night of pre-Lenten festivities known as Carnival). The cake is said to honor the Magi, the three biblical kings who came bearing gifts for baby Jesus, who is also symbolized in the whole deal via a small plastic baby (America, y'all) or other small, keepsake objects. It's customary for folks to hide the baby in the cake. Then, if you find a baby in your slice without choking to death, you also have an obligation to buy the next king cake.

With Louisiana's culinary influence alive and well in the city, it's not surprising that two exceptional bakers are making incredible king cakes here in Houston. These two variations are entirely different from each other, but both rival the best king cakes you’ll find in Acadiana and New Orleans.

These desserts are fun to bring into the office or to a house party, pairing well with coffee, libations or even beer (a parade route staple). And of course, it’s the best way to tip your hat to Mardi Gras all the way from Houston. Just keep in mind, Fat Tuesday (the traditional cutoff for enjoying your king cake) is on February 28.
click to enlarge 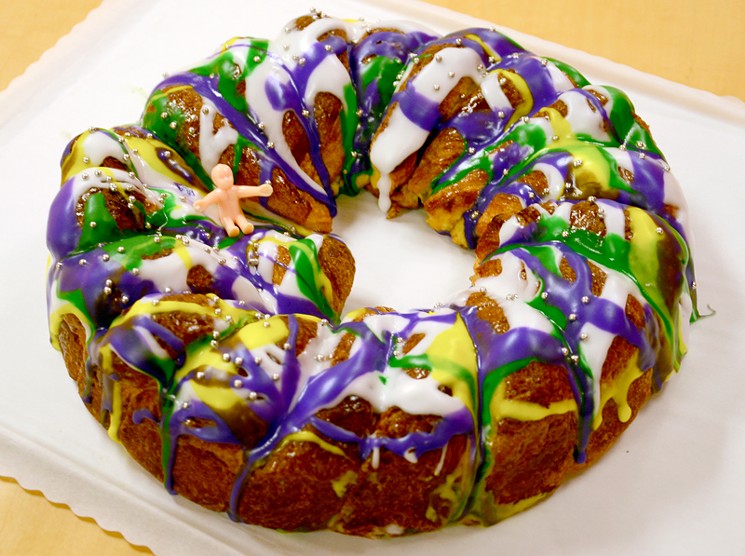 This baby awaits with open arms.
Photo by Matt Griesmyer

Located in Montrose, this old-school bakery has lots of charm. Framed pictures of owner Sandra Bubbert posing with myriad 1990s-era politicians and celebrities, from Barbara Bush to Reba, hang on the walls. She may be a baker to the stars, but you'll still find her overseeing the very mopping of the floors to manning the phone lines every morning at 9 a.m. It's a no-frills establishment that gets the job done. The hefty $32 king cake here delivers.

Bubbert tells the Press that the top secret recipe is passed down from her grandmother, who happened to be "a good little baker" in St. Martinville, Louisiana, home of the Acadians. In fact, many recipes at the bakery are passed down from her “mawmaw.” Bubbert herself is Acadian, as well as Texan. She has spent the last 50 years in Houston, 37 of those operating her unassuming bakery on West Alabama.

If you go for the traditional cinnamon variation here, you’ll find that the cake is almost croissant-like in its softness, with a healthy helping of purple, green and gold icing that's sweet but not overkill. "That's for the purists," Bubbert notes of her original king cake. But is she herself a purist?

"Well, you can't beat our cream cheese," she says, which you can try in the regular size or in the mini personal king cake size. "No bigger than a cow patty," she jokes, and available daily for $3.95/each.
Acadian Bakery will also double-fill larger king cakes as well, with flavors including one of Bubbert’s favorites, a housemade lemon curd. All king cakes, besides the minis, must be ordered at least a day in advance. 713-520-1484. Online at acadianbakers.com This bakery on Braeswood is a 68-year-old institution, known for its incredible gingerbread men, brownies and for having some of the best pecan pie in the entire South, not to mention that three layer pie within a cake bonanza, the ‘Pumpecapple’ pie cake, which went viral a few years ago. But the king cake here, fifth-generation baker Bobby Jucker tells the Press, has gone through a major transformation in recent years.

That’s because of a trip Jucker took to New Orleans about three years ago to see how some of the best king cake bakeries, including Gambino’s, Haydel’s, Manny Randazzo’s and Paul’s Pastry (a Mississippi bakery that turns out a whopping 140,000 a season), get the job done during busy Carnival season.

“It changed everything,” he says.

Jucker went home with a new plan for producing a very classic New Orleans-style king cake: a simple oval ring, not braided or overly fussy like his previous version, but one packed with cinnamon and (if you want) stuffed with fillings. A schmear of cream cheese is particularly pleasing, making the cake extra-dense but not at all messy. Traditional white icing and a dusting of colorful sugar come on top of all the Mardi Gras-themed king cakes here, which sit among the best I’ve ever tried in New Orleans, and are reasonably priced too at just $20. The packaging and lagniappe beads and mask that accompany these cakes will put a smile on any Nola expat’s face.

This Mardi Gras season, Three Brothers is on track to sell a whopping 5,000 king cakes, perhaps a sign that Jucker is on to something. Despite the bakery’s status as a Houston icon, Jucker emphasizes that he doesn’t like Three Brothers to remain stagnant, but wants to continue to grow, creatively and maybe even expansion-wise. A fourth location might be in the works at an undisclosed location.

For now, you can pick up a king cake at all three of the bakery's locations. Regular-sized king cakes are stocked for walk-in customers, and larger ones are available by pre-ordering. The bakery also does holiday king cakes, including a football-themed rendition and two Valentine’s Day versions (one comes with a pair of plastic handcuffs that one might assume do not, in fact, symbolize the baby Jesus).

The Boil House stocks king cakes from Gambino's, a New Orleans bakery famous for being the birthplace of Doberge Cake, though it's also home to one of The Big Easy's most beloved king cakes as well. These things apparently go fast, like real fast, so you need to reserve one at 713-904-0241.

If you're looking to ship in from Cajun Country, Rickey Meche's Donut King has one of the best king cakes of all time, a giant doughnut-based cake that comes stuffed with an array of flavors. The bakery also offers double-filled king cakes, and the combo of chocolate and Bavarian cream is no fail. The cakes are glazed in the colors of Carnival, accompanied by their own serving knife. The $35 price tag, however, is accompanied by a staggering shipping fee. The preferred overnight is $39 and change, making this a pricey cake that's definitely still worth it for diehards.

For a cheaper shipping option that's a Carnival favorite in Louisiana, Haydel's ships its king cakes for $46 (next-day air shipping fee included) or $51 for stuffed versions.