The "Butter Bun" at Flying Pho. Photo by Kate McLean
They’re called “Butter Buns” and everyone needs to try them. Dead serious, it’s possible Christopher Huang, owner of Flying Pho and Ninja Ramen, has invented the next “aha” baked good— making the cronut begin to look a little bit like Mariah Carey.

Beginning from the beginning; think of Butter Buns as a WWE body-slam on “Rotiboy” buns which are a Malaysian twist on Conchas which are a Mexican sweet bread with a baked-on sugar crust sliced to look like a seashell (hence the name.) In comparison to Conchas, Rotiboy buns are less dense inside, more buttery, and in place of a sugar crust is a thin layer of slightly sweet, coffee scented cookie. Not bad, not bad.

Enter our hero, years ago, as he steps off the subway in Taiwan, instantly seduced by the waft of a baked aroma. “It was like Looney Tunes, I had to follow my nose.” A few turns through the tunnel led him to a "Bakers Boy" cart and one was all it took.

Using the Rotiboy model, Huang has expanded on the goodness by inserting a block of salted butter in the middle. As the bun bakes, the hunk of butter slowly melts into fluffy bread walls. Forking into the final product reveals a just-melted pool of salted butter, the perfect complement to a warm, yeasty interior and crisp, coffee-sweet exterior. Because Butter Buns aren’t overly sweet, Huang says it's especially tasty when paired with coffee.

Next item on the agenda: “Chicken Nuggies.” The Chicken Nuggies are made from dark meat: respect. Then marinated for two days in fish sauce: whoa, more respect. And finally, double battered with a little vodka in the second bath: level: magician. Huang says the vodka helps keep the crust light and airy, and because these nuggies are savory to the core, they turn into quite the addicting snack served alongside the “Better Than Cane’s Sauce Sauce.” In one bite it’s as if Cane’s has been playing an acoustic set this whole time.

“One day I came up with a bunch of pho puns that I wanted to inflict upon the public, [naturally] I had to start a pho restaurant so I could use them,” Huang says matter-of-factly on how the idea for his second venture began. Like hunting for Easter eggs, subtle hilarity can be found throughout Flying Pho's menu and website, and Ninja Ramen is no different.

Traditional Pho looks like a steaming bowl of well-tended beef broth, wide rice noodles, slices of tenderloin and green and white onions. That’s it. That's all. Oh, and the “Magical Beef Butter;” a homemade chili paste made of whipped beef fat skimmings from the pho broth. What many chefs would consider trash, Huang has turned into a tasty treasure—no need for the water hose of Sriracha. Devoid of South Vietnamese trappings like bean sprouts, basil, and hoisin this OG Northern take is beautiful in its simplicity. “In the North, they care about the broth more,” explains Huang who is also a history major.

Located in the Oak Forest/ Garden Oaks neighborhood, Flying Pho is BYOB with an alcohol license on the way, and pretty much the pho king spot.

Flying Pho
3434 Ella
Flying Pho is open until midnight every night of the week.
flyingpho.com 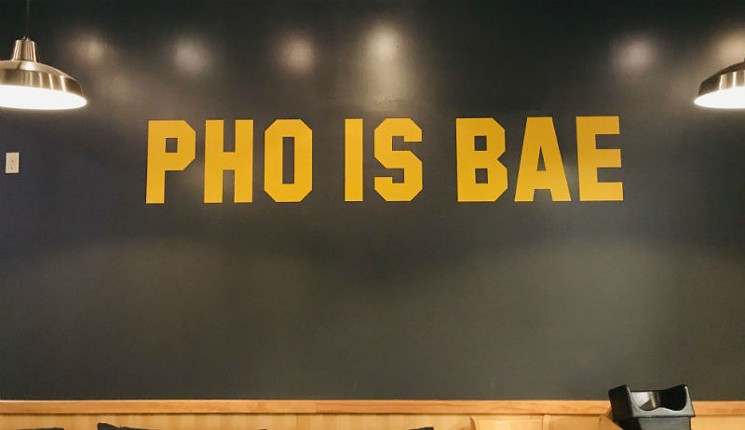 Can you spot the pun?
Photo by Kate McLean
KEEP THE HOUSTON PRESS FREE... Since we started the Houston Press, it has been defined as the free, independent voice of Houston, and we'd like to keep it that way. With local media under siege, it's more important than ever for us to rally support behind funding our local journalism. You can help by participating in our "I Support" program, allowing us to keep offering readers access to our incisive coverage of local news, food and culture with no paywalls.
Make a one-time donation today for as little as $1.