The four-episode first season dedicated an episode a-piece to the four major urban centers of Texas: Houston, Dallas, Austin and San Antonio. In each episode, host Kelsey Pribilski pairs up with a local culinary savant to sample some of the finest que' joints and hidden treasures in each city.

The show's Houston episode sees Pribilski spend a weekend with local food king Chris Shepherd as he takes the Texan native to Gatlin's BBQ, Feges BBQ and Korean Garden among others. In true Chris Shepherd fashion, the episode is a celebration of both Houston's classic barbecue pedigree and the city's diverse culinary landscape; one which offer diners the unique opportunity to enjoy barbecue styles from around the world.

The show's executive producer, Rachel Chou, recently spoke with the Houston Press about BBQuest Season One, its subsequent pick up by Hulu, and plans for the second season, which is currently in pre-production. 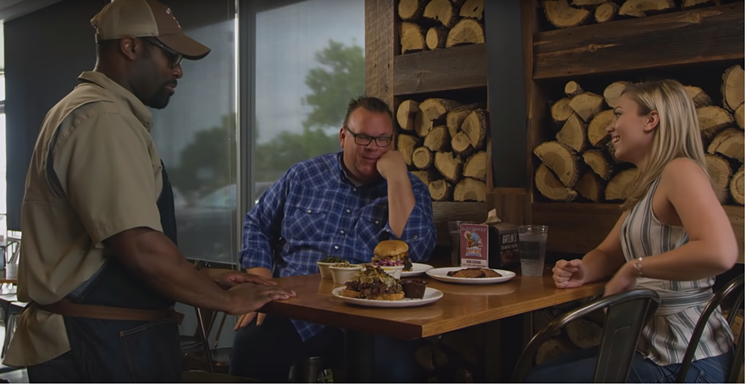 From left to right: Greg Gatlin of Gatlin's BBQ, Chris Shepherd, and Kelsey Pribilski
YouTube Screenshot
"[Shepherd] did a great job of helping us understand the elevated barbecue scene in Houston, and how food really shapes the culture of Houston," says Chou, who goes on to say that each episode tries to do the same for its respective host city.

While Season One showcased the diversity of cultures within each of Texas' major urban centers, Season Two will instead take viewers on road trips of more rural regions of the state, exploring the barbecue scene of small towns from Marfa to the Hill Country, down to the Rio Grande Valley.

"What we found is that we're really impressed with the cultural diversity of the different regions of Texas," says Chou. The show's expanded second season aims to shine a perhaps unfamiliar light on Texas' more isolated small towns, painting them as culturally vibrant culinary innovators. As with the first season, each episode will pair Pribilski with a cultivator or connoisseur of the region's barbecue culture.

None are likely to receive greater viewership than the forthcoming West Texas episode, on which Texas Monthly's barbecue editor Daniel Vaughn will play co-host opposite Pribilski. As Chou tells it, Vaughn will provide his uniquely knowledgeable insight on what makes West Texas so special in terms of barbecue — a story likely to be repeated in the Rio Grande Valley episode, as the show explores the influences of Mexican cuisine on South Texas barbecue.

The entire project has been a first for Chou, Senior Manager of Communications for Beef Loving Texans, who previously had no experience in television, let alone as a show runner. Despite this, with the pace, tone and finished quality of a much larger production, its easy to see why Hulu picked up the short running first season for streaming in the United States.

While we have no word yet as to whether Season Two will stream on Hulu, for now the company plans to release it on their website in October. Though, if it turns out as well made and entertaining as the first four episodes, we wouldn't be surprised.
KEEP THE HOUSTON PRESS FREE... Since we started the Houston Press, it has been defined as the free, independent voice of Houston, and we'd like to keep it that way. With local media under siege, it's more important than ever for us to rally support behind funding our local journalism. You can help by participating in our "I Support" program, allowing us to keep offering readers access to our incisive coverage of local news, food and culture with no paywalls.
Make a one-time donation today for as little as $1.