Inside the Glass: Nate Rose 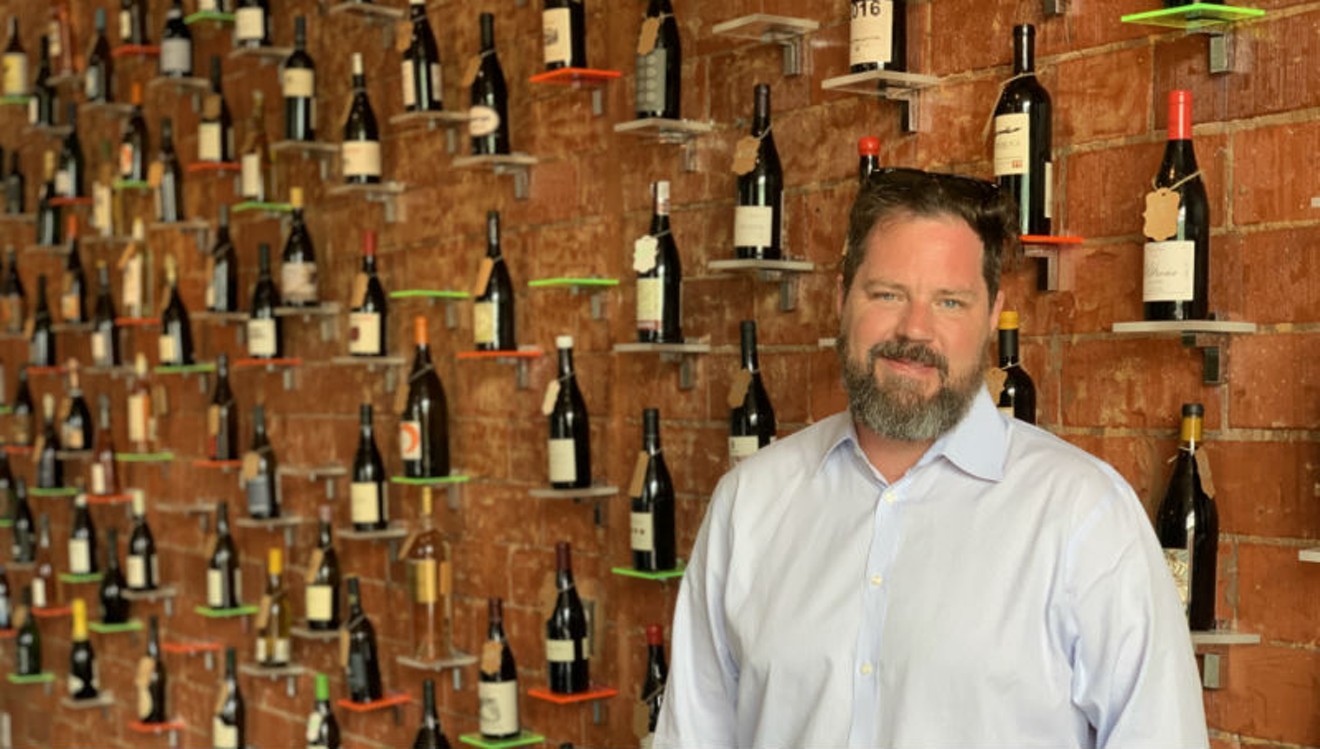 Houston can count on Nate Rose to keep the selection fresh. Photo by Kate McLean
In the service industry, wine buyers are considered especially talented. In Houston, those responsible are members of an elite squad. For them, two things are pretty much certain; a career in this field began with one memorable sip, and second, they probably rush home in between lunch and dinner service to feed some sort of pet, or little human. These are their stories.

Wu-Tang Clan vibrated onto the 200 block of Westheimer past the large, windowed door of Avondale Food & Wine; it was a beautiful day to pick up a bottle. Walking over rectangle-cut marble past modish wall patterns further revealed a wine shop unique in both design and inventory.  Bottles necklaced with handwritten price tags stood at attention on pedestals checkered throughout an entire brick wall. All part of an eclectic cache cultivated by wine director and consultant Nate Rose, who has long had his finger on the pulse of natural, biodynamic and in general, hard-to-obtain wines.

“Penner-Ash 1999 Pinot Noir, it was a tasting I stumbled upon at a Perry’s in Sugar Land, Ron Penner-Ash, the winemaker, was there.” It took a half second for Rose to recall both the moment and the wine that jump-started his career. He peeled an orange carefully, placing the segments on a kitchen towel that rested on a rose-gold, octagonal coffee table.

In 2001, grapes like cabernet sauvignon and chardonnay were being amplified by American winemakers into bigger, bolder expressions, further distinguishing a gap between the styles of old world and new world. “Penner-Ash was really the first to make powerful, juicy pinot noirs, quite the opposite of Burgundy,” he explains.

At the time these wines were a side project by Rex Hill Vineyards winemaker Lynn Penner-Ash, and her husband Ron, a school teacher. Almost 20 years later, the Penner-Ash winery is highly regarded and pulls fruit from 13 different vineyards throughout the Willamette Valley in Oregon, most of them touching well established American Viticultural Areas like Dundee Hills and Eola-Amity Hills.

“I walked into Spec’s the very next day and took a job making $7 an hour, 11 years later I was pulling million-dollar triggers,” Rose says.

Million-dollar triggers refers to his position as allocation specialist for Burgundy, Bordeaux and California, a fine wine program he helped introduce at the insistence of Spec's owner, John Rydman. In 2008, during the Great Recession, the wine market bottomed out, effectively giving Rose a leg up in the market as he snatched up cases ordinarily only available to distribution channels circulating throughout New York City.

However, in order to maintain the integrity of these particular producers, a lot of those wines would never see a shelf space. Instead, he privately brokered them to clientele, a move that would strengthen his reputation among top producers as a friend of the brand.

In 2014, Rose left Spec’s and has spent the past four years consulting as well as introducing more than 300 wines, like The Scholium Project, to the Texas market. “Avondale is an opportunity to sell these wines retail that don’t have another outlet in Houston—I’m looking to upset the market and change how people look at wine and wine communities, but really just make sure to take care of the guest.”

Oh, and he has a four-year-old chihuahua named Steve.

Avondale Food & Wine is open Tuesday through Sunday starting at 11 a.m. A wine shop open on a Sunday? That’s good to know. Also, beginning this week, Thursday through Saturday they will extend dining hours until midnight. Pick out a bottle, stay, enjoy a bite to eat, à vous de voir.