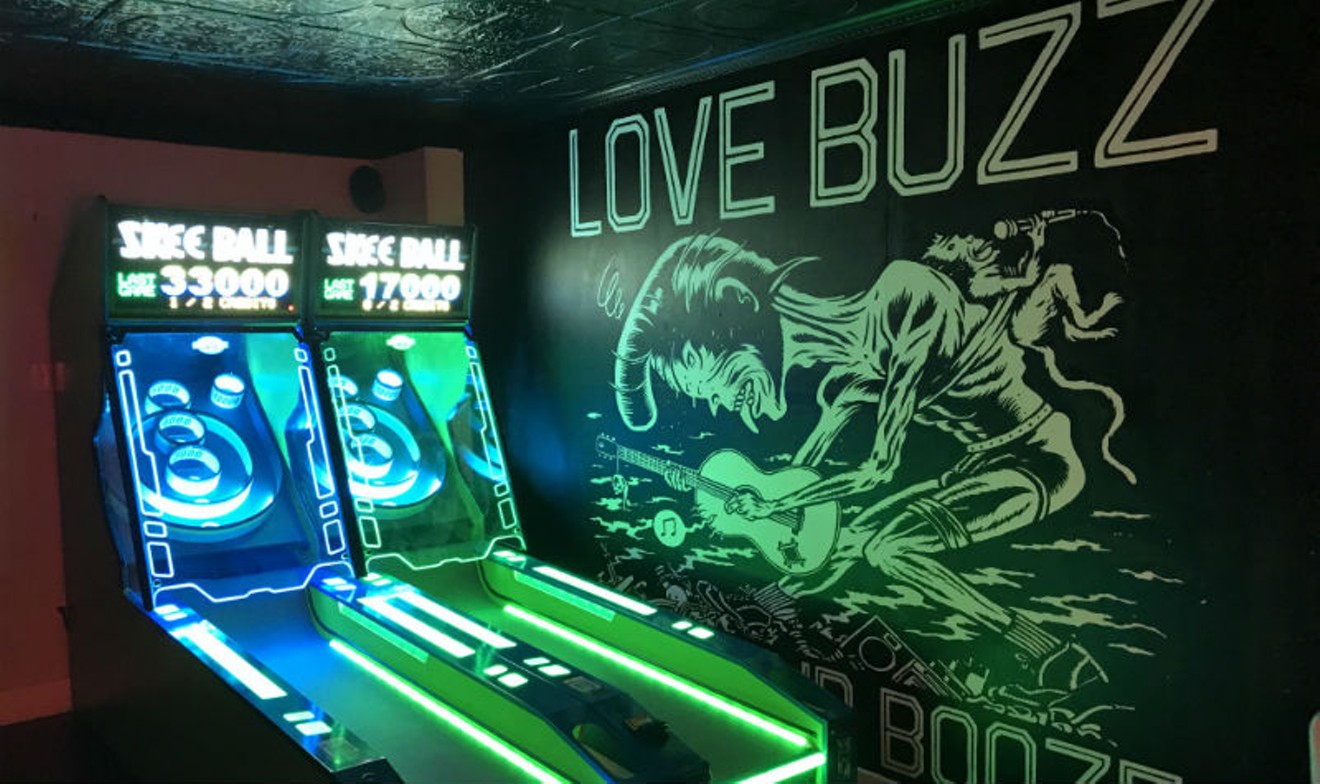 Photo by Kate McLean
Condoms, rolling papers, cigarettes, an iPhone charger, Big League Chew—it’s two in the morning, what more could you need? “Like a bodega in a box,” Sam English, owner of Love Buzz Pizza Pub, says of his thoughtfully curated vending machine. They even carry the big nose, mustache, eye-glass disguise sets, which definitely comes in handy after the hour-or-so trial period with the guy you met at Avant Garden across the street.

It is convenient to pop over for a slice, past the “clever girl” velociraptor from Jurassic Park and up the stairs into the now tinted, neon luminescent 1930s hotel turned pizza pub. Kurt Cobain groans, Naughty by Nature rhymes, and random Air Hockey scores clip familiarly in the distance.

Nothing says Montrose more than a dim joint serving pizza till two in the morning. Their pies come in two sizes; 12-inch and 16-inch. And FYI, really hungry individuals can knock out a 12-inch, by themselves, easy.

One of their best sellers, the 3 in Da’ Mornin, is topped with caramelized onions, goat cheese, and Texas honey, with just enough fresh tomato sauce underneath. The dough is thin crunchy, which manages to fill you up without sitting inside your belly like, “Hi.”

“You can taste the toppings more on the thin crust—I like that,” says David McLean. A valid opinion—this kid’s been crushing pizza for 26 years.

The Kona Gold special was an ideal twist on the Hawaiian. Pineapple, jalapeño, pepperoni—that’s right, Canadian bacon, the president of mysterious ham products, gets the boot. I’m not going to make the correlation though we’re all thinking it sounds distantly familiar. The MF Shrooms; mushrooms, herbed ricotta, roasted garlic.  Pretty much date night party of one, yay.

The Wake and Bake pizza is definitely next on the list; bacon, cheddar, green onions, crispy hashbrowns, sunny-side up eggs; but crispy hashbrowns was really all they had to say. D.I.Y Pies are just that with a selection of “Dank” and “Extra Dank” toppings to choose from. 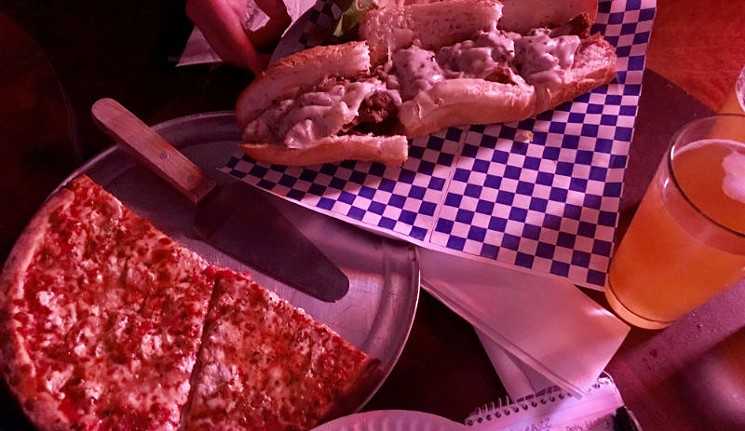 Take me back.
Photo by Kate McLean

Need more bread? Try a big ‘ole hoagie in the “Sammiches” section. The bun is soft on the inside, crisp on the outside and stuffed with thinly sliced steak (Trilladelphia Cheezsteak, ask for extra wiz), or meatballs (Meatball Deluxe), or a “plethora of ham, salami, mortadella, gabagool,” (the Notorious P.I.G.). Gabagool is Jersey speak for Capicola, by the way.

Shout out to my vegetarians, they totally have Caesar salad—oh my bad, that has anchovy in the dressing. They totally have the House Salad. Cheesey Bread too. The “Sugar” section embraces the do a few and do ‘em well mentality with Ice Cream Floats and Cannoli.

Pizza’s best mate? Beer on tap includes: a stout, an IPA, a pilsner, a delicious little Pineapple Apple cider, while stashed in the cooler are Montucky Cold Snack tall boys, Lone Star, and Session among others. They have a full bar too, and on that note, happy hour is definitely something to take advantage of. On Wednesdays from 9 p.m. to 1 a.m. they’ll give you a free slice with any cocktail.

“We’re just a bar that serves really good pizza. We just want to be that,” English reiterates.

Love Buzz Pizza Pub
412 Westheimer
The kitchen is open until 2 a.m. every night.
713-521-2899
lovebuzzpizza.com
KEEP THE HOUSTON PRESS FREE... Since we started the Houston Press, it has been defined as the free, independent voice of Houston, and we'd like to keep it that way. With local media under siege, it's more important than ever for us to rally support behind funding our local journalism. You can help by participating in our "I Support" program, allowing us to keep offering readers access to our incisive coverage of local news, food and culture with no paywalls.
Make a one-time donation today for as little as $1.