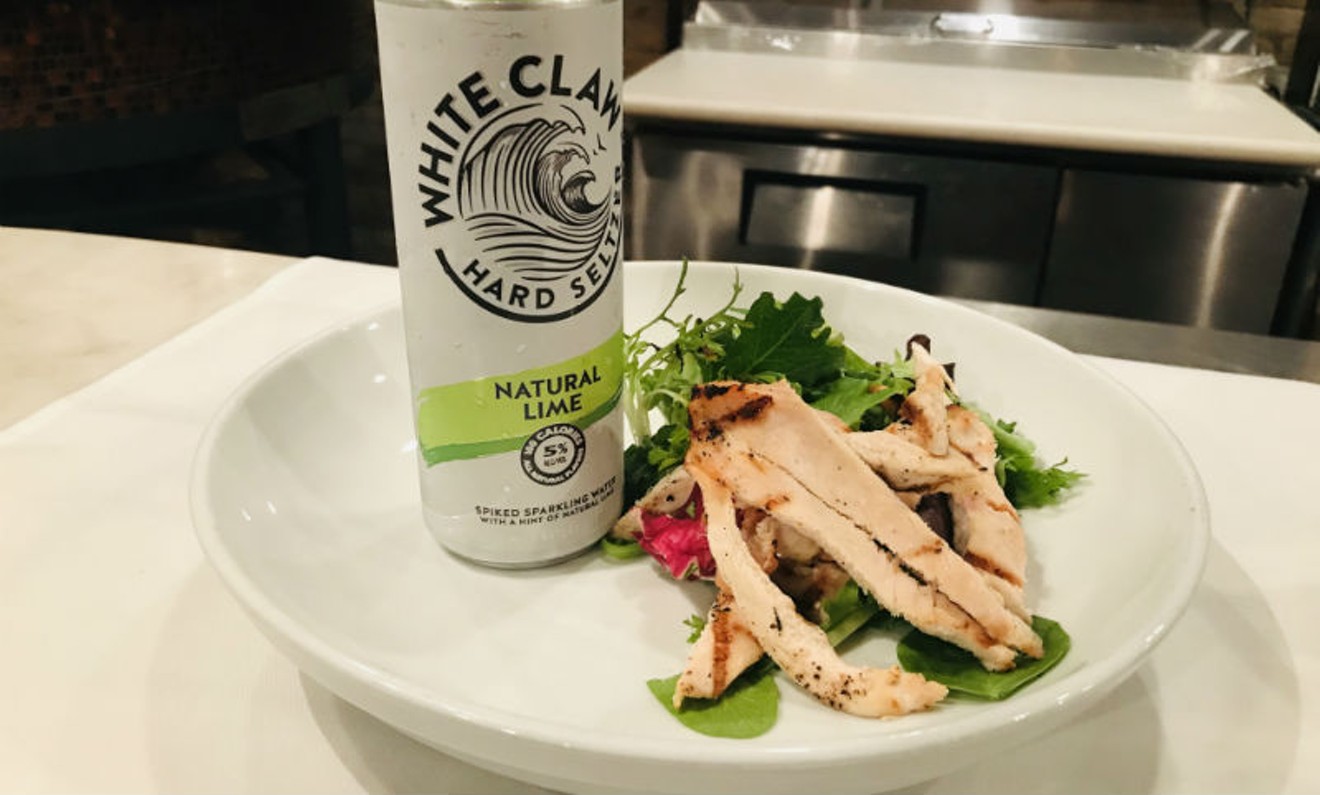 Nothing to see here, just enjoying a salad. Photo by Kate McLean
What do a protein shake, mixed green salad with chicken breast, and ground buffalo taco bowl have in common?

They’re all digesting in a human body that’s about to crush a six-pack of White Claw Hard Seltzer because it’s Friday.

Hard seltzer sales are going absolutely bonkers right now in the beer category. More apt to be sold at a music festival than a bar, hard seltzer is marketed to those seeking healthier lifestyles and guess what—it’s totally working. According to the 2018 study "Top-Growing Beer Category" by Nielsen CGA, beer sales were a little bit down while hard seltzer— a lot bit up, 165 percent to be exact.  As alluded to by the article "A Sparkling Success — Why Hard Seltzer is a $500 Million Category Worth Watching," the bulk of sales are happening between Memorial and Labor Day.

Billed as “the purest hard seltzer in the world,” White Claw clocks in at around five percent ABV, which is the same as a bottle of Heineken less 40 calories. According to WebMD, that caloric intake is equivalent to "half a medium-sized baked potato with salsa."  Pretty sure nobody eats baked potatoes like that, but okay. White Claw is gluten free with only two grams of sugar and comes in six different flavors; Black Cherry, Mango, Natural Lime, Pure Seltzer, Raspberry, and Ruby Grapefruit. To be fair, this party beverage is pretty crushable and thankfully doesn’t taste like a packet of Crystal Light hard shook into a Perrier bottle.

The Natural Lime interpretation is reminiscent of a vodka soda except in place of Tito’s exists a faint malt characteristic. The alcohol in White Claw is produced from fermented sugar and uses the trademarked “Brew Pure Technology;” an entirely vague process. Little to nothing can be found on the inner workings though it may be deducted from this ingredient- “alcohol from cold-brewed sugar”- it’s a process similar to cold-brew. Mysterious, yes, but not alarming as say, checking the back of a can of Cheez Whiz.

At Spec’s Midtown and in grocery stores, a pack of White Claw Hard Seltzer costs around the same as a sixer of craft beer, $9— except it looks and feels...healthier.
KEEP THE HOUSTON PRESS FREE... Since we started the Houston Press, it has been defined as the free, independent voice of Houston, and we'd like to keep it that way. With local media under siege, it's more important than ever for us to rally support behind funding our local journalism. You can help by participating in our "I Support" program, allowing us to keep offering readers access to our incisive coverage of local news, food and culture with no paywalls.
Make a one-time donation today for as little as $1.