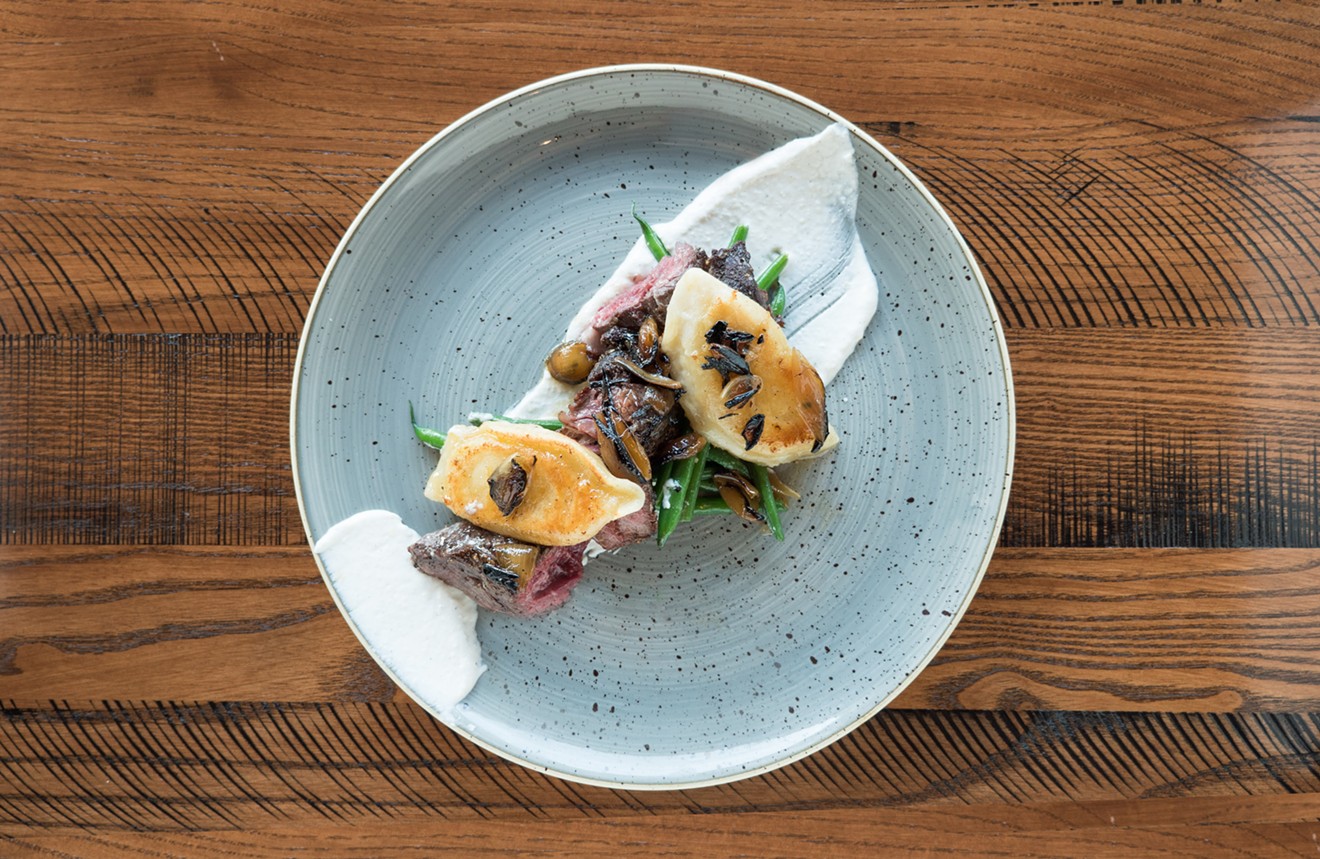 Riel's signature dish hanger steak and peirogis Photo by Bradford Eu
Houston culinary darling Riel, the Gulf Coast concept opened by chef Ryan Lachaine in 2017 is celebrating its two year anniversary on Tuesday January 22. To celebrate, Lachaine and Co. will offer a special $2 happy hour featuring both drinks and bites from 5 to 6:30 pm. The kitchen will also welcome former Sous Chef EJ Miller, now Executive Chef at International Smoke, as a guest chef for the night.

The much lauded Montrose kitchen is Lachaine's first ownership venture following years of teeth cutting in some impressive settings. The French-Canadian with Ukrainian heritage attended the Arts Institute of Houston and went on to cook at Gravitas, Stella Sola, Reef, and Underbelly — where he was named one of Eater's "Young Guns" of 2013. He followed that up with a U.S. tour, making stops at Charleston's acclaimed Husk and San Francisco's COI among others. With Riel he brought those collective experiences together to create a menu of what he calls, "globally inspired Gulf Coast cuisine."

On Tuesday, Lachaine will be joined in the kitchen once again by his friend Miller. Miller, a graduate of LeNorte, worked all over Houston before his year-long stint at Riel and current position at International Smoke. "He was a huge part of the opening of Riel," says Lachaine who is excited to welcome his Sous Chef back into the kitchen if only for one night.

Both chefs will prepare a one-time a la carte menu for Tuesday night which will feature some apparent "greatest hits" from Riel's past menus. Highlights will include Yellow Edge Group Crudo, Pork Tonkatsu Torine, and Head-On Gulf Shrimp.

The $2 Happy Hour will include smaller portions of Riel's bar bites like mini hot dogs and gator karaage, as well as select $2 wines and 8th Wonder beer.

Like so many other restaurants in Houston, the two year mark was no easy feat for Riel which was only eight months into its existence when Hurricane Harvey threw the entire industry a serious curve ball. But Lachaine believes the modern American kitchen found its "identity as a restaurant" in the year and half since the storm.

Anniversary festivities are set to start at 5 p.m. on Tuesday January 22 and will continue until closing at 10 pm. $2 happy hour ends at 6:30 pm. For more information, call 832-831-9109 or visit rielhtx.com.
KEEP THE HOUSTON PRESS FREE... Since we started the Houston Press, it has been defined as the free, independent voice of Houston, and we'd like to keep it that way. With local media under siege, it's more important than ever for us to rally support behind funding our local journalism. You can help by participating in our "I Support" program, allowing us to keep offering readers access to our incisive coverage of local news, food and culture with no paywalls.
Make a one-time donation today for as little as $1.