The Crazy Burger is crazy good. Photo by Thomas Nguyen 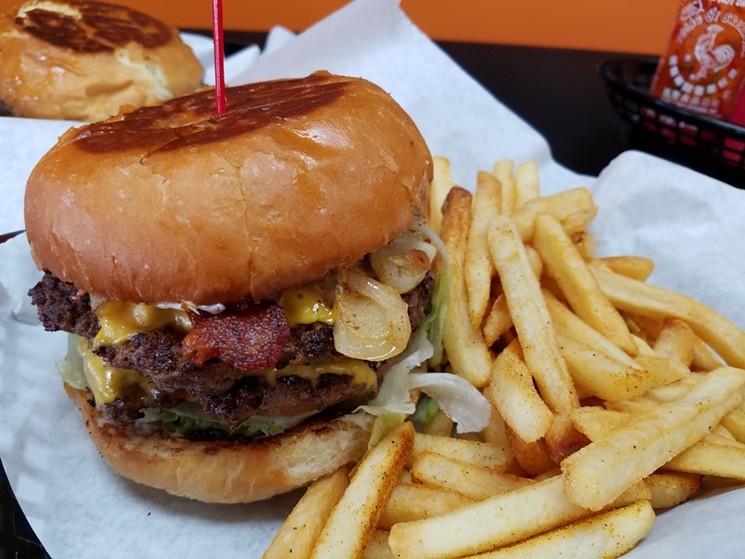 The Crazy Burger is crazy good.
Photo by Thomas Nguyen

Joy Love Burgers, 13150 FM 529 opened October 26. This is the fourth location for the family-owned small burger chain and a drive down Barker-Cypress near Highway 290 shows an upcoming fifth location. I know this, because my son and I excitedly drove into the strip center to find it still a work in progress, so no joy or love for us that day. The restaurant sells, pork chop sandwiches, wraps, quesadillas, Cajun wings and more. However, it's the burgers in its name that get most of the feels.

Chef and owner Joon Jeon is a former baker and the buns for the juicy burgers are made in house. The beef is one-hundred percent certified Angus. There are several variations, including the Joy Love Burger, a beef burger topped with a grilled chicken tender, grilled onions, and avocado. Or go for The Crazy Burger, a double meat, double cheese monster with bacon, grilled onions and Thousand Island dressing. Check out Thomas Nguyen's review here in the Houston Press.

The Barker-Cypress store is coming soon.
Photo by Lorretta Ruggiero
The FM 529 location has a patio with picnic table seating. Unfortunately, there is no cold beer to accompany the juicy burgers, but you can console yourself with a choice of string, waffle or curly fries. The restaurant is closed on Sundays.

The daiquiris have names like Thug Passion and Coral Reefa and can be bought by the gallon. Besides seafood boils, there are fried dishes as well and add-ons like Cajun rice, french fries and sweet corn.  There's a lot of hype surrounding the new restaurant and the prices are on the higher side, but patrons are loving the seafood, frozen drinks and party atmosphere. 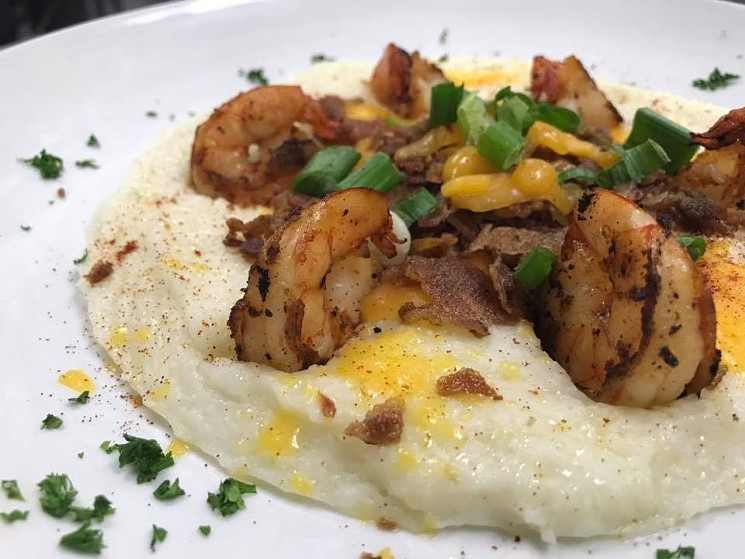 
K.auRa's Kitchen, 18311 Clay, opened October 12. Co-owner Kenneth Raymond came to Houston from St. Louis about three years ago and he has brought St. Louis style-pizza with him which is cooked in a wood-burning oven. Raymond explains that he uses a processed cheese blend called Provel, which is a mix of provolone, Swiss and white cheddar and a little liquid smoke which gives it the distinctive St. Louis flavor. It is served on a thin, crispy crust and cut into squares. The restaurant offers a full bar with a reverse happy hour, Wednesday through Friday from 7 p.m. to 9 p.m. and a Saturday happy hour from 5 p.m. to 7 p.m.

It's not the mouth of Hell. It's a wood-burning oven.
Photo courtesy of K.auRa's Kitchen
Raymond told the Houston Press that he has designed a menu that is creative and unique. He wants his customers to say that they have never tasted anything like it. He also says that besides the food, his focus is on great customer service.

There is an outdoor patio, plus a small stage in the restaurant where future karaoke nights and other events are planned. Yummie, yummie, yummie, I got tapioca balls in my tummy.
Photo by Lorretta Ruggiero
Yummie Street Food, 10211 Cypresswood, opened November 18. It's the second location for the family-owned boba tea shop. The first one is located at 3645 Cypress Creek Parkway. It has the usual drinks one expects to find such as bubble tea, milk teas and smoothies. There are slushies and fresh fruit juices also.

On the street food side, there are several variations of banh mi, including bulgogi, charbroiled pork and tofu.For snacks, customers can try popcorn chicken: plain, spicy or served in Yummie sauce. Korean wings, spring rolls and fried calamari are also available. Sip and snack at Yummie Street Food.
Photo by Lorretta Ruggiero
The service is friendly, but as with most small boba tea shops, the food and drinks can take a while. Yummie offers online ordering for those who need instant gratification as they walk in the door.

Vegan Donuts and Gelato 16618 Clay, opened in the Bear Creek Area. Besides vegan donuts and cupcakes, the shop sells sausage rolls made with vegan sausage. There are egg rolls and fried rice for folks looking for something savory.

La Corona Mexican Restaurant, 106 Vintage Park Boulevard, opened October 21 in the Vintage Park complex. Besides a menu of Mexican favorites like tacos, burritos and fajitas, there are steaks and seafood, too. If you are looking to stay warm this winter and stave off a cold, there is caldo de pollo (chicken soup for those who somehow live in Texas and still haven't learned the tiniest bit of Spanish) and the restaurant recently began serving menudo.

There are lunch specials, a daily happy hour and the restaurant serves breakfast on Saturday and Sunday from 8 a.m. to 12 p.m.

It's never too cold for Margaritas.
Photo by Lorretta Ruggiero

Celaya's Mexican Restaurant, 34616 SH 249, opened its second location in Pinehurst, up north a piece from Houston. It's situated seemingly in the middle of nowhere as you drive up to Magnolia. A number of businesses have failed in the strange location, including a boat-shaped restaurant. However, the original Celaya's on Perry Road has been around a long time, so this may be the restaurant that finally succeeds.

If you are driving to or from the Renaissance Festival, it's an easy stop for fajitas or enchiladas. Since it can get a bit chilly at Ren Fest, you might want to stop in afterwards for a bowl of homemade caldo de res, a Mexican beef soup, to warm up your bits. Especially if you are wearing your wench costume.

Celaya's also has a breakfast buffet on Saturday and Sunday from 9 a.m. to 12:30 p.m. There is often live music on the weekends, so call ahead. I was there once when the guitarist and singer did a rendition of "Boys Don't Cry" by The Cure. Interesting, to say the least.

Cool jazz and hot Cajun cuisine awaits you at Le Chateau.
Photo courtesy of Le Chateau Bistro and Lounge
Le Chateau Bistro and Lounge, 1112 Southmore, launched its soft opening October 28 and is now open Friday and Saturday, from 5 p.m. to 2 a.m. The speakeasy vibe is mixed with a Cajun food menu and live entertainment. Friday night is usually live jazz and Saturday Night Live features a burlesque show beginning at 8 p.m. Entertainment will vary, so check its Facebook page or call ahead. The bistro offers a Sunday brunch from 11 a.m. to 4 p.m. featuring dishes like catfish and grits or Creole Alfredo.
KEEP THE HOUSTON PRESS FREE... Since we started the Houston Press, it has been defined as the free, independent voice of Houston, and we'd like to keep it that way. With local media under siege, it's more important than ever for us to rally support behind funding our local journalism. You can help by participating in our "I Support" program, allowing us to keep offering readers access to our incisive coverage of local news, food and culture with no paywalls.
Make a one-time donation today for as little as $1.