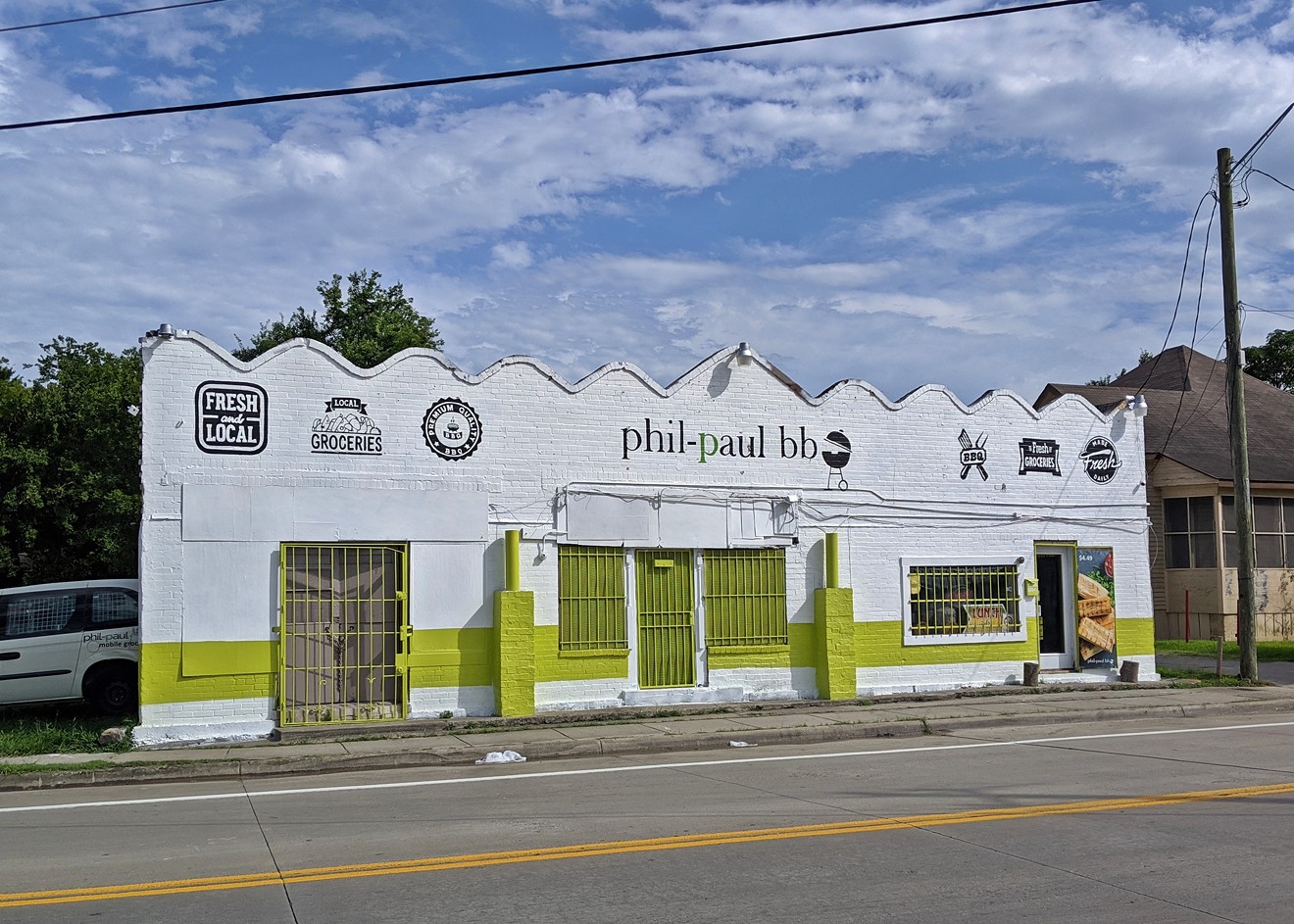 Phil-Paul BBQ at 3206 Lyons Ave. Photo by Carlos Brandon
Sometime in late 2018, a small, nondescript barbecue restaurant quietly opened on Lyons Avenue in Houston's historic Fifth Ward. The family-owned smokehouse opened with no press and little fanfare beyond a few public Facebook posts by its proprietor. Eight months later, people are slowly taking notice. Phil-Paul's BBQ at 3206 Lyons is easy to drive past but hard to miss. Its newly painted white and green exterior makes it one of the only renovated structures in a part of town that long ago fell into a state of perpetual disrepair. Like its neighboring Third Ward, Fifth Ward is a community caught between the vice grip of poverty and the encroaching reality of gentrification — with little hope of retaining its own identity and cultural charms. Proprietor Phillip Paul Bryant is, by all appearances, a proud Fifth Ward native. The former radio host and community organizer owns a book store a block from his recently opened restaurant; a shop called Phil-Paul's New and Used Books. A quick Google search revealed a 2012 lawsuit Bryant filed against the city of Houston for its controversial law against feeding the homeless.

Phil-Paul BBQ at 3206 Lyons Ave.
Photo by Carlos Brandon
The small restaurant is laid out in the style of a retro neighborhood grocer. Food-lined shelves cover the back wall, holding non-perishable essentials like condiments and bread, some dry snacks, flour and pasta among other goods. On the other side of the room a cashier takes food orders behind a counter. In between, the tiny dining room fits five tables. Parking is available in the grass lot next door, from where customers might spot a large black smoker and catch the wafting aroma of smoked meat. On smokehouse aesthetics, Phil-Paul BBQ scores an 8.5/10. It's been noted in this column that the African-American barbecue traditions of East-Texas and the gulf coast are not brisket-centric. The barbecue recipes handed down by southern black families focus on more easily obtained proteins like pork, chicken and turkey. Knowing as much, I expected little from the brisket in my two-meat platter. It was ordered as a matter of necessity, a box to be checked off as part of a weekly barbecue routine  And yet, the chopped beef was a pleasant surprise.

Pork Rib and Brisket from Phil-Paul BBQ on Lyons Ave.
Photo by Carlos Brandon
While not the fall apart moist delicacy of the Hill Country, Phil-Paul's brisket is quite tender, well seasoned and heavily marbled. With deep smoke penetration and crispy burnt ends, its a brisket we never expected to find tucked away in an undiscovered Fifth Ward smokehouse. On quality of brisket, Phil-Paul scores a 6.5/10.

If the brisket was above average, the pork ribs, handmade tamales, barbecue tacos, chopped beef sandwich and loaded baked potatoes are in a league of their own. Our platter came with pork ribs, though in their tenderness the ribs quickly turned to pulled pork on the tray. Bones were left floating near the bottom as though boiling in a broth. The house specialties are smoked tamales and smoked chicken spaghetti — two dishes as culturally opposed as caviar and corn dogs, yet strangely representative of Houston's melting pot culinary environment.

Soul Food Sundays are, reportedly, the best day to visit Phil-Paul, as its the only day of the week the neighborhood joint serves its specialty soul food menu complete with oxtails, chitterlings and whole smoked chickens. On quality of non-brisket proteins, Phil-Paul BBQ scores a 7/10.

Sides, in our limited experience, were mildly impressive. A heavily seasoned side of corn was well cooked and crunchy, while the mac & cheese could have been less congealed (though it packed a nice cheesy punch and still maintained an al dente pasta bite). More popular items, although sold out on this occasion, are the potato salad, and off-menu brisket rice. An apparent dessert favorite is the banana pudding. Doubling as a small grocery store, there's always the option to grab a bag of chips or candy bar off the shelf. On quality of sides, Phil-Paul BBQ scores a 6/10.

While this hole-in-the-wall neighborhood grocer has the smoked chops to merit mention in any discussion about Houston barbecue, it remains well under the radar of Houston foodie circles and food media. Its location in the Fifth Ward, a stone's throw from northeast downtown, puts it off the beaten path for affluent spenders and walk-in diners. What this local business needs is exposure, and greater foot traffic. As the neighborhood falls further from its post-war heights as a thriving black community, local businesses like Phil-Paul's breathe new life into the streets of Fifth Ward — so long as people know they're there.
KEEP THE HOUSTON PRESS FREE... Since we started the Houston Press, it has been defined as the free, independent voice of Houston, and we'd like to keep it that way. With local media under siege, it's more important than ever for us to rally support behind funding our local journalism. You can help by participating in our "I Support" program, allowing us to keep offering readers access to our incisive coverage of local news, food and culture with no paywalls.
Make a one-time donation today for as little as $1.