Tales From The Top Shelf: Genever 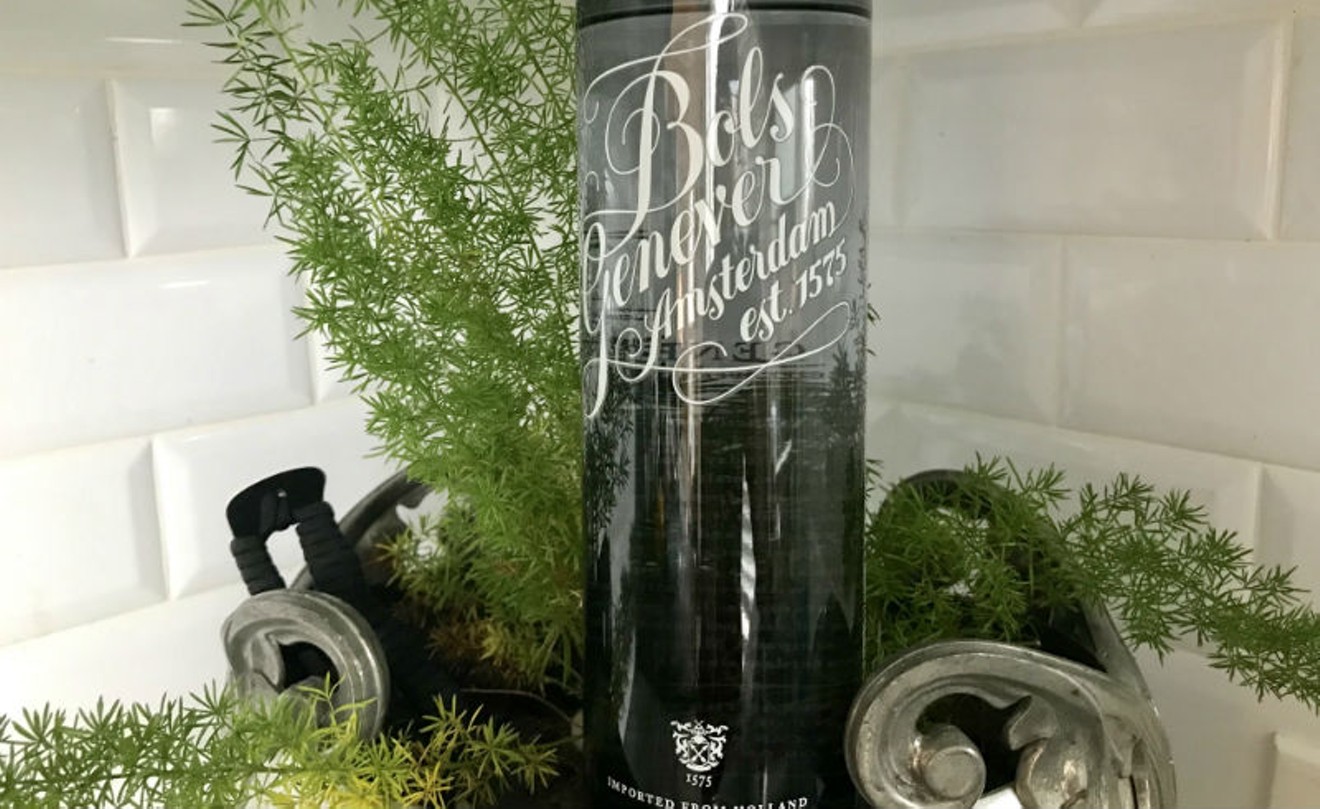 Plant like Genever. Plant want Genever to stay forever. Photo by Kate McLean
Smoke lazily escapes his mouth as he reaches down to casually check the silver watch attached to his vest. Flicking the thin cigar over and over again he leans long against the wall. He isn’t a hipster, he’s old fashioned and maybe he’s brooding because he’s all alone or maybe it’s because for hundreds of years people have called him Genever—which sounds a lot like Jennifer, but with a “v.” It’s true, there really isn't a spirit on the market quite like him.

Genever is old fashioned and dates back to the late 1500s when the Dutch began incorporating distillation into their booze-making. Since grains were aplenty, they were "malted" first, which resulted in “malt wine.” To "malt" a grain means to add water which fakes it into growing again (germination), and then stopping that growth with warm air. Just like accepting a shot from a gentleman, followed with, “okay, bye!” Any grain can be malted, but barley is kind of the best. Scotch, for example, is made from malted barley: that's growth is stopped by peat smoke.

Back to the story—it tasted like shit, and the Dutch knew it. In an effort to avoid throwing away alcohol, they distilled it once more, this time infusing juniper and other botanicals. “We’ll just call it medicine,” they said when still, it wasn’t palatable. Luckily for gin lovers today, the Dutch kept at it and as time wore on they became much more skilled and disciplined in the process. We all have to start somewhere.

In 1664, the Bols family, whose distillery had been in operation since 1575, came up with a pretty good recipe, and in 1820, Lucas Bols nailed it. In 2008, their distillery decided to reintroduce that 1820 recipe onto the market as Bols Genever Amsterdam 1575, and it's not bad. Not bad at all.

The easiest way to explain how Genever is made is with mathematics:


Half Malt Wine:
Malt Wine is a combination of malted grains; barley, corn, and rye is a winning combination because corn softens the intensity of rye and barley is where the magic happens.  That trio is then double, sometimes triple distilled.

Half Neutral spirit:
A grain or sugar (unmalted) that's distilled once with botanicals.  Juniper’s attendance is mandatory.


At first, the yeasty aroma of Genever is reminiscent of a Junmai Sake. Because, traditionally, Genever isn't aged, it's the perfect snapshot of what a pure malted grain tastes like. Juniper and other botanicals are present, but subtle. Genever is lovely served neat, on the rocks, or alongside beer— what the Dutch call a “Kopstootje.” Shot and a beer; did the Dutch invent the line cook special? Wow, thanks.

Because every craftsman with their hand on the wheel can’t help but ask, “what if we age some?” Now more distilleries are releasing aged additions, which contributes even more depth of flavor. Aging in wood also introduces tannins— essentially the “bite" of the sip.

As far as styles of Genever go; “Old” will contain more malt wine than “Young.” “Young” Genever came about because it was a little cheaper to make, and more neutral in taste. In 2008, the EU, along with The Netherlands established the official appellation for Genever to include The Netherlands, Belgium, parts of France and parts of Germany. Which has everyone wondering what Luxembourg did at the Christmas party.

On a chilly Houston night, Genever is a new and different experience worth trying. Here are a few places you can taste and buy Bols Genever around town:

Houston Wine Merchant, 2646 S Shepherd, sells Bols “Barrel Aged” edition at around $50 a bottle. This Genever has been aged 18 months in Limousin oak.

So how was Gin born of Genever? Somewhere during some war, English soldiers fell in love with the drink, took it home, and tried to knock off the recipe. (No surprises there.)  What they came up with was Old Tom Gin, which had more pronounced botanicals and a lesser percentage of malt wine. As tastes developed, Old Tom Gin gave way to more drier versions resulting in the popular London Dry Gin, which is what we drink today.

Since Bols' revival of Genever in 2008, the spirit has quietly taken its place on the shelves of craft cocktail bars again.  The Houston Press reached out to Brian Prewitt, master distiller for A. Smith Bowman distillery, on the resurgence of the spirit and its future.

“I think spirit aficionados may explore Genever more in the future but I don’t know if it will really ever take off in any major sense— I hope that I am wrong. It would be great to see an old world style come back to the forefront for mixologists and consumers alike. I do however, think that the Old Tom style of gins could potentially have a greater following in the future– they seem a bit more approachable to most consumers than some of the Genevers and seem to bridge the gap between the older world origins and newer experimentation of gins in the market today.”
KEEP THE HOUSTON PRESS FREE... Since we started the Houston Press, it has been defined as the free, independent voice of Houston, and we'd like to keep it that way. With local media under siege, it's more important than ever for us to rally support behind funding our local journalism. You can help by participating in our "I Support" program, allowing us to keep offering readers access to our incisive coverage of local news, food and culture with no paywalls.
Make a one-time donation today for as little as $1.