Lift your holiday spirits with these spirits. Photo by Dylan McEwan


Mark your calendars because you don't want to miss these deliciously fun culinary happenings:

Chef Dawn Burrell is reuniting with her former Top Chef competitors for a good cause.
Photo by Jenn Duncan
Chef Dawn Burrell's highly anticipated restaurant, Late August, isn't open yet but the James Beard Award-nominated chef and Top Chef Season 18 finalist is giving Houstonians the opportunity to preview what is to come at the new restaurant. Burrell will have a series of culinary events as part of Lucille's Hospitality Group's "The Twelve Days of Christmas".  Along with a sneak peek into Late August's cuisine, Burrell will also be bringing in fellow competitors from Top Chef Portland to co-host the dinners. Late August is expected to open in spring 2022 at The Ion.

The dinner series kicks off Monday, December 13 at 713 Music Hall at POST Houston, 401 Franklin. Burrell will host the Intimate Dinner event with Shota Nakajima, one of her fellow finalists, for a one-night-only event that will raise money for Lucille's 1913, the non-profit from chef and restaurateur Chris Williams which serves some of Houston's most under-resourced and food insecure neighborhoods. Some of its efforts include delivering meals to seniors in need.

The event opens at 7 p.m. with a cocktail hour presented by Remy Martin and is followed by a coursed dinner service and wine pairings. The cost is $300 and includes entry to "The 12 days of Christmas Virtual Cooking Class" December 12 with Chris Williams and Dawn Burrell.

A second Intimate Dinner will be held Friday, December 17 at The Vault at The Corinthian, 202 Fannin, with chefs Dawn Burrell, Sasha Grumman, Maria Mazon and Jamie Tran. The dinner reunites Burrell with some of the women of Top Chef Season 18  and will benefit I'll Have What She's Having, a non-profit that supports healthcare for women in the restaurant industry and reproductive rights.

The event is $350 and includes the opening cocktail hour, sponsored by Botanist Gin + Cointreau, a multi-coursed dinner with wine and entry to the private after party with the chefs. It also includes the virtual cooking class December 12. For the after-party only, 9:30 p.m. to 11:30 p.m., the cost is $75 and includes cocktails and light bites.

Lucille's Hospitality Group will also hold a Holiday Party December 19 at The Ion, 4201 Main, from 5 p.m. to 8 p.m. A non-profit donation is required for entry.

Tickets for "The 12 days of Christmas" can be purchased here. 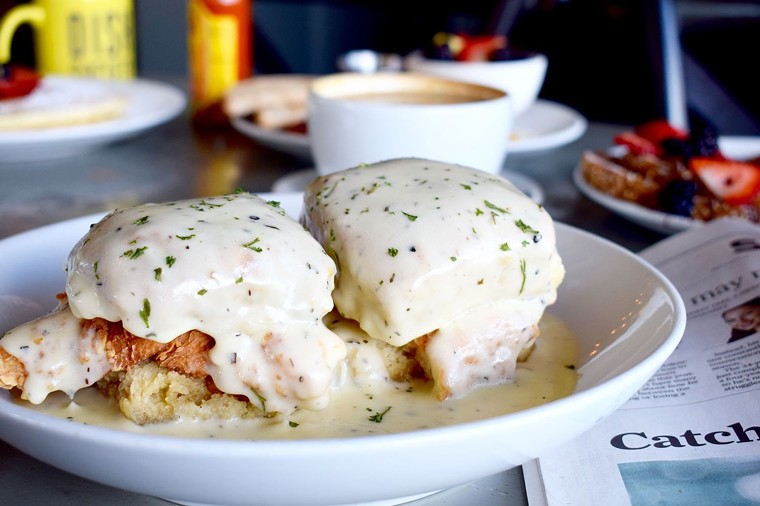 It's all about the gravy.
Photo by Sabrina Miskelly

National Biscuits and Gravy Day is December 14 and in Houston, there's no shortage of eateries in which to satisfy the need for a fluffy, flaky biscuit and creamy gravy. At Dish Society, guests can order the Chicken and Biscuits with two buttermilk biscuits, fried cage-free chicken and its herb-flecked house gravy for $13.25. Or diners can add a biscuit to their meals for $2.50. And House Gravy is also available on the side for $2.50. Dish Society has 6 locations in the Greater Houston area.

The Breakfast Klub, 3711 Travis, has earned quite a reputation for its breakfast offerings over the years and the lines out of the door, most any day, are proof of its consistent quality. Marcus Davis's breakfast and lunch only restaurant just celebrated its 20th anniversary in business. Its Biskits and Gravy ($10.25) is two grilled buttermilk "biskits kovered" with homemade pan sausage gravy. For those who need a little more protein in their morning meal, an order of six wings can be added for $7.99. Do it.

If paying upwards of ten bucks for biscuits and gravy is out of your wheelhouse, Angie's Country Kitchen, 11708 Hempstead, has diner-style prices with a hole-in-the-wall vibe set in a non-descript strip center. Two biscuits with gravy will only set you back $5 but it's best to go with the sausage gravy for one dollar more. A wine dinner makes a great gift.
Photo by Black Door Wine Club
The holiday season brings holiday stress and many of us scramble to find a gift that shows our love. This year, show someone you care with a delicious night out at The Tasting Room, 818 Town & Country Boulevard, which will host its Caymus Wine Dinner December 16 at 7 p.m. Guests can settle in for a luxurious six-course meal from executive chef of Lasco Enterprises, Beto Gutierrez. It starts with Strawberries and Burrata Bruschetta paired with Mer Soleil Reserve Chardonnay, followed by a Smoked Duck Enchilada coupled with Mer Soleil Pinot Noir. The third course is Veal Sweetbreads with Red Schooner Malbec and the fourth is Lamb Agnoletti with Caymus-Suisun Grand Durif. The main course is hearty Porcini Rubbed NY Strip Roast served with Caymus Cabernet Sauvignon. The indulgent meal ends with a Dark Chocolate Torte with vanilla gelato accompanied by Emmolo 'Methode Traditionelle' sparkling wine.

Tamale Festival Houston 2021 has been rescheduled for December 18 from 11 a.m. to 6 p.m. The homage to the steamed masa dish will take place at East River, 100 Bayou and will be bigger and better than ever before in its ten-year-history. There will be multiple East End tamale vendors along with other local kitchens, art displays, craft booths, live musical performances and plenty of activities for kids.

Otaku Food Festival's newest street food fest is a Christmas-themed party at 8th Wonder Brewery, 2202 Dallas. Santa's Big Feast is a free, family-friendly event Saturday, December 18 from noon to 10 p.m. and Sunday, December 19 from noon to 8 p.m. There will be over 30 food vendors selling fare that ranges from Thai to Italian with Korean, Laotian, Japanese, Filipino and Mexican in between. There will be dozens of beer options from 8th Wonder plus live music and plenty of parking.

We are tired of being nice all year for Santa, so it's time to be a little bad. Trash Panda Drinking Club, 4203 Edison, is hosting a Naughty Christmas Party, Tuesday, December 21. The celebration collaboration with Confidential Cocktail Club will have two DJs, signature cocktails and is sponsored by Illegal Mezcal and Codigo 1530 Tequila, two spirits which sometimes lead to naughty behavior, so we have heard.

For those who can't make the Naughty Christmas Party, Trash Panda has launched four new seasonal cocktails that are available anytime. There's The Antidote, a rye whiskey chai latte with oat milk or Camouflage, a brandy hot toddy with chamomile tea to soothe the Christmas stress. There's also the Mulled A.F. (whatever could that mean?) which is a brandy mulled wine with apple juice. For tougher types, the Shmoked Grapefruit Sour is a straight-up, no ice, pistachio mezcal grapefruit sour with egg white. That'll put hair on your chest, toes and even your red nose. 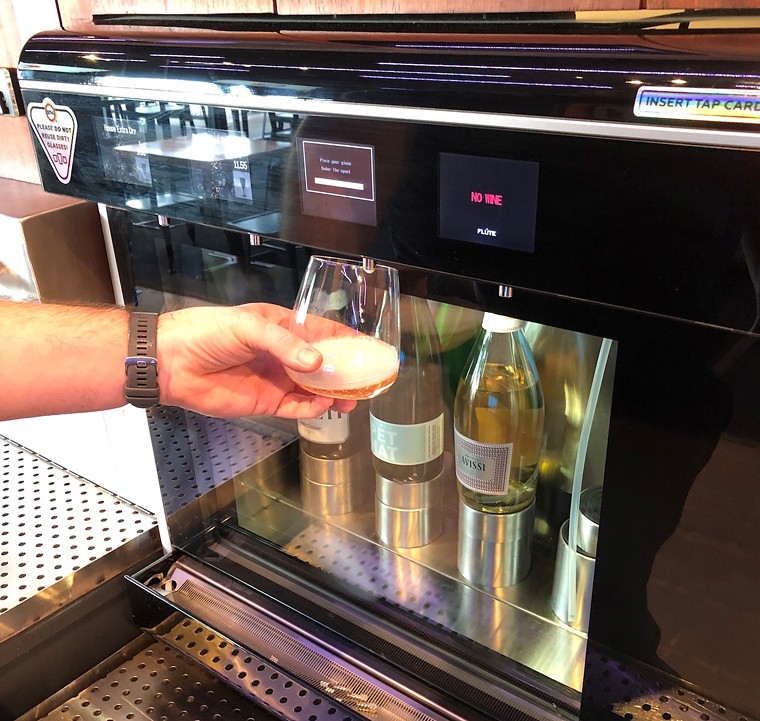 Help yourself to a glass of bubbly.
Photo by Sandra Cook
Shoot the Moon, 8155 Long Point, has now added four fine sparkling wines to its self-serve system just in time for holiday meet-ups with friends. Guests can opt for Szigeti Gruner Veltiner Brut, Field Recording Dry Hop Pet Nat or Venturini Balldini. Those who prefer the pink sparklers can enjoy Avissi Sparkling Rose. The Enomatic machine makes sure each glass of sparkling comes out as bubbly as the first. Besides the new bubbles, Shoot the Moon has over 80 beverage options including beer, wine, spirits and pre-batched cocktails that can be ordered by the ounce for just a taste or by the glass. There is also a small menu of pizzas and shareable plates.
KEEP THE HOUSTON PRESS FREE... Since we started the Houston Press, it has been defined as the free, independent voice of Houston, and we'd like to keep it that way. With local media under siege, it's more important than ever for us to rally support behind funding our local journalism. You can help by participating in our "I Support" program, allowing us to keep offering readers access to our incisive coverage of local news, food and culture with no paywalls.
Make a one-time donation today for as little as $1.