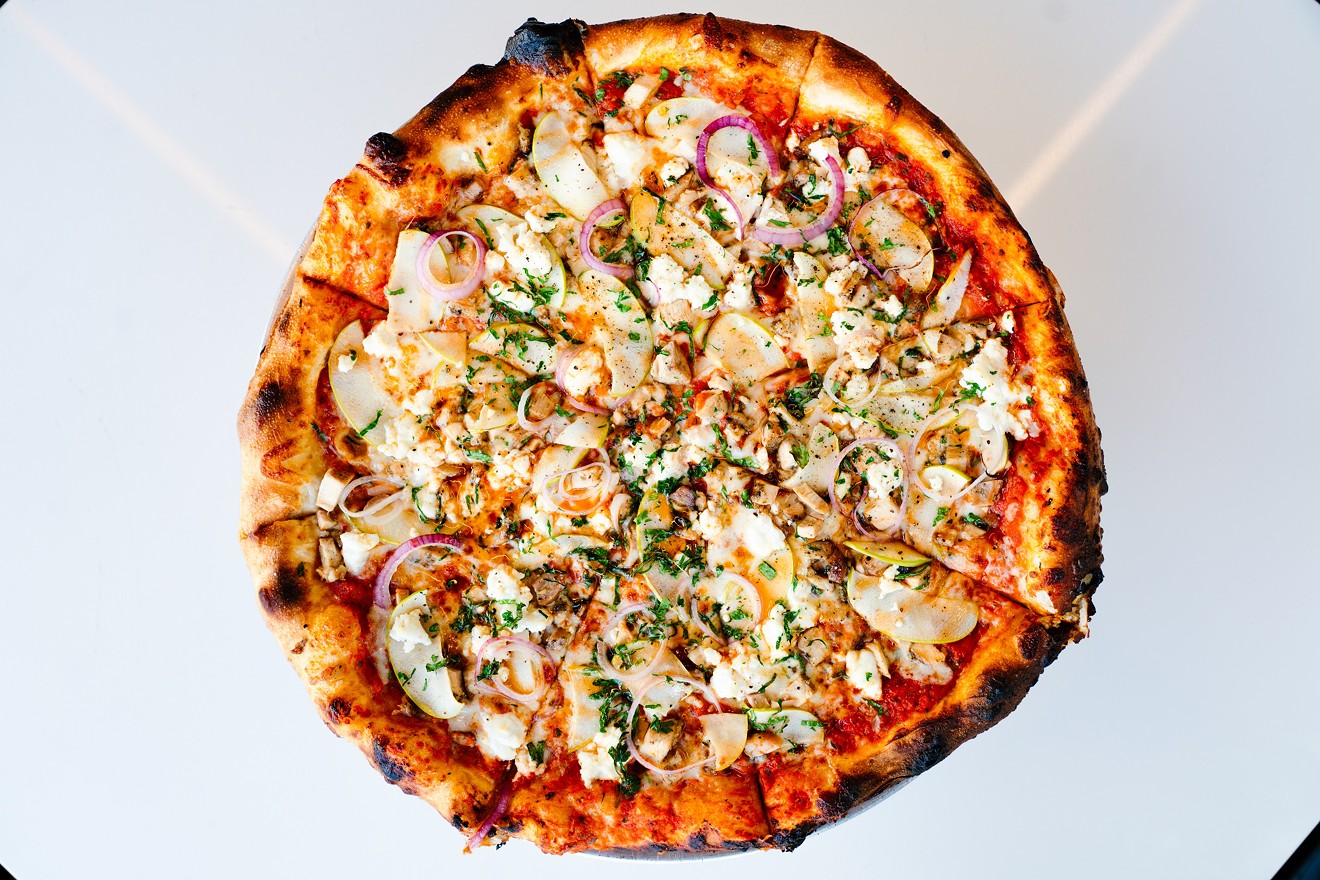 The Houston Dash has drafted an all-star pie available at Vinny's for the month of May. Photo by Mikah Danae
Mark your calendars, because you don’t want to miss these deliciously fun culinary happenings:

From Monday, May 9 through Thursday, May 12, Ouisie’s Table, 3939 San Felipe will be offering a special prix fixe menu featuring dishes from its early years beginning in 1973. The 49th Anniversary Menu features mains such as shrimp and grits, chicken fried steak and parmesan crusted chicken breast, with starters from pecan salad to the signature Ouisie’s spud topped with salmon and caviar. The cost is $35 per person plus tax and gratuity and reservations are encouraged.

Rainbow Lodge, 2011 Ella, will host its next Monthly Wine Tasting on Wednesday, May 11, this time sipping through the grapes of Argentina, from Malbecs paired with Argentine stuffed tortilla to Cabernet Franc with choripan. Cost is $55 for the tasting and paired bites and the tasting runs from 5:30 to 7:30 p.m.

Yaga’s 26th annual Wild Game & BBQ Cook-off will take place at Galveston’s Pier 21, featuring a pregame Sponsor Party with dinner and an open bar from 6 to 11 p.m. on Friday, May 13, followed by the wild game cook-off, live entertainment, silent auction, “Run Wild 5K” and children’s activities on Saturday, May 14. The event benefits the Yaga’s Children’s Fund. Tickets are $100 for Friday’s Sponsor Party (including a raffle ticket) and admission is free on Saturday, with $25 VIP beer tasting tickets available.

Vinny’s Pizza, 1201 St. Emmanuel, has collaborated with the Houston Dash to create a special pizza for the month of May. The Dash Board Banger ($28) – created by Dash stars Allysha Chapman, Lindsey Harris, Michaela Abam and Nichelle Prince on behalf of the team and featuring mesquite grilled chicken, fresh green apple slices, Texas chevre goat cheese, sliced red onion, and a hot honey drizzle – will be available at Vinny’s throughout the month, and Vinny’s will donate 15 percent of each special pie purchase to the Dash charity of choice, Dynamo Charities. To celebrate the charitable collab, Houston Dash players will also host a pizza party for their fans at Vinny’s on Sunday, May 15 from 5 to 9 p.m.

On Tuesday, May 17 from 6 to 8 p,m., Camerata, 1830 Westheimer, will take a virtual trip to Northeast Spain as guests taste through wine flights from the Bierzo wine region of Spain made by Raúl Pérez Pereira. General manager and wine sommelier Elyse Wilson, joined by Pereira’s rep David Salinas of Skurnik Wines, will offer two different wine flights – one with three Bierzo red wines and another with five wines, both red and white, and Camerata will serve appetizer-sized portions of Spanish fare such as savory puff pastry with fillings from the region, Iberico ham, boquerones and Spanish cheeses and meats. Cost is ala carte based on what wines and food is purchased. The event is open to the public and reservations are not required.
KEEP THE HOUSTON PRESS FREE... Since we started the Houston Press, it has been defined as the free, independent voice of Houston, and we'd like to keep it that way. With local media under siege, it's more important than ever for us to rally support behind funding our local journalism. You can help by participating in our "I Support" program, allowing us to keep offering readers access to our incisive coverage of local news, food and culture with no paywalls.
Make a one-time donation today for as little as $1.