Load up on all-you-can-eat sausage during King's Wurstfest. Photo by Philipp Sitter

Mark your calendars, because you don’t want to miss these deliciously fun culinary happenings:

Throughout the entire month of August, Wurstfest is going down at King’s Biergarten, 1329 East Broadway, and King’s BierHaus (Heights and League City), 2044 East T C Jester, 828 FM 646 West, with an impressive 12+ lineup of specialty sausages offered in an all-you-can-eat promotion starting at $9.95. Guests can enjoy flavors from the traditional, like the “Scharfe Kase Wurst” (hot smoked pork and beef sausage with red pepper and cheese), to the exotic and plant-based, including Wild Boar (with blueberries, merlot wine and brown sugar) and Smoked Apple Sage (hickory smoked with Yukon gold potatoes, apples and sage).

French Country Wines, 2433 Bartlett, will host a series of classes dubbed “An Introduction to French Country Wines” for the next ten months, beginning on Thursday, August 8 and repeated on Friday, August 9. Each class will have a different theme – from exploring the wines of different regions to learning all about dessert wines – and will be held from 7 to 9 p.m. on Thursday and Friday. Cost is $48 per person and includes five wines for tasting with cheese pairings. Those attending the class will also receive a ten percent discount off the purchase price of any of the wines discussed. Reservations are required as seating is limited. Call 713-993-9500. 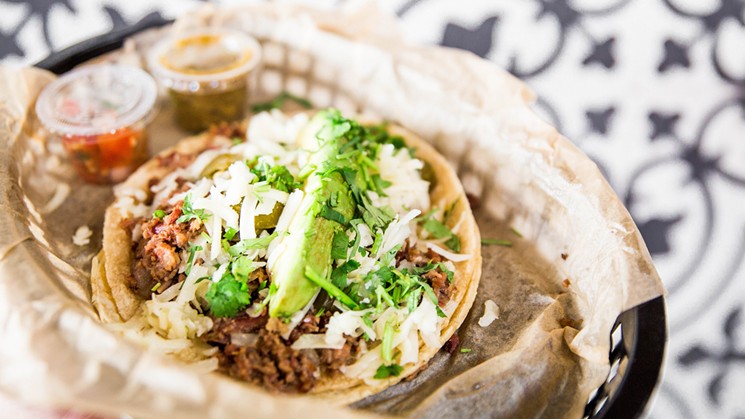 Celebrate Torchy's Tacos newest opening with a night of free tacos.
Photo by Scott Paull
Torchy’s Tacos is just about set to open a new West U restaurant location, 5537 Weslayan and, to celebrate, it’s hosting a grand opening party on Monday, August 12 (note: the actual opening will be on Wednesday, August 14). Guests are invited to join the grand opening party and enjoy free tacos, drinks and entertainment from 5 to 8 p.m.

Kicking off Monday, August 12 and running through Sunday, September 1, Chuy’s is celebrating its 31st annual Green Chile Festival. All Houston-area locations will participate with the exception of the newest location in Bunker Hill. With hatch green chiles in season, these are the only three weeks of the year that you can try Chuy’s limited-time menu items, including its Pork Belly Tacos, Fired Up Steak Enchiladas and Pablo’s Enchiladas smothered in a green chile and poblano pepper cream sauce.
KEEP THE HOUSTON PRESS FREE... Since we started the Houston Press, it has been defined as the free, independent voice of Houston, and we'd like to keep it that way. With local media under siege, it's more important than ever for us to rally support behind funding our local journalism. You can help by participating in our "I Support" program, allowing us to keep offering readers access to our incisive coverage of local news, food and culture with no paywalls.
Make a one-time donation today for as little as $1.