Pass the Tokin Tikka on the left hand side.
Photo by Allie Lesiuk
Velvet Taco's Weekly Feature Taco this week is a nod to that special day, April 20. From April 15 to April 21, the 4/20 taco will be available for those with the munchies. The Tokin Tikka starts with a homemade corn tortilla filled with rotisserie chicken, arugula salad, spicy tikka sauce, raita crema and micro greens. Toss in some hemp seeds and you're feeling good, legally.

There are two Houston locations: 907 Westheimer and 4819 Washington.

Many Americans are finding that their refunds this year have been wildly affected by the new tax laws. The Oceanaire Seafood Room is helping on two accounts: Wine. Discount. With the purchase of two entrees, diners can order wine by the bottle for 50 percent off on April 15. 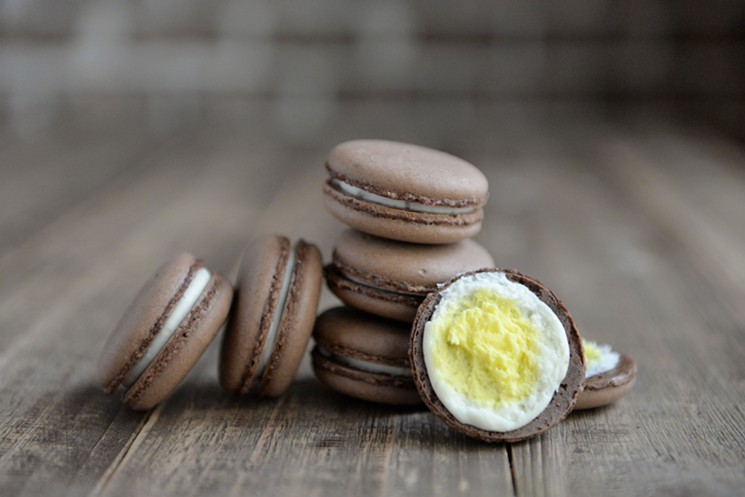 If sweet treats are more your idea of Tax Day comfort, Ooh La La Dessert Boutique is offering one free jumbo cupcake with a minimum purchase of $15 on April 15. That means that you can get a free cupcake for yourself while loading up on Easter cookies, cupcakes and truffles for incoming relatives. There's also a special Cadbury Egg-inspired macaron, apricot orange macarons and sno-ball cupcakes.

While tickets have sold out to the cheffy dinners and events benefiting Southern Smoke's Emergency Relief Fund, there are a number of restaurants around the Houston area that are participating in the citywide event. Each restaurant has created a special steak/ beef dish with donated meat from 44 Farms. The cost of the dish will be donated entirely to the Southern Smoke Emergency Relief Fund which aids employees, staff and vendors in the hospitality and food industry who have experienced crises from natural disasters and other devastating situations.

Some restaurants require reservations, but it is recommended for all. For a complete list of restaurants go to https://southernsmoke.org/events/citywide-steak-nights-sponsored-by-44-farms/

Dave Arnold is taking over the laboratory at UB Preserv.
Photo by Eric Medsker
Bar Takeover with Dave Arnold

Dave Arnold of  Existing Conditions in Greenwich Village, New York, will be taking over the bar at UB Preserv, 1609 Westheimer, as part of Chris Shepherd's Southern Smoke Spring. The mad scientist of mixology will be creating a selection of cocktails that were researched and concocted at his culinary lab, Booker and Dax. Arnold is also the founder and president of the Museum of Food and Drink.

Proceeds will got to Southern Smoke. The takeover lasts from 9 p.m. to 2 a.m. and walk-ins are welcome.

Pappas Bros. Steakhouse, 1200 McKinney, is hosting a wine dinner featuring one of Napa Valley's most historical and important vineyards. Chateau Montelena went through various changes during Prohibition and different owners. Jim Barrett bought the estate in 1972 and at the infamous 1976 Judgment of Paris wine tasting, the Chateau's 1973 Chardonnay beat out other California Chardonnays and (mon Dieu!) French white Burgundies.

The four course meal will start with reception h'or d'oeuvres  followed by pairings like a butter poached monkfish with the 2014 and 2016 Napa Valley Chardonnay, plus a 40 day dry-aged Strube Ranch ribeye with the 2005, 2010, and 2014 Montelena Estate Cabernet Sauvignon, Calistoga.

The event is free, but reservations are a must. To RSVP,  email [email protected]

Riel's chef Ryan Lachaine will be reprising his pop-up " Return of the Dirty Dawg" from last year with some new hot dog creations. Last year's event sold out by 10 p.m. with over 180 hot dogs gobbled up. The weenie fun starts at 8 p.m at Glitter Karaoke, 2621 Milam.

This year's weiners are Riel's Mini Dogs with egg yolk, fried rice and Gochujang, a Deli Dog inspired by Luda's located in Lachaine's hometown of Winnipeg, made with Kraft singles, onions, bacon relish and mustard and the Slaw Dog influenced by The Varsity in Atlanta (where the staff keeps things going by yelling at the customers) which has chili and dirty cole slaw. There is also the Tonkatsu with kewpie mayo, bulldog sauce, pickled cabbage and breadcrumbs.

Chef Kenneth Temple, a native of New Orleans, will serve a four course meal paired with South African wines for Houston Black Restaurant Week. The private chef has cooked for a number of celebrities and athletes, won an episode of the Food Network's "Chopped" in 2017 and is the author of the cookbook, Southern Creole.

The dinner begins at 7 p.m. at Booked Design Space, 1210 Hawthorne. The cost is $100 per person and tickets can be purchased at Eventbrite.

If out of town folks are coming to your house for Easter weekend, take them down to Kemah for some crawfish and zydeco. There will be family-friendly activities, live music, beer and crawfish for sale by the pound.

General Admission is $8 every day for ages 13 and up. Children 12 and under are free. Advance tickets can be purchased through Eventbrite. For Friday and Saturday, the $20 ticket includes admission and 3 pounds of crawfish. On Sunday the $20 ticket includes admission and 6 pounds of mudbugs. Additional crawfish is $3.99 per pound on Friday and Saturday. Easter Sunday, the crawdad price dips to $1.99 per pound with $3 beer and $1 sodas and water.

The festival will be held at the Kemah City Parking Lot at 608 Bradford Avenue.

Prince Week at Lucille's began with Prince-themed wine dinners at Lucille's, now it's time to party on the patio to the tunes of Prince cover band, Antonio Eye and Alien Funkship. There will be a sprawling paella spread included with the $30 admission. Prince-themed cocktails will be available for purchase, so find a designated driver for your little red corvette.

For Easter Sunday, most Houstonians will be feasting with their families at home or at one of the many brunches and dinners around town. Check out our Easter Dining Guide 2019 for more details.
KEEP THE HOUSTON PRESS FREE... Since we started the Houston Press, it has been defined as the free, independent voice of Houston, and we'd like to keep it that way. With local media under siege, it's more important than ever for us to rally support behind funding our local journalism. You can help by participating in our "I Support" program, allowing us to keep offering readers access to our incisive coverage of local news, food and culture with no paywalls.
Make a one-time donation today for as little as $1.