This Week in Houston Food Events: Oysters Galore at Brennan's

Oyster peak season is being celebrated at Brennan's. Photo by Kimberly Park
Here's a look at this week's hottest culinary happenings:

Houston This Is It Opens for MLK Day

This soul food restaurant is one of the oldest African-American owned restaurants in the city, having been founded in 1959. Houston This is It Soul Food, 2712 Blodgett, is normally closed on Monday, but in honor of Dr. Martin Luther King Day, it will be open from 11 a.m. to 6 p.m. serving its comfort food such as oxtails, fried fish, smothered pork chops and more.

Whether you choose to view the Black Heritage Society's 44th Original  MLK Parade downtown or the 28th Annual MLK Grande Parade in Midtown, the restaurant is conveniently located to both for dining afterwards.

According to the restaurant's Facebook page, Dr. King's favorite foods were fried chicken, greens and pecan pie. While pecan pie may not be on the menu currently at Houston This Is It, Dr. King was also very fond of peach cobbler which is on the menu.

Everyone loves the courtyard at Brennan's of Houston, 3300 Smith, and this Tuesday there's even more reason to love it as it hosts Sip & Slurp, from 4p.m. to 7 p.m. Guests can revel in specialty sparkling wines chosen by Wine Guy Rich Carter while slurping oysters, both raw and grilled. Tickets are $45.

Brennan's will also be debuting its Oyster Tasting Menu January 18 through January 23. The five-course meal starts with three premium Gulf Murder Point oysters and three East Coast oysters, followed by Baked Oysters Brennan's. The third course is Pan Seared Sea Bass and Oysters with asparagus risotto and a fourth course is Roasted Bandera Quail with Creole oyster stuffing. The dinner ends with a delicious Bread Pudding Souffle. The cost is $80.

Whatatrash Pop Up at Trash Panda

These trash pandas look ready for a pop-up.
Photo by Lorretta Ruggiero
Trash Panda Drinking Club, 4203 Edison, is hosting a one-day pop-up tribute to Texas' favorite fast food joint, Whataburger, January 18 from  6 p.m. to 2 a.m., or until sold out. There will be four classic Whataburger menu items done Trash Panda's way and a Spiked Dr. Pepper Milkshake made with Maker's Mark bourbon.

Kids can have chicken tenders while adults savor baby back ribs.
Photo by Emily Loving
KP's Kitchen, 700 Town and Country Boulevard, is helping to relieve a little of the financial stress of taking the family out to eat by offering one free kids meal with each adult meal purchased every Tuesday, all day long. Not only is the deal available for dine-in but take-out as well. Kids meal choices include cheeseburger, chicken tenders or grilled cheese, available with fries or chips.

Adults can enjoy dishes from chef/owner Kerry Pauly such as Hot Chicken Sandwich, Grilled Red Snapper and 12 Hour Baby Back Ribs. The restaurant also has a list of wine and beer but guests may also BYOB for a corkage fee of only $5.

Popcorn for a Dollar at Star Cinema Grill 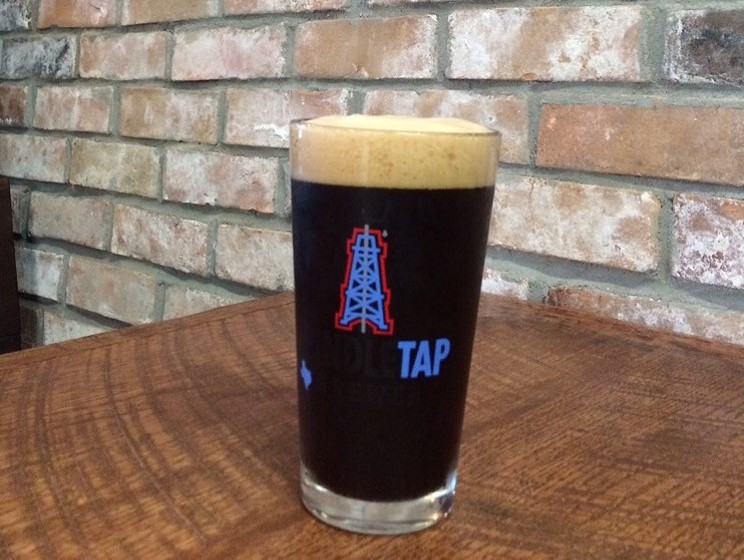 A cold one at Spindletap
Photo by Loretta Ruggiero
This Saturday, National Hot Sauce Day, will be the 6th Annual Hops n' Hot Sauce Festival at Spindletap Brewery, 10622 Hirsch. There will be 65 vendors with samples plus sauces, salsas, jerky, seasonings, popcorn and desserts for purchase plus non-food items as well. And, of course, plenty of Spindletap's brews for sale.

There will be a Little Gnome Zone for kids, children's activities, plus live music, a DJ and food trucks. Attendees can register to win a $250 prize in the Hot Pepper Eating Contest and there will also be its 4th annual Pizza de Muerte Eating Challenge.

Tickets start at $8 for one and go to $28 for a four-pack, plus fees. Beer is not included. Children 12 and under are free. Proceeds from ticket sales and a silent auction will benefit Addi's Faith Foundation, a non-profit that helps families dealing with childhood cancer and to fund pediatric cancer research.

This health-focused eatery is hosting its 9th annual Juice Week from January 17 through January 22 with awards for customers who download the Original ChopShop Chops app for daily surprise juice awards. The "Fuel Your Well-being" campaign will feature daily offers sent each morning that may include Free 16-ounce Caliente kicker Juice, $2 off any juice, double points on any purchase that includes a juice, free upgrade from 16- ounce juice to a 32-ounce and a free 16-ounce juice of choice.

Guests must redeem the surprise rewards each day. The app is available in Google Play or Apple stores. During its Juice Week, stores will also randomly surprise guests with a free 16-ounce juice.

Customers who follow @Original ChopShop on Instagram can enter to win Free Juice for a Year in its Juice Week Sweepstakes and the first 500 entrants will receive an in-app reward for one free 16-ounce juice. The sweepstakes opens on Instagram January 14.

Carrabba's Italian Grill is known for its pastas and from-scratch dishes but its homemade soups are the star of the month with Houston's on again-off again flirt with cold weather. For those fighting seasonal allergies and colds, Mama Mandola's Sicilian Chicken Soup is the cure. Nicknamed "Sicilian Penicillin", it is available as part of the restaurant's lunch specials as is the vegetable-heavy Minestrone and the hearty Sausage & Lentil Soup.

Carrabba's lunch specials run Monday through Friday until 3 p.m. and guests can enjoy the soups as part of its Endless Soup and Salad for $7.99 and its Lunch Trio, which offers a cup of soup, choice of side salad and a lunch portion of Meatballs and Ricotta, Four-Cheese & Sausage Stuffed Mushrooms, Shrimp Scampi, Mozzarella Marinara or fettucine Alfredo for only $9.99.
KEEP THE HOUSTON PRESS FREE... Since we started the Houston Press, it has been defined as the free, independent voice of Houston, and we'd like to keep it that way. With local media under siege, it's more important than ever for us to rally support behind funding our local journalism. You can help by participating in our "I Support" program, allowing us to keep offering readers access to our incisive coverage of local news, food and culture with no paywalls.
Make a one-time donation today for as little as $1.