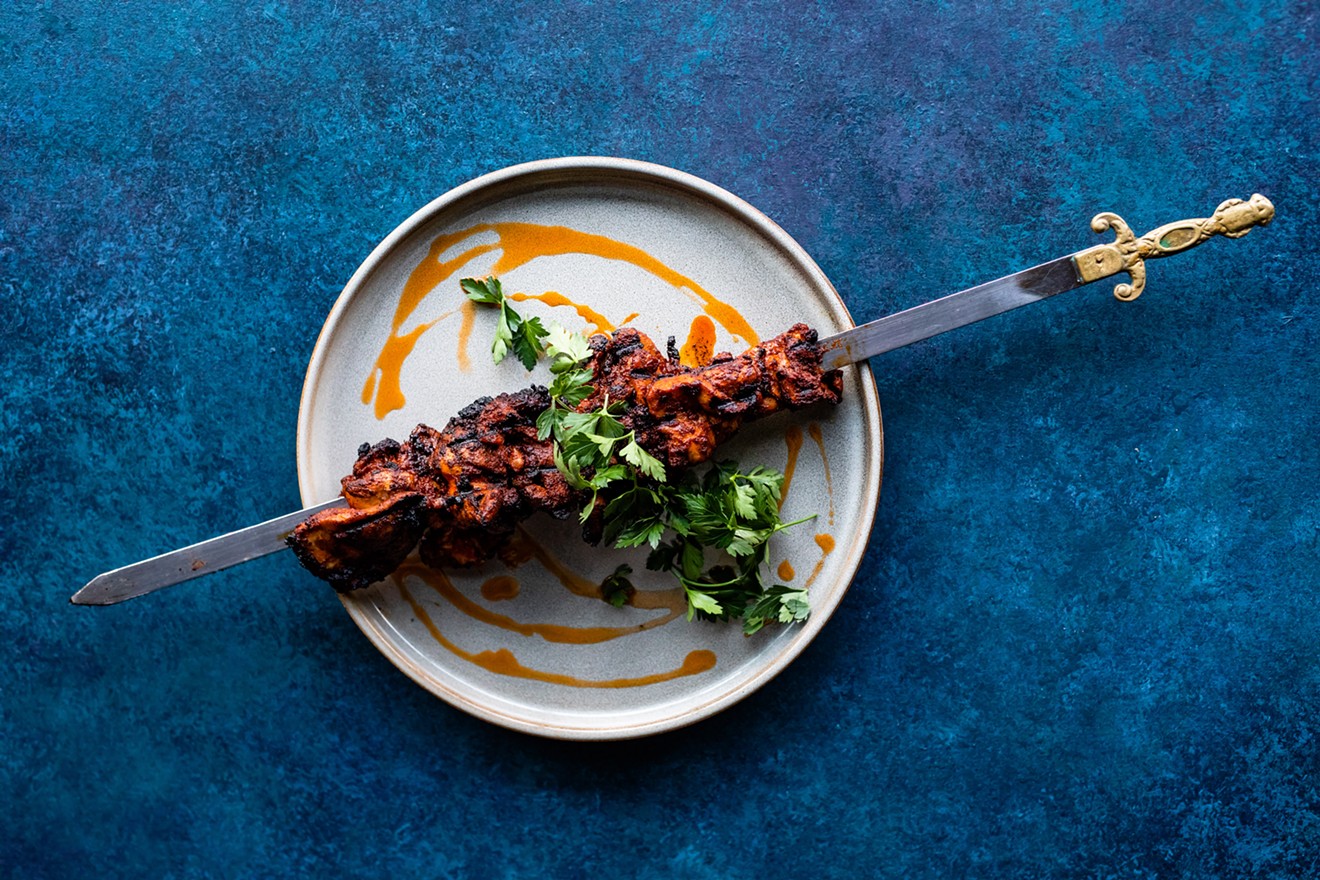 The team behind Doris Metropolitan and Badolina introduce their latest concept Hamsa this week. Photo by Kirsten Gilliam
Here's a look at this week's hottest culinary happenings:

From Monday, May 9 through Thursday, May 12, Ouisie’s Table, 3939 San Felipe will be offering a special prix fixe menu featuring dishes from its early years beginning in 1973. The 49th Anniversary Menu features mains such as shrimp and grits, chicken fried steak and parmesan crusted chicken breast, with starters from pecan salad to the signature Ouisie’s spud topped with salmon and caviar. The cost is $35 per person plus tax and gratuity and reservations are encouraged.

Activation Festival at The Ion

Guests are invited to celebrate the Activation Festival, the official week-long grand opening, of The Ion, 4201 Main, the new urban innovation hub in Houston’s Mid-Main district. Events include Tuesday evening’s Party with a Purpose from 5:30 to 7:30 p.m., featuring a number of Ion-adjacent neighborhood restaurant vendors from historic Third Ward eateries Reggae Hut and LA Burgers and Daiquiris to Ion District restaurant STUFF’d Wings; and a Block Party celebration on Frday from 5:30 to 9 p.m. where you’ll find arcade games, lawn games, hands-on innovation on display from a number of startup companies, live music, food trucks and more. See the full lineup online.

Eight Row Flint, 1039 Yale, has introduced a new Tuesday Night Cooking Series that is an ode to America's favorite pastime, baseball. Each Tuesday, the icehouse will offer two dishes, one from Minute Maid’s ballpark menu and one from the opposing team’s ballpark. This Tuesday features the Astros’ La Pina Dog and a Juicy Lucy from the Minnesota Twins.

Sof Hospitality (Doris Metropolitan, Badolina) will debut its Middle Eastern concept Hamsa at 5555 Morningside in Rice Village. Chef Sash Kurgan has put shared plates as the menu’s focal point, with highlights like eggplant balady, grilled branzino, shakshuka and a variety of hummuses and skewers; and the restaurant will also offer a six-seat “Yalla Yalla” chef’s table featuring a curation of top chef selections and a prime view of the brick oven. The restaurant will be open for lunch and dinner services and offer complimentary valet parking.

Rainbow Lodge, 2011 Ella, will host its next monthly wine tasting this Wednesday, sipping through the grapes of Argentina, from Malbecs paired with Argentine Stuffed Tortilla to Cabernet Franc with choripan. Cost is $55 for the tasting and paired bites and the tasting runs from 5:30 to 7:30 p.m.

Yaga’s 26th annual Wild Game & BBQ Cook-off will take place at Galveston’s Pier 21, featuring a pregame Sponsor Party with dinner and an open bar from 6 to 11 p.m. on Friday, May 13, followed by the wild game cook-off, live entertainment, silent auction, “Run Wild 5K” and children’s activities on Saturday, May 14. The event benefits the Yaga’s Children’s Fund. Tickets are $100 for Friday’s Sponsor Party (including a raffle ticket) and admission is free on Saturday, with $25 VIP beer tasting tickets available.

Vinny’s Pizza, 1201 St. Emmanuel, has collaborated with the Houston Dash to created a special pizza for the month of May. The Dash Board Banger ($28) – created by Dash stars Allysha Chapman, Lindsey Harris, Michaela Abam and Nichelle Prince on behalf of the team and featuring mesquite grilled chicken, fresh green apple slices, Texas chevre goat cheese, sliced red onion, and a hot honey drizzle – will be available at Vinny’s throughout the month, and Vinny’s will donate 15 percent of each special pie purchase to the Dash charity of choice, Dynamo Charities. To celebrate the charitable collab, Houston Dash players will also host a pizza party for their fans at Vinny’s on Sunday, May 15 from 5 to 9 p.m. RSVP online. 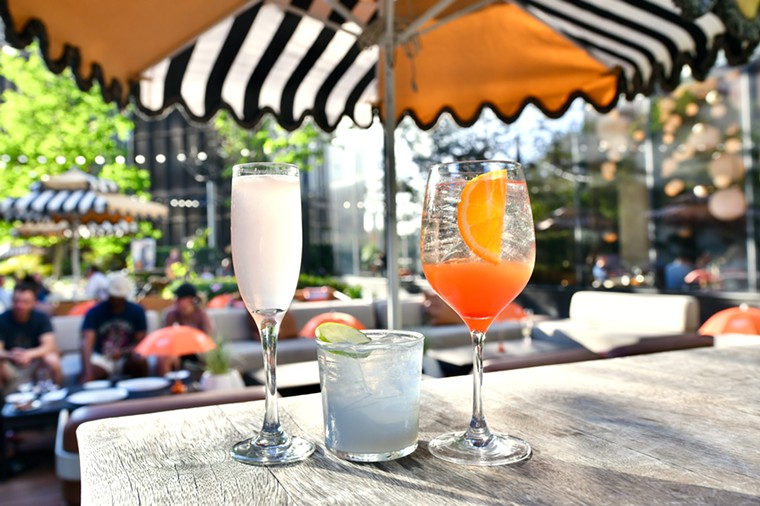 Unwind at the pop-up Italian Spritz Garden on Wednesdays at Rosalie this month.
Photo by Alex Montoya
All month long (May)

This May, during Asian American Pacific Islander Heritage Month, a roundup of restaurants, cafes and food trucks are participating in the second installment of Asian Restaurant Month. The program seeks to create awareness and support of the AAPI community throughout the Greater Houston area, and new this year is a free interactive Asian Restaurant Month Digital Pass powered by Visit Houston for customers to win prizes and swag.

This May, Etoile Cuisine et Bar, 1101-11 Uptown Park , will be raising funds for SEARCH’s House of Tiny Treasures, a nationally-accredited, preschool program that provides developmentally focused early childhood education to children ages two through five. Chef Philippe Verpiand has created two monthly prix-fixe menus, a dinner menu which includes four courses for $65 per person plus tax and gratuity, from which $7 will go to AVDA; and a special brunch menu on Saturday and Sundays, featuring three courses for $36 per person plus tax and gratuity with $4 going to the program for each one sold.

This May, during Lupus Awareness Month, three percent of proceeds from total Tuesday sales from all three Molina’s Cantina locations will be donated to the Foundation. The cause is near to the Molina’s family’s heart, as Mary Molina — the daughter of third-generation Molina’s Cantina owners Roberto and Erica Molina — was diagnosed with lupus in 2020. Research is very much needed, which is why Molina’s Cantina has teamed up with Lupus Foundation of America’s Texas Gulf Coast Chapter to raise money for research and awareness. Guests are invited to come in for Taco Tuesdays to enjoy Tex-Mex plates or raise a glass, all for a great cause; and those who prefer to donate directly can do so online.

Rosalie, 400 Dallas, will introduce its new Italian Spritz Garden every Wednesday from 4 to 7 p.m. through June 1. Patrons can enjoy a rotating Spring drink menu featuring premium craft cocktails, take in live music from local talent and enjoy lawn games, including giant Jenga and cornhole, on the newly renovated green space at Allen Center.
KEEP THE HOUSTON PRESS FREE... Since we started the Houston Press, it has been defined as the free, independent voice of Houston, and we'd like to keep it that way. With local media under siege, it's more important than ever for us to rally support behind funding our local journalism. You can help by participating in our "I Support" program, allowing us to keep offering readers access to our incisive coverage of local news, food and culture with no paywalls.
Make a one-time donation today for as little as $1.