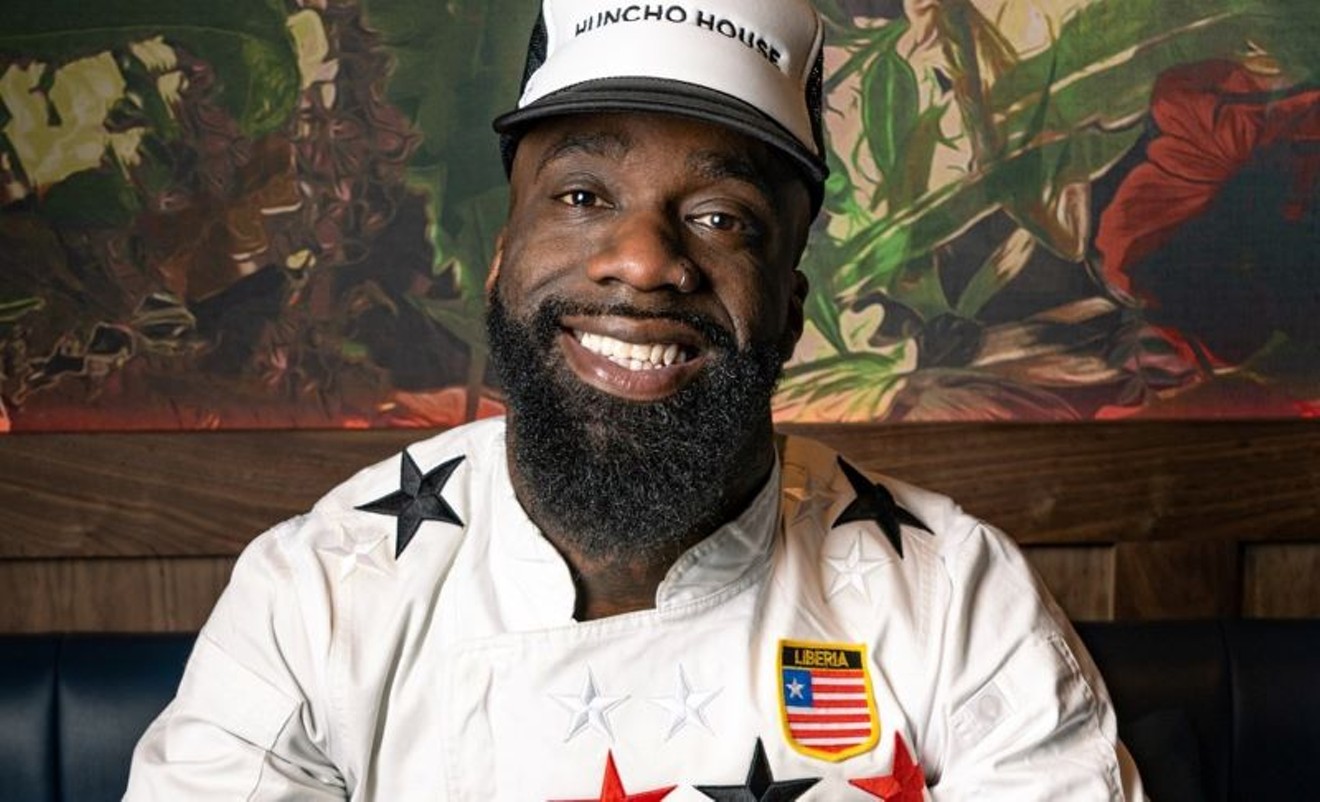 Chef Tobias Dorzon brings his culinary expertise to 1911 Bagby Street. Photo by Thirteen
“Well it was a little bumpy at first,” recalls Rosea Grady as she steps out of the kitchen at Thirteen, through the dinning room, and out to the Bagby Street. As the general manager, a few hours before dinner service usually has Grady running around trying to make sure everything is running smoothly at the restaurant founded by former Houston Rocket James Harden.

After dealing with a year that would shut a lot of other establishments down, Thirteen has hit its stride and the rise is something that Grady enthusiastically welcomes.

“I mean, we opened in the middle of a pandemic. We opened when James was making his move to the Nets. We experienced the winter storm. Overall, it’s been a lot of complications, but it has also been one of the best experiences of my life.”

Thirteen is the brainchild of James Harden, an upscale restaurant that combines the sophistication of fine dining with the flare of night life. Instagram is flooded with pictures of people enjoying food in the dining room, partying on the lounge side, or taking pictures in front of the logo. While Grady manages everything in front of the house, Chef Tobias Dorzon, founder of Miami’s Victory Chef Restaurant, handles the back. The first-generation African born chef grew up watching his Liberian father and for over the last 15 years has honed his skills in Washington DC, Miami, and Italy often displaying his talents on the food network and even earning the opportunity to curate a dinner at the James Beard House.

Thirteen's bartenders bring their training from all over the nation to Houston.
Photo by Thirteen
“My servers come from all over and they are trained to the fullest,” describes Grady as she speaks about why she thinks customers keep returning. “Our bartenders are trained in places like Vegas, Miami, and New York. We’re lucky because they each bring their knowledge and expertise from other places to here.”

As the restaurant comes up on its year anniversary, Thirteen wants to show its appreciation for the support it has received over the past 365 days. On Friday, March 4 the restaurant will be donating $1 from every item sold to HISD food programs. Giving back is not new for the organization as Thirteen has delivered meals and bottled water to Houston schools, held a drive-thru event and gave away 3,000 dinners, and partnered with Adidas to give away $100,000 worth of clothing to families and individuals in need after the winter storm. It’s a testament to Harden’s effort to give back to the city even if some in the city are still upset about his departure.

Chef Dorzon brings his skills from Washington DC and Miami to Houston.
Photo by Thirteen
“When we first opened there were a lot of 1-star ratings by people that hadn’t even been to the restaurant,” says Grady. “It was expected because we know how passionate fans are about the city. But over time people gradually began to see what we were doing and how much we want to support the local community. James wasn’t going to walk away because he is invested in us and the city.  We've always focused on the positive and now we want to show appreciation for all the support we've been given.  Just know we're not stopping so prepare to see even more from Thirteen in the next year.”
KEEP THE HOUSTON PRESS FREE... Since we started the Houston Press, it has been defined as the free, independent voice of Houston, and we'd like to keep it that way. With local media under siege, it's more important than ever for us to rally support behind funding our local journalism. You can help by participating in our "I Support" program, allowing us to keep offering readers access to our incisive coverage of local news, food and culture with no paywalls.
Make a one-time donation today for as little as $1.