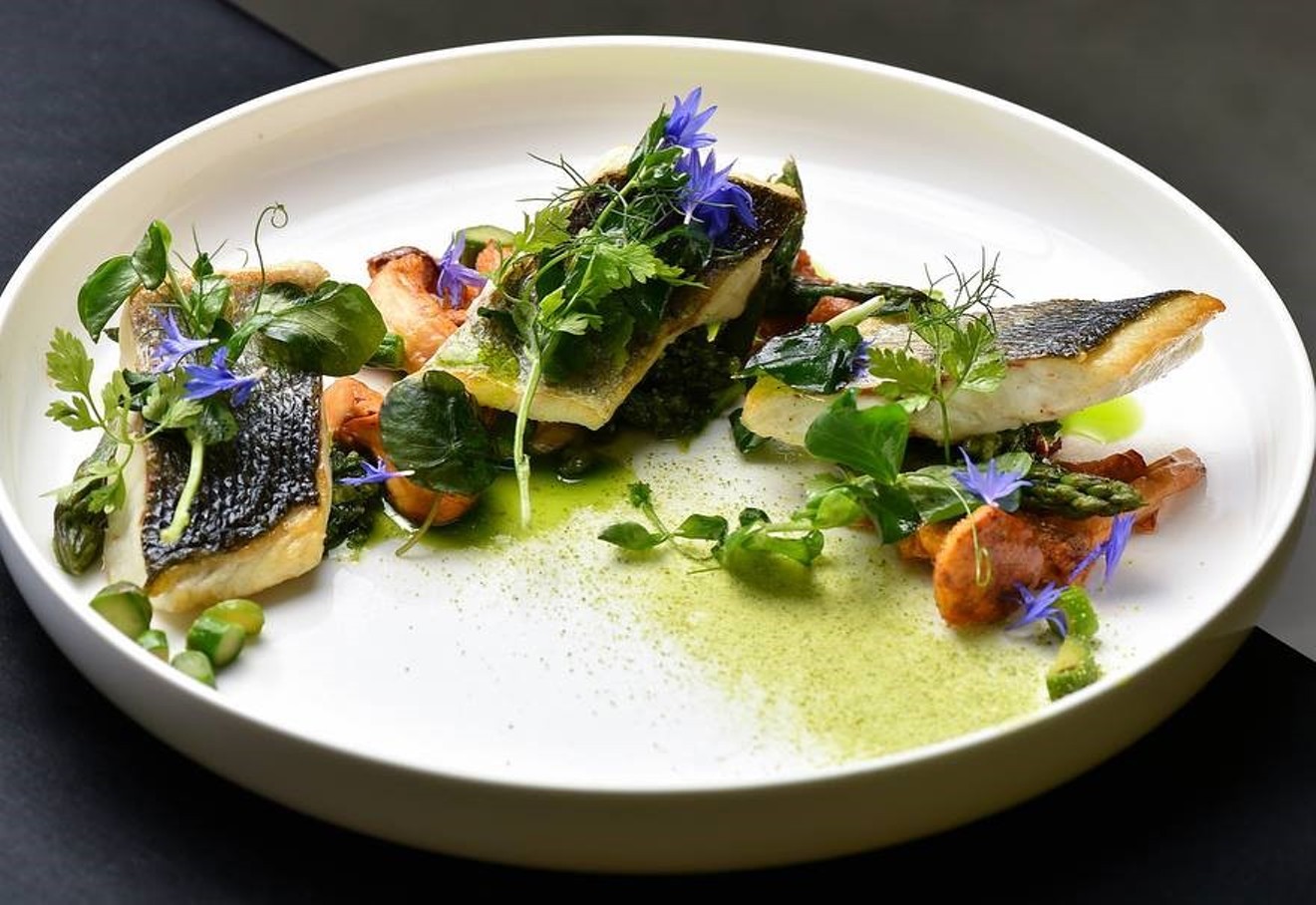 Pan roasted sea bass fit for a prince. Photo by Peter Irman
Mark your calendars, because you don't want to miss these deliciously fun culinary happenings:

Lucille's, 5512 La Branch , is hosting its fourth annual Prince Week to honor the superstar musician, Prince Rogers Nelson. On April 17 and 18, the restaurant will have two wine dinners with Prince fan extraordinaire, Chef Chris Williams, serving 7 courses, 7 bio-dynamic wines at 7 p.m. for $77. Prince really liked the number seven. The dishes will follow Prince's personal diet alternating between pescatarian and vegan dishes. The dinners will be followed by a Prince Party afterwards with DJ Big Reeks. So, dust off your raspberry beret and get ready to party like it's 1999.

On April 19, there will be music from Antonio Eye and Alien Funkship Band. Then, Saturday, April 20, Lucille's will bring the fun outdoors with the Prince and Paella Patio Party with a buffet and live music once again from A.E. and the A.F. Band. Cost is $30 for the food and show. There will be a la carte cocktails inspired by the flamboyant and influential rocker.

Southern Smoke Spring has sold out all tickets to its dinners, but for those who have missed out on the opportunity to feast with Aaron Franklin, Jamie Malone, Chris Cosentino and Jamie Bissonette, the Citywide Steak Night April 16 and 17 will be held at a number of Houston restaurants and will feature donated beef from 44 Farms. Every penny from the sale of the special steak night meals goes to Southern Smoke's Emergency Relief Fund, which helps industry workers and staff who are affected by disasters such as Hurricane Harvey, restaurant fires and more of life's obstacles that can throw a restaurant and its employees for a loop.

Restaurants like Xochi will be serving grilled beef tenderloin with mole Colorado ($38) and UB Preserve takes a playful approach with its Combo No. 88 which includes hot and sour soup, an eggroll and broccoli beef. Indianola will serve a wood-grilled Santa Maria steak ($25). And there's more on this full list.

There will also be the Bar Takeover with Dave Arnold at UB Preserv April 17 from 9 a.m to 2 a.m. The mad scientist of mixology will be creating cocktails from his NYC bar, Existing Conditions and a few other creative concoctions from his lab, Booker and Dax. Walk-ins are welcome and encouraged.

Whole Foods Market, 1700 Post Oak, will present Sierra Nevada Beer and Cheese Tasting April 12.  The cost is $20 and includes six pours and cheese pairings. The event will be hosted by WFM-certified cheese professor, Cody. The tasting is solely for 21 and up. The deadline to register is April 6.

Brews and BBQ will be held at the Deer Lake Pavilion at 715 Camp Strake Road in Conroe from noon to 5 p.m, April 13. The catered BBQ lunch is $10 and the proceeds go to Henry's Horse and Human Sanctuary which is located at Camp Strake. Tickets can be purchased ahead through Eventbrite or purchased at the door.

There will be a mechanical bull for all you urban cowpokes, plus inflatables, pony rides and a performance by the Joe Bailey Band. Alcohol will be available for purchase.

National English Muffin Day is April 23 and to celebrate, Thomas' Breads is literally rolling out its Thomas' English Muffins food truck at various events around the Lone Star State, with a handful of visits in Houston. April 6 will see the food truck at Brunch Run 5K from 7 a.m. to noon. The truck will then make an appearance at the Art Car Sneak Peek at Discovery Green April 11 from 6 p.m. to 10 p.m. and follow-up at the Houston Art Car Parade itself April 13. It will appear again at Discovery Green April 16 from 7 a.m. to 3 p.m. and end its tour at Rice Village on April 23 from 7 a.m. to 3 p.m. to celebrate its special day.

Since 1880, Thomas' English Muffins has made its breakfast bread with its signature "nooks and crannies". The food truck will be handing out some foodie swag while creating English muffin recipes like a Big Texas BBQ sandwich. There will also be an English muffin bar where folks can fill their own nooks and crannies with various toppings such as fruit, guacamole and truffle salt.

Decatur Bar and Pop-up Factory, 2310 Decatur, will feature  LMN Hospitality's Sunday Supper April 14. This is the second in a series of monthly pop ups at the innovative venue. LMN's chefs Brandi Key and Jorge Valencia will create a six course meal inspired by culinary icons, Julia Child and Jacques Pepin. The supper, " An Evening with Julia and Jacques: our cooking heroes seen in a different light" will lean toward the French style of the duo, who were good friends and television co-hosts.

The 30-seat, six-course menu will start with salmon gravlax, salade Nicoise and stuffed artichoke heart, followed by fish meuniere and duck and cabbage. Dessert will be a decadent chocolate pot de creme. The cost is $135 for the dinner and an additional $30 for pairings.

Supper begins at 6:30 p.m. For dietary restrictions, please give 72 hour notice. Questions can be directed to [email protected]

Sno-balls in Houston in April.
Photo by Dragana Harris

Ooh La La, 23920 Westheimer Parkway, will be giving one free jumbo cupcake to customers who spend $15 or more at the shop, April 15. The sweet giveaway will make Tax Day a little less painful. One cupcake per paying customer.

Vanessa O'Donnell's dessert boutique will also feature sno-ball cupcakes, Cadbury Egg macarons and apricot-orange macarons for the month of April. That should get you in the spring spirit.
KEEP THE HOUSTON PRESS FREE... Since we started the Houston Press, it has been defined as the free, independent voice of Houston, and we'd like to keep it that way. With local media under siege, it's more important than ever for us to rally support behind funding our local journalism. You can help by participating in our "I Support" program, allowing us to keep offering readers access to our incisive coverage of local news, food and culture with no paywalls.
Make a one-time donation today for as little as $1.