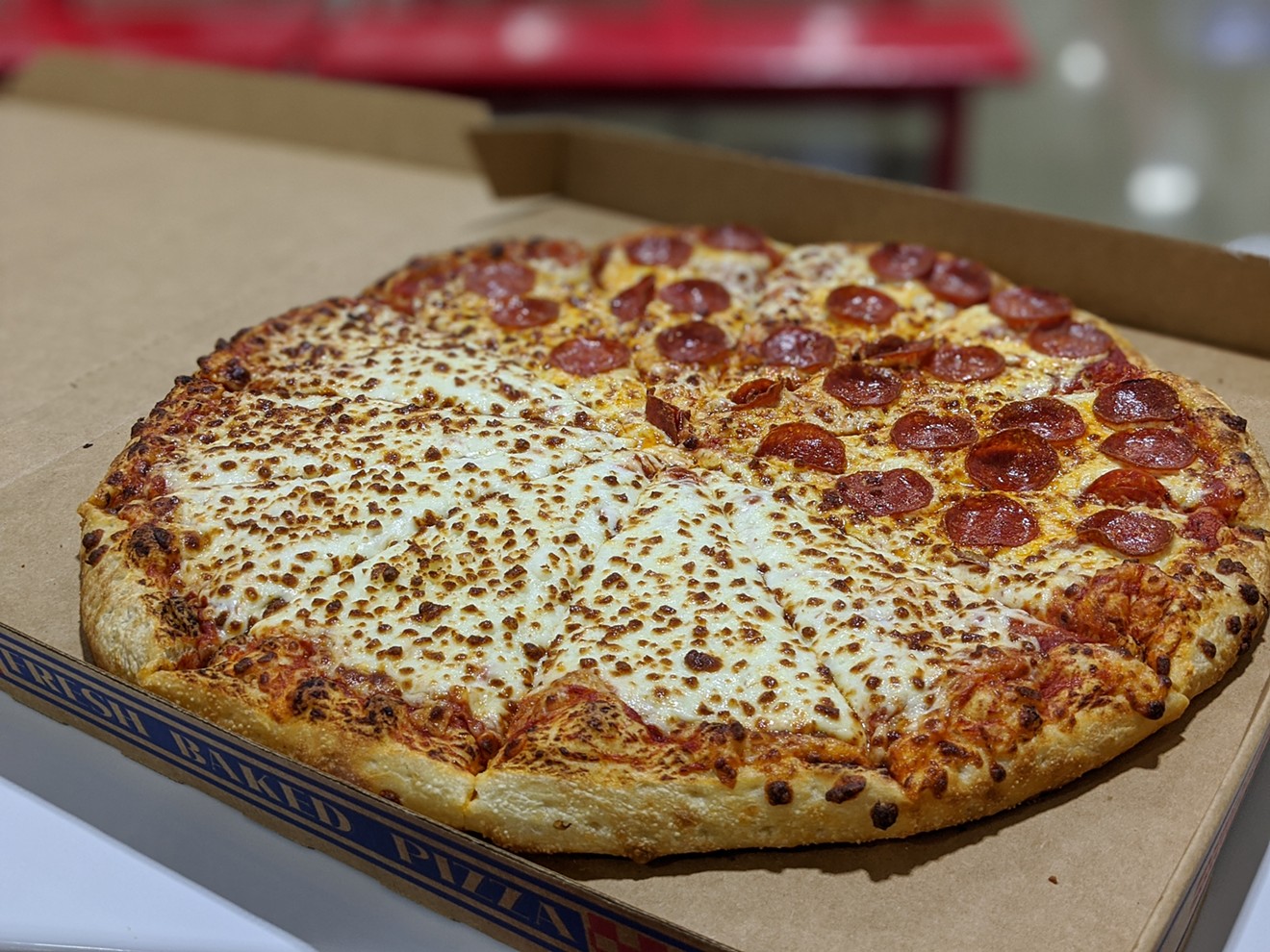 Half pepperoni half cheese from the Pearland Cosco. Photo by Carlos Brandon
My wife and I live alone with a medium-size dog who needs little more than dry food, water, and your endless supply of undivided love and attention. This is to say, we do not need our $60/year Costco membership. We don't need it because two people and a dog don't need 84 bags of oatmeal and four  pounds of shredded cheese — not unless they want to throw away three pounds of shredded cheese and never eat oatmeal again.

We don't need the damn thing, but we have it. Why do you have it, you ask inquisitively. For the food court.

Before you scroll furiously to the comments section, let me assure you that I know what you're going to say. You don't need a Costco membership to eat at the food court. Most Costco stores let you walk right up to the food court without a membership card. While you're at it, you can also buy gas and alcohol without a membership. But you never know when you're going to need a $1,000 patio furniture set or an ATV, and we find it's best to always be prepared. Worth the price at Costco.
Photo by Carlos Brandon
Now, if you've never been to or heard of the late-capitalist wonder that is the Costco food court, allow me to explain. Costco food courts are near-mythical places where one may procure two-foot-long churros for $1, a hot dog and soda for $1.50 and a large 18" pizza for $9.95 — all made by the same brand that manufactured half of my dress shirts.

On paper, $10 for a pizza isn't the craziest deal in the world. After all, Little Caesars famously sells their 14-inch, eight-piece pies for $6 each. The problem is, those pies are trash, and they're tiny. They're tiny cardboard-flavored trash. Try feeding your family with cardboard: you can't.

Costco's pizzas are 18 inches, 12-piece behemoths, they're made to order, and they're good. Heavy on the cheese, heavy on the ronis.
Photo by Carlos Brandon
This column has reviewed some of the finest pizza kitchens in Houston. We've covered James Beard semi-finalists and authentic Italian imports, paper-thin masterpieces and Chicago-style juggernauts. While it would be insane to compare a food court pizza to the offerings of such establishments, the fact remains that for a quick and insanely affordable dinner that feeds a family of four (or a couple for two days) Costco pizzas are a marvel.

Because they're made to order, toppings (while limited) are customizable. Our standard order is a half cheese, half pepperoni. Mozzarella, especially on the cheese side, is added liberally — extremely so. The crust has no defining flavor characteristics beyond the fact that it's serviceable, mildly crispy and eerily consistent. The pepperonis are a crunchy, greasy, unhealthy delight that remind you you didn't go to the gym today. Somehow it all comes together to make a slice that is in no way amazing and in every way perfect.

The truth is, these stripped-down, unapologetically mass-produced pizzas are a refreshing alternative to delivery chains all trying to out-do each other with crust-seasonings and promotional gimmicks — ending up with pies that taste slightly less cardboardy than the next guy. For my money, I'll take a Costco pie over a delivery chain any day of the week and save enough money to throw in a bottle of red or a six-pack.
KEEP THE HOUSTON PRESS FREE... Since we started the Houston Press, it has been defined as the free, independent voice of Houston, and we'd like to keep it that way. With local media under siege, it's more important than ever for us to rally support behind funding our local journalism. You can help by participating in our "I Support" program, allowing us to keep offering readers access to our incisive coverage of local news, food and culture with no paywalls.
Make a one-time donation today for as little as $1.