A slice of pepperoni and Italian sausage from Pink's Pizza. Photo by Carlos Brandon
It's the day after Thanksgiving. Assuming you've heard of the futuristic wonders of the internet and decided to forgo the utter chaos of Black Friday shopping for the blissful convenience of e-commerce — or better yet, have chosen not to partake in our nationalistic expression of compulsive consumerism — you might be staring at a fridge full of leftovers wondering if you can stomach another slice of dry turkey or the smell of sweet potatoes.

Our advice? Save the leftover sandwich for tomorrow. Today, on this most holy of capitalist days, order a damn pizza. It's the American thing to do. And don't just order some ragu-smothered disk of cardboard from the closest delivery conglomerate. Do the right thing and order from Pink's — a local institution with a Houston legacy greasier than Tony Buzbee. Pink's Pizza #3 on Bissonnet in West U.
Photo by Carlos Brandon
Founded in the early 2000s in the Heights, the local chain was recently re-acquired by its founder and successful restaurateur Ken Bridge (Blackbird Izakaya, Ritual, Lola) who previously sold his majority share in 2016. Named for Bridge's late grandfather who gained the nickname "Pink" for his penchant for high stakes street racing, the open-late(ish) pie joint became a beloved respite among the college and bar crowds looking to pad their stomachs with cheap carbs.

Famous for it's affordable and bespoke over-sized slices, as well as signature pies like Hawaii Five O, Big Boss and the Big Sleep, Pink's has been a go-to and growing chain for nearly two decades. Now once again at the helm, Bridge says he plans to grow the company to 50 locations across Texas and beyond in the coming years. 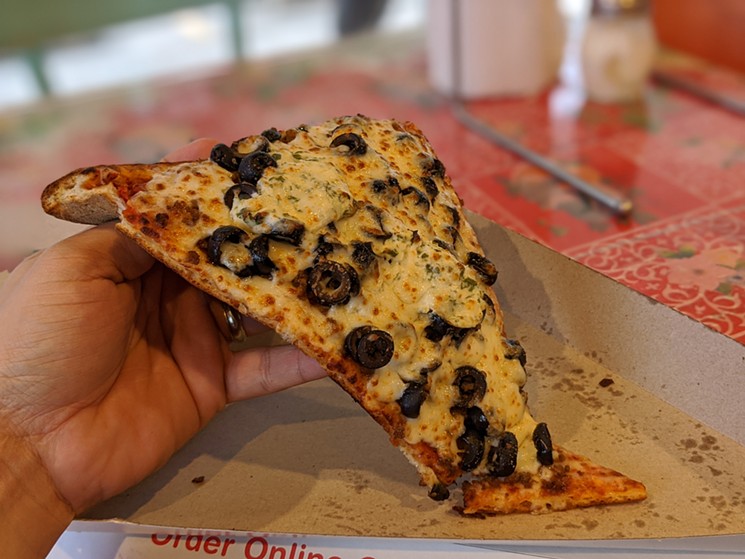 Ground beef, black olives and ricotta cheese from Pink's Pizza
Photo by Carlos Brandon
While delivery is an option — and one we recommend this holiday weekend — I have a soft spot for by-the-slice pie joints. A rarity in our un-walkable commuter city, walk-in counter-service pizza kitchens are something of a culinary gem down south (the good ones even more so). A classic slice of Pink's cheese starts at $3.50 and gets pricier by the topping. Of which there are dozens to choose from.

Pink's is, admittedly, far from a foodie's top choice for best pizza in Houston. While toppings are abundant and the crust is always predictably crunchy (if just a hair too thick), its appeal lies not in some ingredient-focused artisanal charm, but in its unapologetic greasy demeanor. This is fast-food pizza that doesn't suck, a grease-dripping mega slice of cheese and Italian sausage that rings in at under $5 and tastes like sex after a few pints of Guinness.

This is the pie you dream of on the Uber drive home from the bar. It's the pie you want on Super Bowl Sunday or all night video game binge. The pie that erases a week of healthy eating and gym days.

We love Pink's for the same reason we love whiskey and Whataburger. And for those same reasons, we don't eat there every day, lest we may shake this mortal coil a few decades ahead of schedule. No, Pink's is an every now and then indulgence. Which is why you should order it this weekend.

Come on, you know you want to.
KEEP THE HOUSTON PRESS FREE... Since we started the Houston Press, it has been defined as the free, independent voice of Houston, and we'd like to keep it that way. With local media under siege, it's more important than ever for us to rally support behind funding our local journalism. You can help by participating in our "I Support" program, allowing us to keep offering readers access to our incisive coverage of local news, food and culture with no paywalls.
Make a one-time donation today for as little as $1.