The big game is over but not our appetites for party food. Photo by Taylor Oliver

This week is a slim one as far as new restaurants go. The record-breaking and heartbreaking Texas winter storm has caused many established restaurants in the Greater Houston area to close temporarily. Some closed early to keep their employees safe. Others have been forced to close due to power outages, burst pipes and requirements from the City of Houston to boil all water. All of this occurring during the Valentine's Day rush, which is one of the industry's biggest money makers.

Unfortunately, many love birds decided to canoodle at home in front of the fireplace while singletons canceled their Galentine's get-togethers or plans for romantic quests. The unprecedented snowfall and freezing temperatures also ruined Mardi Gras celebrations, another Houston tradition that brings in the extra bucks for restaurants and bars.

So, this week's Openings and Closings only has a few new businesses on the horizon but we thought we would also include some restaurants that are reopening or staying open during these tough times. While we would love to be able to list every restaurant in Houston, this is just a beginning to reignite some hope during what has surely been one of the toughest stretches for Texans in a long while. This information has been provided to us by the restaurants themselves or their spokespersons. Due to the current weather situation, details, opening hours and menu availability are subject to change.

If you have the means to help out our local restaurants and businesses with your patronage, please do. We are all on this crazy journey together. A pandemic and a winter storm in Houston are great excuses for diet fails.
Photo by Taylor Oliver
Walk-On's Sports Bistreaux, 23213 Grand Circle Boulevard, will host a groundbreaking ceremony February 26 beginning at 11 a.m. for its first location in Katy. On hand will be the Walk-On's executive team and local city dignitaries. There will also be some of its fan favorites being served such as its Krispy Kreme Donuts Bread Pudding.

This makes the 16th store in Texas and the second in the Houston area. Franchisee Paul Alfonso said in a press release, "After opening our first Walk-On's in Spring last summer, we couldn't wait to continue our journey with the brand and open another." The Spring restaurant is located at 21930 Kuykendahl.

The Baton Rouge-based sports bar and Cajun restaurant was founded in 2003 by Brandon Landry, co-owner and CEO. It offers a taste of Louisiana with dishes like Crawfish Etouffee, Duck and Andouille Gumbo and specialties like its Mardi Gras Mahi with crawfish mushroom sauce. There is a variety of game-friendly bites such as wings, sliders, po'boys and burgers plus a full bar for frosty beverages. The restaurant is family-friendly as well with a kids menu.

For those staying home, there are party platters with po'boys, wraps, sliders, pasta and salads for take-out. Karma Kolache has gourmet kolaches like the Pepperoni Pizza.
Photo by Peacely Klam
Karma Kolache, 10211 Cypresswood, will celebrate its grand opening March 6 from 6 a.m. to 3 p.m. This is the fifth store for the family-owned kolache and doughnut shop.

It sells a variety of kolaches with regular options like sausage and ham and cheese, plus gourmet and premium choices such as its popular boudin, Philly cheesesteak, smoked brisket, pepperoni pizza, mac and cheese, chorizo and scalloped potato versions. They range in price from $2.29 to $3.99. Macarons are almost too pretty to eat. Not.
Photo by Peacely Klam
Karma also has a wide variety of doughnuts from six for $6 or $9 a dozen.  There are also Kronuts, cinnamon rolls, eclairs and macarons. The shop also sells breakfast sandwiches. For beverages, there are soft drinks, juices and a selection of coffee drinks like its Iced Koffee, lattes and Kappucino.

Check out its Facebook page for info on getting a free kolache. For its grand opening, the first twenty-five customers will receive a free t-shirt. Lamb shank with ouzi is a traditional Jordanian dish.
Photo by Ibrahim Halawa
Abu Omar Halal, 6377 Westheimer, is celebrating its grand opening March 13 from 11 a.m. to 11 p.m. with a complimentary dessert, fresh juice or fruit salad with any purchase. This is the first brick and mortar for the brand which first opened in 2011 as Houston's first halal-based food truck, according to a press release. There are now over 20 locations across the country with more plans for expansion in the coming year. Owner Mohammad Altawaha, aka Abu Omar, hopes to open more brick and mortar locations of the signature concept which features a menu of traditional dishes from Jordan.

Some of the menu items include more familiar dishes like shwarma, kabobs and falafel but also classic, homestyle Jordanian fare such as kabseh, mulukhiyeh and ouzi. These specialties will be offered on a rotating basis as daily specials, offering guests the chance to try unique dishes. The Crunch Fruit Salad looks like our type of salad.
Photo by Ibrahim Halawa
The restaurant will also offer a smoothie and fresh juice menu with flavor options like Ashta, a clotted cream that is common in Middle Eastern desserts.

The restaurant hopes to provide the community and local families with reasonably priced and delicious meals as an experience meant to be enjoyed and shared. Nashville hot chicken adds spice to life.
Photo by Ibrahim Halawa
Clutch City Cluckers, 5550 Val Verde, has moved its grand opening to February 26 through February 28 from 11 a.m. to 11 p.m. The halal food truck serves Nashville hot chicken sandwiches, loaded fries and chicken tenders. For the grand opening weekend, the food truck will offer 50 percent off its entire menu. There will be a raffle for a Playstation 5 and Nintendo Switches for dine-in guests.

Gazelle Cafe, 12126 Westheimer, opened in mid-January. The Moroccan restaurant offers Mediterranean cuisine and high-quality hookah. Dishes like shish kabobs, shwarma, hummus, grape leaves, kebbeh and kafta are on the menu plus falafel, gyros and a variety of pasta. Its freshly made pizzas come out of a Marana Forni oven. The space formerly housed Italian restaurants like Creed which replaced Mascalzone in 2019. Creed closed in March 2020 after pandemic restrictions were put in place and never reopened. However, the large patio and pretty waterfall are still there for outdoor dining and social distancing.


Restaurants Around Town Reopening After the Storm: Neither snow nor ice comes between a Texan and their fajitas.
Photo by Nick De La Torre

Picos is open from 10 a.m. to 9 p.m. serving its full menu for take-out and delivery only.

The restaurant is open from 4 p.m. to 8 p.m. for pick-up and delivery only. Orders can be made online or by phone. The full dinner menu is available excluding lobster rolls and oysters. All Berg Hospitality restaurants are using bottled water and following proper protocols in keeping with the "Boil Water" notice from the City of Houston.

Aaron Bludorn's acclaimed restaurant is open for dinner and dine-in from 5 p.m. to 8:30 p.m.

Brennan's was closed briefly due to power and water issues but it reopens February 19 for dine-in only from 5 p.m to 8 p.m. with a limited menu. 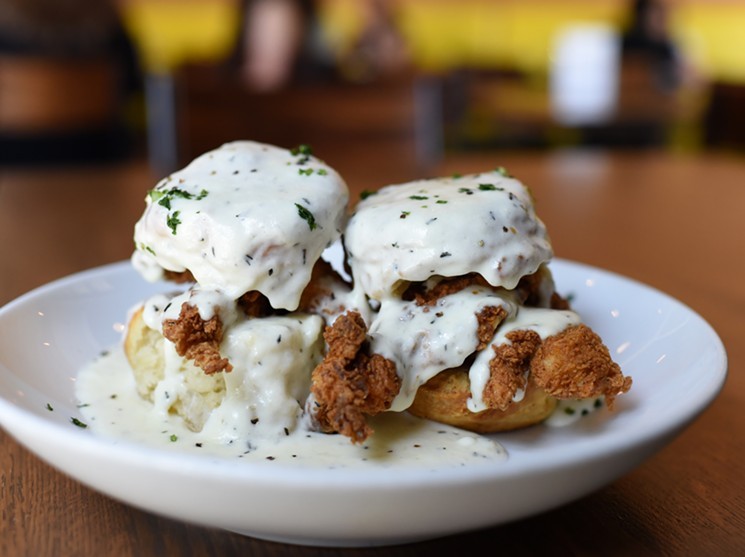 Fried chicken and biscuits will help chase away the wintertime blues.
Photo by Kimberly Park

Four of Dish Society's location will be open with a limited menu, staff and hours. Memorial Green is not currently open for service while the Heights location is offering to-go only. According to a spokesperson, " We will adjust and adapt as the situation evolves."

This Pearland burger joint and tiki bar reopened February 18 after closing for a few days to keep employees safe.

Troy Guard's upscale steakhouse is back open for lunch, dinner and take-away.

Both locations reopened for take-out and delivery only with a limited menu until 8 p.m.

The Fulshear location reopened February 17 and the company is currently trying to get its Bellaire and Westheimer locations reopened after power and water issues.

This opulent Indian restaurant is open from 5 p.m. to 9 p.m. serving its full, creative menu for dine-in and take-out. 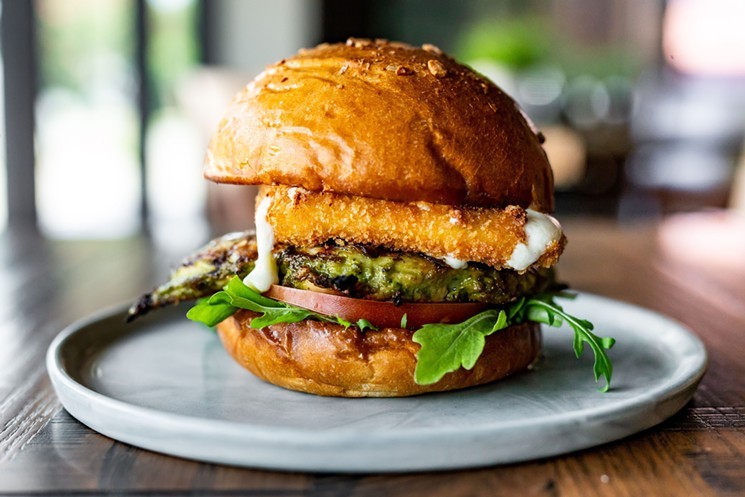 Ryan Lachaine's bistro reopened February 18 for to-go orders beginning at 2 p.m. until food sold out. There is a limited menu with a focus on Lachaine's Louie's Sandwiches or whatever else the team can put together. Check its Facebook page or website for updates.

Reopened February 18 at 4 p.m. for dinner.
KEEP THE HOUSTON PRESS FREE... Since we started the Houston Press, it has been defined as the free, independent voice of Houston, and we'd like to keep it that way. With local media under siege, it's more important than ever for us to rally support behind funding our local journalism. You can help by participating in our "I Support" program, allowing us to keep offering readers access to our incisive coverage of local news, food and culture with no paywalls.
Make a one-time donation today for as little as $1.