Wholesome Kitchen, 250 Assay, will have a grand opening celebration June 6 at Generation Park from 5 p.m. to 9 p.m. The new restaurant and its sister pizza concept, Wholesome Pies, also at 250 Assay, come from the Wholesome Restaurant Group, owned and operated by Michael Collins. Collins is the restaurateur behind some inner loop favorites such as The Fish in Midtown and Bovine & Barley. The new restaurants take Collins out to the northern reaches in the Lake Houston area. Chef Theyen Hoang is the creator and executive chef behind the two concepts. Hoang graduated from the Culinary Institute Lenotre in Houston and also worked as a line cook for Robert Del Grande at Cafe Annie. 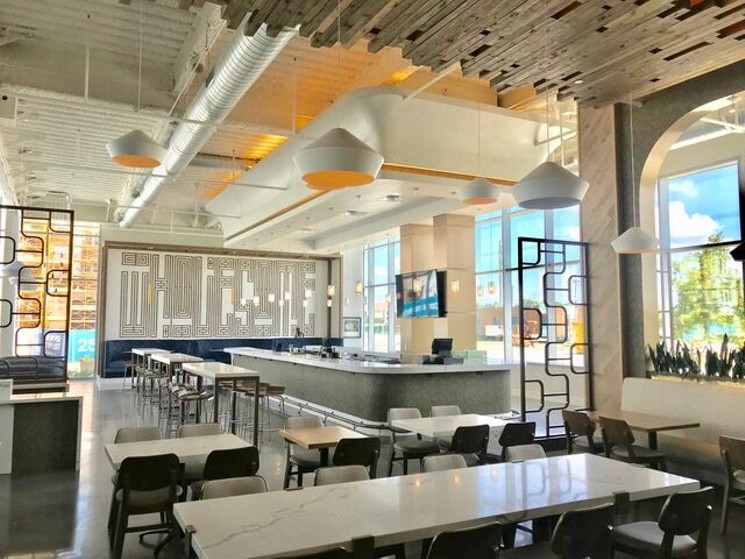 Wholesome Kitchen is modern and bright.
Photo by Mike Charlton Photography
Wholesome Kitchen will offer brunch, lunch and dinner services with dishes created from locally-sourced ingredients. Pan seared salmon, spaghetti carbonara, Asian sticky ribs and fresh burrata offer a glimpse into the restaurant's cuisine. There will also be gluten-free and vegetarian options, plus a bar program of wine, beer and cocktails. 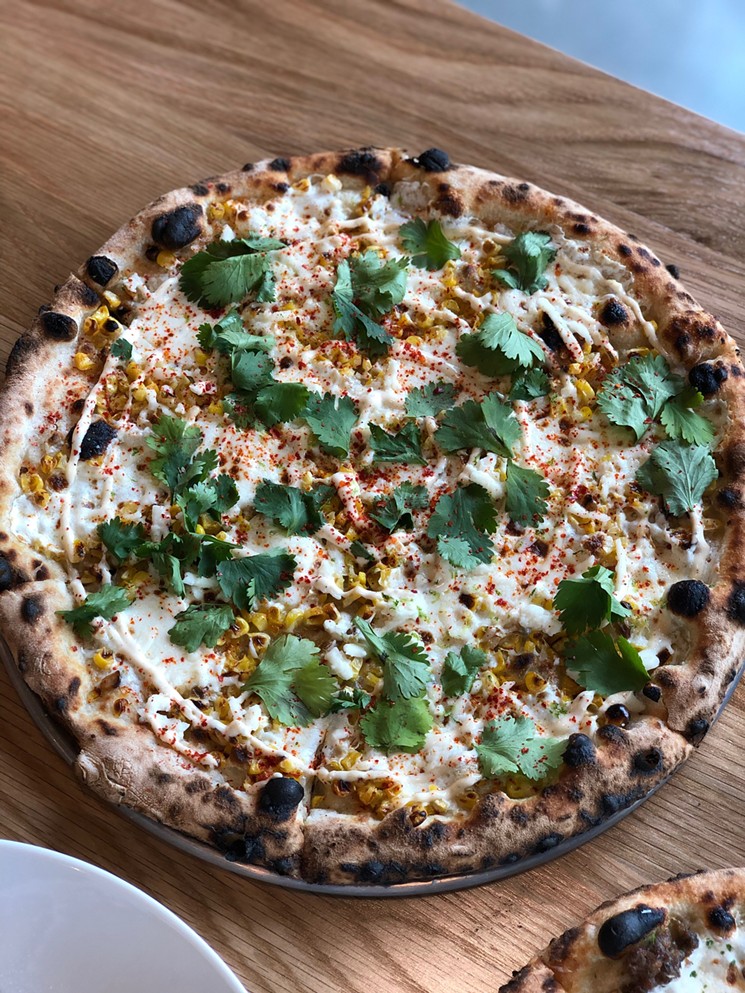 Get elated for elote pizza at Wholesome Pies.
Photo by Mike Charlton Photography
Wholesome Pies, 250 Assay, began its soft opening in early May, with its grand opening set for June 6 in conjunction with Wholesome Kitchen. The 12" Neapolitan pizzas come out of a 900-degree wood-burning oven, with charred crispy crusts. Pizza pie fans can go trad with the Marinara ($10) or get adventurous with the Elote ($14). For over the top carnivores, there's the Meaty Pie ($17). 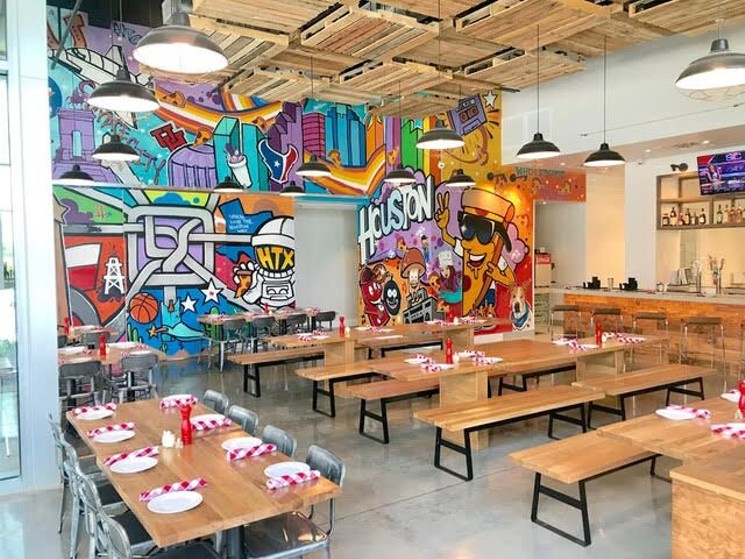 We dig the Houston-themed interior at Wholesome Pies.
Photo by Mike Charlton Photography
The menu is small with primarily pizzas and salads, plus bread pudding for dessert. The restaurant also serves, beer wine and cocktails like the Wood-fired Habanero Rita ($8).

The Houston-themed mural that dominates the 80-seat pizza restaurant's decor was done by Mario E. Figueroa Jr., or as most Houstonians know him, Gonzo247.

Barnaby's, 1936 Fountain View, is now open. According to an employee, the restaurant opened May 28, rather quietly it seems. This makes the ninth location for the Houston cafe. It takes over the gorgeous space that previously housed Eatalia, the Italian food concept from the owners of Romano's Pizza on West Gray, according to CultureMap Houston.

The dog-friendly, gay-friendly and family-friendly cafe is well, just plain friendly. The size of the salads may not be diet-friendly, but they are delicious and meal-worthy. The Chinese Chicken Salad is a favorite and this writer loves the Chicken Mediterranean Salad. There are also burgers, sandwiches, soups and entree plates. While each Barnaby's retains its own character, the pleasant staff seems to be a constant thread. For now, it's lunch and dinner, with breakfast coming soon. The new Barnaby's location also has a bar. Now, that's Lorretta-friendly. 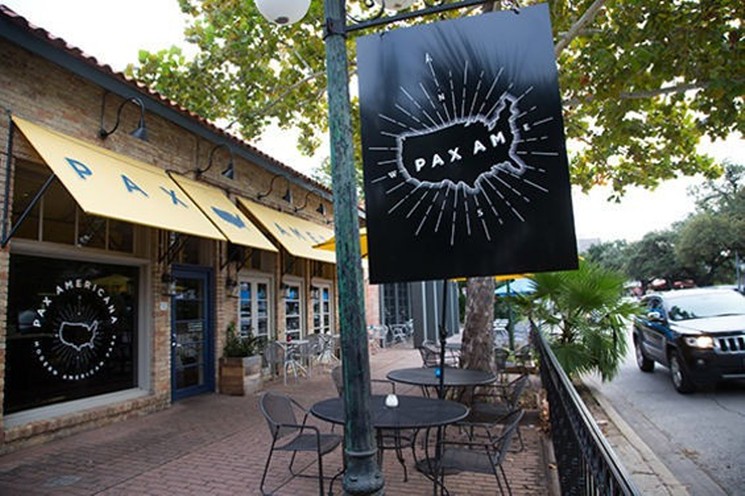 B.B. Lemon will take over the Pax Americana space on Montrose.
Photo by Troy Fields
B.B. Lemon, 4319 Montrose, is shooting for an end of June opening. This will be the second location for the concept from Berg Hospitality Group, right on the heels of the recent news about Benjamin Berg's collaboration with Chef Robert Del Grande to rebrand Cafe Annie. The company also recently transformed Carmelo's into B. B. Italia and B.B. Pizza. The original B.B. Lemon opened in November 2018. Berg Hospitality Group also owns B&B Butchers and Restaurant in Houston and Fort Worth. The Fort Worth crew recently spent the past week catering the Charles Schwab Challenge.

The new location will take over the spot previously occupied by Pax Americana which closed this past January. The 3,000 square feet of space will have a covered patio and sidewalk seating, plus a private room that will be enclosed. Executive chef, Emily Trusler, and Beverage Director, Monique Cioffi-Hernandez will be busy at both locations. Much of the menu at the new restaurant will be the same, but there will be some additions, including more seafood options.


Midnight Munchies Express, 2712 Eldridge Parkway, had its grand opening May 4. The restaurant, owned by Tadrick Tezeno, may sound like a casual stoner joint, but the restaurant is actually fine dining with dishes like bone-in ribeye ($35) and pastas in the $30 to $40 range. The restaurant offers delivery service with DoorDash UberEats, Amazon, and GrubHub. Its opening hours are a bit odd, from 11 a.m. to 7 p.m., then 10 p.m. to 4 a.m. If you're the kind of person who orders fried lobster tails and $15 mac n'cheese in the middle of the night, will you be my friend? Como En Casa is serving up flavors just "like at home".
Photo by Jonathan Vasquez
Como En Casa Authentic Mexican Flavor, 1618 Spencer Highway, opened April 4. This small, casual, family-owned restaurant serves Mexican favorites like fajitas, tacos, gorditas and tamales, but it also features daily specials which range from tacos al pastor to a fried pork chop with poblano cream sauce to barbecue ribs. If your wallet is light and you're fed up with paying $14 for a hamburger at some joints around town, Como En Casa has a Mexican hamburger with an eight-ounce patty, cheddar, pico de gallo, bacon and jalapeno-ranch for a sweet price of $7.99 and it includes french fries, unlike some burger hot spots. The restaurant also serves breakfast, plus menudo ($6.99) on the weekends. There's agua horchata and soft drinks, but alas, no margaritas.

La Lupita Taco Restaurant, 6622 Pinemont, opened May 2. The restaurant serves tacos and quesadillas, but also housemade treats like empanadas, sweet corn bread and flan. We don't know much about this little restaurant, but the Facebook photo of its different salsas had this writer drooling. Add it to the list.

Xun Yu Si Kao, 9889 Bellaire, opened Mid-May in Dun Huang Plaza. The decor is fun, with chairs decorated with photos of Marilyn Monroe and Audrey Hepburn and the dishware has cute kitties on it. The menu itself reads like an art book. The Szechuan restaurant specializes in whole fish dishes and pepper fanatics can get their freak on with a choice of spice level.

P.King Authentic Chinese Food, 3701 S. Shepherd, had its grand opening May 2. The restaurant serves take-out, but also has a contemporary and bright atmosphere for dining in. There are lunch combo specials starting at $9.95 and dinner combos from $11.95. The menu is extensive and includes plenty of vegetarian tofu options, steamed bao, pad Thai, and a wide variety of Chinese dishes. They even have sandwiches made with General Tso's chicken or Mongolian beef. Fresh, colorful and vegan ingredients buoy the menu at Verdine.
Photo by Michael Ma
Verdine, 449 W. 19th, began dinner service this week, which will run Tuesday through Saturday. The plant-based, vegan restaurant began as Stephanie Hoban's food truck, Ripe Cuisine. It rebranded as Verdine and opened its Heights brick and mortar in April 2019. The menu offers vegan specialties like the beet falafel and smoked jackfruit carnitas. Non-vegans can expand their horizons with items like the Waterworks Cheeseburger made with the Beyond Meat patty or the jackfruit-artichoke Krabby Patty. There are french fries and sweet potato fries to keep everyone happy. There's also a selection of local beers, a small wine list and non-alcoholic beverages like lavender lemonade or the locally brewed Kickin' Kombucha.

Phoebe's Kitchen, 2710 N. Mason Road, celebrated its grand opening May 25. The restaurant takes over the space vacated by Aloha Pho. The restaurant serves a variety of reasonably priced seafood including fried and grilled platters ranging from $6.95 to $12.95, plus inexpensive sides like onion rings and french fries ($1.95). There are also dishes like egg rolls, garlic shrimp and several salads.

The Pass and Provisions, 807 Taft, closed May 25. Chefs Terrence Gallivan and Seth Siegel-Gardner posted a Facebook message expressing their appreciation for their loyal patrons, while hinting vaguely at the difficulties of operating a restaurant.  Gallivan and Siegel-Gardner met while working at Maze by Gordon Ramsay and the duo also worked with with Marcus Samuelsson. The Pass made No. 6 on Bon Appetit's Best New Restaurants of 2013 and was a critical favorite among Houston food writers.

Recently the restaurant's website stated that The Pass would be taking the summer off in order to return in the fall with a revitalized menu. There was also the recent departure of executive sous chef Steve Lamborn  who has taken on a new role at Revival Market as chef de cuisine.

Openings Reported for May 2019:

Closings Reported for May 2019:

Cafe Annie, 1800 Post Oak, closed May 17 for renovations
Canopy and WoodBar, 3939 Montrose, closed May 26
The Pass and Provisions, 807 Taft, closed May 25
KEEP THE HOUSTON PRESS FREE... Since we started the Houston Press, it has been defined as the free, independent voice of Houston, and we'd like to keep it that way. With local media under siege, it's more important than ever for us to rally support behind funding our local journalism. You can help by participating in our "I Support" program, allowing us to keep offering readers access to our incisive coverage of local news, food and culture with no paywalls.
Make a one-time donation today for as little as $1.